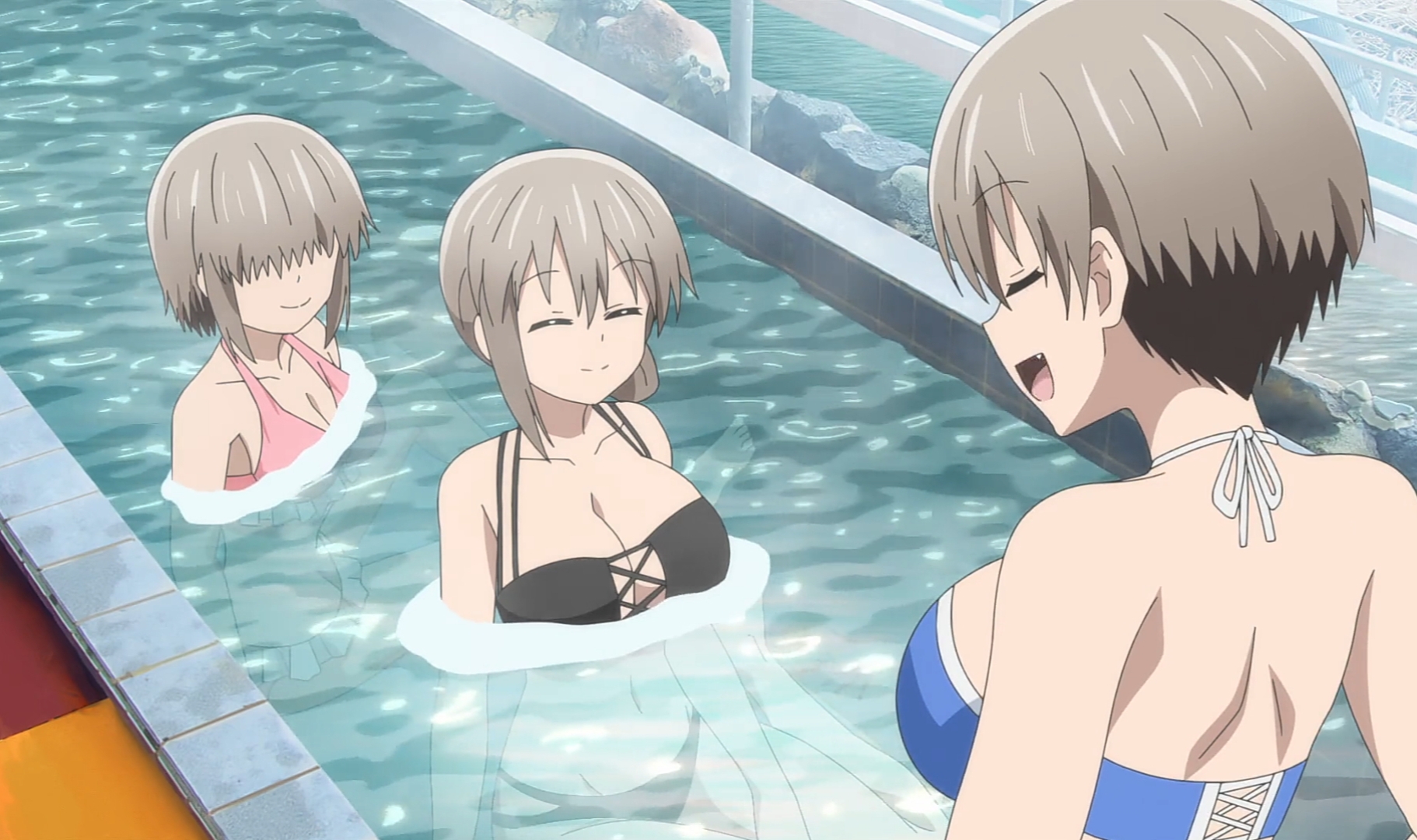 In the ninth episode of ‘Uzaki-chan Wants to Hang Out!’ season 2 titled ‘Fujio Uzaki Wants Family Time!’ the family patriarch of the Uzakis talks with them at the dinner table and shares his plan to take them to a hot spring where they can take bath even in the winter season. The following day, the Uzaki family visits the place and has a great time together. However, when two boys approach his daughters and later his wife, Fujio naturally gets infuriated and a little insecure. While exploring the hot spring later that day, Hana accidentally comes across two of her friends. Here’s everything you need to know about the ending of ‘Uzaki-chan Wants to Hang Out!’ season 2 episode 9. SPOILERS AHEAD!!!

Fujio Uzaki is on a break this Sunday and since Kiri and Yanagi are done with their tests as well, he tells his family that they should go somewhere to relax. When others inquire about the plans he has on his mind, Fujio shows them a popular hot spring where they can go to spend some quality family time together. Kiri suddenly recalls seeing Shinichi naked and has a bad feeling about the whole idea. Therefore, he decides to not go with his family. 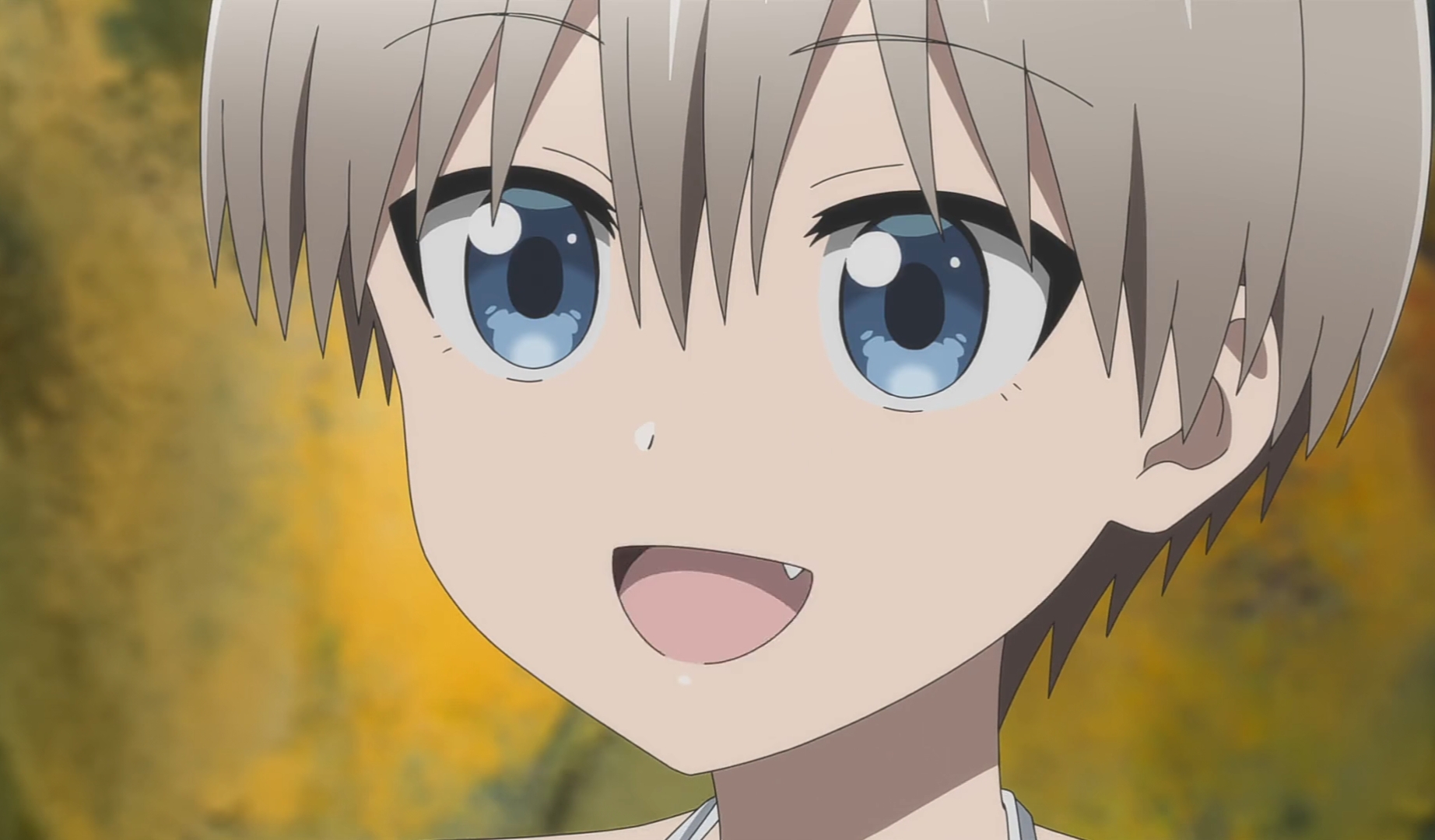 The following Sunday, the rest of the Uzaki family finally visits the hot spring. Meanwhile, Kiri stays home playing with the cats. At the hot spring, Yanagi and Hana are impressed by the interior decoration which is apparently inspired by Roman architecture. They then find various kinds of baths where the family relaxes together.

Hana and Yanagi are later approached by two men when their father is not around. The duo asks for the sisters’ phone numbers when they appear to deflect their initial attempts to spend time with them. Yanagi then makes the excuse that they are in junior high school and suddenly Fujio returns as well. He tells the boys to go away and leave his daughters alone. 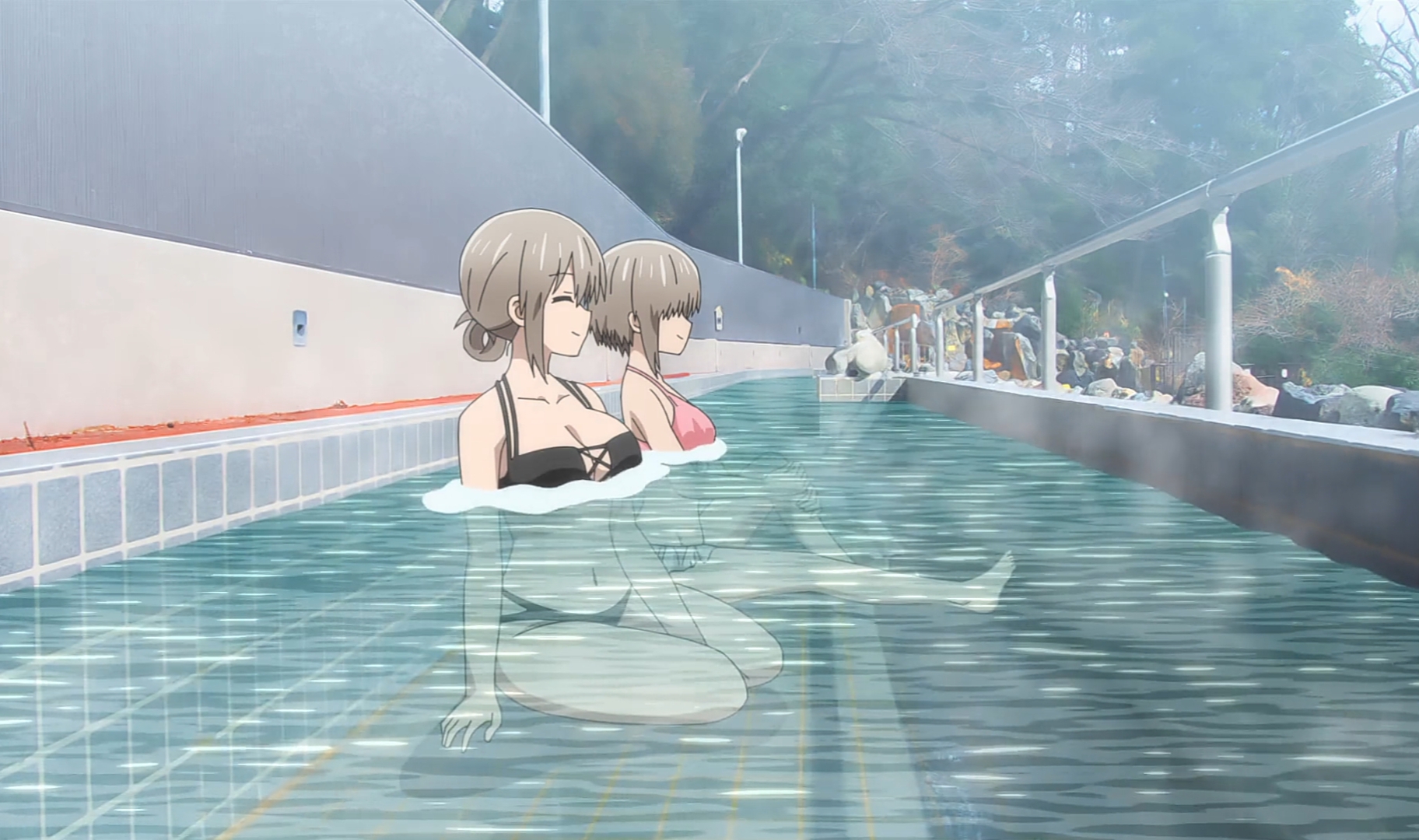 Fujio feels that he has probably made a mistake by bringing Hana and Yanagi there where many men can approach them. To his shock, he finds the same two guys he has shouted at earlier talking to his wife as well and yells at them again. Later that day, Fujio is flocked by a crowd of young men who are impressed by his physique and want to take pictures with him.

Uzaki-chan Wants to Hang Out! Season 2 Episode 9: Who Does Hana Meet at the Hot Spring?

While Fujio Uzaki is flocked by young men asking him about his body and taking pictures with him, Hana tells her mother that she is going to explore the rest of the Hot Spring on her own. She then finds a cave bath nearby and decides to check it out. However, she is shocked to find Sasaki and Shinichi there. After going for an intense swimming session the previous day, Shinichi no longer feels awkward in front of Hana. 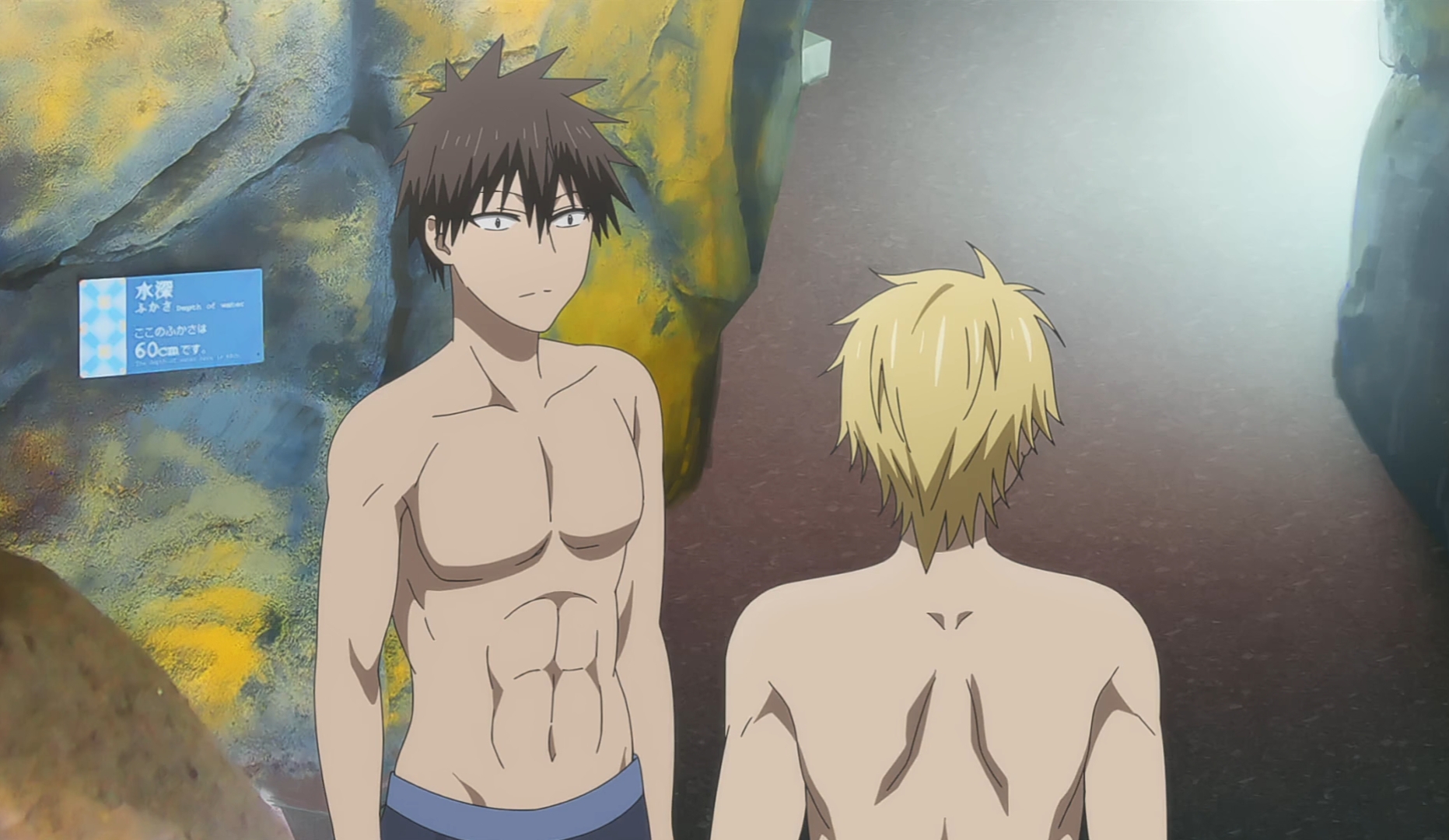 Since he had accidentally told her that she is probably special to him, it had been hard for him to get over the embarrassment of the public confession. However, he now feels a lot more relaxed and feels comfortable talking to her. Since they have accidentally come across each other in the hot spring, Hana and Shinichi feel that Sasaki may have planned the whole thing. But Sasaki defends himself calling everything just a mere coincidence.

Although Hana appears more than happy to spend some time with Shinichi and Sasaki when she tells her friends that she came there with her family they feel that it would be better if she just spends her time with her family instead. Hana listens patiently and agrees with her friends. While she goes back to her mother and sister, Sasaki and Shinichi spend the rest of the day exploring the hot spring.

Why Does Kiri-kun Regret Not Going to the Hot Spring? What Does He Plan For Their Next Visit?

After the Uzaki family returns home from their hot spring day trip, they sit together to discuss their experience. They are soon joined by Kiri, who obviously did not have a good day sitting alone at home. Yanagi tells her brother that there were all kinds of baths there and some people flocked to their father because of his impressive body and even clicked photos with him. Then she goes on to explain how she and Hana were flirted with by two guys who were then chased away by their father. Kiri realizes that the family had a lot of fun and thinks that he could have joined them too. 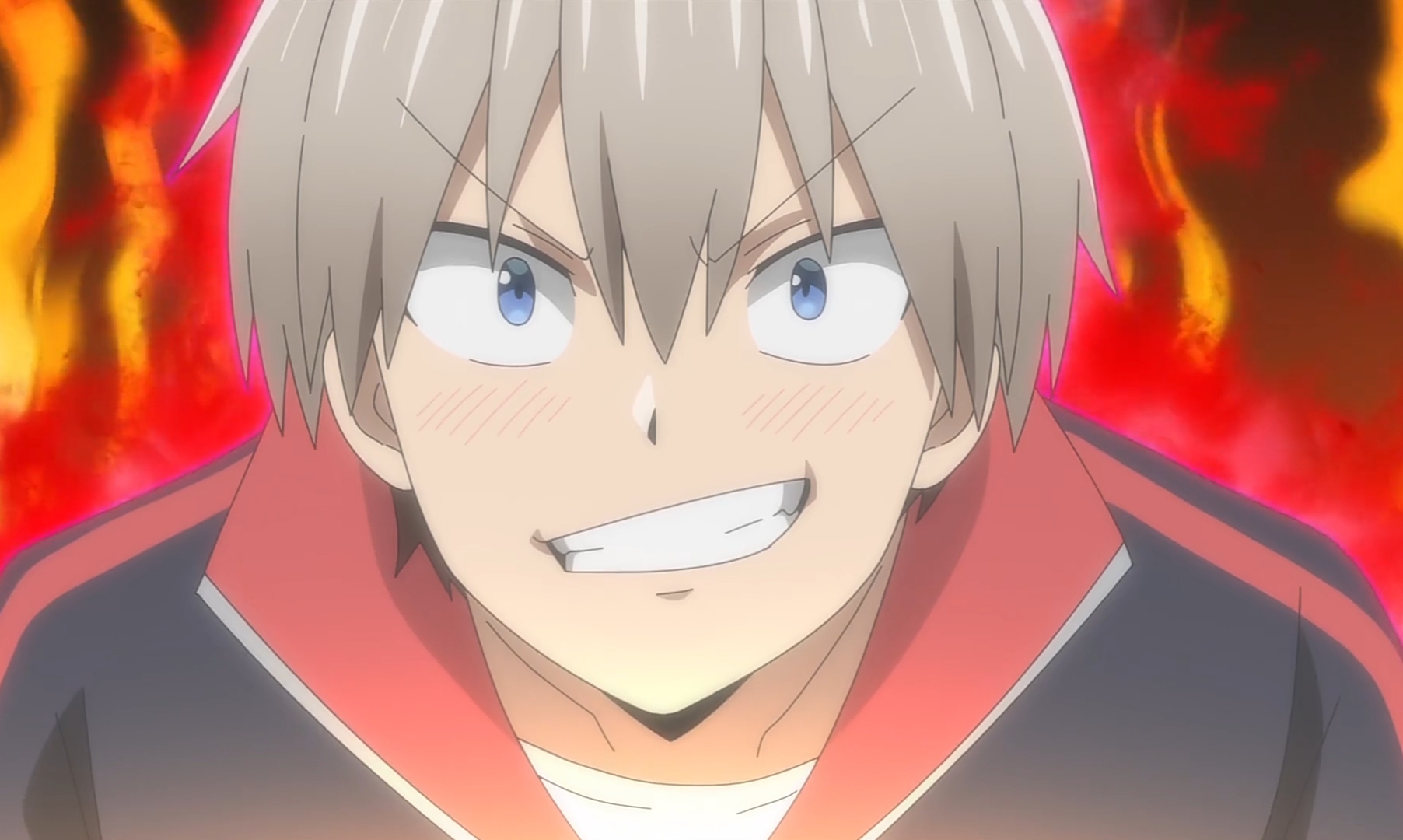 Fujio then talks about his plan to stay overnight near the hot spring on their next visit. Meanwhile, Kiri is making his own plans. He feels that there is a good chance that a college student will flirt with him too if someone approached Yanagi and Hana. Naturally, his sisters are not thrilled by his comments and proceed to slap him immediately. They also mock him that he will never get a girlfriend like this.