Who Are The Virzi Triplets From Floor is Lava? 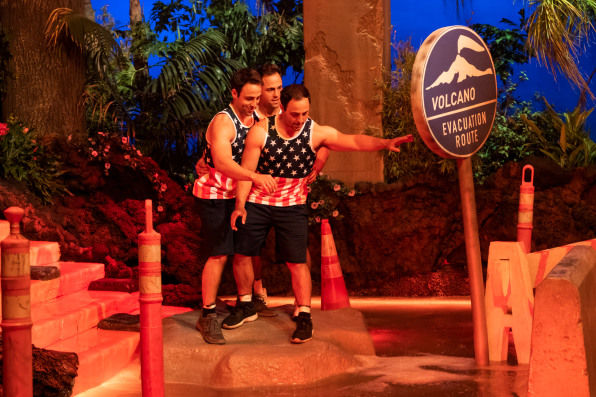 Reminiscent of our childhood, ‘Floor is Lava‘ is a Netflix reality game show series that has taken the initial concept and raised the bar of it really high. Teams of three compete to make it across a gurgling, splashing, lava-filled room, using only the objects available to them in it to get from the entrance to the exit. What they win? An opportunity to meet the host, Rutledge Wood, bragging rights for the rest of their life, and $10,000.

Episode 1 of this series, which premiered on June 19, 2020, gave us three such teams, and one of them was The Virzi Triplets. Wondering who they are and where you might have seen them before? Well, we’ve got you covered.

Who Are The Virzi Triplets?

Identical triplets, Alex, Mitchell, and Sean Virzi are stand-up comedians and reality television stars that are born, raised, and based in Los Angeles, California. The mid-20-year-olds describe themselves as man-children who have been competing with each other from the day they were born, so, they decided that ‘Floor is Lava’ would be a great experience for them as well.

The hilarious men said that the only way to really tell them apart was by their hair. While Sean’s hairline is the farthest back, Mitchell has the poofiest hair, so whoever’s left is Alex. Even though they are the same age and identical, Alex was born first, then came Sean, and then Mitchell, technically making him the youngest.

Who Are The Virzi Triplets’ Family?

According to their Instagram page, the triplets have another brother, named Mike Virzi, who is just 15 months older than them. For Mother’s Day this year, they posted the following picture with the caption: “Happy Mother’s Day to the ? She had 4 boys in 15 months and is the sweetest, most caring person ever. We love you! (One of the very few pics all her boys are smiling for.)”

On their website, the triplets don’t shy away from mentioning how their old school Italian upbringing clashing with their Los Angeles lifestyle has stemmed their comedic roots. Their humor is mostly revolved around them dishing their dirty laundry, talking about their eccentric family, or making jokes about themselves and their unique experiences of being identical triplets.

The comedians play a lot of improv comedy clubs and have found immense success in their field of work. They have toured the country, have been featured on ‘America’s Got Talent,’ and have even made appearances in shows for NBC, ABC, and TBS. Netflix’s ‘Floor is Lava’ is just their latest addition to this list. The Virzi Triplets have a podcast by the name of “Nothing Serious” as well.

Read More: Floor is Lava: Who Was Tim Sullivan?