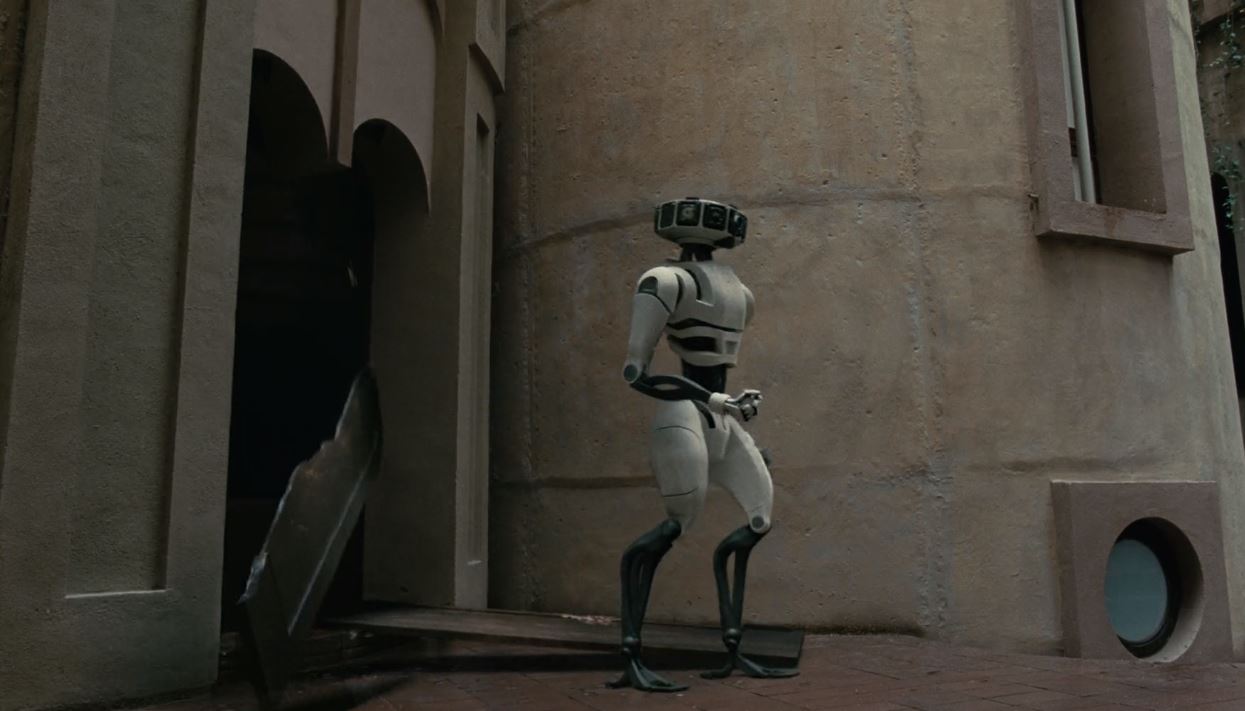 Upon its release, HBO’s ‘Westworld’ was considered by many to be an attempt by the network to provide its viewers with a replacement for ‘Game of Thrones’ which had finished airing its penultimate season that year. However, the science fiction television series by Jonathan Nolan quickly outgrew those comparisons, becoming one of the best of its genre of all time.

Currently in its third season, the densely plotted series has come a long way from its original premise. From the human-like robotic hosts becoming conscious of their reality in a futuristic amusement park in the first season, to a full-blown rebellion in the second installment, ‘Westworld’ now presents a human vs. technology war in full swing.

Welcome to Warworld: a Delos amusement park with the theme of Nazis controlling a quaint European town. Maeve has kidnapped a man. Hector arrives and the two kiss. Maeve tells him that she does not know who she kidnapped and the two decide to escape the place. Hector tells Maeve that they must deliver a map to the Allies. They manage to sneak around a group of Nazi guards in the town square.

Three guards stop Maeve and Hector later. Maeve tries to use her powers to convince the guards to let them go but it does not work. They fight the guards and escape to a plane in a car that Hector has hidden. Hector calls Maeve Isabella and a few moments later, Nazi guards appear outside the plane. Maeve asks Hector to hand the plans to the guards since they would be useless. Hector manages to kill the guards but dies himself. Maeve shoots herself.

She wakes up in a lab. She tries to drill into her head through her nose, but gets stopped by Lee. He tells Maeve that he put her in Warworld since it is close to the Forge, a place where her daughter is.

Bernard arrives Westworld and finds Stubbs. Stubbs is a host and was created to cover Bernard’s tracks and protect him. Bernard wants to stop Dolores and thinks that she kept him alive to keep a check on herself. He now wants to find Maeve.

Maeve wakes up in Warworld again and replays her narrative. This time, she stops the car before it reaches the plane. Hector refuses to overcome his role and join her. Lee arrives and has arranged for horses so Maeve and he can leave. They reach the Forge and Maeve tells Lee that she has never been here. Lee tells Maeve that he thought it was she who sent the hosts to an encrypted place somewhere. Then, Maeve realizes that Dolores locked the Forge behind her.

Lee skeptically asks Maeve if Dolores gave her the coordinates. That is when Maeve realizes that Lee is not alive and that the person in front of her is actually a host meant as a replacement for Lee. She realizes that Warworld and the lab they are in is a construct that they must break out of.

Bernard and Stubbs find Maeve in Westworld’s control center but her central chip is missing from her “brain.” Bernard needs to access a computer linked to the mainframe to be able to find Maeve.

Maeve finds a piece of plagiarized code since human stupidity is only eclipsed by laziness and realizes that this could be her way out.  She throws a tiny sculpture and it freezes in the air momentarily before falling on the ground. Maeve concludes that the system has limited processing power and intends to strain it so Lee and she can escape.

Bernard finds a mainframe computer that says “unit removed” when he searches for Maeve. Then he scans himself to find the corruption in his code installed by Dolores. Meanwhile, Stubbs fights off the guards. Bernard completes the scan and remembers everything.

Maeve wakes up in Warworld at the same spot again. She tells the guards at the town square that Hector has the map. Then, she tells the Nazis that all of them have a map in their pockets. Confused, all of them start shooting each other. Everything except Maeve pauses since she managed to cripple the simulation.

Maeve locates the real control center of Warworld where her central chip is located. She hacks a maintenance drone (see featured image) and commands it to steal her chip. Maeve loses consciousness when the drone steals the chip. The drone escapes the facility, killing the guards in his way but gets shot down outside.

Bernard tells Stubbs that Dolores was obsessed with finding Liam Dempsey and wants to locate him. Stubbs does not want to accompany him but Bernard changes his code to make him come. The two leave Westworld in a boat.

Maeve wakes up and meets a human named Engerraund Serac. He wants Maeve to track and kill Dolores. Maeve tries to kill him, but Serac manages to freeze her using a remote. He tells a frozen Maeve that he might be able to persuade her the next time.

The sci-fi author Philip Dick came up with the Voight-Kampff test to assess whether an individual was a human or a robot. ‘Blade Runner’ fans might be aware of this. Well, after watching the second episode of the third season of ‘Westworld,’ viewers might find themselves wanting to take this test. That is a testament to how brilliant the show is and how easily it can outsmart viewers. It is fortunate that the writers haven’t lost that ability in the third season of the series.

To begin with, the second episode risks the show becoming repetitive with the depiction of another amusement park. However, the writers are two steps ahead of the viewers and the way with which they subvert clichéd expectations is extraordinary. Moreover, the show holding a mirror to society also turns out to be an understatement since the episode seems to easily make the viewers question whether they are living in an illusion: a question that has become philosophical for cyberpunk fans.

The episode is filled with action, suspense and tons of twists. There isn’t a single moment where one is allowed to take their eyes off. Dolores is nowhere to be seen but is never missed for a second. Moreover, the season is shaping up to be better than a conventional technology vs humans story. The positions that Maeve and Bernard find themselves in is extremely interesting since it allows the “robot” characters to have moral complexity: something that is often found to be missing in sci-fi stories of a similar mold.

The production is top-notch, unsurprisingly: not a single frame feels unreal. This review might sound biased, but that is simply because ‘Westworld’ is that good. This has been the perfect show, almost as if it were written by a machine that could do nothing wrong. But the scary part is that ‘Westworld’ makes you believe in that outlandish possibility.