What Happened to Alden on The Walking Dead? Is He Dead?

In its eleven-season run, ‘The Walking Dead‘ has consistently managed to defy expectations with clever twists and surprise character deaths. As the show’s final season begins to gain steam, fans must be sweating over the fates of some of their favorite characters. The third episode reveals the mysterious assailants who ambush Maggie’s group as the Reapers. This incident leads to quite a few fatalities. As a result, a member of Maggie’s team, Alden (Callan McAuliffe), is left with a rather complicated situation at hand, forcing Maggie to make a difficult choice. So what exactly happened to Alden? Allow us to share our two cents on the matter.

What Happened to Alden on The Walking Dead?

Alden is first introduced in the season 8 episode titled ‘The Damned’ as a member of the Saviors. He makes an attempt to escape from the satellite outpost and crosses paths with Maggie. After some initial hostility during the conflict with Militia, he is at odds with Maggie but forms a truce with her. Later, Maggie allows him to join her community, and he becomes one of her most trusted allies.

In the course of the show, Alden has had numerous run-ins with the walkers and has been in near-death situations several times. In fact, in the tenth season, Maggie saves Alden from the Whisperers. But in the show’s eleventh outing, he finds himself in a precarious spot once again. At the beginning of season 11, he sets out on a mission to scour for supplies and food as a part of Maggie’s team. However, after escaping from the subway tunnels in the second episode, the group is attacked by the Reapers. Alden is gravely injured in the altercation, and the group is significantly slowed down due to him. After they take shelter inside a church, Alden requests Maggie to leave him behind.

Initially, Maggie is against leaving Alden behind. However, after much contemplation, she agrees. With a weapon and some food, Alden barricades himself inside the church. As Maggie and Negan head off to complete their mission, that is the last we see of Alden. He has sustained a pretty nasty injury that is making it difficult for him to walk by himself. It does not look like the injury is going to be fatal. However, there are dangers lurking in the woods outside the church, and we’ll have to wait and see if any of those get through to Alden. 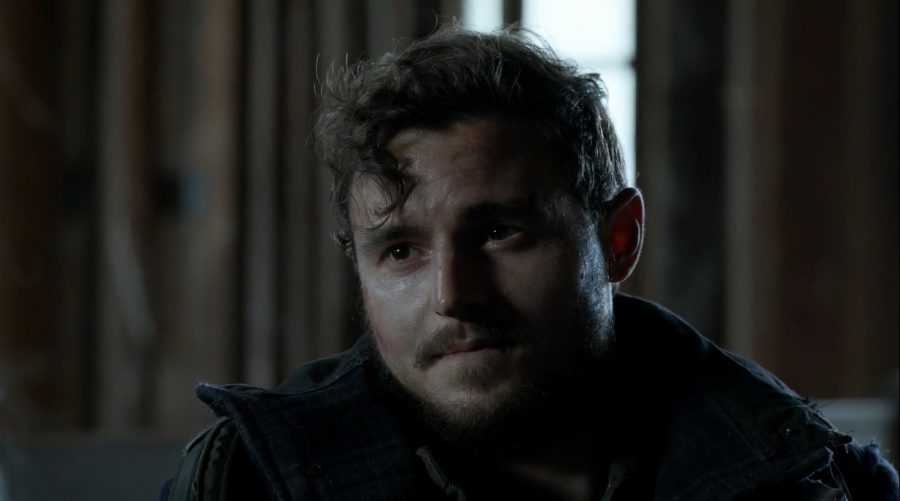 As of now, Alden has managed to survive, but his fate hangs in the balance. With little supplies and practically no means or strength to defend himself against various threats, Alden could perish soon— that is, unless help arrives unexpectedly in some form. There are still some major players missing and characters such as Michonne that are unaccounted for. Daryl is also somewhere out there and could find his way to Alden.

However, taking into consideration the small quantity of food Alden is left with, him lasting until Maggie and Negan return seems like a long shot. Since he is a character who has strong ties to Maggie and a fan-favorite in his own right, it is difficult to imagine that his fate will be decided off-screen. Furthermore, actor Callan McAuliffe who essays the part is billed as a series regular and is expected to appear throughout the final season. Therefore, the future episodes may reveal what becomes of Alden.

Read More: Where Was The Walking Dead Season 11 Filmed?