What Is Eilyn and Ray Jimenez’s Net Worth?

If you have ever been interested in interior design, Netflix’s ‘Designing Miami’ would be right up your alley. The reality show focuses on Eilyn and Ray Jimenez, who plan to be the top interior designers in Miami and worldwide. Although happily married, they head separate design agencies and enjoy healthy competition in the professional sphere.

However, the show also gives us a sneak peek into the couple’s personal lives, and we witness the contrast as the pair strives for success. While Eilyn and Ray’s interesting professional relationship increased the curiosity surrounding their lives, fans have been interested in knowing what their present net worth might be. Well, fret not because we come bearing answers!

How Did Eilyn and Ray Jimenez Earn Their Money?

Despite having aspirations of being an attorney, Eilyn Jimenez pursued a business course from the Universidad Latina de Costa Rica after graduating high school. Yet, during her second year, she got familiar with architecture studies and soon realized that it was more her forte. Nevertheless, after switching streams to architecture, Eilyn focused more on a building’s interior design than what it would look like on the exterior. Soon after, she discovered her passion for interior design and understood it was her one true calling.

On the other hand, Ray Jimenez pursued two Bachelor of Fine Arts courses in Interior Design from Miami Dade College and The Art Institutes before turning his passion into his profession. Interestingly, while still at the latter, he worked at Domus Design Studio as a project manager and designer before proceeding to intern at the TSAO Design Group. Right after graduation, Ray joined the Avant Design Group as a project manager and an interior designer but eventually realized the agency would not give him much chance of growth. 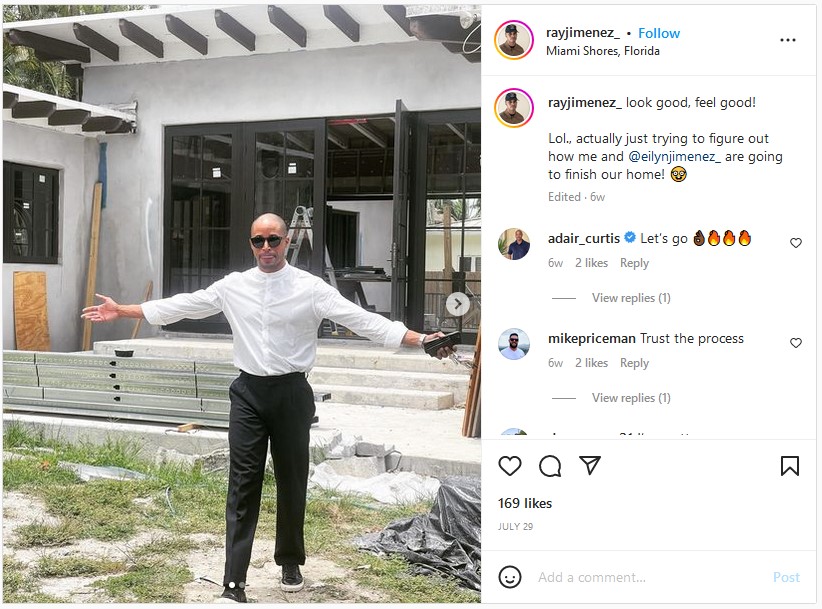 In May 2010, Ray quit his job before co-founding RS3 Designs alongside Shannon Scott. There, he fulfilled the role of an interior designer, but the reality star always wanted to start an agency of his own. Thus, even though Ray’s interior design agency, Raymond Nicolas, was established in May 2021, he quit his job at RS3 Designs in June 2022 and took on the responsibilities of a Creative Director at his company. Besides, readers should note that apart from owning their individual firms, the husband and wife own a house in Miami Shores, which is worth around half a million dollars.

Eilyn and Ray Jimenez’s Net Worth

Despite an interior designer’s salary being based on the number of projects they can tackle in a year, a top-rung professional in Miami earns around $55,000 to $60,000 annually. Furthermore, since Eilyn and Ray work for celebrity clients at times and even take on multiple projects simultaneously, we can expect their income to be more in the range of $70,000 per year. Therefore, the annual income, ownership of their respective agencies, the Miami Shores house, and their current status as reality TV stars make us believe that Eilyn and Ray Jimenez have a combined net worth of about $2 million.