What is Max Ehrich’s Net Worth?

Born to Bruce Ehrich and Rhonda Ehrich in 1991, Max Ehrich is an actor, singer, and dancer. He was interested in the film industry from a very young age and made his debut in 2004 when he was not even 14. His promising debut opened new opportunities for him, and Max never looked back. From then on, the actor has made several appearances in different television shows and films. Although Max was already famous, he started getting even more media attention when he began dating Demi Lovato in 2020.

The couple got engaged in July 2020, and it seemed that they would soon tie the knot. But just two months later, it was reported that they broke off their engagement and are no longer with each other. Despite the ups and downs in his personal life, Max continues to work in the entertainment industry. Thanks to his early debut, he now has a lot of experience, which helps him earn a decent amount of money. Over the years, his net worth has inflated but before we get to that, let’s have a look at his career so far.

How Did Max Ehrich Make His Money?

While he was in middle school, Max Ehrich made his acting debut in the short film ‘One Easy Job.’ Although the movie was not a full-length feature, it gave Max exposure at a very young age which helped him later in his career. He then appeared in a supporting role as a principal dancer in the hit Disney film, ‘High School Musical 3: Senior Year.’ His acting roles in movies helped him fetch his television debut role in 2008 when he essayed the role of Randy in the comedy-drama series ‘Ugly Betty.’ 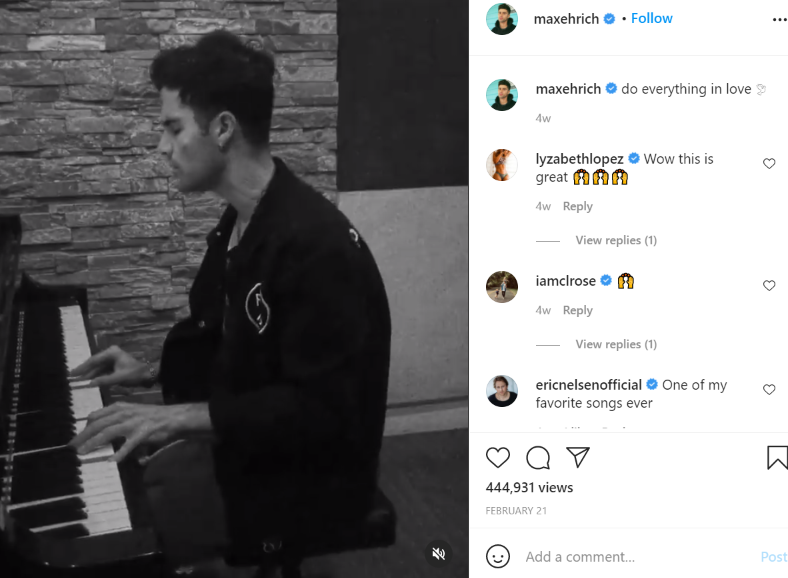 After his cameo in ‘Ugly Betty,’ Max appeared in the television film ‘The Pregnancy Pact.’ He then acted in the sitcom ‘Working Class’ and the television movie ‘iStart A Fan War,’ in which he portrayed Adam. In 2012, Max essayed the role of Fenmore Baldwin in the soap opera ‘The Young and the Restless,’ which earned him a total of four Daytime Emmy Award nominations.

Max was also part of the CBS mystery drama series ‘Under the Dome,’ while also making an appearance in one of the episodes of ‘Law & Order: Special Victims Unit.’ He has also acted in the comedy series ‘100 Things to Do Before High School,’ and appeared in three episodes each of ‘The Path’ and ‘Sweet/Vicious.’ In 2019, Max starred in Netflix Original film ‘Walk. Ride. Rodeo.’ and has a recurring role in the comedy-drama series ‘American Princess.’

Apart from being an actor and dancer, Max is also a talented singer. Some of his songs include “Ride,” “Afraid,” and “Somebody Else.” His career in the entertainment industry has been gratifying, and he has earned a significant amount of money in the process. Now that we have an overview of his career so far let’s look at his net worth.

Max Ehrich has an estimated net worth of around $2 million. Since he has been grabbing headlines lately and has an impressive overall resume, we can expect to watch him in more films and television shows in the coming years. Therefore, his net worth is likely to inflate in the future.

Read More: Is ‘Walk. Ride. Rodeo’ Based on a True Story? Explained