What Will Happen to Rhaenyra and Alicent’s Kids in House of the Dragon? 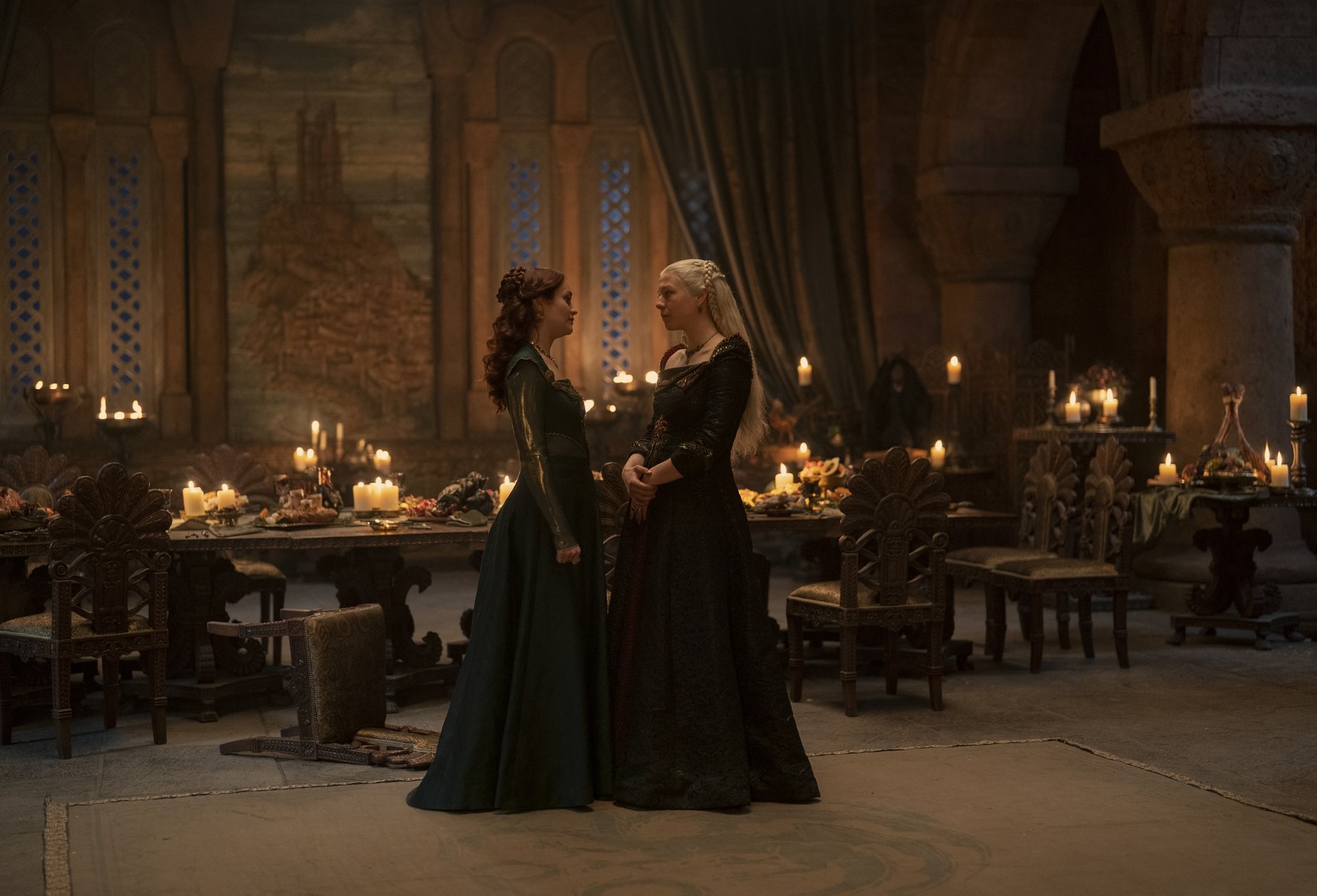 Based on George R.R. Martin’s 2018 descriptive novel ‘Fire & Blood,’ HBO’s ‘House of the Dragon’ tells the story of the brutal war of succession between two factions of the ruling Targaryen dynasty — the Greens and the Blacks. There are two women at the center of the conflict — Rhaenyra Targaryen and Alicent  Hightower — former friends turned bitter enemies. After the death of Rhaenyra’s mother, her father, King Viserys I Targaryen, marries Alicent, inadvertently sowing the seeds of the future conflict. Rhaenyra remains Viserys’ heir until his death, but things become complicated when Alicent gives birth to a boy, and he is named after the man who conquered the Seven Kingdoms. Alicent and Rhaenyra’s children inherit the enmity from their mothers, and even while Viserys is still alive, it reaches a dangerous level. But it is only after his death that things quickly devolve into a war. If you are wondering what happens to all the children that these two women have at the start of the war, here is what we know. BOOK AND SHOW SPOILERS AHEAD.

What Will Happen to Rhaenyra’s Children?

Rhaenyra has three children whose biological father is Harwin Strong, even though they bear Laenor Velaryon’s name — Jacaerys, Lucerys, and Joffrey. With Daemon Targaryen, her uncle and second husband, she has two sons — Aegon and Viserys. However, the first among Rhaenyra’s children to die is not one of them. In the show, when the news of Viserys’ death and Aegon’s (Viserys and Alicent’s son) crowning arrive, Rhaenyra is about to give birth to a daughter, whom the book names Visenya. However, the child was stillborn. Rhaenyra claims that the Greens had a hand in the death of her daughter, though the allegation was never proven.

Lucerys is the first confirmed casualty of war among those with Targaryen blood. He and his dragon Arrax are killed by Aemond Targaryen and his dragon Vhagar. The show writers make a controversial creative decision about what happens during the encounter. The HBO series depicts that both Aemond and Lucerys lose control of their dragons. Arrax attacks the much older and several times bigger Vhagar with dragon fire, prompting Vhagar to kill both Arrax and its rider.

In the books, Jacaerys and his dragon Vermax perish during the Battle in the Gullet, which took place in 130 AC. Otto Hightower entered the Greens into an alliance with the Triarchy, the conglomerate of the Free Cities of Myr, Lys, and Tyrosh, which was an enemy of both Daemon Targaryen and Corlys Velaryon, prominent figures among the Blacks. Jacaerys was killed by a crossbowman.

As for Joffrey, he died in 130 AC after Rhaenyra had taken control of King’s Landing. With the desire to prove himself to his mother, Joffrey tried to ride Syrax, his mother’s dragon, after a prophet named the Shepherd and his flock attacked the Dragonpit. As Syrax tried to avoid the stones and spears thrown by the Shepherd’s flock, Joffrey lost his grip and fell to his death.

Although Viserys was taken captive by the Triarchy forces following the Battle in the Gullet and believed to have died, he eventually made his return. Both Aegon III and Viserys II went on to become kings of the Seven Kingdoms.

What Will Happen to Alicent’s Children?

Alicent had four children with Viserys I — Aegon II, Helaena, Aemond, and Daeron. Although Daeron doesn’t appear in the first season of ‘House of the Dragon,’ Martin hinted in his “Not A Blog” that he would be part of the cast of characters in season 2. Aemond was killed at the Battle above the God’s Eye in 130 AC after Daemon Targaryen stabbed him through his one good eye with the Valyrian Sword Dark Sister. Daemon and Aemond’s respective dragons, Caraxes and Vhagar, were killed as well. Although Deamon’s body wasn’t found, the maesters generally believe that he also died during the battle.

Daeron died during the Battle of Tumbleton in 130 AC, though the manner of his death remains a mystery. Moreover, his body was never identified, and this led to several people claiming themselves to be Daeron.

Helaena didn’t have the striking, angular looks of most members of her family, but she was happy and kind, and the ordinary people loved her. However, following the death of her son Jaehaerys in the hands of the assassins that Daemon sent, Helaena descended into severe depression. She died in 130 AC after jumping from her window in Maegor’s Holdfast and falling on the spikes below. The last surviving child of Alicent, King Aegon II, was poisoned. He was found dead in his litter in 131 AC. After the death of Jaehaera, the daughter of Helaena and Aegon II, in 133 AC, the Targaryen line through Alicent and Viserys became extinct.

Read More: Cargyll Twins in House of the Dragon: Are the Actors Twins in Real Life?