Where is Cruel Summer Filmed?

Created by Bert V. Royal and from executive producer Jessica Biel, ‘Cruel Summer’ is an unconventional drama thriller series that follows the entwined stories of 2 young Texas girls over the course of 3 years, with one of them getting kidnapped and the other subsequently coming into the spotlight as a result. A faithful depiction of small-town teenage life in the 1990s, the show blends nostalgia and mystery to make for an engaging watch. If you’re wondering where ‘Cruel Summer’ is filmed, we’ve got you covered!

‘Cruel Summer’ is based in the fictional small town of Skylin, Texas but is filmed largely on location in Dallas, Texas. Its pilot was filmed in November 2019, and the show was then picked up for a series in January 2020. Principal photography for the remaining episodes was done in late 2020. The retro mystery is shot by Jayson Crothers, who is known for his dramatic camera work and for serving as the director of photography of the action drama series ‘Chicago Fire.’ Let’s take a look at the filming locations that give ‘Cruel Summer’ its retro 90s backdrop.

Multiple locations in and around the city of Dallas, Texas, are used to recreate the fictional small town of Skylin, where the events of the show take place over three years. Commercial and residential neighborhoods of the city that have not been significantly modernized were used to portray the 1990s time period of the show. Long-standing establishments like pubs and cafes that have been around since the 90s or sport a similar aesthetic were also used for on-location filming.

Studio filming for the series took place at South Side Studios in south Dallas. The studios are located at 2901 S Lamar Street, near the trendy neighborhood of The Cedars, less than 2 miles away from downtown Dallas. Shooting for some scenes of the first season also took place at the One Nostalgia Tavern, an eclectic dive bar located at 6521 Abrams Road, in the Lake Highlands neighborhood of Dallas. 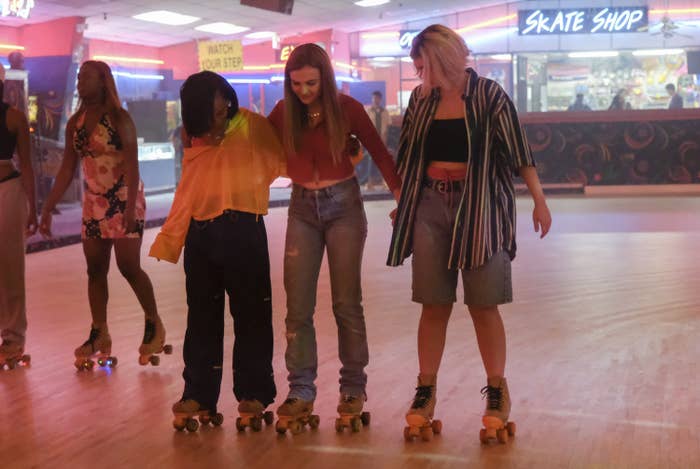 Another quintessential Dallas location that is used as a filming site is the AllGood Cafe in the Deep Ellum district of the city. The cafe is located at 2934 Main Street, and Deep Ellum is one of the foremost entertainment and live music destinations of Dallas. Filming at these locations, which are both popular and longstanding local hangouts, helps to give the series its authentic retro and distinctively Texan look.