Where is Jermaine O’Neal Now?

‘Untold: Malice at the Palace’ is a Netflix original stand-alone documentary that also serves as the first installment of a series that sees well-known athletes display their remarkable character as they talk about their on and off-game ordeals. With interviews from those involved, this episode takes us back to the brutal November 2004 night that ended in “the most infamous brawl in NBA history” when Indiana Pacers, Detroit Pistons, and their fans faced off in Auburn Hills, Michigan. So now, if you’re curious to know more about Jermaine O’Neal, we’ve got you covered.

Who is Jermaine O’Neal?

Born and raised in Columbia, South Carolina, Jermaine O’Neal discovered his love for sports at quite an early age. Owing to the fact that his mother worked hard to support their family and often had to leave her children to their own devices, Jermaine found himself transferring most of his energy into football and basketball instead of falling into the wrong crowd. Thus, once he knew for sure that his height and agility could be his ticket out of the area, he trained diligently in Amateur Athletic Union (AAU) and camps before heading into the NBA at the mere age of 17. 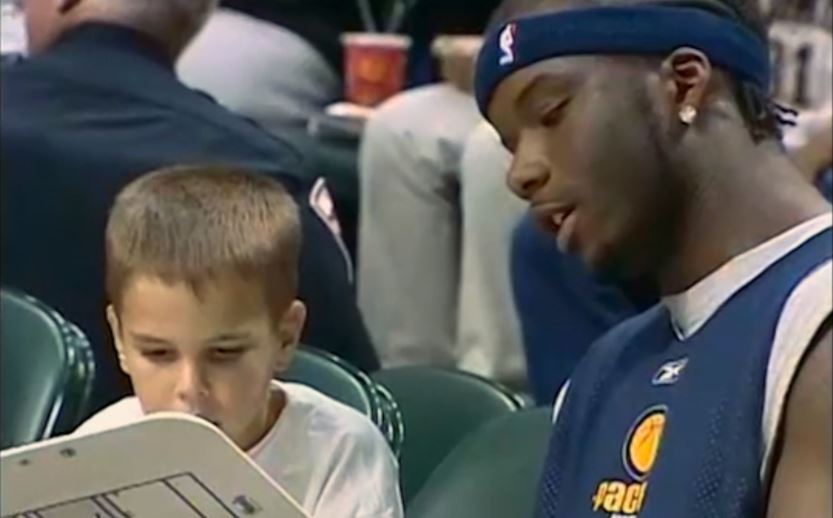 Jermaine began his pro career with the Portland Trail Blazers straight out of high school in 1996 and stayed there until 2000 — when he was traded to the Indiana Pacers for Dale Davis. Since he bore the mark of the youngest NBA player at the time and was slowly proving his worth, he faced a lot of public pressure. Yet, it was okay for him as he was getting the opportunity to play next to legend Reggie Miller. Jermaine was climbing to the top and looking like the next big name in the Pacers, but all plans came apart with the fight in November 2004 and his reduced suspension of 15 games.

Where is Jermaine O’Neal Now?

Jermaine O’Neal yearned to come back with a bang within the league, and although his leadership was crucial for his team in the years that followed, his play suffered because of several injuries. Eventually, in the 2008-2009 season, he transferred to the Toronto Raptors, and then, he found himself with Miami Heat (2009-10), Boston Celtics (2010-12), Phoenix Suns (2012-13), and Golden State Warriors (2013-14). Exhausted after playing for over 18 cycles, Jermaine took a break and chose to sit out the following season to concentrate more on his family. However, he hasn’t returned.

Now, though, Jermaine is an entrepreneur in the sporting industry, where he hopes to “positively impact the next generation of athletes,” according to his Instagram. The six-time NBA All-Star owns Drive Nation, a sporting facility that offers training, clinics, camps, tournaments, events, and much more for several athletic areas, including soccer, basketball, flag football, and volleyball. Jermaine is also a proud husband and father of two. His social media platforms prove how much he cares about his wife Mesha, son Jermaine Jr., and daughter Asjia.

We should also mention that he no longer has any issues with Ron Artest. Jermaine hasn’t spoken about the melee or anyone connected to it to the media for years, but that recently changed thanks to the Netflix series. In his interview for ‘The Right Time with Bomani Jones’ Podcast, he candidly said, “I think it’s important to talk about that I have nothing but respect for [Ron’s] struggle, and how he handles his struggle. Because I know now, and I’m better educated on what he deals with on a day-to-day basis.”

Jermaine added, “I did not have very good feelings [towards him] when we played together. To me, at the time, it was just about winning and being dependable. I thought he was choosing not to be dependable — not knowing that his struggle is anxiety and everything else that came with playing in front of 20,000 people on any given night…I think I could’ve been a better brother, teammate to Ron — because back then, I [was] just responding…It was a lot to take in.”