Where Was American Beauty (1999) Filmed?

Directed by Sam Mendes, ‘American Beauty‘ is a 1999 black comedy movie that centers upon Lester Burnham, an advertising executive who seems to have an ideal life, a stable job, and a happy family. However, on the inside, he is a sexually frustrated suburban father who suffers from a mid-life crisis upon becoming infatuated with his daughter’s best friend, Angela. Meanwhile, Lester’s insecure teen daughter, Jane, starts getting closer and closer to a shy boy next door, Ricky Fitts, who lives with an abusive father.

This cult classic touches upon several sensitive and prevalent subjects throughout the narrative, such as depression, paternal and romantic love, adultery, materialism, sexuality, and self-liberation, all of which keep the viewers hooked on the movie. The drama movie features brilliant performances from a talented cast comprising Kevin Spacey, Mena Suvari, Annette Bening, Chris Cooper, and Thora Birch. Furthermore, the close-knitted neighborhood and high school scenes will likely make you wonder about the actual filming sites of ‘American Beauty.’ In that case, you might be interested in what we have to share about the same!

‘American Beauty’ was entirely filmed in California, particularly in Los Angeles County and Sacramento. The principal photography for the dramedy reportedly commenced on December 14, 1998, and wrapped up after 50 days of shooting in late February 1999. Although the story is set in one of Chicago’s suburbs, the makers decided to lens the movie in California. Thanks to the Golden State’s vast and versatile landscape, it stood in perfectly for Chicago. Now, let’s not waste any time and jump right into the specific locations that appear in the movie!

Most pivotal portions of ‘American Beauty’ were lensed in Los Angeles County, the most populous county in California and the United States. Although the Burnhams and Fitts are neighbors in the movie, the exterior shots of their respective houses were taped miles away from one another. While the property at 11388 Homedale Street in Brentwood stood in for the Burnham house, the residence at 330 South Windsor Boulevard in Hancock Park doubled for the Fitts house. 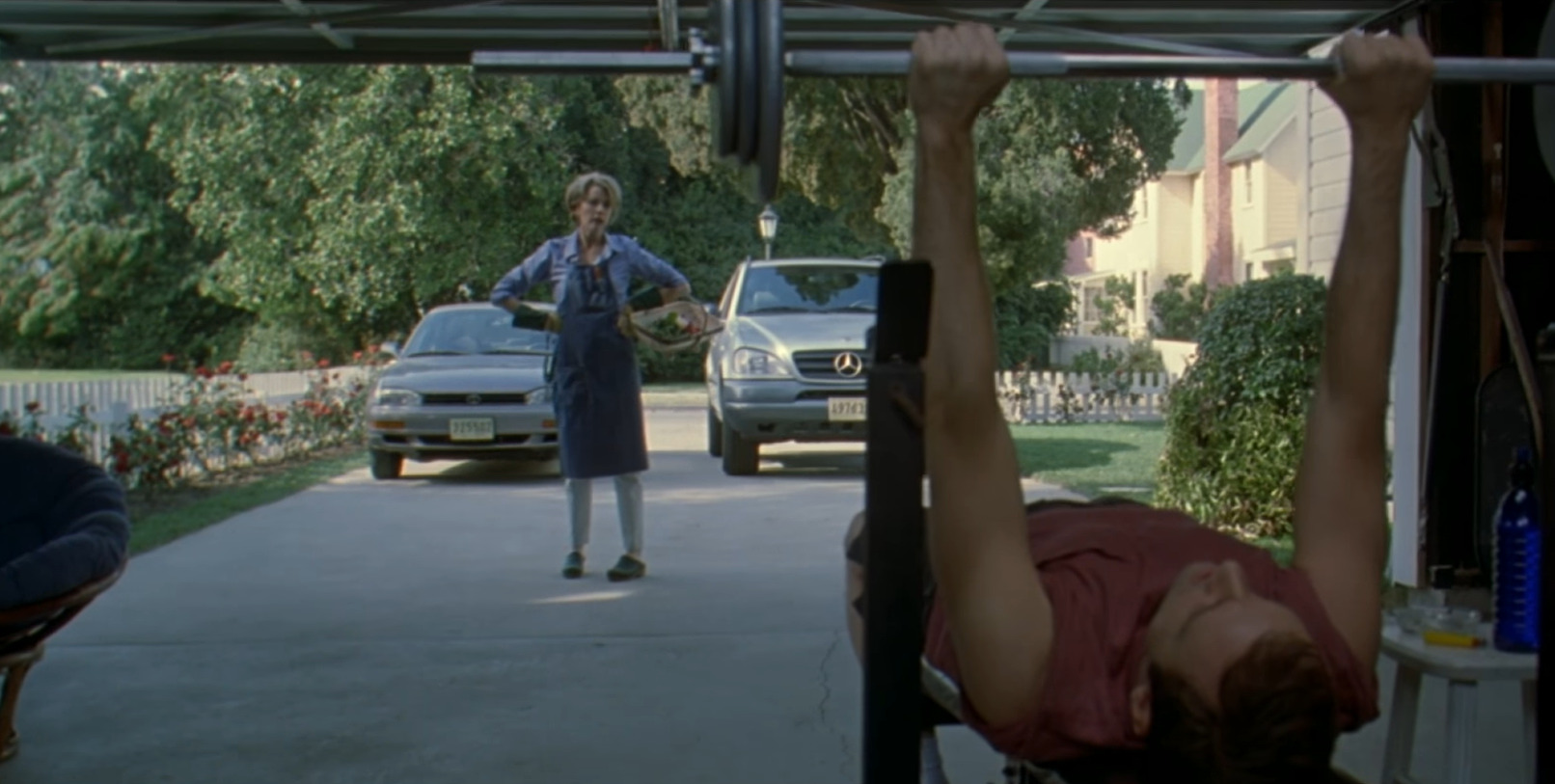 Interestingly enough, the interior scenes involving both the houses were recorded in two adjacent homes on the Blondie Street of the Warner Bros. Ranch Facilities at 411 North Hollywood Way in Burbank. The production team strategically rebuilt the houses on the lot to incorporate the scenes involving Ricky and Jane’s silent conversations from their windows and to establish the right lines of sight between Ricky’s bedroom and Lester’s garage. As for the rest of the house interior sequences, they were shot on the backlot, on location, and soundstages, especially the overhead shots.

The high school scenes were lensed on location in two schools — South High School at 4801 Pacific Coast Highway in Torrance and Long Beach Polytechnic High School at 1600 Atlantic Avenue in Long Beach. In addition, Carl’s Jr. at 20105 Saticoy Road in Canoga Park doubled for Mr. Smiley’s, where Lester gets a job serving burgers. For taping the target shooting scenes, the cast and crew set up camp in Los Angeles Police Academy at 1880 North Academy Drive in Elysian Park. The scenes depicting Carolyn and her paramour were shot in the Top Hat Motel 9 (now Travel Inn) at 8525 Sepulveda Boulevard in North Hills.

A few additional driving scenes involving Lester were recorded in South Bay, Chatsworth, and Alameda Avenue. Moreover, the filming unit of ‘American Beauty’ utilized the facilities of Warner Bros. Studios at 4000 Warner Boulevard in Burbank. The expansive studio facility comprises 37 soundstages, ranging in size from 6,000 to 32,000 square feet, located on the main lot and Ranch facilities combined. It also provides filmmakers with a wide range of exterior sets, making it an ideal taping site for all productions.

Some aerial shots at the beginning and end of the movie, depicting the Chicago landscape and suburbs where the story is set, were lensed in Sacramento, California’s capital city. Located at the confluence of the Sacramento River and the American River, the City of Trees is known for its evolving contemporary culture, which is why it is considered one of the hipster cities in California.