Where Was Bridesmaids Filmed?

Directed by Paul Feig, ‘Bridesmaids’ is a raunchy comedy film that chronicles the life of a woman named Annie (Kristen Wiig) who seeks external validation to make up for the fact that she doesn’t love herself enough. When she is asked to be the maid of honor at her best friend Lillian’s wedding, Annie realizes that she must overcome the flaw.

The 2011 film features an all-female cast and is known for being an iconic and feel-good movie. It also features a bunch of aesthetic settings, including Ted’s house, Annie’s apartment, and the Brazilian Steakhouse, to name a few. You might be curious about the locations of these iconic sites in the movie. In that case, we’ve got you covered. Let’s dive into the filming locations!

The majority of the scenes were recorded in and near sites in Los Angeles and other parts of California. In addition, a few days were spent filming minor sequences and establishing shots in the states of Illinois and Wisconsin. Here are the details about the specific filming sites!

Given that Los Angeles is the heart of the nation’s film and television industry, it makes sense that numerous scenes were filmed here. Although the film’s primary settings are Milwaukee and Chicago, the City of Angels in Southern California served as the location for principal photography. Some of the LA-shot scenes include the one where Annie runs into the Irish cop Nathan Rhodes at Jay’s Liquor Market at 14627 Crenshaw Boulevard in the city of Gardena in the South Bay region.

The all-white bridal shop Belle En Blanc in the film, is situated on Spring Street in Downtown Los Angeles. The scene where after a disastrously planned trip to Las Vegas, Lillian decides Helen should arrange the wedding, and Annie departs to drown her sorrows with Officer Rhodes was also filmed in LA. The Redwood Bar & Grill, located at 316 West Second Street, west of South Broadway in downtown Los Angeles, is where the interior scenes of the bars were filmed.

The neighborhood of Pacoima in the San Fernando Valley region also served as one of the filming sites. To be precise, the scenes featuring the interior of the aircraft were taped at Air Hollywood’s K9 Flight School at 13240 Weidner Street in Pacoima. A property at 300 San Juan Avenue in Venice doubled up as the exterior of Lillian’s apartment. The production team also chose to film a few scenes at the Spring Street Towers, located on Spring Street in Downtown Los Angeles. The scenes set in the luxurious home of Ted were shot at 3722 Sapphire Drive in the neighborhood of Encino in San Fernando Valley.

Paramount Pictures Studios, located at 5555 Melrose Avenue, also doubled up as the shooting site for several scenes. The iconic nuptials shot was also filmed at the 127-acre botanical garden known as the Los Angeles State and County Arboretum at 301 North Baldwin Avenue, near Arcadia, which is among the most frequently rented filming spots in the world. The cast and crew also filmed some scenes at 380 South San Rafael Avenue in Pasadena, located northeast of downtown LA in Los Angeles County.

The setting for the scene wherein Officer Rhodes takes Annie to test his speed gun was intended to mimic the midwestern landscape of Chicago and Milwaukee. However, the sequence was filmed at Jeep Trial on the Californian South Coast, north of Oxnard in Ventura County. The scene featuring Rhodes’ speed trap was shot in West Gonzales Road in the area.  The sequence featuring Lillian’s engagement party was filmed at the Sherwood Country Club at 320 West Stafford Road in Thousand Oaks in Ventura County.

Located about 30 miles from LA, a few scenes were also filmed in the city of Orange in the eponymous County. The exteriors of Annie’s mother Judy’s home were shot in Santa Clarita, which is 40 minutes outside downtown Los Angeles. The Brazilian Steakhouse in the movie is located at 14032 Oxnard Street in Van Nuys, California. 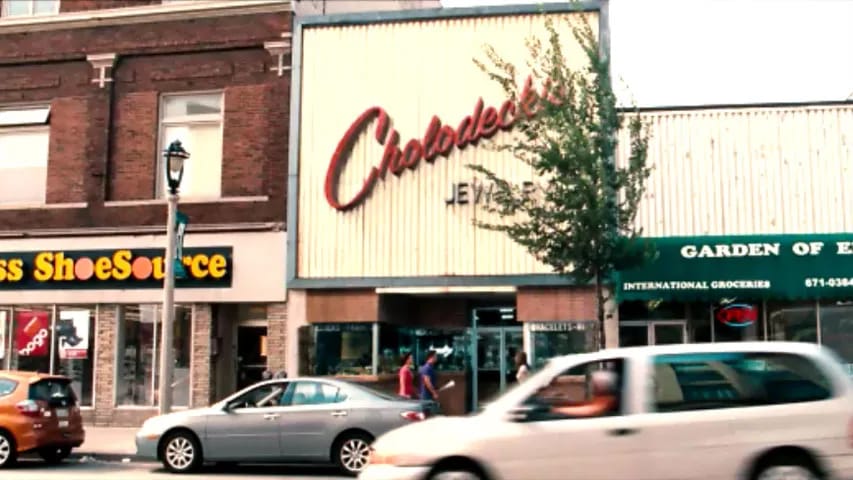 Despite being a small city, Milwaukee has some impressive landmarks that double up as filming sites. Thus, it’s no surprise that some of the scenes of the movie were filmed there. Some of the scenes were shot at Cholodecki’s Jewelry Store which is located at 1009 Mitchell St. in Milwaukee, Wisconsin. Scenes set in Annie’s apartment were filmed at 2501 South Kinnickinnic Avenue.The bar Annie and Rhodes visit in the film is situated at 3218 West Cameron Avenue in Milwaukee, Wisconsin.

Located in Illinois on Lake Michigan, Chicago is renowned for its magnificent skyline and creative architectural design. The premise of the film is wonderfully complemented by the colorful and vibrant city. The Chicago River and the Navy Pier are two Chicago landmarks that can be seen in the film.