Where Was Hallmark’s Redemption in Cherry Springs Filmed? Who is in the Cast?

Directed by Letia Clouston (‘Accidentally Engaged’), ‘Redemption in Cherry Springs’ is a Hallmark Movies & Mysteries film that tells the story of Boston-based high-flying investigative reporter Melanie Abrams, who returns to her small and picturesque hometown Cherry Springs in New Hampshire, to find a little peace and comfort away from the controversy surrounding her latest report.

However, when one of her childhood friends mysteriously disappears, Melanie must use her rigorously-honed fact-finding skills to uncover what really happened. If you are wondering whether ‘Redemption in Cherry Springs’ was filmed on location or elsewhere, here is what you need to know.

Cherry Springs, New Hampshire, is a fictional town; it doesn’t exist in real life. Clouston, Cinematographer Terrence Laron Burke, and the rest of the cast and crew filmed ‘Redemption in Cherry Springs’ in various locations in Hudson Valley, New York, including the city of Newburgh and the village of Maybrook. Principal photography reportedly took place between June and July 2021. Let’s look at specific locations in detail.

Newburgh is a city located in Orange County, New York. It served as a primary location for filming for ‘Redemption in Cherry Springs.’ A part of the larger New York megacity, Newburgh is a prominent filming location. Projects like ‘The Sopranos,’ ‘Super Troopers,’ and ‘Mr. Deeds’ were also filmed in the city.

The scenes involving Uncle Joe’s diner were filmed at The Main Line Diner & Pizza Company, located at 940 Homestead Avenue in Maybrook, a village in Orange County. On June 14, the production crew was spotted at the diner. Interestingly, Dennis Leahy, the Mayor of Maybrook, appears in at least two scenes of ‘Redemption in Cherry Springs.’ 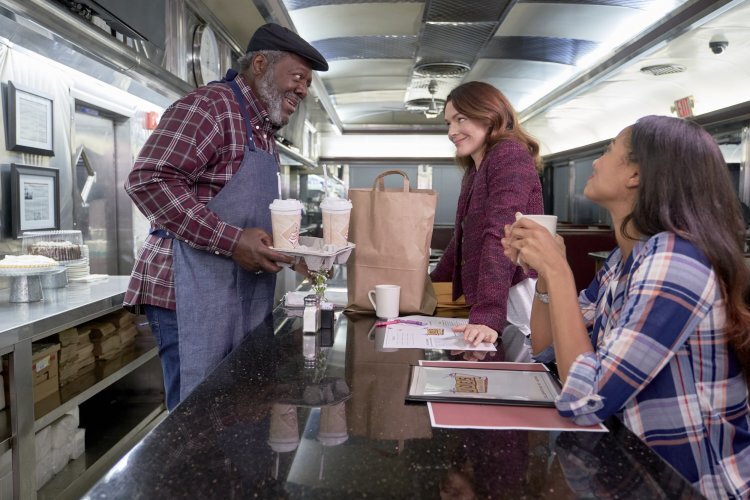 New York-native Rochelle Aytes portrays Melanie Abrams, a brilliant investigative reporter who returns to Cherry Springs to avoid work-related controversy in Boston. However, she soon discovers that no matter where she is, mysteries will always find her. Aytes made her on-screen debut in a 2003 episode of ‘Sex and the City.’ She has also appeared as Leigh Barnthouse/Lashondra in ‘Drive,’ Grace Russell in ‘The Forgotten,’ and Michelle Moore in ‘The Purge.’ Aytes made her film debut with the 2004 comedy ‘White Chicks.’

Keith D. Robinson portrays Detective Jake Collins, who has recently taken his position in the police department. After Melanie begins investigating her friend’s disappearance, he reluctantly agrees to collaborate with her. Robinson is an actor and R&B singer who is known for playing Nathan Walker in ‘American Dreams,’ Devin Carter in ‘One Love,’ and Miles Calloway in ‘Saints & Sinners.’