Where Was Lifetime’s Mistletoe in Montana Filmed? Is It a True Story? 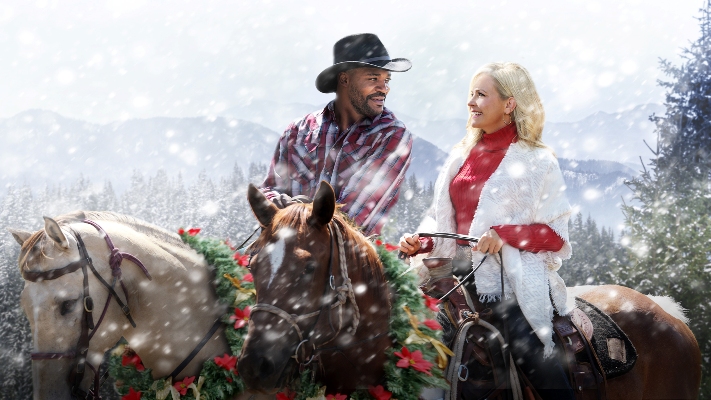 Director Kellie Martin brings the holiday-themed movie titled ‘Mistletoe in Montana’ to life. The film narrates a run-of-the-mill romance in the most special time of the year, Christmas, except that it involves horses. The storyline follows cowgirl Merry, who opens up her dude ranch – The Paradise Ranch – for guests during the Holiday. Enter Mark Aguilar, and Merry’s life as a single goes for a toss. With two kids and status as a single dad, how Mark falls for Merry in a ranch is something worth watching.

Mark and Merry bonding over nature along with an enigmatic display of horses running in and around a ranch during the winter season were apparently filmed in locations with surreal beauty. In case you are still guessing what locations were used to shoot this movie, we will not keep you waiting any further. Here’s a look at everything we know!

‘Mistletoe in Montana’ was filmed across different parts of the state of Montana, specifically Seeley-Swan and East Helena. So, it is safe to say that the film’s production stays true to the narrative, which is set in Montana. Melissa Joan Hart (Merry) even had to take lessons for horseriding, square dancing, and archery. The film was apparently shot in the second half of 2021. In case you are wondering what are the locations that have been used in the movie, we have got your back.

A major part of the shooting of ‘Mistletoe in Montana’ took place in Seeley-Swan, also called Seeley-Swan Valley. The region is located on the east side of Flathead Lake. A few scenes were filmed in the town of Seeley Lake (Missoula County). The town is located next to the eponymous lake and offers a spectacular view of nature at its best, making it an appropriate backdrop for films and TV shows. A private ranch located in the Swan Valley area was selected for capturing several scenes.

According to reports, the production crew utilized local resources as much as possible. In fact, the two horses seen in the posters of the film were were brought in from the Swan Mountain Outfitters. Although the majestic beings were not used to being handled by anyone else other than their owners, they did a great job, and the shoot went on without a hitch. Apparently, some significant sequences were also shot in the nearby community of Condon.

A few scenes in the movie have been lensed in the city of East Helena in Lewis and Clark County. A city councilman, along with some other local residents, filled in as extras for the shoot here. The carriage ride and holiday shopping sequences were filmed in East Helena. A few scenes were possibly filmed near Canyon Ferry Lake, which is about 45 minutes from East Helena by road.

Nearby Condon, which is a community situated in Missoula County, also serves as one of the filming locations for this movie. Here the film crew stayed for almost a week in mid-July 2021. One of the production representatives even wrote about the helpfulness of the community members during the time of the shoot, which included residents opening up their homes to the crew members.

In all likelihood, the city of Polson in Lake County also features in the film.  The city underwent an extensive process of beautification before the filming crew arrived. A few scenes may have been shot in and around Main Street as well as different parts of downtown Polson.

This Lifetime romance drama is led by Melissa Joan Hart, who essays the role of Merry, a strong-headed cowgirl. The actress is a familiar face who has been credited for her role in the 1996 series ‘Sabrina the Teenage Witch.’ In addition, she appears in ‘Clarissa Explains It All’ and holiday movies like ‘A Very Nutty Christmas,’ ‘Holiday in Handcuffs,’ and ‘The Santa Con.’

Is Mistletoe in Montana Based on a True Story?

‘Mistletoe in Montana’ is partially based on a true story. Apparently, the idea for the film came to Melissa Joan Hart when she attended a cousin’s wedding in Wyoming in 2020 along with her mother Paula Hart, who happens to be one of the executive producers. In an interview in December 2021, Melissa admitted that she found out that her cousin had gone to a ranch and soon after fell for a wrangler there. So, she used the real-life experience of her cousin to create the storyline of this movie.

However, the film slightly differs from what actually happened as Melissa reversed the story by making Merry the wrangler on the ranch. Moreover, the film focuses on a biracial couple, making the tale all the more relatable and universal. Therefore, the actress developed the storyline with the help of writer Don Perez and turned a real life-event into a memorable Christmas romance drama.