Where Was Seinfeld Filmed?

‘Seinfeld’ is synonymous with sitcoms and has long held the enviable reputation of being one of the best-written and most popular ones ever created. Decades on from its conclusion in 1998, the show, with its simple premise of 4 friends that live in the city, continues to capture the audiences’ imaginations and funny bones. The character of middling comedian Jerry is joined by his neighbor Kramer, stingy best friend George, and ex-girlfriend turned pal Elaine to set up a string of gags and situations in multiple spots around the city they frequent. Are you wondering where Seinfeld was filmed? Let’s find out.

‘Seinfeld’ is based in New York City, where Jerry is a minor celebrity stand-up comedian. In actuality, the show was filmed on the opposite coast in California. Being a network sitcom, all of the show’s filming was undertaken in the studio. Multiple studio facilities around California were used to film both indoor and outdoor scenes of the show that recreate New York City. Let’s take a look at the show’s specific filming locations.

Despite the show being firmly set in New York and the character of Jerry even specifying his address multiple times on the show as 129 West 81st Street in Manhattan, filming for ‘Seinfeld’ took place almost exclusively in Los Angeles, California. The show’s pilot episode was filmed at what is now Red Studios, located at 846 North Cahuenga Boulevard in Hollywood. The studios were formerly called the Desilu Cahuenga Studios and Ren-Mar Studios. Specifically, Stage 8 of the production facility was used for much of the pilot’s filming.

Soundstage 19 of the CBS Studio Center at 4024 Radford Avenue, Studio City in the San Fernando Valley, was used to film a majority of the first 3 seasons. Sets of Jerry’s apartment and Monk Cafe, two spots where the characters regularly hang out, were built on this stage. The increasing popularity of the show, in turn, raised the scale of production, and filming was later moved to Stage 9, which was the largest stage in the lot.

Interestingly, the set for Jerry’s apartment was built too small, possibly because the production team did not realize that they would be using the sets for 9 seasons. Much later, fans of the show also pointed out how the shape of Jerry’s apartment did not fit with the corridor outside as the kitchen would have jutted into the corridor. However, this was just a small quirk that people were happy to go along with.

The outdoor scenes where we see the characters out and about on the streets of New York are filmed between Stages 14 and 15 at the CBS Studio Center, which is also known as the “New York Street” set. The shops are suitably changed to make it look like different parts of the city, but the stretch of the street used to film all the scenes remains the same. Interior scenes of different shops that the characters visit are also filmed on this street. A similar “New York Street” located in Paramount Studios at 5555 Melrose Avenue is also used to depict the Big Apple. A CBS backlot doubles up for the iconic Central Park. 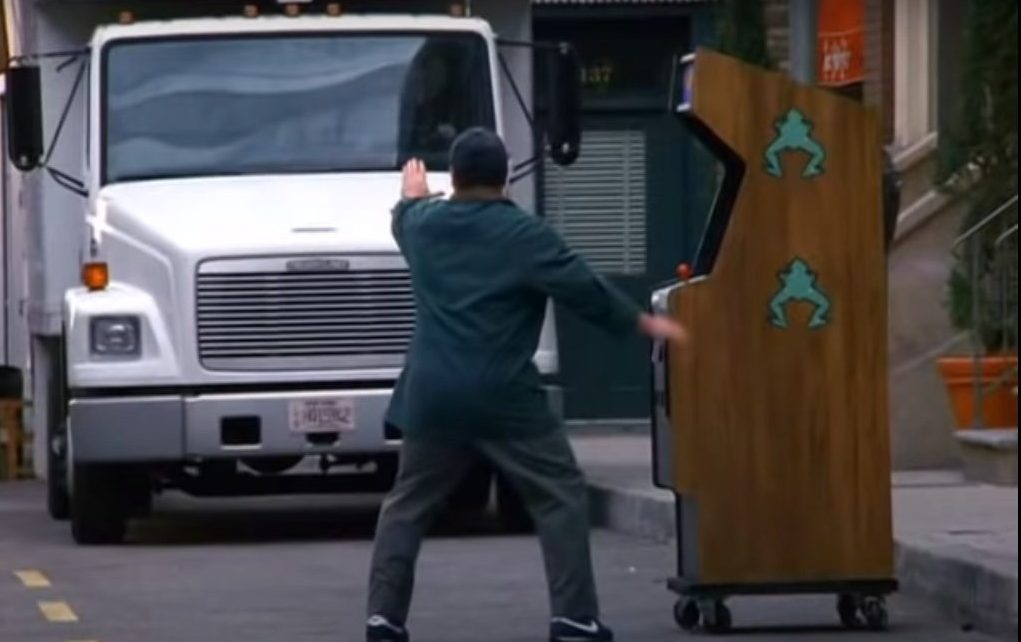 The exterior of Jerry’s New York City apartment was filmed at 757 New Hampshire in Los Angeles. Filming was also undertaken at Brownstone Street in a backlot in Universal Studios, located at 100 Universal City Plaza in Universal City, Los Angeles County. The Warner Brothers Studio at 3400 Warner Boulevard, Burbank, was also used for filming the show.

Despite being filmed almost exclusively in Los Angeles, the show has a distinctly New York tinge. Many of the locations seen on the show are modeled after spots in the Big Apple, including Monk’s Cafe. The gang’s regular haunt is actually modeled after Tom’s Restaurant, which is located at 2880 Broadway. The Original Soupman, a soup kitchen at 37 West 48th Street, similarly inspired the Soup Nazi’s soup kitchen on the show. Other scenes with New York City landmarks like Rockaway Beach (8601 Shore Front Parkway, Rockaway Park) and the New York Public Library (5th Avenue at 42nd Street) are also seen on the show.

Read More: Is Seinfeld Leaving Hulu? When Will Seinfeld Release on Netflix?