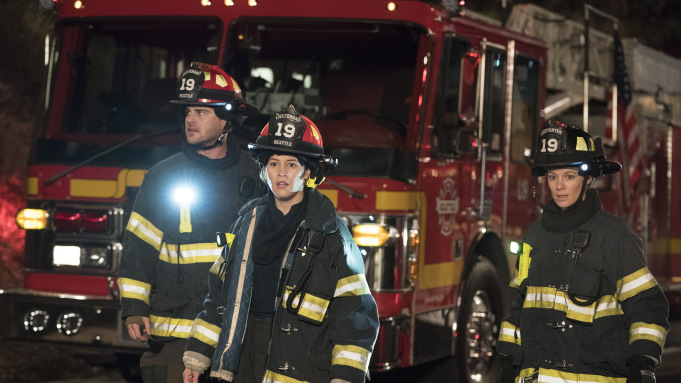 For more than a decade-and-a-half, ‘Grey’s Anatomy’ has entertained the audience with the complicated personal and professional lives of the doctors working in Seattle. We have seen them treat one patient after another under all sorts of stressful situations. But they are not the only ones who have to face the pressure of saving lives. In its spin-off series, ‘Station 19’, we meet the group of people who are the first responders to life-threatening situations.

“Wouldn’t it be fun to think they could have existed un this universe this whole time and we’d just never shone a light on this particular place?” said showrunner Stacy McKee. “As we’ve watched ‘Grey’s’ over the years, we’re always out in the breezeway. Paramedics get out of the rig, drop off patients and get back in the rig and drive away. We never followed them so I wanted to get back in that rig and go with them.”

While ‘Station 19’ has branched out from ‘Grey’s Anatomy’, there are a lot of differences between the shows, one of which is the filming locations. The doctors generally have their hands full at the hospital, but the job of the firefighters takes them all over the city. Let’s find what locations serve the best backdrop for such exciting scenes. Here are the ‘Station 19’ filming locations.

Where Is Station 19 Filmed?

‘Station 19’ follows the story of the men and women who work at the Seattle Fire Station 19. It not only exists in the same universe as ‘Grey’s Anatomy’, but is also located just three blocks from the Grey Sloan Memorial Hospital. Like its fictional location, the filming location of ‘Station 19’ is also similar to ‘Grey’s Anatomy’. Despite its setting in Seattle, most of the filming takes place in LA. However, capturing the essence of the city is also important, which is why parts of the show have been filmed at various locations in Seattle.

The Station 19 featured in the show has been modelled around the Station 20 that exists in Seattle. A replica of it has been built in a studio in LA. This allows the crew to easily capture the scenes that keep oscillating from one location to another. Having everything on the same place means that the boathouse and the captain’s office are almost next to each other, while the common area falls adjacent to the locker room.

On the trickiness of swapping LA for Seattle, director Paris Barclay said, “Seattle is a lot hillier with no palm trees. The street signs are different. Silver Lake is more like Seattle in its hilliness and some of the downtown LA area works.”

A couple of scenes require exterior shots which are filmed in various locations in LA. For example, the exteriors of JJ’s house were filmed at Langham Apartments. An episode required filming at a strip mall at 2126 South La Brea Ave. The crew used lighting and other effects to make it look like the place was on fire. The trick was so effective that actual 911 calls were placed reporting the fire.

“Shooting LA for Seattle works occasionally, but there is nothing like a real exterior Seattle scene to bring the city to life,” admits Krista Vernoff, who is now the showrunner for both ‘Grey’s Anatomy’ and ‘Station 19’.

While a studio set has been built in LA, the exteriors of the station require the crew to film the scenes in Seattle. These shots have been filmed at the real Station 20 at 15th Ave West, Seattle. Paris Barclay, who directed the first episode of the series, said, “We did spend a day-and-a-half with the second unit doing day and night (shots of fire) trucks moving through Seattle, and in and out of the fire station.”

The cast was also seen filming at Chihuly Garden and Glass at Seattle Centre, as well as the Occidental Square near Pioneer Square in downtown Seattle.