Who Caused the Riot at Woodstock ’99? Did Anyone Die?

The Woodstock Music Festival’s entire brand was peace, love, and music within a community of youngsters to evoke a sense of belonging, but this message completely slipped away in 1999. The original 1969 event was honestly magic, as per Netflix’s ‘Trainwreck: Woodstock ’99,’ yet its rebirth at the very end of the millennium was pure brutality, disrespect, rage, and ultimately a riot. So now, if you wish to learn precisely what or who sparked the intense damage as well as the entire rock fair’s unfortunate aftermath, including reports of deaths, we’ve got the details for you.

Who Caused the Riot at Woodstock 1999?

Held between June 22-25, 1999, at the former Griffiss Air Force Base in Rome, New York, Woodstock ’99 was as far from the initial music festival as imaginable for a myriad of different reasons. Not only was it at an infrastructural, asphalt-filled place with little to no shade during the hottest days of the year rather than a field, but it was also quite money-driven, according to the docuseries. Costs were supposedly cut in every possible area while there were ridiculous high-price concessions on both food and drinks, meaning the attendees were the ones to suffer incessantly. 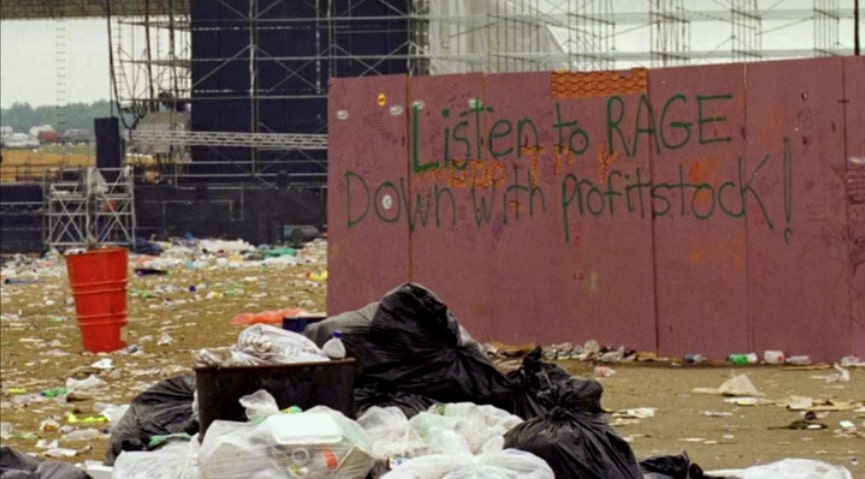 Whether it be a water bottle priced at $4, the portable toilets overflowing, insufficient security/medical personnel, and no clean-up crew, everything denoted a lack of care for the concert-goers. As if that’s not enough, the Netflix original even reveals that the free water provided to them was actually completely contaminated with feces, all of which raised a sense of sheer resentment. The fact a majority of the concert’s line-up were bands with heavy music and the headlines at the time were mainly about the Clinton scandal, frat boys, or fights also played a role in how things played out.

Per the production, the irritation of the attendees had shifted into anger by the end of night three, and the beautiful vigil for the Columbine High School Massacre’s victims gradually spiraled. They’d been given candles, so upon the event’s closing on July 25, 1999, some used the same to make their feelings known and the rest joined in with mob mentality, according to ‘Trainwreck.’ The youngsters razed the grounds, burned down the 12 truck trailers there, looted the vendors, smashed open or stole the ATMs, and just caused mayhem until state troopers showed up to shut things down.

While seven individuals were arrested on charges including rioting, petty theft, and disorderly conduct, it’s unclear whether the legal case against any of them went further or not. However, we do know that from the four to eight sexual assault cases that came to light following Woodstock, one man, Gary Price, quickly pled guilty to a sex crime, yet the details of it are undisclosed. Another man, former prison guard Timothy Weeden, also pleaded guilty (in 2000) to sodomy for forcing a 15-year-old girl to perform oral sex on him off-site, for which he received six years.

From what we can tell, at least six or seven concert-goers were injured during the riots of Woodstock ’99, yet roughly 120+ attendees were hospitalized over the weekend for various causes. The three deaths that occurred around the festival, though, were entirely different as well as surprising — they had nothing to do with the seemingly endless roughness on the grounds.

A 44-year-old Hyannis, Massachusetts resident (whose name has not been revealed) passed away on July 24 after suffering a heart attack at his campsite — he had a pre-existing heart condition. Then there was 24-year-old David Derosia of Waterbury, Connecticut, who sadly lost his life to complications from a heat stroke at the local hospital on July 26 — he’d been admitted the day prior.

The last death is of 28-year-old Troy, New York, resident Tara Weaver, who shockingly passed while making her way home on July 26, 1999. She was walking along the side of the road after experiencing car trouble when she was hit by not one but two vehicles in quick succession in freak accidents. She was pronounced dead on the scene.