Who is Benoît in Emily in Paris? Is He Gay or Straight?

‘Emily in Paris’ explores the glamorous and occasionally disastrous experiences of Emily Cooper, an American marketing executive, in Paris. The Netflix show, created by Darren Star, thus presents to us a heady mix of romantic misadventures and workplace drama against the backdrop of a beautiful city.

As Emily gets used to the City of Love and massively ups her already fantastic socializing game, she meets a range of new people through her friends and coworkers. One such person is Benoît; we first meet him, thanks to Mindy, in season 2 of the series. Charming and tousle-haired, the French Benoît seems like the perfect rugged street musician. However, Benoît’s sexuality soon comes into question, as two characters, in particular, begin to show interest in him. So, is Benoît gay or straight? We’ve got the answer you’re looking for. SPOILERS AHEAD.

Who is Benoît in Emily in Paris?

In episode 4 of season 2, we meet Benoît and Étienne outside the washroom of the club where Mindy is employed as the “dame pipi.” Although Mindy is allowed to sing occasionally, her main job is to collect money from those looking to relieve themselves. Benoît and Étienne approach Mindy after she finishes a song onstage and goes back to her post. After Étienne calls her “the most overqualified dame pipi in all of Paris,” Benoît tells Mindy, “Okay, you were incredible. And we might have a job for you.”

Mindy immediately assumes that handsome Benoît and stylish Étienne are both gay — probably because the latter has his arm around the former — and says that she’ll sing at their wedding. Also, the fact that they’re at a drag club might have forced her to assume that they’re a couple. A second later, she tells the duo that she’ll even officiate their wedding.

After asking which job will pay more, Mindy hurriedly says that she’ll take up both before even getting an answer. Benoît and Étienne laugh and ask her to join their band as a singer; the latter says that they play at some “pretty cool spots.” Although Mindy worries about her expired work visa, the two musicians assure her that her official documents won’t be an issue for them.

Then, when Mindy finally goes to her first gig with the duo, she realizes that what they actually do is busking. Benoît is the guitarist whilst Étienne plays the keyboard. Despite her initial hesitation, Mindy ends up having fun and embraces her old passion for singing. She easily gets along with her two talented bandmates, who already seem to be quite close.

Is Benoît Gay or Straight?

Then, when Julien says that he’s interested in Benoît, Mindy says that she thinks he’s single. Emily then suggests that her friend set Julien and Benoît up during the Chopard soirée. Thus, Mindy bags a gig for the band just because of Emily’s friendship and Julien’s desire to date (and, of course, due to the band’s musical talent as well!).

After the band’s fantastic performance on the bateau-mouche, Mindy introduces Benoît to Julien. “He [Julien] thinks you’re [Benoît] totally hot,” says Mindy. Benoît then says, “Okay, and I think that you’re [Mindy] totally hot.” A shocked Mindy exclaims, “Wait, you’re straight?” Thus, it becomes apparent that Benoît is not gay and is actually interested in Mindy.

Soon, Benoît and Mindy grow close. He even tells her, at the park in episode 7, that he used to go to music school but dropped out after his favorite teacher told him to stop composing songs. In fact, he only recently started writing music again. “Yeah, since you joined the band, I’ve been feeling very inspired,” he confesses to a touched Mindy, emphasizing that she’s the sole reason for his renewed interest in his long-forgotten musical passion. The two then kiss. Much later, they have sex in Emily’s apartment.

However, soon there is trouble in paradise. Étienne finds out about Mindy’s billionaire father after his friend in China publishes information about (the famous) Mindy’s drag club job and busking band on the internet; he asks her to tell Benoît the truth. When she doesn’t, Étienne himself tells his bandmate about Mindy’s social status. “Mindy’s not some average dame pipi we saved from obscurity, Benoît. She comes from one of the richest families in China,” he reveals to his shocked friend. 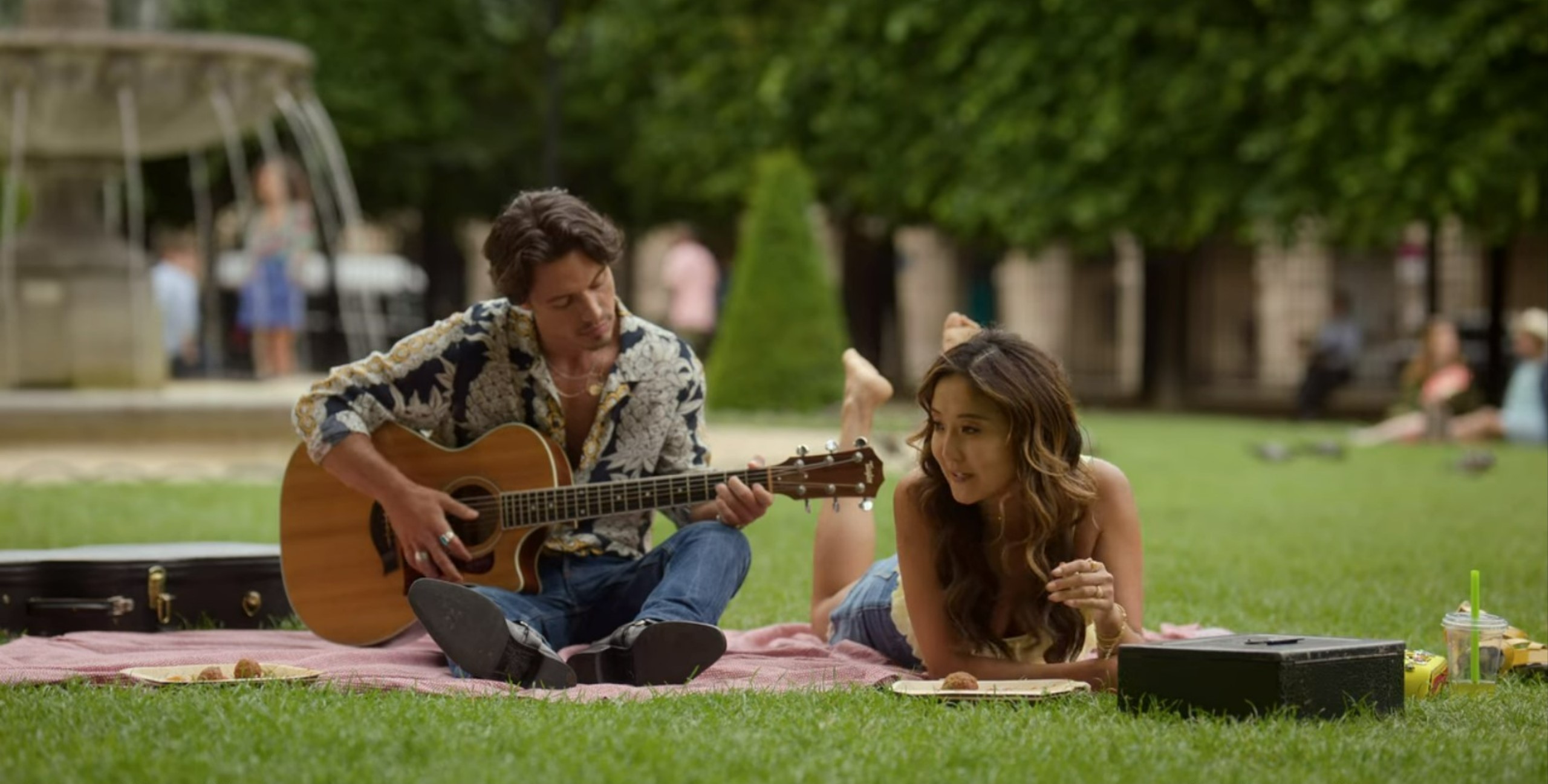 Mindy says that she didn’t tell Benoît the truth because he built a “starcrossed, starving artist journey” for them based on their relationship and music. However, he understandably gets offended. “Wow. You’re slumming it with us,” he says, believing that Mindy simply wanted to experience being “poor in Paris” in the exotic way a lot of rich people want to for artistic purposes.

In episode 10, Mindy apologizes to Benoît, who’s still distant towards her. The band then performs at a Chinese supper club in Belleville — the club owner’s daughter is a big fan of the Chinese Popstar and thus wants Mindy to play and pose for a photo. During the performance, Benoît seemingly forgives Mindy and begins to play “their song.”

An emotional Mindy gives a fantastic vocal performance and, at the end of the set, kisses Benoît. The two are clearly back together as the crowd cheers. So, it’s guaranteed that Benoît is not gay, quite straight, and very much into Mindy. The two will likely share their backstories and become closer than ever. Bonded by both music and mutual attraction, we’re sure Benoît and Mindy will have a happy time ahead!