Who is Carmen in The Goldbergs? Who Plays Her?

As often happens with most long-running TV shows, ABC’s period sitcom ‘The Goldbergs’ has undergone multiple changes in its 10th season. While the most prominent of them is, of course, the departure of Jeff Garlin, whose character — Murray Goldberg or the patriarch of the Goldberg family — dies in the intermediate period between seasons 9 and 10, there are also other changes that are bound to play critical roles as the plot goes forward. This includes the introduction of Carmen, a new love interest for Adam Goldberg (Sean Giambrone). Here is everything you need to know about her. SPOILERS AHEAD.

Carmen makes her first appearance in ‘The Goldbergs’ season 10 episode 9, titled ‘Million Dollar Reward,’ as one of Adam’s co-workers at the diner with the 1950s theme. In the story that seems to be perpetually stuck in the 1980s, Adam graduates from high school and postpones going to college for a year, working multiple odd jobs instead. Before serving as the entertainer/waiter at the 1950s-themed diner, he was part of a production of a film starring David Hasselhoff.

Carmen’s introduction scene involves a dance number in which Adam performs as Biff from the ‘Back to the Future’ trilogy. Carmen, a new employee at the diner, joins the performance. That night, Adam cancels the movie-night plans with his mother to go out with Carmen and other colleagues. After the others leave at Carmen’s suggestion, she and Adam spend the evening drinking.

The following morning, Adam wakes up with little memory of what happened, but Carmen fills him in. They made out for a while before Adam fell asleep on her couch. 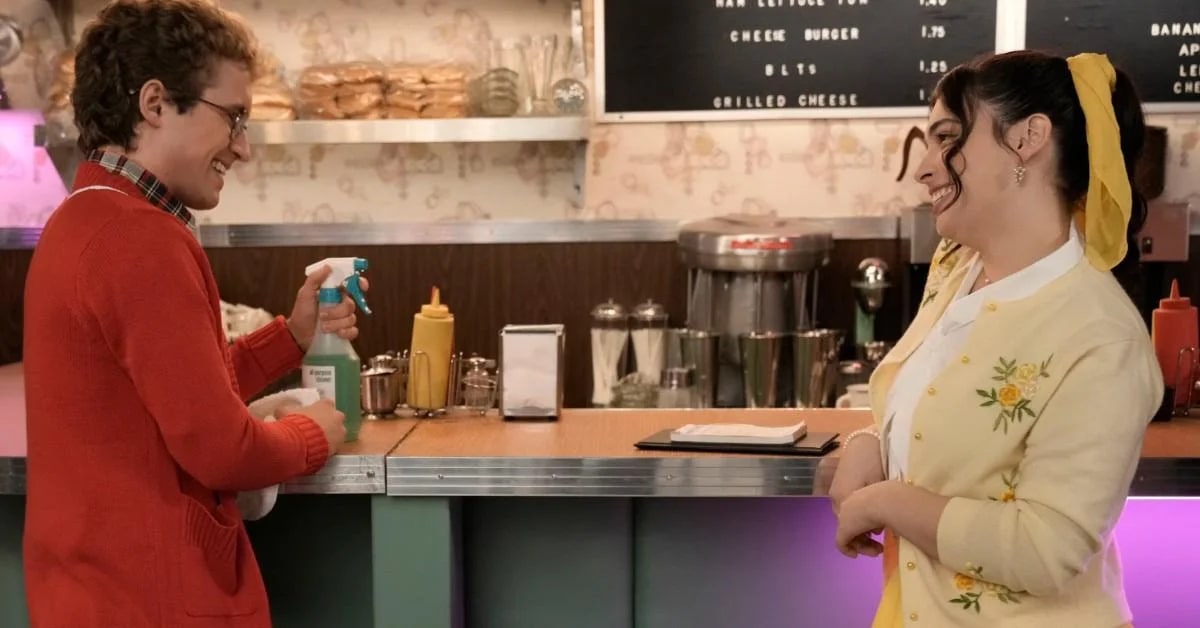 When Adam returns home, a distraught Beverly demands to know where he has been. True to her character, she apparently declared a million-dollar reward to get her beloved son back. It must have taken quite an explanation from Adam to make the officer who found him understand that he would not get that money.

Predictably, Beverly reacts negatively to her son’s new assertion of freedom and even brings Brea Bee, Adam’s former girlfriend, back to Jenkintown, Pennsylvania, under false pretenses to make Adam stop seeing Carmen. Eventually, after a conversation with the girl in question, Beverly realizes that if she wants to be part of her son’s future, she has to respect his boundaries.

In ‘The Goldbergs,’ Colombian-American actress Isabella Gomez portrays Carmen. Born in Medellín, Colombia, on February 9, 1998, Gomez started her career as an actress very early, at age 5. About five years later, she moved to Orlando, Florida, with her family. In 2015, they moved again, this time to Los Angeles, California, so Lopez could earnestly follow her dream of becoming an actress.

While she was in Orlando, Lopez worked with a voice coach on her accent. One of Lopez’s first major roles was as Cristina Sandoval in El Rey Network’s 2014 series ‘Matador,’ which was canceled after one season. She worked in the 2019 direct-to-video film ‘A Cinderella Story: Christmas Wish,’ portraying the character Isla before making her big-screen debut with the 2020 slasher film ’Initiation.’

Gomez is arguably most known for playing Elena Maria Alvarez Riera Calderón Leyte-Vidal Inclán in the Netflix sitcom ‘One Day at a Time.’ Her performance as Elena Alvarez earned her an Impact Award from the National Hispanic Media Coalition for her “Outstanding Performance in a Television Series” in 2020. In 2021, she worked in HBO Max’s ‘Head of the Class,’ a short-lived reboot based on the original ABC namesake series from the late 1980s and early 1990s.

Following the announcement of her casting in ‘The Goldbergs,’ Lopez took to social media to express her excitement. “Feeling so lucky to get to slip into this incredibly well oiled machine ran by some of the most welcoming humans in show business,” she wrote on Instagram.

Read More: What Does the JTP Mean in The Goldbergs? Are They Based on Real People?