Who is Solryth in The Witcher Blood Origin, Explained 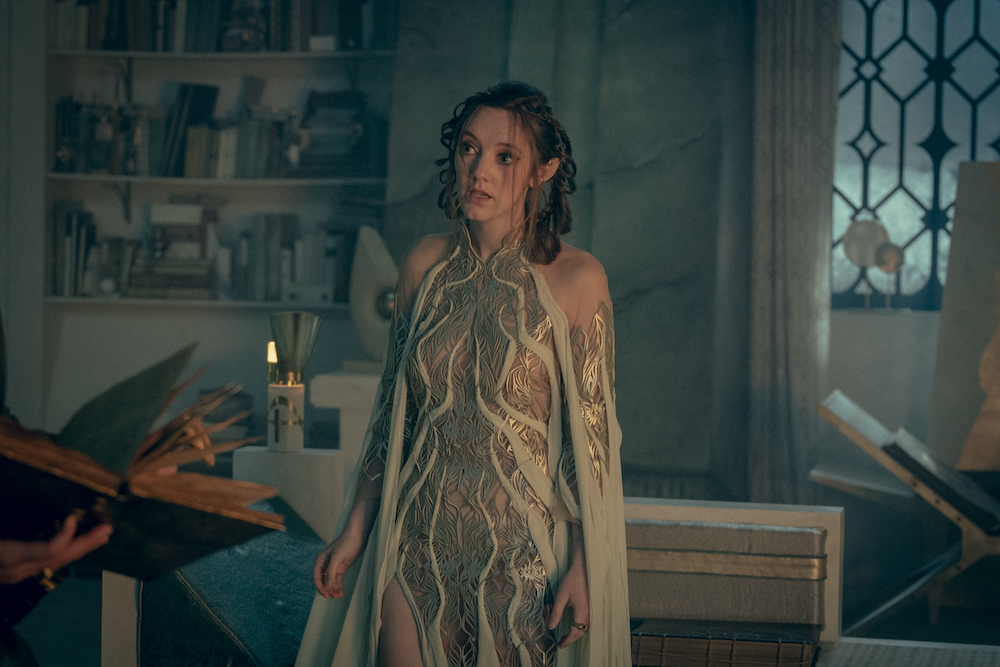 Netflix’s ‘The Witcher: Blood Origin’ is set 1200 years before the events of ‘The Witcher’. The prequel series gives context to many mysteries in the original series, especially the ones surrounding Ciri. It follows the story of the seven who fought against the mighty power of Xin’trea and its army in the quest for revenge and justice. The series explores all the backstories of all these characters, while also dropping information about the past that further reaches back, expanding the timeline of ‘The Witcher’ universe. Solryth’s story is one of the things that make us wonder about the events that took place before ‘Blood Origin’. If you want to find out more about who she was and what her importance is in the events of the prequel series, then here’s what you need to know. SPOILERS AHEAD

Solryth is an elven Empress who is known for ushering the Golden Age of the elves on the Continent. She never appears in ‘Blood Origin’ because her story is a part of another timeline. She came around 1500 years or so before Merwyn’s time and was essentially the force that wiped out the dwarves, pushing them to the same status that in the next thousand years elves would find themselves in when the humans take over.

Before the elves ruled the lands, the Continent was under the dwarves. They were known for creating unique things like the Monoliths, which eventually become instrumental in the events of ‘Blood Origin’ as well as ‘The Witcher’. Solryth was an elven warrior who found her way to the Continent after she had unknown conflicts in her lands. The twin comets in the sky became her compass and led her to her new kingdom. It is after her that they were named and came to be known as Solryth’s Eyes.

Once on the Continent, Solryth and her armies lay waste to the dwarves and forced them out of their own lands. In her brutality, she wiped out generations of dwarves, so much so that by the time the events of ‘Blood Origin’ take place, dwarves are a rarity on the Continent. With her as the new empress of the Continent, the golden age of the elven rule began. She brought the art and culture of elves to her new kingdoms and destroyed the previously established dwarven culture.

As good as things were under Solryth’s rule, things took a turn for the worse when she died. In the lack of a capable successor of the empress, the Continent split into three kingdoms that have been at war with each other ever since. These wars have brought nothing but poverty and hunger to the people of the kingdoms, but the ego of the rulers has kept the strife alive for so many centuries. At the beginning of ‘Blood Origin’, we find Merwyn’s brother, the new emperor of Xin’trea trying to end this conflict by forging new relations with the other two kingdoms.

Merwyn, who has read up on the history of the Continent rather deeply, worships Solryth. She dreams of ushering in another golden age for the elves, much as Solryth did. When she finds out about the other worlds, which Sage Balor accesses through the Monoliths, Merwyn realizes that she has the same opportunity that Solryth once had. There are untamed foreign lands out there, and much like Solryth conquered the Continent, Merwyn dreams of taking things a step further and conquering other worlds.

This desire to become the next Solryth is what drives Merwyn to become a part of the coup that leads to the death of her own brother. She wants to be revered just like her hero and wants to be known as someone who saved the elves from death and destruction. She wants to “civilize” the other worlds with elven culture and this is what pushes her to do unspeakable things. In this context, even when Solryth has been long gone from the face of the Continent, her legacy lives on and inspires people like Merwyn to create their own twisted schemes.

Read More: Who is the Narrator of The Witcher: Blood Origin?