Who is the Narrator of The Witcher: Blood Origin? 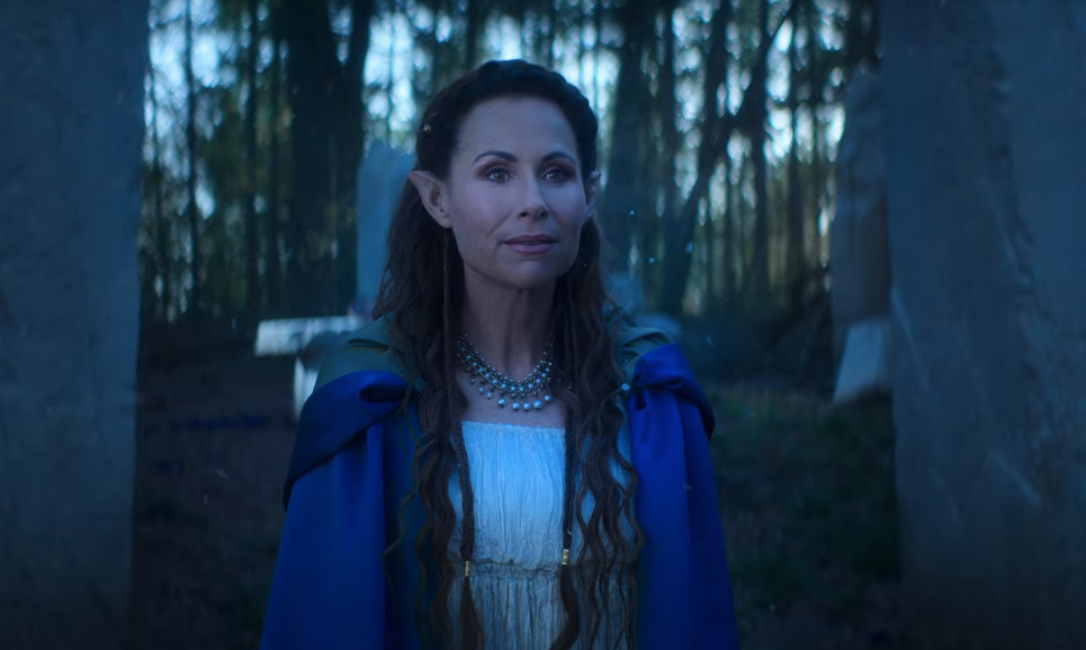 Netflix’s ‘The Witcher: Blood Origin’ takes place 1200 years before the events of ‘The Witcher’. Still, the events connect deeply with the story of Ciri, Princess of Cintra, whose arc drives the story of the show. In the prequel series, we get to meet a couple of characters who will become instrumental in Ciri’s story in the future, while also receiving some answers about the Continent’s past, especially in Ciri’s context. This story is told to Jaskier by someone who is unlike anyone the bard has met before. Despite giving a detailed account of the Story of the Seven and painting a picture of the Continent before the Conjunction of the Spheres, very little is known about the narrator herself. Who is she and how does she relate to ‘The Witcher’? Let’s find out.

Who is Narrating the Story to Jaskier in Blood Origin?

While the character never names herself, she is called SeanchaÍ. She is an elf who possesses the unique ability to travel in space and time. She “slips between worlds and time” and collects stories that are long forgotten. She brings them back when the world needs them the most. On top of this, she also has the power of shapeshifting, which is how she takes Jaskier’s form when she introduces herself to him.

Because SeanchaÍ is an original character created for ‘The Witcher: Blood Origin’, very little is known about her and how she’ll fit into the upcoming seasons of ‘The Witcher’. However, the nature of her powers gives us enough to go on with. Despite the Continent being a place full of monsters and magic where all sorts of things happen, the ability to travel between worlds and in time is still a rare one. In fact, it is limited to the people who possess what is known as the Elder Blood.

The Elder Blood is found in the descendants of Lara Dorren, who herself was a powerful elf with special abilities. By the time the events in ‘The Witcher’ take place, there is only one person left of her bloodline: Ciri. The Elder Blood running in Ciri’s veins gives her special powers, which she finds difficult to control. At the end of ‘The Witcher’ Season 2, Ciri unintentionally travels into another world where she comes face to face with the Wild Hunt. This confirms that she too has the power to travel between worlds, which means that, in some way, she and SeanchaÍ share the same DNA.

Another interesting thing about Ciri, and hence, SeanchaÍ, is revealed in the final episode of ‘Blood Origin’. Eile gets pregnant after she and Fjall have sex after he has already transformed into a Witcher-like creature. This means that not only does he have his original elven blood, but he also has the Chaos energy extracted from the heart of the monster from another world. This means that Eile and Fjall’s child will have the best of both worlds when it comes to inheriting powers.

The fact that Eile and Fjall’s child has blood from another world would connect the child to that other plane, the one that most mages travel using the Monolith. The existence of the Chaos energy makes it easier to open pathways between worlds, as exhibited by Balor when he sends Eredin and his men to yet another world. This Chaos energy was infused in Fjall’s blood which means that his descendants have it too. This means that SeanchaÍ is in some way connected to Fjall as well as Ciri, creating a strong possibility for her to return in ‘The Witcher’ Season 3.