The Witcher Blood Origin Ending, Explained: What Happens to Eredin? 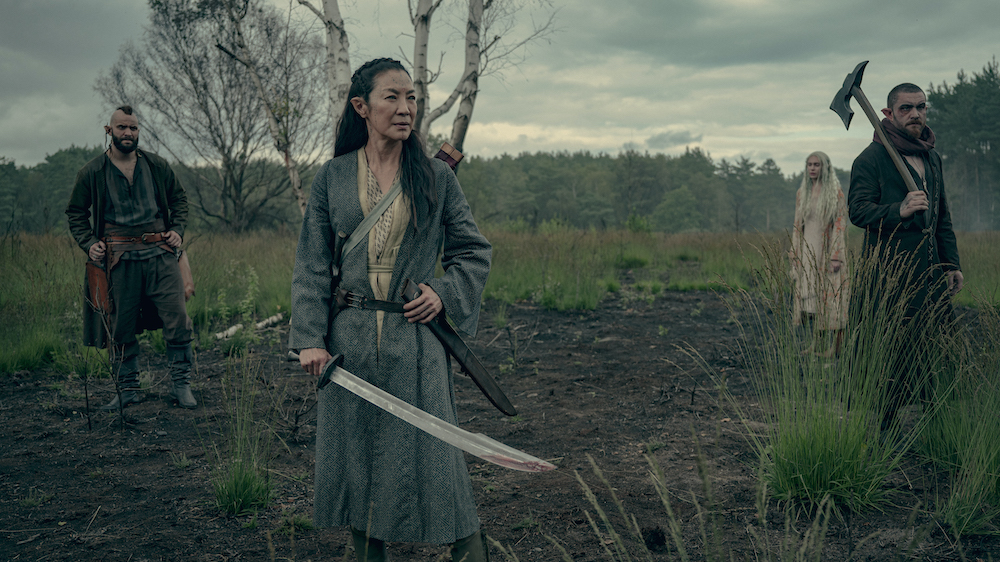 Netflix’s ‘The Witcher: Blood Origin’ is a prequel series that takes place more than a thousand years before the events of ‘The Witcher’. The series is set in a world where humans haven’t yet established their dominance. In fact, they are nowhere to be seen. The world is still under the rule of the elves, but several circumstances lead to their downfall. In its four episodes, ‘Blood Origin’ not only gives us an explanation for several mysteries in ‘The Witcher’ but also introduces the characters that are going to become important players in the story of Ciri and Geralt. Here’s what the ending means for ‘The Witcher’ universe. SPOILERS AHEAD

Eile and Fjall are elven warriors belonging to rival clans, but both of them have been thrown out for different reasons. They are forced to go back and fulfill their responsibilities as the protectors of elven kingdoms when a massive power takeover happens in Xin’trea. Princess Merwyn and Sage Balor conspire to kill the monarchs of the three kingdoms and Merwyn is crowned as the Empress. In this process, they kill Eile and Fjall’s clans, which leads them to plan revenge on Merwyn.

While Merwyn tries to exercise some control over her newfound kingdom, Sage Balor uses his access to the other worlds via the Monolith to gain Chaos magic at a terrible price. Eile and Fjall add more warriors to their group. Eile’s former mentor Scian, a sellsword named Brother Death, a dwarf named Meldof and her hammer Gwen, and celestial twin mages Zacare and Syndril become part of this journey that ends in Xin’trea, leading to a catastrophic turn of events that forever changes the face of the Continent.

The Witcher Blood Origin Ending: What Does Ithlinne’s Prophecy About Eile’s Child Mean?

In the end, Eile, Fjall, and the others mount an attack on Merwyn, and things go considerably smoothly for them. Fjall, powered by the spells of Zacaré and Syndril and turned into the first prototype of a Witcher, kills the beast from the other world. However, he is unable to control the Chaos energy from the other world and becomes a beast himself. Before he can inflict more damage, he is killed by Eile.

Meanwhile, Zacaré and Syndril team up to stop Balor. Syndril links with him and the Monolith and uses Balor’s powers to destroy the Monolith and close the window between the worlds. But the plan backfires and the destruction of the Monolith creates a tear between the worlds and everything spills from one to another. This leads to the Conjunction of the Spheres, which brings humans as well as monsters from other worlds to the Continent, forever changing the course of events.

A few months later, we find Eile pregnant. Knowing that Ithlinne’s prophecy had come true, word to word, she asks the girl to look into the future of her unborn child, and this is what Ithlinne says: “The time of the spheres is upon us. Aen Seidhe lost across the skies. Cast adrift in time. Ever searching for love… Lost. And left behind. The Lark’s seed shall carry forth the first note of a song that ends all times, and one of her blood shall sing the last.” Here’s what it means.

“The time of the spheres” clearly refers to the Conjunction of the Spheres which has already led to the arrival of humans. The infestation of monsters has also become a problem by this point, as we find an elf putting up posters to hire monster hunters, indicating the fact that the creation of proper Witchers is going to take place soon or is already happening by now. The prophecy also talks about the Aen Seidhe, the elves, who, by the time Geralt and Ciri arrive, will have become a rarity on a planet that they previously ruled.

The phrase “lost across the skies” and “cast adrift in time” is also interesting because it directly points toward Eredin and his men, who were thrown into another dimension by Balor. No one knows what happened to them, but their mention in Ithlinne’s prophecy points toward the fact that their story is far from over. They will be back, though radically different that the elves they were when they left. This also establishes a direct connection between ‘Blood Origin’ and ‘The Witcher’ Season 3, where Eredin and his men will return as The Wild Hunt.

The final part of the prophecy talks about “The Lark’s seed” and how it will start the process of the end of times. The one who “shall sing the last” note is Ciri. In ‘The Witcher’, there is already a prophecy about how she will bring about the end of the world. She is also the one with the Elder Blood who will save the elves. It is the Elder Blood that gives the powers that have turned her into the most wanted person on the Continent.

‘Blood Origin’ establishes her origins, indicating that she is a descendant of Eile and Fjall’s child, who has both the elven blood as well as the Chaos energy from Fjall’s transformation. Hence, Ithlinne’s prophecy in ‘Blood Origin’ not only reiterates what we already know about Ciri and her future, but it also gives us some answers about the origins of her powers, which will further explain more aspects of her powers, which are sure to be explored in the upcoming seasons of ‘The Witcher’. 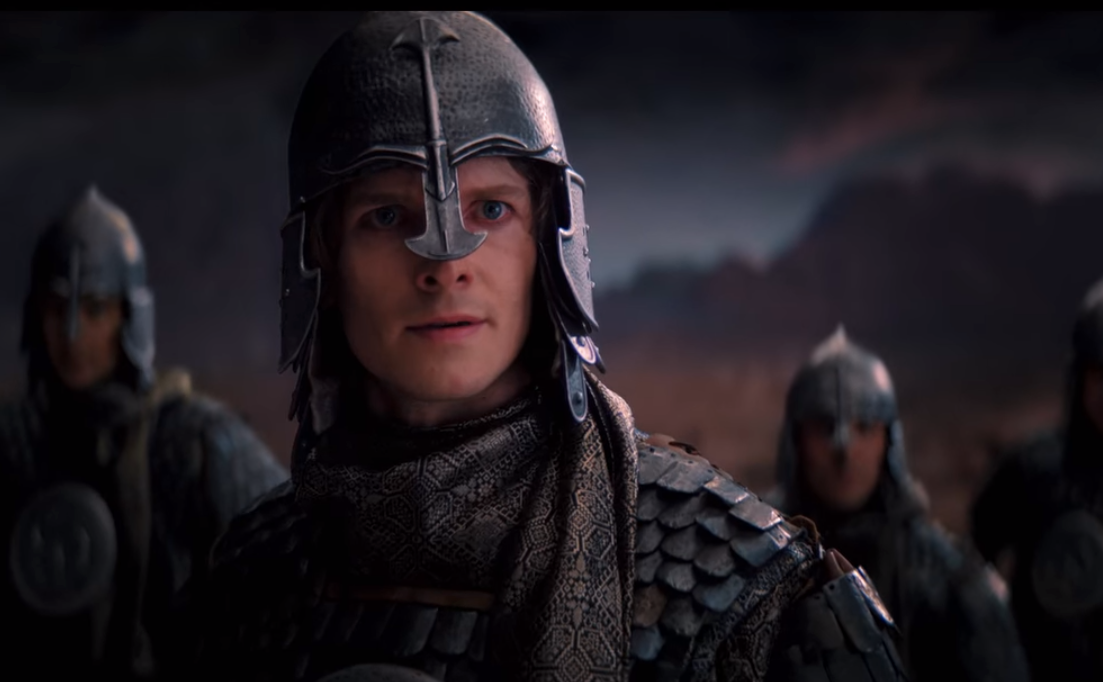 While there is a lot that happens in ‘Blood Origin’, the most interesting things happen at the end. While Ithlinne’s prophecy creates a kind of roadmap for Ciri’s future, another scene gives us an insight into a character that is going to feature prominently in the coming ‘The Witcher’ seasons. This character is Eredin, who also features in Ithlinne’s prophecy as the one lost in space and time.

Eredin was introduced as a soldier who first collaborates with Sage Balor to take over control of Xin’trea, but then defects to Merwyn when she finds out that he is in a relationship with a lowborn elf named Brian. Merwyn sends Eredin and a group of soldiers with Balor to another world, hoping that they will find another world that will solve the Continent’s famine problem. Once that’s done, the Empress plans to invade the new worlds and “civilize” them with the elven art and culture.

No matter how ambitious, Merwyn’s plans go unrealized when Balor, as expected, betrays her. Once in another world, he kills Fenrick, and the sacrifice gives him the power of Chaos energy. He uses it to throw Eredin and his soldiers into yet another world where he hopes they “burn for all eternity”. Later, Eredin finds a skull helmet that looks a lot like the one worn by the Wild Hunt at the end of ‘The Witcher’ Season 2.

While the series is yet to explore the nature and origins of The Wild Hunt, Eredin’s fate gives us a backstory for who will later come to be known as the King of the Wild Hunt. According to the books, they are spectral forms that are considered to be the omen of war. Also known as the Wraiths of Mörhogg, they were elven warriors who traveled from one world to another to find slaves to take back to their own world. However, it looks like the show is going to come up with its own take on the Wild Hunt, and a whole new portrait might emerge as to who they were.

Extrapolating from the ending of ‘Blood Origin’, it seems like Balor’s curse will take effect and Eredin and his men will burn for all eternity. Caught in a foreign world that already seems to have met its end, Eredin has no way to escape. He will have to accept this new reality and change himself according to the new world. His donning the helmet points towards that fact. Because he is cursed for all eternity, it also explains how he will still be alive 1200 years later when Ciri opens the portal into the world that he is trapped in.

This also directly links to the ending of ‘The Witcher’ Season 2, where the Wild Hunt comes face to face with Ciri for the first time. Just like Syndril and Zacare could sense the otherworldliness of Chaos energy in their world, it is possible that the Wild Hunt sensed Ciri’s energy. This would also have been the first time in a long time that Eredin saw someone use magic to pass through the worlds, which is why perhaps he and the Wild Hunt will set their eyes on Ciri. They need her powers as it is their ticket out of the world that they are trapped in.

The ending of ‘Blood Origin’ seals Eredin’s fate, setting him on a path that will lead to the events of ‘The Witcher’ Season 3. Eredin is set to be the villain of Ciri’s story, but his arc in the prequel series does a good job of giving us a sense of who he is and what his motivations are for the things he is to do in the future.

Read More: Where is Netflix’s The Witcher Blood Origin Filmed?