Why Does Angela Let Harrison Go in Dexter: New Blood? Where Is Harrison Going? 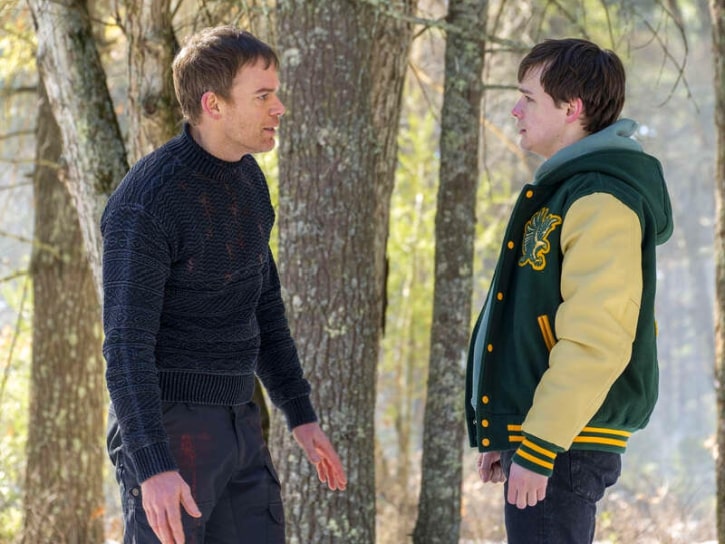 In the final episode of ‘Dexter: New Blood’ season 1, Harrison (Jack Alcott) is forced to grow up fast. He has found out that he shares his murderous urges with his father, who has begun teaching him how to use them to save people and bring down killers and criminals. However, he discovers that his father is willing to break the code that he claims to follow when he is desperate enough to do so. Eventually, there is a confrontation between the two of them after Harrison learns that Dexter has Killed Logan. Horrified and disgusted, Harrison accuses his father of destroying the lives of those around him, including Deb and Rita, a charge that Dexter accepts. And then, it seems that both realize what’s going to happen next, and they are at peace with it.

Harrison kills Dexter before Angela’s arrival. She gives him money and tells him to take his father’s truck and leave Iron Lake. If you are wondering why Angela doesn’t take Harrison into custody and simply lets him go, we got you covered. SPOILERS AHEAD.

Why Does Angela Let Harrison Go in Dexter: New Blood?

The answer to this question is embedded in the title of the finale: ‘Sins of the Father.’ Dexter’s past has finally caught up with him, but that doesn’t mean that Harrison needs to suffer for it as well. Throughout his life, the boy has been forced to endure horrors and hardships because of his father’s actions. Angela, driven by her maternal instincts, liberate him out of that vicious cycle. She gives him a chance of a fresh start, where he doesn’t necessarily have to be hounded by his father’s ghost.

Before he leaves, a part of him wants to say goodbye to Audrey, but he knows he can’t. When he requests Angela to say goodbye to Audrey at his behest, she says she can’t either, revealing that she will tell the others that she hasn’t seen him that day. She will claim that she killed Dexter in self-defense. As Harrison drives out on his father’s truck, Angel Batista and other officers arrive in the town.

Where Is Harrison Going?

Dexter wanted to go somewhere sunny, like Los Angeles, California. Harrison initially had no desire to leave Iron Lake as his friends and Audrey were there. But by the end of the finale, he has come to see the logic behind it. The Dark Passenger is still within him. Killing his father didn’t exorcise it, but gave it a purpose. And it will stir again in the future. When it does, he will need the anonymity that only a big city can offer. So, yes, it can be Los Angeles, just like Dexter wanted, or it can even be Miami, the native town of both his parents.

Read More: How Did María LaGuerta Die in Dexter? Who Killed Her?