Why Did Harrison Kill Dexter at the End of Dexter: New Blood? 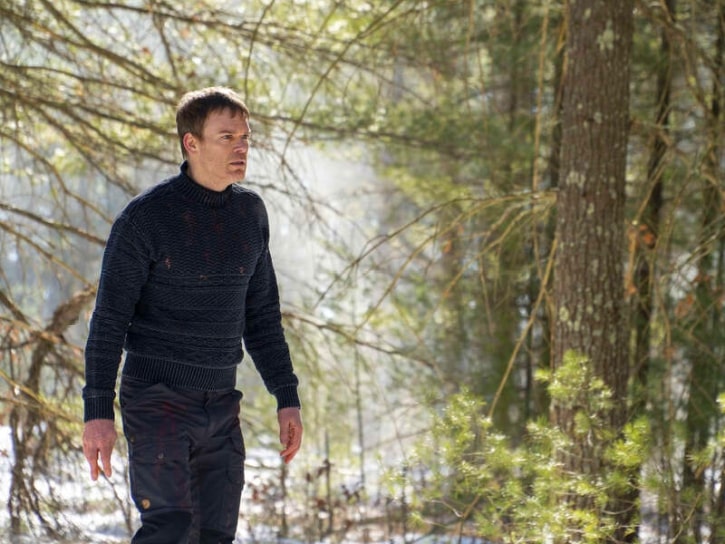 Dexter Morgan (Michael C. Hall) is the central character of both the original and the revival series. He is a psychopath and a serial killer, but his victims are all criminals and murderers. When he was three years old, his mother was killed and dismembered before his eyes, which had a profound impact on his psychosis. His adoptive father, Harry, recognized the disturbing signs quite early and decided to steer his murderous urges toward something positive.

The revival series finds the protagonist living in the New York town of Iron Lake under the alias Jim Lindsay. However, Dexter’s Dark Passenger returns with a vengeance, and he kills a murderer who has escaped justice. Dexter reunites with his son but discovers that the boy has inherited the darkness from him. As the revival series progresses, things start to get so out of control that it seems that even Dexter wouldn’t be able to survive the storm this time around. If you are wondering whether Dexter lives or dies at the end of ‘Dexter: New Blood,’ we got you covered. SPOILERS AHEAD.

Why Did Harrison Kill Dexter?

Dexter Morgan is dead at the end of ‘Dexter: New Blood.’ Dexter’s teenage son, Harrison, kills him. In an interview with Deadline, series creator Clyde Phillips confirmed Dexter’s death in no uncertain term. Asked whether Dexter really had to die or whether it was an avoidable outcome, Phillips stated that it was necessary to kill the character. “Yes. We knew this had to happen, and I think it had to happen for the audience as much as for the character,” he said. “To see him get caught time and time again and get out of it at a time and time again is a disservice to the audience. And I think there’s a certain truth in this storytelling, in authenticity in the storytelling.”

Phillips told Hall about his ideas about the main character quite early in the process. He revealed that Hall gave him a hug and said he was in. In the ‘Dexter: New Blood’ finale, it seems that Dexter finally gets some semblance of comeuppance. When he learns that Angel Batista is coming to Iron Lake to arrest him, he kills Logan in his attempt to get to his son. When Harrison finds out about it, he is as livid as he has ever been. He accuses his father of not adhering to the code. When Jim decides to leave just by himself, Harrison points his rifle at him. It’s the same gun that Dexter gave Harrison for his birthday.

The stand-off between the father and the son becomes the definitive moment of the show. It’s when the baton is passed. After killing Logan, Dexter has become the very thing that he has hunted all these years. By killing him, Harrison establishes himself as his successor. Harrison is the purer and more innocent version of Dexter. While he has seen the horrors that humanity is committing, he approaches life with a certain amount of positivity. So, even though he has inherited his father’s Dark Passenger, it doesn’t mean that his life will have the same trajectory as Dexter’s.