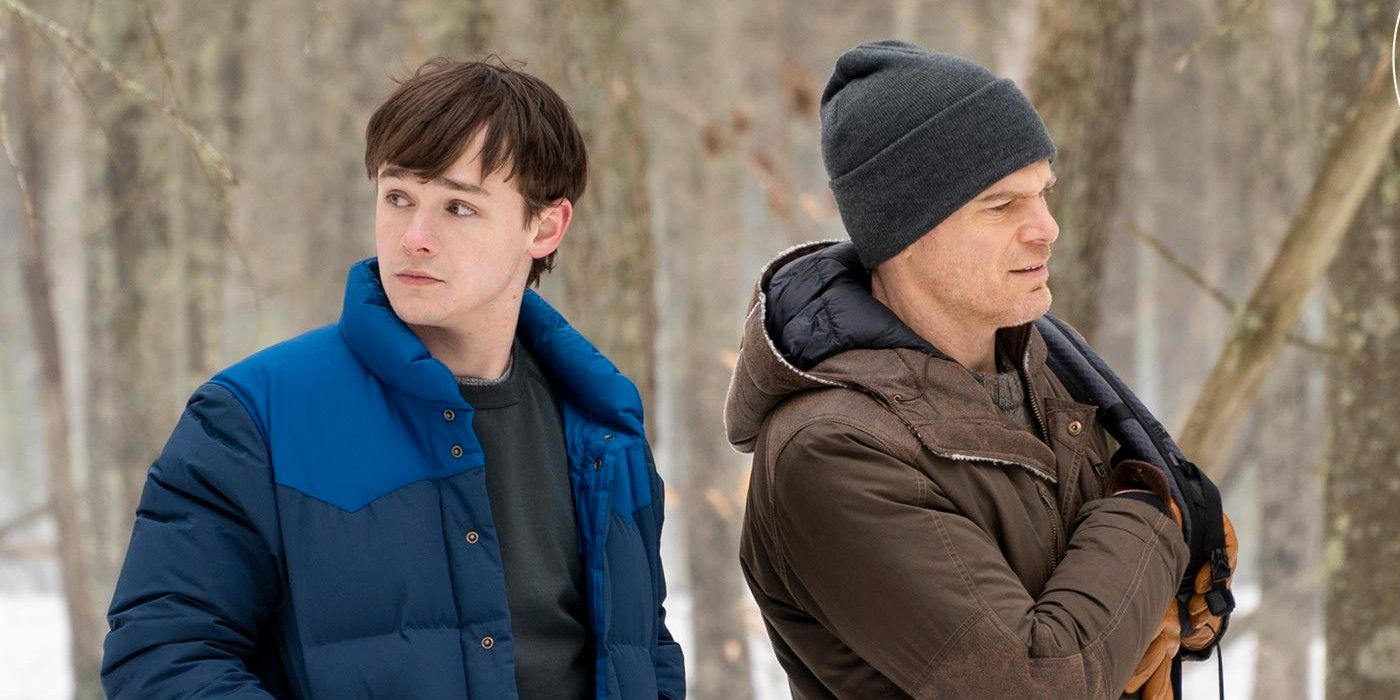 The revival series ‘Dexter: New Blood’ is set a decade after the original show. The eponymous character (Michael C. Hall) is as far away from the sunny Miami in the newer series as he can be. He now lives in the snowy town of Iron Lake, New York, and works at a fish and game store. He hasn’t killed anyone since the time he faked his death and vanished. However, his Dark Passenger returns when he meets Matt Caldwell, who perfectly fits his modus operandi. The night he kills Matt, he finds Harrison (Jack Alcott), the son he left behind, has come searching for him.

As the series progresses, Dexter discovers that Harrison has inherited his Dark Passenger and has to fight to save his soul from Matt’s father, Kurt (Clancy Brown), who is also revealed to be a serial killer. Ultimately, Dexter’s girlfriend, Iron Lake Police Chief Angela Bishop (Julia Jones), finds out the truth about him and orchestrates his undoing. Here is everything you need to know about the ending of the ‘Dexter: New Blood’ finale. SPOILERS AHEAD.

The finale, titled ‘Sins of the Father,’ begins as Angela listens to Molly’s (Jamie Chung) recordings for what would have been her podcast on Matt and Iron Lake. As she hasn’t heard from Molly for over 72 hours, Angela puts an APB out on her. Meanwhile, as Dexter stands in front of the ruins of his home, he looks around and sees that his neighbors are there to help him. This makes him recall that he picked Iron Lake as the place to stay because of the good people there.

Angela tells Dexter that his cabin was burned down because of arson. Harrison finds the perfect lie for his father and tells Angela that it might have been the boys that attacked him earlier for breaking their friend’s arm. She later finds Matt’s screw (the one that Dexter had) in the rubble. She then goes back home, sends both Audrey and Harrison out before arresting Dexter for Matt’s murder with Logan’s help.

The decade-long hiatus from killing has made Dexter sloppy and prone to making mistakes. But he hasn’t lost much of the sharpness of his intellect. He knows the evidence that Angela has gathered will not be enough to convict him. Angela knows this as well and suddenly has an idea. She calls Angel Batista, whom she met when she was in New York City with Molly, and sends him a photo of Jim Lindsay/Dexter Morgan. After all these years, Angel realizes that his former wife, María LaGuerta, was right all along.

Afterward, she tries to interrogate Dexter once more, informing him that she has figured out that he is the Bay Harbor Butcher and that Batista is on his way to Iron Lake. Realizing that it’s probably the end of the road for him, Dexter plays his last hand. He asks Angela to turn off the camera before revealing the truth about Kurt and where the older Caldwell had hidden the bodies of his victims for the past 25 years.

After sending Angela away, Dexter tries to subdue Sergeant Logan so he can get out of his cell, but the officer reaches for his gun, and Dexter ends up killing him. He then calls Harrison from Logan’s phone and asks him to meet up with him with their pick-up truck. After killing Kurt and seeing that his house had been burned down, Dexter realized that he and Harrison would have to leave Iron Lake and find a home somewhere else. Predictably, Harrison was reluctant, as all his friends and Audrey were in Iron Lake. But after witnessing Dexter’s arrest, Harrison had probably figured out that it was not safe for them in the New York town.

However, the moment he sees bloodstains on his father, Harrison makes the connection and realizes that Dexter has killed Logan, who is an innocent man. This completely goes against the code his father claims to follow. It’s a moment of sobriety for the audience as well. Many of us have come to see Dexter as an anti-hero or vigilante when in reality, he is an anti-villain whose inner monster is guided by a set of dos and don’ts. The very fact that Dexter kills Logan to reunite with Harrison proves that the code is not absolute for the former CSI.

After Harrison refuses to come with him, Dexter declares that he will leave Iron Lake alone. However, his son points the rifle he received for his birthday at him. Harrison accuses his father of causing the deaths of Deb and Rita, a charge that Dexter accepts. In this remarkable scene, Dexter passes the proverbial baton to his son. He is now no different from all those murderers he killed. When Harrison kills him, he becomes what Dexter used to be. And Dexter, in turn, becomes his first victim.

Angela arrives and lets Harrison go, telling him never to come back. In his father’s truck, Harrison finds a letter Dexter wrote to Hannah about him being alive and his hopes for Harrison. As Harrison drives out of Iron Lake, he carries the Dark Passenger, his father’s legacy, with him.

Read More: Is Dexter Based on a Real Life Serial Killer?