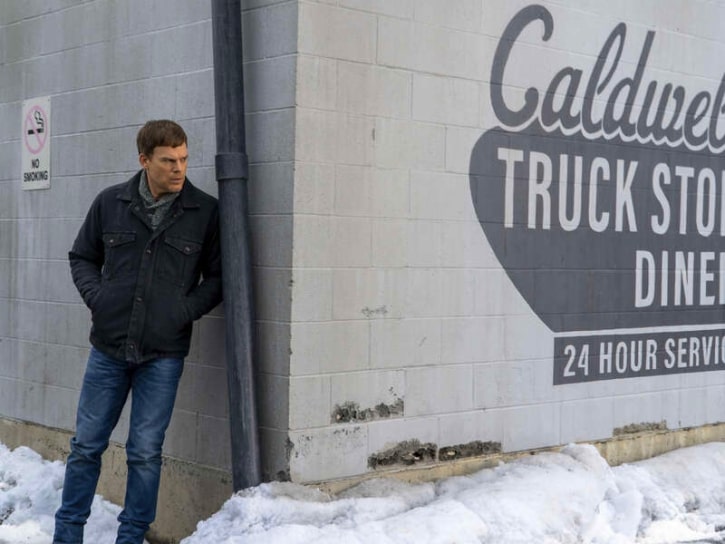 In ‘Skin of Her Teeth,’ the seventh episode of the revival series, ‘Dexter: New Blood,’ the predator turns protector.’ Jim Lindsay (Michael C. Halbecomesome Dexter Morgan one more time as Angela (Julia Jones) asks the former Miami Metro forensic expert to find out what happened to her friend. The Dark Passenger within Harrison (Jack Alcott) continues to manifest, and he admits certain things to his father. Kurt (Clancy Brown) is arrested, but the case against him starts to fall apart the moment he gives his confession. Angela and Molly (Jamie Chun) begin to suspect that there is something unsettling about Dexter. Meanwhile, a popular character from the original ‘Dexter’ series makes an appearance, albeit in a flashback scene. Here is everything you need to know about the ending of ‘Dexter: New Blood’ episode 7. SPOILERS AHEAD.

Episode 7 begins where episode 6 left off. Dexter arrives at the caves and dawns surgical gloves, basically turning back time. As he tells Angela, Iris was still alive when she was buried under the rocks. He also finds a piece of skin trapped in one of the teeth of the deceased but warns Angela to temper her expectations as there is a considerable chance that the DNA test on the skin will not reveal any significant result, given that the sample has been left exposed to the environment for the last 25 years.

Later, he argues with Conscience Debra (Jennifer Carpenter) about killing Kurt. Interestingly, for the first time, Debra says that he should do that. Her shirt suddenly appears to be soaked in blood, reminding Dexter what happened the last time he left it to the authorities to punish a murderer. Audrey starts to avoid Harrison at school, likely realizing that his penchant for violence is much more severe than she can possibly comprehend. Angela already has Kurt’s DNA samples from when he voluntarily gave them to the police while they were still searching for Matt. The samples collected from the caves come back, matching more than 60% with Kurt’s. However, Kurt speculates that his abusive father killed Iris, effectively offering a believable explanation for the test results. And Angela has no choice but to let him go.

After stepping in to stop the fight between Harrison and the friends of the boy whose arm he broke, Dexter tries to speak to his son as the latter opens up to him. But misunderstanding comes once more between them, and Harrison leaves. Just before the episode ends, Dexter is ambushed by a man from behind. This individual appears throughout the episode. He offers Harrison money to help him unload his truck. Before parting ways, he gives the boy an envelope for his father. When the latter opens it, he finds a titanium screw inside.

This man is most likely a hired killer, and his name is Elric Kane. While rummaging through Kurt’s office, Dexter finds an identical envelope to the one he was sent. But this one has a check for $5,000 for Elric Kane inside. Kurt has found out that Dexter killed his son. From his personal experience, Dexter knows that it’s never a good idea to kill a family member of a serial killer. And evidently, he has been proven right. Kurt has hired someone to kill him.

Did Dexter Kill the Trinity Killer?

Yes, Dexter killed Arthur Mitchell or the Trinity Killer in ‘The Getaway,’ the season 4 finale of the original series. He sedates Arthur and brings him to the fallout shelter where Arthur hid the abducted boy. Arthur asserts that God has brought Dexter to him and is disgusted when the latter collects his blood sample, claiming that he never enjoyed murdering people. He also claims that he tried to stop himself several times and even prayed that God would send someone to stop him. It’s apparent that Kurt thinks that Dexter is that someone. After Dexter kills the Trinity Killer, he returns home to discover Rita’s body in the bathtub and Harrison sitting in his mother’s blood, in the eerily same way he did when Harry found him all those years ago.

Does Harrison Remember What Happened to His Mother?

Episode 7 finally reveals that Harrison remembers what happened to Rita, his mother. He used to have nightmares about it. However, after listening to Molly’s podcast, all the memories came rushing back. It is revealed that Arthur actually spoke to him after killing Rita, telling him in a gentle voice that his father would be home soon. A distraught Harrison comes to think his father has always known that something is horribly wrong with him, and that’s why he left. Before Dexter can correct him, Harrison leaves by hitching a ride in the car of one of his new friends.

What Happened to Iris?

Iris was apparently Kurt’s first kill. He just started driving trucks at the time. One night, he spotted Iris and offered her a ride. Realizing that she was running away, he told her that he would take her home. When she tried to jump out of the vehicle, Kurt grabbed her, prompting Iris to bite him on his hand. And that’s why his skin was found in her teeth. As she jumped out, he grabbed his hunting rifle and shot her.

This later became part of his modus operandi. Angela would have never found Iris’ remains if Kurt hadn’t lied to stop the search for Matt. He knew that it would eventually lead them to the caves, and the secret he has been hiding for a quarter of a century will be exposed.