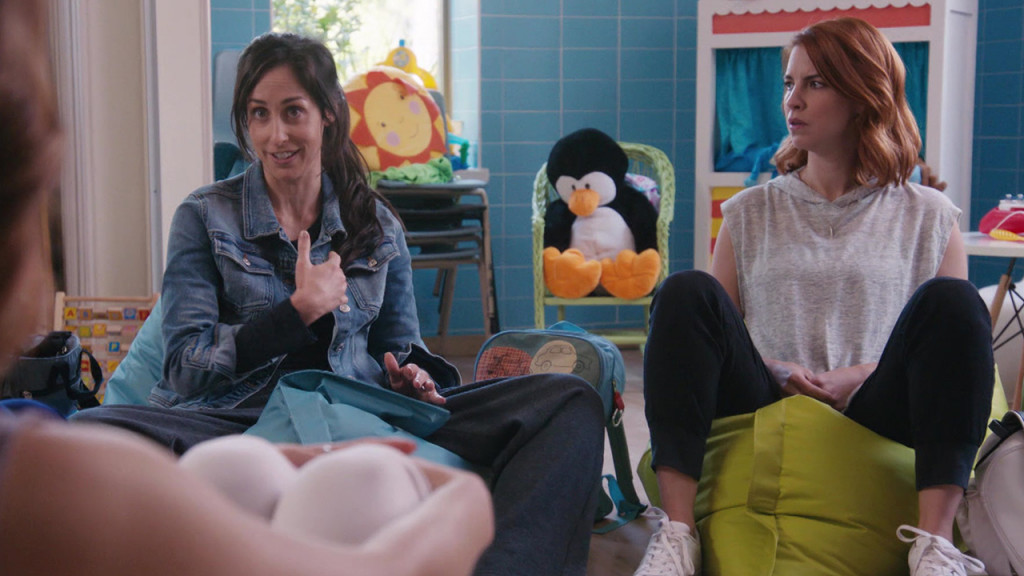 ‘Workin’ Moms‘ is a Canadian comedy series that is created, written, and directed by Catherine Reitman. Reitman also stars in the television series, playing the character of Kate Foster while her real-life husband portrays Kate’s partner. The series has proven to be relatable and hilarious for everyone, and its appeal has not been limited to mothers only. Moreover, the show shies away from puritanical standards of motherhood and chooses to depict its maternal characters as perfectly flawed people who don’t always make the right choices. By doing so, the show squashes the impossible, societal expectations of working mothers. Moreover, that also proves to be the source of most of the laugh-out-loud humor on the show.

Each major character is shown to be going through a different experience of motherhood. There is Kate, an ambitious businesswoman who attempts to juggle motherhood and professional responsibilities. Then, there is Anne, who struggles to parent a tough, hormonal teenager. Apart from that, Frankie is a homosexual woman who begins the show facing postpartum depression. Meanwhile, Jenny is a divorced woman who is not the most…enthusiastic about her parental role.

Kate: Kate begins the fourth season having reunited with Nathan officially. She tells her friends about it, but Anne isn’t particularly supportive of her decision. At her firm, Kate Foster PR, she repeatedly clashes with Mike over their clients. One of their clients is Après, a company that seeks to launch a weed beer. Anne’s daughter, Alice (who is interning at Kate’s firm), is caught throwing a party at Kate’s office with her friends having finished the Après samples. Kate finds out that Mike was also at the party and that he was the one who had given the underage attendees the Après cans. She fires him.

Nathan’s parents are forced to move in with Kate and Nathan due to their financial situation. Kate and Nathan decide to make them move to a tiny apartment, whose rent the couple agrees to pay. Kate is the only earning member of the family. She hires her former boss despite his demand for a steep salary. This upsets Nathan since the move could risk their family’s finances.

Après faces trouble when a minor consumes their drink. Kate invites a journalist to the Après factory to help repair the image. However, she is forced to take Charlie along. Charlie gets lost in the factory. Luckily, Kate manages to find him on time at the snack counter.

Anne: Anne thinks of a new way to parent Alice: of being a tough parent. She makes Alice sign up for multiple activities so that she stays busy, including an internship at Kate’s firm. Thinking that her new parenting method is working, Anne signs a book deal where she writes about her approach. However, after Anne’s debacle at Kate’s firm, she is forced to rethink her parenting strategy. Lionel loses his job, putting the family in a tough spot.

Alice’s classmates start slut-shaming her. Alice and Kate teach her to confidently reply back. Anne starts to get jealous of Kate’s new friend and changes her appearance to a more gothic one because of that. Anne decides to write a new book since her old parenting strategy clearly does not work, despite having taken an advance. Lionel gets a job, but the family will have to move to another city.

Frankie: Frankie tries to help Bianca by finding and inviting her (Bianca’s) ugly baby’s sperm donor (Bianca wants to know if her baby will grow up to look less unattractive). However, Bianca starts to trust the sperm donor too much, despite Bianca’s warning. The sperm donor ends up stealing money from the college fund of Bianca’s baby. Frankie manages to catch him. Bianca asks Frankie to be her baby’s adoptive co-parent/second mother. Frankie agrees.

Jenny: Jenny starts to engage in playful banter with Malcolm, a man who brings his kid to the park at the same time that Jenny brings her child. At work, Jenny finds out that the females are getting paid lesser than the men. She tells her co-workers about that, and they demand equal pay. It turns out that Malcolm works in the same firm and is in charge of diffusing the situation. Jenny manages to win the battle and get daycare for the women, as a start. Then, both of them agree to go on a date.

The fourth season of ‘Workin’ Moms’ proves to be another hilarious installment for the comedy series. There are genuine laugh-out-loud moments in every episode, without any dry spell. A few viewers, however, may argue that the show still does not revert back to its glory days, that is, the first and the second season. That is correct.

That being said, the comedy does not seem to suffer. The actors do not disappoint, and coupled with some witty writing (when it comes to humor), the season provides multiple rib-tickling moments. Dani Kind’s portrayal of no-shit-taking Anne leads the bunch once again. Reitman continues to depict her character’s awkward misadventures with unmatched command. Jessalyn Wanlim and Juno Rinaldi essay their characters with as much conviction as the previous seasons.

Moving on, the plot could have been thicker. At times, the story does feel slightly diluted. For instance, the sub-plot revolving around Alice being slut-shamed could have been more fleshed out. It has a somewhat abrupt ending, and the attempted resolution does not feel as satisfying. However, the final episode of the season does leave out room for Alice’s story to spill over in the next season. In a nutshell, the fourth season of ‘Workin’ Moms’ is not flawless but will continue to make viewers laugh.

Read More: Is Workin’ Moms Based on a True Story?