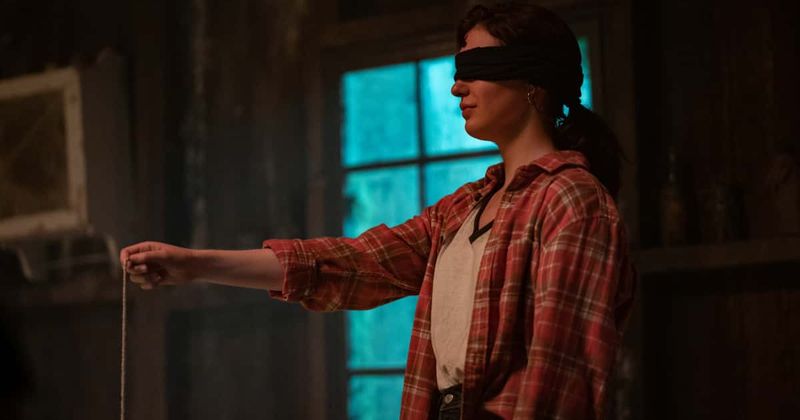 At the halfway mark of its first season, the plot thickens in ‘Yellowjackets.’ In episode 5, titled ‘Blood Hive,’ Misty’s (Christina Ricci as adult and Sammi Hanratty teen) apparent interest in Coach Scott takes a bizarre and dangerous turn in 1996. As her medication has run out, Lottie’s (Courtney Eaton) schizophrenia worsens. All the girls except Shauna (Melanie Lynskey as adult and Sophie Nélisse as teenager) get their periods together. Jackie (Ella Purnell) keeps struggling in her circumstances. Her new plan to uplift her team’s spirit by holding a séance turns into a disaster.

In 2021, Taissa (Tawny Cypress as adult and Jasmin Savoy Brown as teenager) makes important decisions regarding her campaign, and Nat (Juliette Lewis as adult and Sophie Thatcher as teenager) and Misty find out that there was someone else besides them in the barn where Travis died. Here is everything you need to know about the ending of ‘Yellowjackets’ episode 5. SPOILERS AHEAD.

In 1996, Shauna discovers that all the girls’ periods have synced except hers, and her guilt of betraying Jackie comes rushing back. She tries to hide the truth by showing a cloth soaked with deer blood, but Taissa notices. While the rest of the girls continue to work, Jackie struggles. Shauna confronts her friend and tells her the truth, helping her regain some pre-plane crash confidence.

When the girls start to speculate whether there is a ghost in the cabin, Jackie convinces others to hold a séance. However, Taissa and Laura decide not to attend. The former does so because she finds the entire thing childish, while the devout Christian Laura Lee chooses to stay downstairs for religious reasons.

Meanwhile, Misty poisons Coach Scott. While it isn’t enough to be fatal, it makes him realize the danger he is in. He tries to curtail her behavior by telling her that he reciprocates how she feels but can’t act on them because she is a minor and he is a teacher. Travis and Misty share a kiss, and it is revealed that Taissa and Van are in a secret relationship.

At first, the séance does give the girls some moments of levity before odd things start to happen and Lottie’s behavior suddenly becomes erratic. When Coach Scott throws up, Laura Lee thinks it’s a sign, goes up in the attic, and throws the Bible at Lottie, bringing her out of her trance.

In 2021, Callie finds out that her mother has been unfaithful. When she tries to blackmail Shauna, the latter makes it clear to her that it will be mutually assured destruction if she decides to do that. Misty and Nat discover that someone placed candles underneath Travis in the barn to form the shape of the mysterious symbol. Taissa thinks that her son Sammy wrote the word “Spill” with blood-red color on her door. However, when she asks him about it, he claims that the woman he says is watching him wrote it instead. Although Taissa briefly considers quitting politics before going in front of the press and blaming her opponent for the vandalism.

Yellowjackets Episode 5 Ending: Who Is Blackmailing Taissa and Nat?

After finding out that someone else was at the site where Travis supposedly committed suicide, Nat calls Taissa. The latter seems to be as surprised as Nat and Misty. As they discuss the recent developments, they both get a message on their phones, demanding $50,000 in cash and telling them not to contact any one of their friends. However, Taissa and Nat immediately decide to call Shauna. Unbeknownst to neither of them, Misty has placed a secret camera in Nat’s motel room and has watched and heard every bit of their conversation.

The person that asks for the ransom is most likely the one who sent the postcard. In this episode, we pretty much get a confirmation that Jackie died during those 19 months, so she isn’t one of the survivors who have gone off the grid, nor is she the one sending the postcards. In episode 6, Shauna gives Jackie her necklace with the heart-shaped pendent back in 1996 and speaks to her daughter about the girl that was her best friend in 2021. There is still a possibility that one of the survivors sent these postcards, including one of the protagonists.

Misty is always a suspect. And it is increasingly becoming clear that she likes to incite violence and chaos and gleefully watch afterward as it unfolds. We shouldn’t put it past her to send the postcards and the messages just for her amusement and then claim that she got one herself to divert the attention.

Is Shauna Pregnant? Who Is the Father?

Yes, Shauna is pregnant, and the father is most likely Jeff. They had been together a few times before she left for Seattle. As she misses her period, no one except Taissa notices and tells her what she perhaps already knows: If they are stuck in the Ontario wilderness long enough, others will find out. For Shauna, this means Jackie, who is bound to discover who is the father.