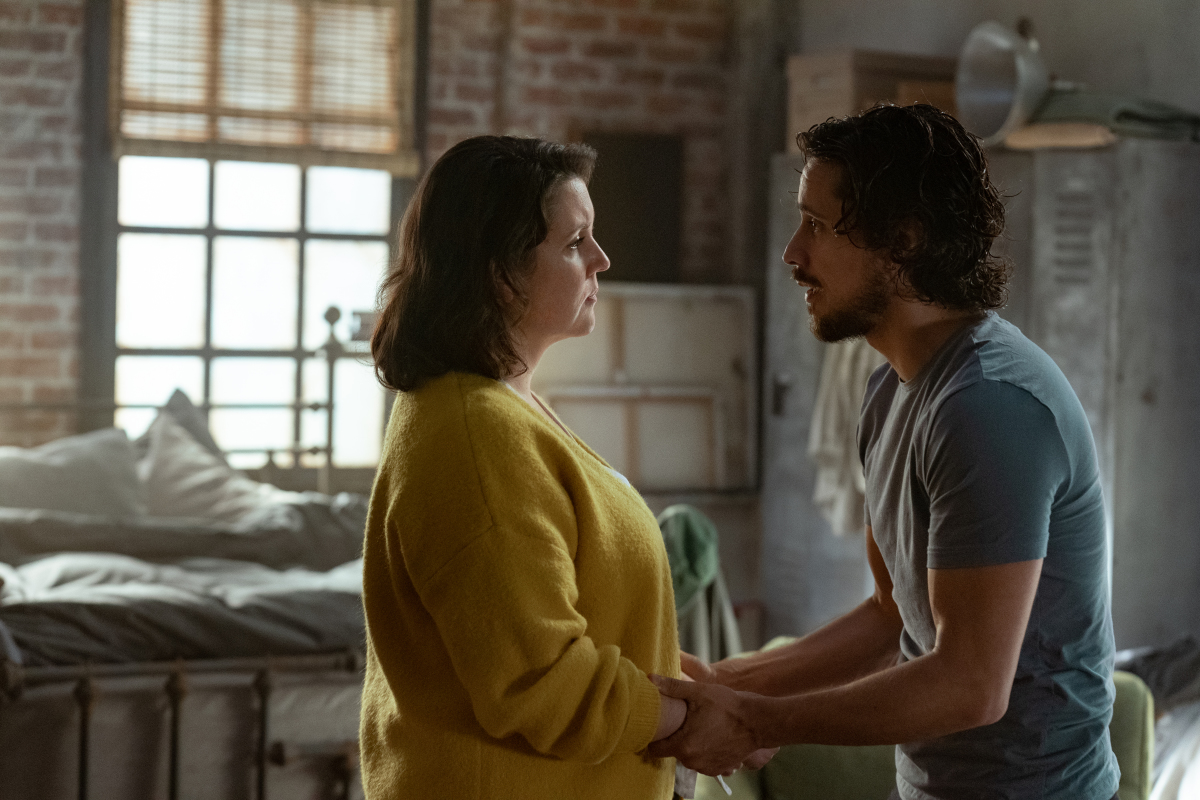 In its eighth episode, titled ‘Flight of the Bumblebee,’ Van (Liv Hewson) is revealed to be alive in 1996. Things become complicated between Travis (Kevin Alves) and Nat (Juliette Lewis as the adult and Sophie Thatcher as the teenager) after the former finds out from Jackie that Nat had been sleeping with Bobby Farleigh. Laura Lee (Jane Widdop) decides to take the dead man’s plane and reach civilization. In 2021, Callie discovers that Adam has been to their home and confronts her mother.

At the start of the episode, Taissa, Misty, and the others build a pyre for Van in 1996, but just when they have set fire to it, she wakes up, still very much alive. Later, the other girls go back to the cabin to let their friends know what has happened, while Taissa stays with Van. Van is eventually brought into the cabin, and her wounds are sewn shut.

After the accident during Nat and Travis’ moment of intimacy, the former speaks to Coach Scott about it. It is revealed that Scott is gay, and Nat has figured it out. Scott advises Nat to be patient with Travis as the boy is clearly head over heels in love with her. Meanwhile, Jackie sports an eerily calm demeanor after finding out that her best friend is having her boyfriend’s baby. She inadvertently ends up causing another fight between Travis and Nat when she tells the former about Bobby Farleigh.

In 2021, Callie tells her mother to be careful after looking Adam up on the internet and not finding anything. The seeds of doubt are planted firmly within Shauna’s mind after she discovers that Adam didn’t attend the art school he says he did. She visits his apartment to confront him. And he does offer an explanation, claiming he lied because he wanted to impress Shauna. It is once more implied in this episode that Adam is Travis’ younger brother Javi.

Yes, Laura Lee is dead. Immediately after she takes off on the dead man’s plane in 1996, it explodes over the lake, killing her. As Van has survived the mauling, Laura Lee is the first to die after the plane crash. There is a brief flashback scene earlier in the episode, in which Laura lee jumps into a pool but hits her head at the bottom. The lifeguard there saves her life but tells her that it’s God that brought her back.

It is indicated that this incident gave her a sense of purpose. It manifests fully after she and her friends get stranded in the Ontario wilderness. When Taissa and the others come back after the attack of the wolf pack, she thinks it is her destiny to save her friends. However, as it turns out, her real destiny is something much more tragic. During her baptism, Lottie saw Laura Lee with a burned face. That much has come true, once more establishing that she has some supernatural ability.

Who Is the Blackmailer?

In episode 7, as Taissa and Nat chase the kidnapper, the latter gets covered in glitter. Shauna finds a few specks of glitter inside her closet, where she hid Adam after Jeff came back. She also sees the contents of her locker are missing. She again travels to Adam’s apartment to confront him. As he opens the door and she asks who he is, the scene shifts back to 1996, and Javi comes into focus. The implication here is that Adam is Javi, and he is the one who has sent the postcards and demanded money from the other survivors.

While this can be true, it’s equally possible that Jeff is the blackmailer. He wasn’t at home when the encounter between the blackmailer and the three women happened. Moreover, he too uses the closet, so the glitter can very much come from him. In this episode, Jeff gets Shauna a new dress for an upcoming reunion. The two of them are constantly speaking about the financial issues that the family is facing. For him to just buy what seems like a pricy dress is quite odd. It’s probably his guilty conscience that seeks to compensate for his infidelity.

This episode recognizes that Taissa has sleepwalking issues stemming from her trauma. She apparently started having the episodes shortly after she and the others crashed in the Ontario wilderness. In 1996, she is supposed to keep watch. But she falls asleep, takes the deer bone totem from Van, and climbs a tree. She later tells Shauna the truth and blames herself for what happened to Van.

In 2021, she visits Shauna. It appears that Jeff has no idea that the women kept in touch over the years. When they are alone, Taissa tells Shauna that she has started sleepwalking again. Shauna lets Taissa stay at her home. Shauna sleeps in the same bed as Taissa to help her deal with her fears. The following morning, after going back home, Taissa tells her wife about the sleepwalking and convinces her to take their son and stay away from her for the time being.