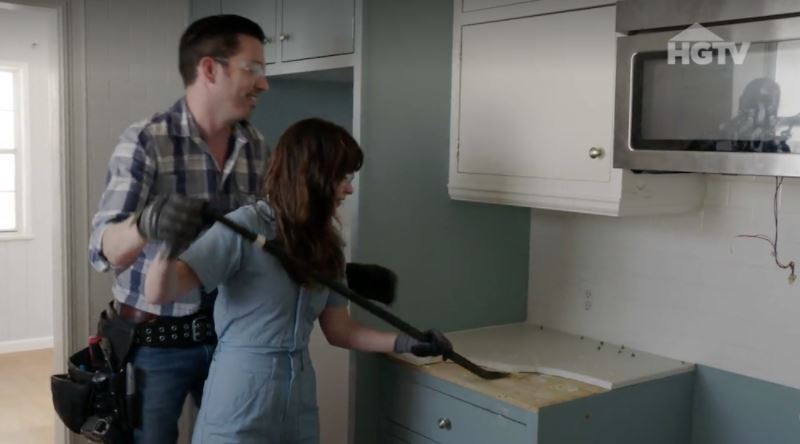 HGTV’s ‘Celebrity IOU’ is a heartwarming and feel-good show that follows Property Brothers Drew and Jonathan Scott as they help Hollywood A-list celebrities surprise their loved ones with special home renovation projects. In particular, those loved ones who have had a major impact on their lives, whether it be personal or professional. Each hour-long episode not only gives us a glimpse into a celeb’s private life, but it also provides us with the opportunity to judge their home skills and design preferences. And as season 2 commences with Zooey Deschanel surprising her best friends, things get even more tender.

As per the official synopsis given to this particular episode, “Actress Zooey Deschanel joins Jonathan and Drew Scott to surprise her best friend, Sarah, with a life-changing renovation. The family feels cramped after the arrival of their second baby, so Zooey and the Brothers give them a functional open-concept.” And as seen in the sneak peek of the episode, for the person who has stuck by her through thick and thin, Zooey does not mind getting into the nooks and crannies to genuinely help the brothers throughout the whole process. “I was impressed at Zooey, like she got in there and she was helping,” Jonathan said. Then Drew chimed in, saying, “Sarah means so much to her that she’s willing to get her hands dirty.”

In a statement to HGTV, Zooey revealed that she and Sarah met “before the first day of Kindergarten because we were going to be in a carpool together. From day one, everything Sarah did I thought was just the best.” She continued, “Sarah is one of those people who I will always be there for because she’s like my sister and she has always been there for me too…It’s so nice to have somebody that you can mutually lean upon and be there for–always. She really means a lot to me.” The actress further added that Sarah, a mother of two who is also currently studying to be a therapist, deserves this renovation more than anyone else, explaining that, for her, this is a gift to someone who has dedicated her entire life to helping others.

Zooey and Johnathan’s Romance is Highlighted 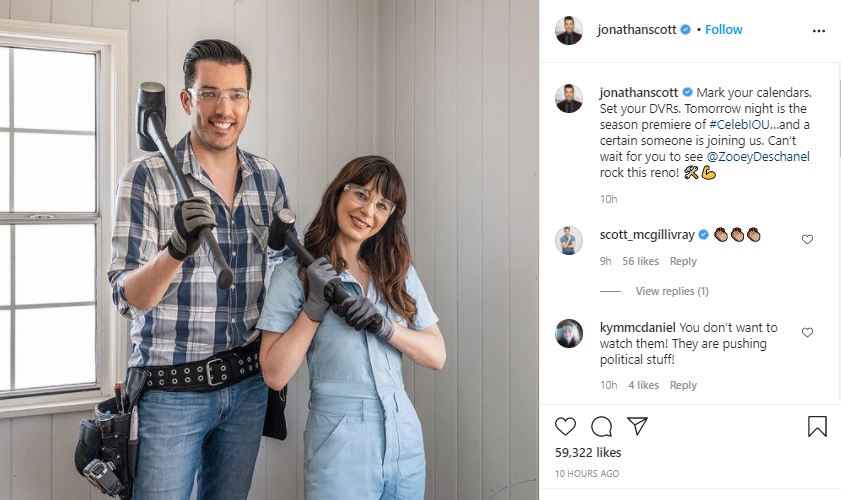 Zooey and Johnathan met last summer while filming an episode of ‘Carpool Karaoke: The Series’ alongside her sister Emily Deschanel and his brother, Drew Scott, and soon, we could all see the sparks fly. The couple kept their relationship on the down-low for a while because Zooey hadn’t officially announced her separation from her then-husband, Jacob Pechenik. But when it was done, the new couple confirmed their romance by being spotted holding hands in public. As seen in the clip above, Zooey expresses not only her excitement to get started on turning Sarah’s 900-square-foot home into something new, but she also mentions how special it is to do it while spending time with her boyfriend.

We see Zooey and Jonathan as they work together to try and remove a piece of countertop in the kitchen, but, of course, it does not go as planned. As Zooey struggles with a crowbar, Jonathan comes in from behind and guides her, and together, they remove the slab. “That’s the most romantic thing you and I have ever done,” Jonathan jokingly says after. Zooey, on the other hand, hating the noise, looks at her boyfriend, smiles, and says, “I’ll paint, I’ll do detail paint all day long. I’m happy to do like the little corners.” Then, she tells the camera, “I love spending time with Jonathan more than anything in the world. He’s the best, but I would rather watch him do it from afar, like with headphones on.”