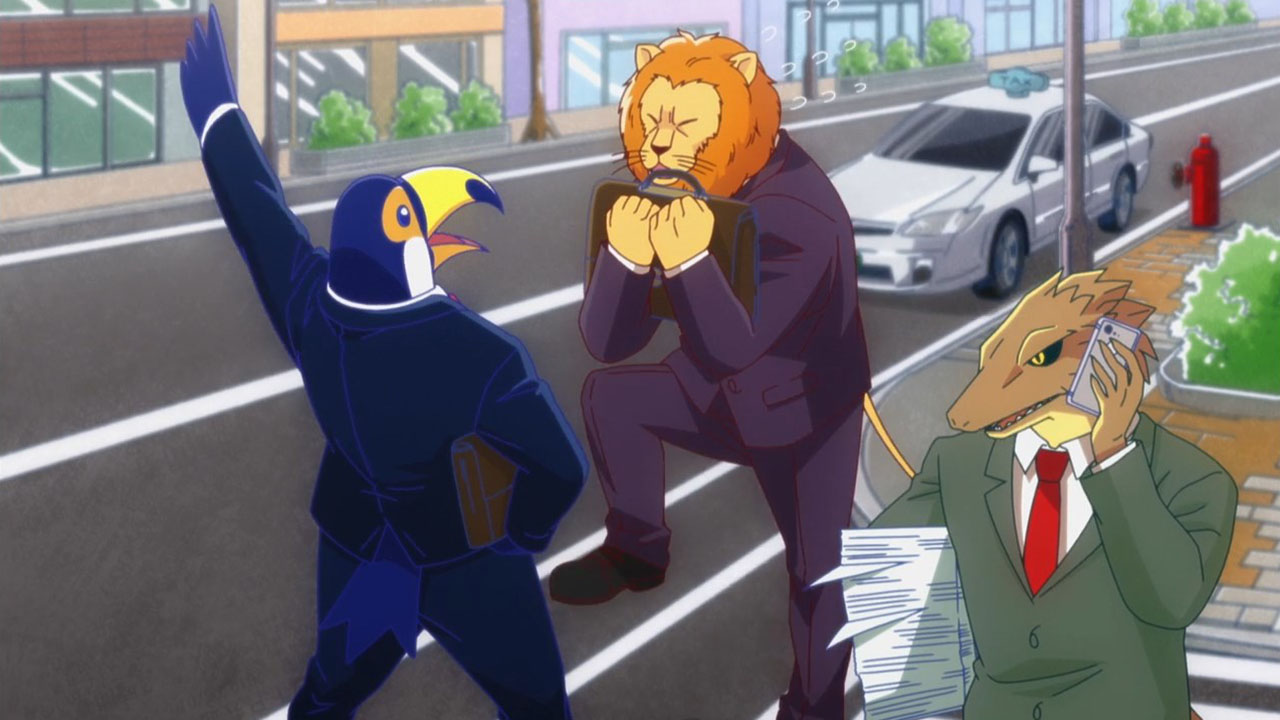 In the past, quite a few anime shows have featured anthropomorphic animals to present weird workplace comedies and ‘Africa no Salaryman’ is certainly one of the best amongst them. While its excessive use of CGI might bother a few, the ones who can ignore that will have a good time watching its absurd comedy that heavily relies on social criticism and goofy animal jokes. However, I would not say that it’s suitable for everyone as it mostly makes references to the Japanese work culture.

So if you’re looking for a comedy anime that is very different from most shows out there, you might want to give this one a try. But even if you don’t watch it, you won’t really be missing out on much.

Africa No Salaryman Season 2 Release Date: When will it premiere?

Africa No Salaryman Season 1 premiered on October 7, 2019 and with a total of 12 episodes, it ended on December 23, 2019. Pretty much like ‘Aggretsuko‘, ‘Africa No Salaryman’ is one of those weird anime shows that feature animal-like human characters. For the most part, ‘Africa no Salaryman’ is a comedy that revolves around African office workers who work as “slaves” in the Japanese corporate world.

In the year 2017, Production I.G had produced an alternate version of this anime which was not so well received by most viewers. But, so far, this new season has been doing fairly better than its previous version. ‘Africa no Salaryman’ has been adapted from a short web manga, which again, was not extremely popular but was very well received by those who read it. To an extent, the first season of ‘Africa no Salaryman’ does manage to capture the essence of its source. But because of its lack of popularity, it is a little less likely that it will return with another season. As of now, we’re quite uncertain about its future but if it is being considered for a sequel already, we can expect Africa No Salaryman Season 2 to release sometime in 2021.

An English Dub of ‘Africa no Salaryman’ is not available yet, but you can stream it on Wakanim with its original Japanese audio and English subtitles.

Lion, Toucan, and Lizard are three distressed animal-like humans who struggle to adapt to the Japanese work culture. After spending almost all of their lives in some major African companies, they find it hard to keep up with the rigorous Japanese corporate environment and feel like slaves. They often rant about how stressful their work has become and it’s their eccentric personalities that add a tinge of comedy to these rants. Drowning in projects that don’t make sense to them and facing the drastic impacts of frequent pay cuts, life is not so easy for these poor animals. With the Savvana and their good old food chain behind them, they are now mere employees who work all day for nothing.

Lion—often referred to as the Lion Senpai by his co-workers—was once the king of the jungle. But now he is nothing but the middle manager of his company. At first, when Lizard and Toucan met him, they were really intimidated by his appearance.  But they later realize that he’s quite harmless and has a very gentle personality. Lion turns out to be the perfect boss who really cares for the employees who work under him and from time to time, he also joins their rants which revolve around the skewed corporate system they work in.

Lizard is one of the most hardworking people at the office who always pays attention to what his boss has to stay and also pushes his peers to perform better. He’s a bit too serious at times and even his jokes don’t usually make a lot of sense. He’s also really smart and is nicknamed “Lizard-Kun” by her peers.

Unlike, Lizard and Lion, Toucan is not from Africa and also has a very laid back approach towards work. But with the right amount of pressure, he puts his head down and works hard. He can come off a little shallow at times but he respects the people he works under and usually does everything that is expected from him.

Sasshou Hamsters are not exactly a part of the company and though they might appear all cute and innocent, they are quite savage and even walk around with kitchen knives in their hands. They show up in all kinds of unexpected places and cause destruction.

Turtle is the president of the company where Lion and all the other animals work. He is brutally honest about everything and is solely driven by his hunger to earn more money. In appearance, he seems quite innocent but he openly calls his employees “corporate slaves” and even announces pay cuts without any warning. He is a cruel boss and all of his employees despise him.