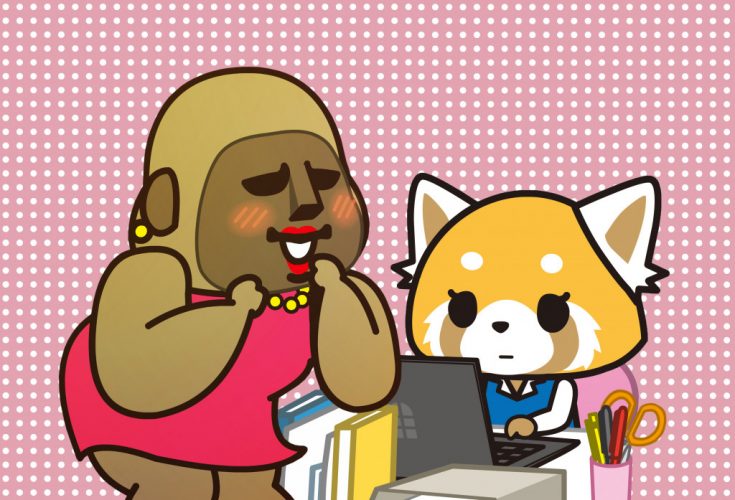 To an outsider, ‘Aggretsuko‘ can come off as an extremely childish show with animal characters that remind you off “Hello Kitty”. But it actually revolves around the real struggles of being a 20-something and portrays them in a rather comical manner. For the most part, ‘Aggretsuko’ can be enjoyed by all age groups but it will be more relatable for adults. It also brings in the complications that almost all relationships go through when you’re in your 20s; be it a relationship with a friend or a family member. Almost no character is portrayed in a good light and all of them have flaws of their own, including the heavy metal loving protagonist Retsuko.

The most appealing aspect of the entire series is how relatable the struggles of the protagonist are and how most of it is actually experienced by many working-class women. Apart from that, Retsuko also has a really toxic relationship with her boss which reflects the gender powered dynamics at her workplace. And then, there is this third layer of the story that will be relatable for pretty much everyone as it focuses on how the main character struggles to find her life’s true purpose. Season 1 of the anime does not really provide any solutions to these problems but definitely gives a medium for catharsis. The second season takes Retsuko on a whole journey of self-development that will probably have a lot more than a lesson or two for most viewers.

Mostly, season 2 is all about asking yourself a question that you’ve probably asked many times before – “What am I really doing with my life?” While the first season pretty much did the same, its prime focus was more on the corporate lifestyle. But in the case of Season 2, it is more about directly addressing all general life issues that most of us face at some point in time. Though, again, the anime does not really answer the question any more than what the first season managed to do.

This season also introduces the importance of marriage and how Retsuko understands it from many different perspectives. The first out of these being her own her mother’s, who almost screams that she wants grandchildren as she is almost entering the “third age”. Then comes Mrs. Kaba who sets more of an example of how a family-driven wife devotes all of her energy into the welfare of her family. The third one involves Washimi, who is a divorced woman questioning the idea of love in a marriage and how there is always a possibility that it will fade away. Then we also have Gori, who is a woman in her 40s and is still trying to find her soulmate.

And finally, we have Supervisor Ton, who uses his family as an excuse to blame his “tedious” life. All of these ideas together add up and form an image in the mind of the protagonist who struggles to find a balance between these contrasting notions. The second season takes a more sentimental approach as compared to the radical outlook of the first one and shines much brighter in a lot of ways.

The second season of ‘Aggretsuko’ premiered on June 14, 2010. Since it’s an ONA, all 10 episodes of the season were released on the same day itself and not over a span of weeks. This Fanworks anime is an original and has not been adapted from a manga or light novel. To know more about its future, you can refer to our preview article on Aggretsuko Season 3.

‘Aggretsuko’, also known as ‘Aggressive Retsuko’, follows the life of a 25-year-old metalhead panda who works in the accounting department of a Japanese trading company. Tired of her tedious work life, where she is constantly pressurized by her peers and her seniors at the office, she goes to a local bar every night, to let out all of her emotions by screaming out death metal karaoke solos. Mashimi and Gori are two of her seniors at work who try to act as her supports systems but often fail to give her any advice that is viable and thus, she sticks to her daily dose of metal karaoke.

As simple as the plot may seem, the message behind all of it is rather deep and emphasizes on the day to day frustrations of a female adult, especially in the corporate world. With a boss who is literally a pig and peers who use a manipulative approach to climb the corporate ladder, Retsuko’s character is quite relatable for many working women who have faced sexism and controlling demands of others during their 20s. Even the whole idea of Retsuko turning into a guttural screaming beast every night suggests that like most women in real life, she has a tough time expressing how she truly feels and chooses to go for an external source for channeling her inner rage.

Over the years, Netflix has come up with some really eclectic animated shows and out of all of them, this one indeed hits home and adds another feather to the hat. Considering the popularity that this one has managed to gain, Retsuko is bound to be the next favorite Sanrio character after “Hello Kitty”.

Now, let’s talk about the story of the show. I believe I have already made it pretty clear how deep and engaging the story-line is. The sole reason why ‘Aggretsuko’ has been able to do so well is because of its sense of realism and also, its use of extremely grounded comedy. The whole pacing and atmosphere of the story is rather unusual and makes you feel like you’re actually rooting for a friend who is going through the same struggles as you. And though the story is mostly relatable for working women only, even as a male you will find certain aspects of the story quite relatable, especially the ones that are directed towards finding one’s purpose in life.

Coming to the characters, they are basically anthropomorphized animals who also have some sort of metaphorical symbolism to the animal they represent. A great example of this is Retsuko’s torturous boss who is actually a pig; and then you’ve got Haida who represents a typical male in a corporate office. Though these characters may not at all be anything like humans, they are actually more fleshed out, realized and relatable than any other human character you might have seen in other anime. The cast is fun, genuine and in the end, seals the deal on making this an ageless wonder that can be enjoyed by every member of a family.

The animation is done by Fanworks Studio and has been portrayed in a more cartoonish and childish sort of way which actually contrasts the whole theme of the anime. But that is probably the whole point of it as the story of the anime itself tries to juxtapose a calm atmosphere with some heated intense ones. There are a few tweaks in the art style that can be quite evident from time to time. But the iconic art style and concept designs really make up for the flaws. A lot of people might even think of leaving the show initially because the animation style can wear off on you, but once you get used to it and understand its deeper implications, this element also becomes very enjoyable.

The background scores are quite catchy, especially the ones that are played when the employees are working in the office. The best part about this department is the death metal scores that hardly last for 10 seconds but are very impactful. The protagonist appears to be really cute even when she is screaming her throat out and at the same time, her state of mind is also reflected very well through her raging voice and mannerism. Also, the fact that the English Dub of the show is a real treat just extends the whole fun element of it.

Overall, ‘Aggretsuko’ is nothing but a surprising reassurance for everyone that life can be hard sometimes and one has to find ways to make it better through relationships and personal development. The best part about the anime is that it does so by not literally spelling out each and everything that it tries to preach. So if you are somewhere in your 20s and you’re just trying to make sense out of your life or you’re starting to feel really pressurized in your life, this is the perfect show for you. You will be surprised to see how the entire series is full of vigor and deep life lessons.

From the trailer itself, you can tell how impressive the English Dub of ‘Aggretsuko’ is. Season 1, Season 2 and even the Christmas Special episodes can all be streamed in English on Netflix.