Are Alexis and Hunter From The Ultimatum Still Together? 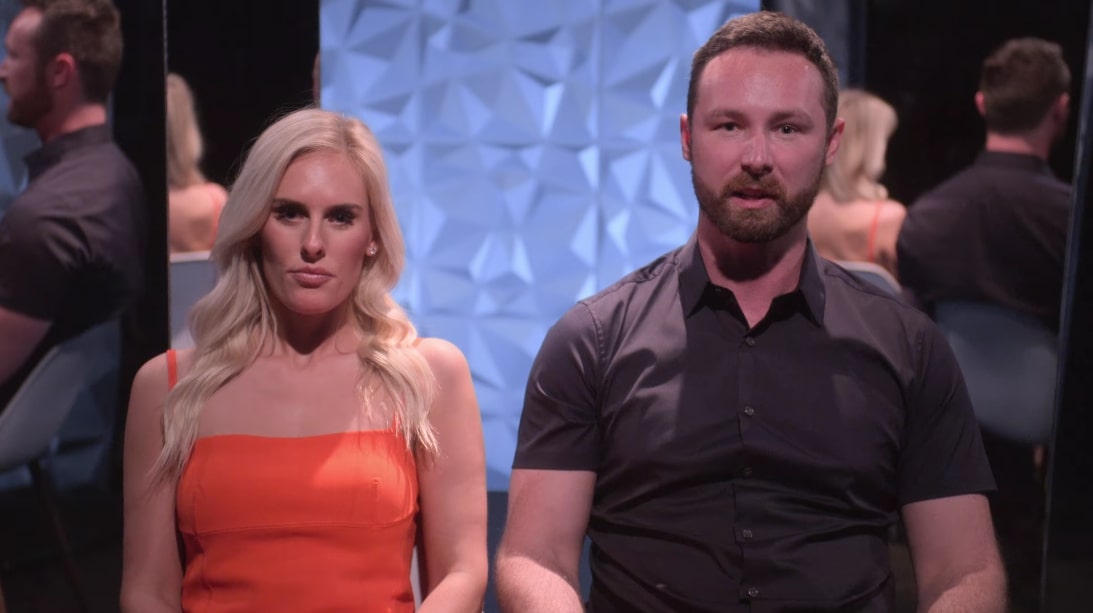 Coming from the creators of ‘Love is Blind,’ ‘The Ultimatum: Marry or Move On‘ can only be described as a dating reality series that goes way beyond the norm when it comes to the concept of forever. After all, it revolves around those couples who’re essentially at a standstill as one of them is ready for marriage while the other is not, leading them to partake in an experiment that tests their love. Among the couples of season 1 were Alexis Maloney and Hunter Parr, who actually managed to do quite well for themselves in the end. So, here’s everything we know about their journey on the show and their current relationship status!

Alexis and Hunter’s The Ultimatum: Marry or Move On Journey

Alexis Maloney had given Hunter Parr the ultimatum since she wanted to take the next major step in the relationship, whereas he just wished to move in together first. Despite this bump, they always seemed compatible. Hunter’s calm demeanor (as also highlighted during his exchanges with April Marie) perfectly balanced out Alexis’ fiery and honest personality, which they both genuinely valued. That’s why Alexis didn’t mind admitting that she knew he was the one for her, saying, “when we went on our first trip; he was so patient, just let me run the show,” to which Hunter implied even he wanted only her. 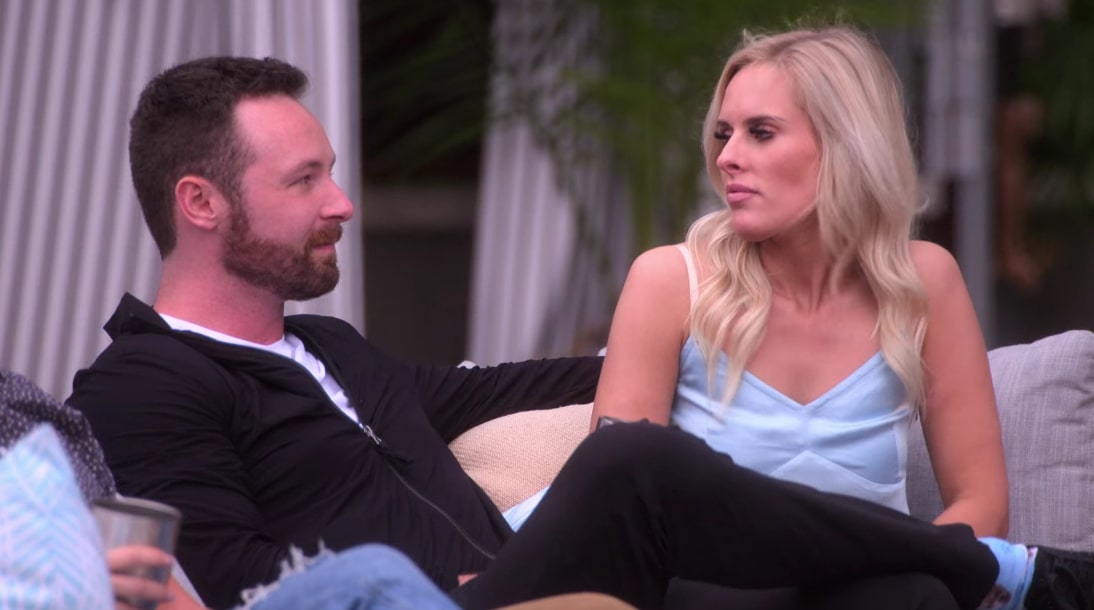 Having been together for two years, the then 25-year-old had told her boyfriend, “We either get engaged, or we break up,” as she believed that if he did have the right intentions, he would quickly put a ring on her finger. Thus, Alexis’ goal for coming into this experiment was to give Hunter (and herself) an opportunity to meet new people who might be able to help them reach where they need to be for one another. However, from their initial conversations during their new dates, it appeared as if there was one more factor holding the couple back — financial stability.

While the 28-year-old did say that he was looking to establish himself a bit more before settling down, his original partner conceded that marriage was both a financial and an emotional decision for her. “If Hunter wasn’t making enough money… I would walk away,” Alexis candidly stated, later explaining that she didn’t just want comfortable; she wanted “good.” With this, she briefly wondered whether or not he was the right man for her, yet it dissolved as soon as she realized that no other possible connection fulfilled her in the way Hunter did, and thankfully, he felt the same.

Are Alexis and Hunter Still Together?

Right after the first stage of ‘The Ultimatum’ process, Alexis Maloney and Hunter Parr actually walked away engaged — he was April Marie’s choice, but by that time, he knew in his heart that Alexis was his entire life. Therefore, when asked to reveal his pick, Hunter merely said he wanted to marry the person he entered the production with and ran to her to get down on one knee. 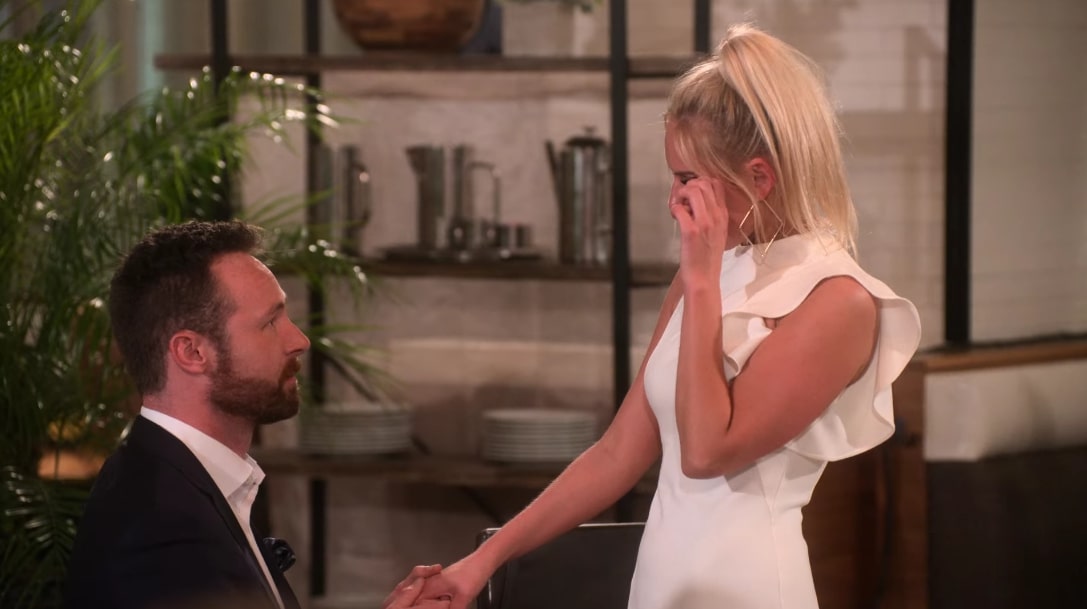 “I was just scared,” Hunter said while proposing, in part, “and I was using moving in together as a way to delay what I knew inside, and I’m not scared anymore… I love you for who you are, all the good and the bad, and I don’t want to be with any other girl… Alexis, will you marry me?” Of course, she said, “Yes!” Hence, we’re glad to report that the loved-up couple is, in fact, still blissfully together. 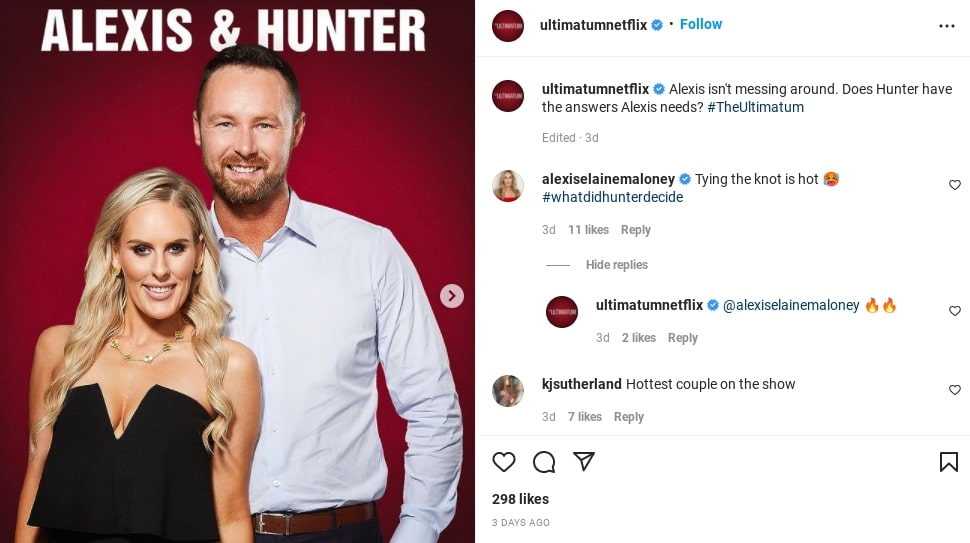 From what we can tell as of writing, Alexis and Hunter are yet to walk down the aisle, but they have set a date for it — June 18, 2022. Even their social media platforms, including the mutual follow as well as their cheeky public comments, as seen above, make their continued romance clear. We should also mention that the travel enthusiast/shop creator has since relocated to California, yet it’s unclear whether her PSA specialist fiancé has followed from Texas or not. Well, whatever the case may be, we wish the couple the best for the upcoming phase of their lives.

A post shared by Alexis Maloney : The Ultimatum (@alexiselainemaloney)

Read More: Are Nate and Lauren From The Ultimatum Still Together?