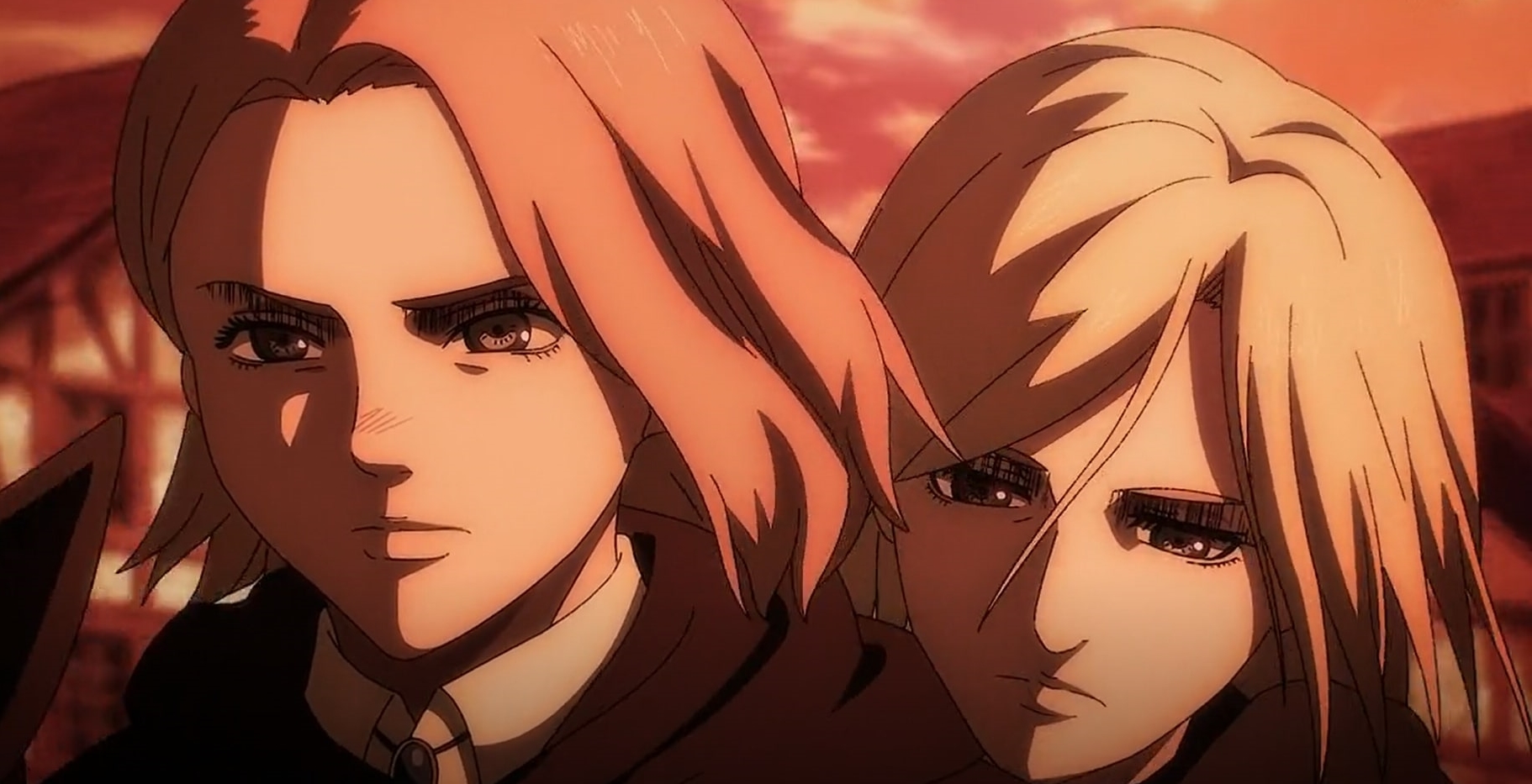 ‘Attack on Titan‘ season 4 episode 23 titled ‘Sunset’ revolves around the aftermath and the consequences of the rumbling on the Paradis Island. While a lot of Eldians have lost their lives, loved ones, and homes, the internal support for Eren is growing rapidly. Meanwhile, Annie, who has woken up from her four-year-long sleep plans to fulfill the promise that she made to her father. At the same time, Armin prepares to chase Connie and stop him from sacrificing Falco while Hange meets General Magath and Pieck. Here is everything you need to know about the ending of ‘Attack on Titan’ season 4, episode 23. SPOILERS AHEAD!!!

After the rumbling began, the Wall Titans, who march alongside Eren to face the allied forces, also end up hurting a lot of Eldians. While injured people who have lost their families and homes are understandably angry, the overwhelming majority who are unscathed rejoice in the anti-hero’s declaration of war on the rest of the world. The growing support for Eren is worrisome for the soldiers as they are afraid of an uprising. Therefore, Hitch orders some of her comrades to prepare for the worst, but while in the headquarters, she comes across suspicious footsteps that go in the basement. 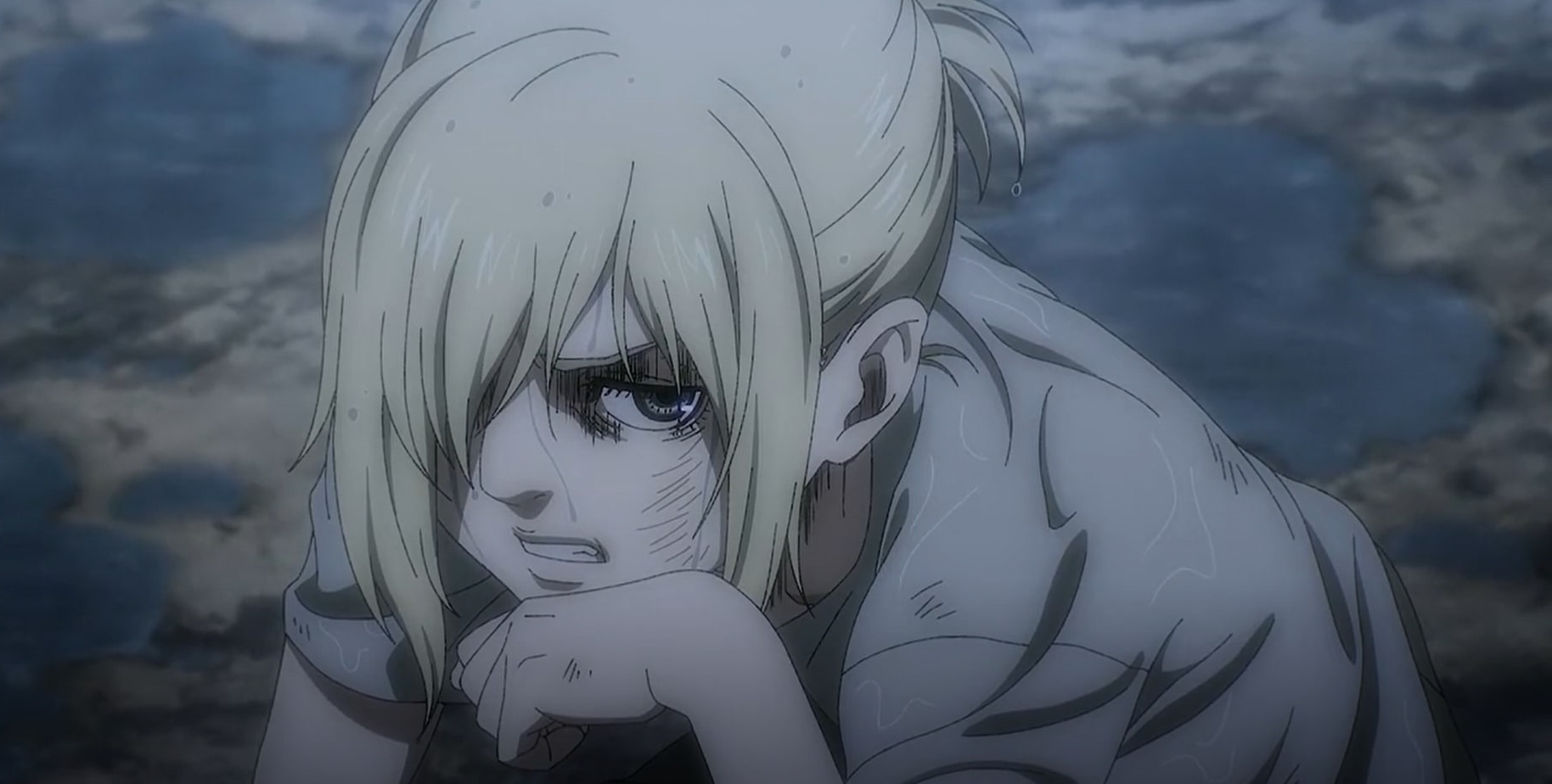 As soon as she opens the door, she is ambushed by Annie, who is lying in wait for the right moment. Unfortunately, the holder of the Female Titan has grown weaker over the years, and Hitch easily manages to slam her on the floor and tie her hands behind her back. But Annie has already prepared for such an outcome as she had cut herself so that she can transform into a Titan anytime. Hitch understands that the odds are stacked against her and helps Annie escape. While on their way, the holder of the Female Titan reveals that she was conscious throughout her captivity and knows what has happened in four years through Hitch and Armin’s regular one-sided conversations.

Hitch, who is curious about Annie’s motives and whether she felt bad about taking people’s life, finally asks her the burning question. The latter does not try to justify her sins but opens up about her painful past. Annie was born as a result of a prohibited affair between a Marleyan woman and an Eldian man. When the officials learned about it, the toddler was sent to an internment zone where she was adopted by a man named Leonhart. Unfortunately, Annie’s adoptive father wanted to live a privileged life, so he forced her to become a Warrior.

From a young age, she had to undergo rigorous training, and over time she became strong enough to beat up people muscular and taller than her. It came at a huge price as all Annie knew now was hurting others, and nothing really mattered to her. When she was selected for the mission to Paradis Island, her father, who has now understood the pain he had put Annie through, made her promise that she would return to him. Since then, all Annie has wanted is to go back to her father.

Meanwhile, Armin prepared to go after Connie and stop him from sacrificing Falco, who could be used to negotiate with Reiner and Pieck. At the same time, Floch, along with other Yaegerists, tries to take control of the situation on Paradis Island by convincing the volunteers who religiously followed and supported Zeke’s plan to join them. Pieck and General Magath, who are helplessly watching the Wall Titans march towards their country, are approached by Hange, who claims to be unarmed and willing to negotiate.

Attack on Titan Season 4 Episode 23 Ending: Why Does Floch Kill One of Zeke’s Volunteers? What Does He Plan to Do on Paradis Island?

Floch, who has been one of the most active members of the Yaegerists following Eren’s escape from prison and the consequent uprising, demands Zeke’s volunteers to give up their delusional dreams. Most of them remain silent and unresponsive, but one of the men protests and is shot through the hand by the de-facto leader of the Yaegerists. Floch assumes that his violent warning will discipline the volunteer, but when he continues to argue against Eren’s scheming, the former recruit of the Survey Corps does not hesitate in shooting him dead on the spot.

The Yaegerists leader then claims that Eren has entrusted him with his final plans from the very start. Following his escape from the prison, the holder of the Founding Titan revealed to Floch that he was going to manipulate Zeke to make use of his full powers. So, Floch had known for several months that Eren never liked Zeke’s plan of the genetic neutering of the entire Eldian population. While the anti-hero takes on the rest of the world with his gigantic Wall Titans, Floch is going to suppress any uprising on Paradis Island. 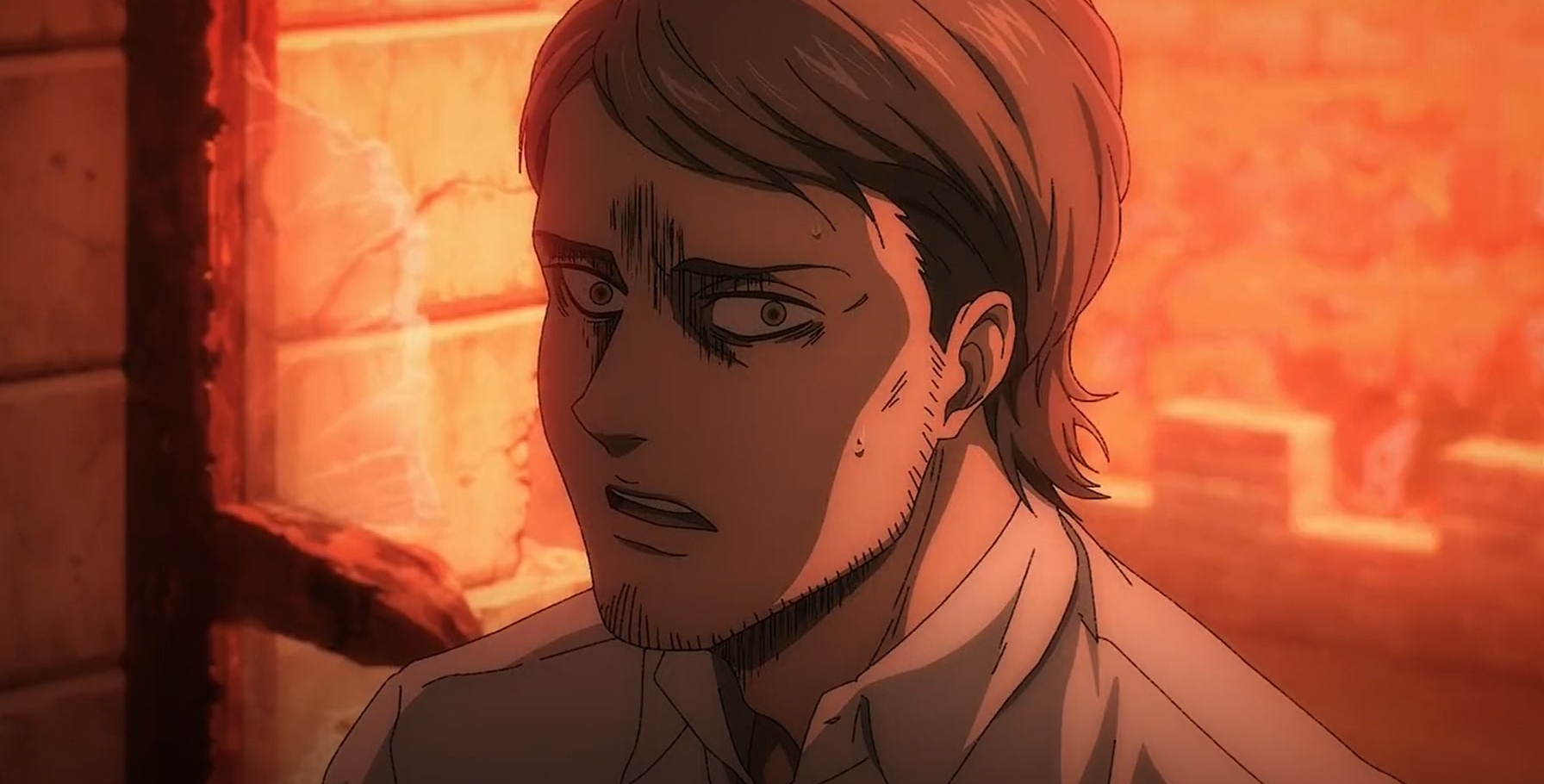 Floch has already begun to put his plan into action by killing the volunteer, but he understands that Jean, who is tired of fighting and can be a crucial ally, can be convinced by promises of a comfortable life. The de-facto leader of the Yaegerists argues that Jean no longer needs to put himself through bloodshed and war anymore since Eldians have already won. The simple persuasive argument appears to do wonders as Jean clearly seems dejected and is immediately lost in dreams of a better tomorrow. It can be called a significant win for Yaegerists, but their war on Paradis Island is far from over as Eren’s opposers have begun to regroup slowly.

Is Levi Dead or Alive?

No, Levi is not dead. The life of the captain of the Special Operations Squad has been hanging by a thread for quite some time now. Levi gets heavily injured when Zeke detonates the Thunder spear. It is a miracle that humanity’s strongest soldier somehow survives the violent blast. But after that, luck continues to favor his enemies as Zeke manages to recover from his life-threatening wounds soon afterward, thanks to Ymir. 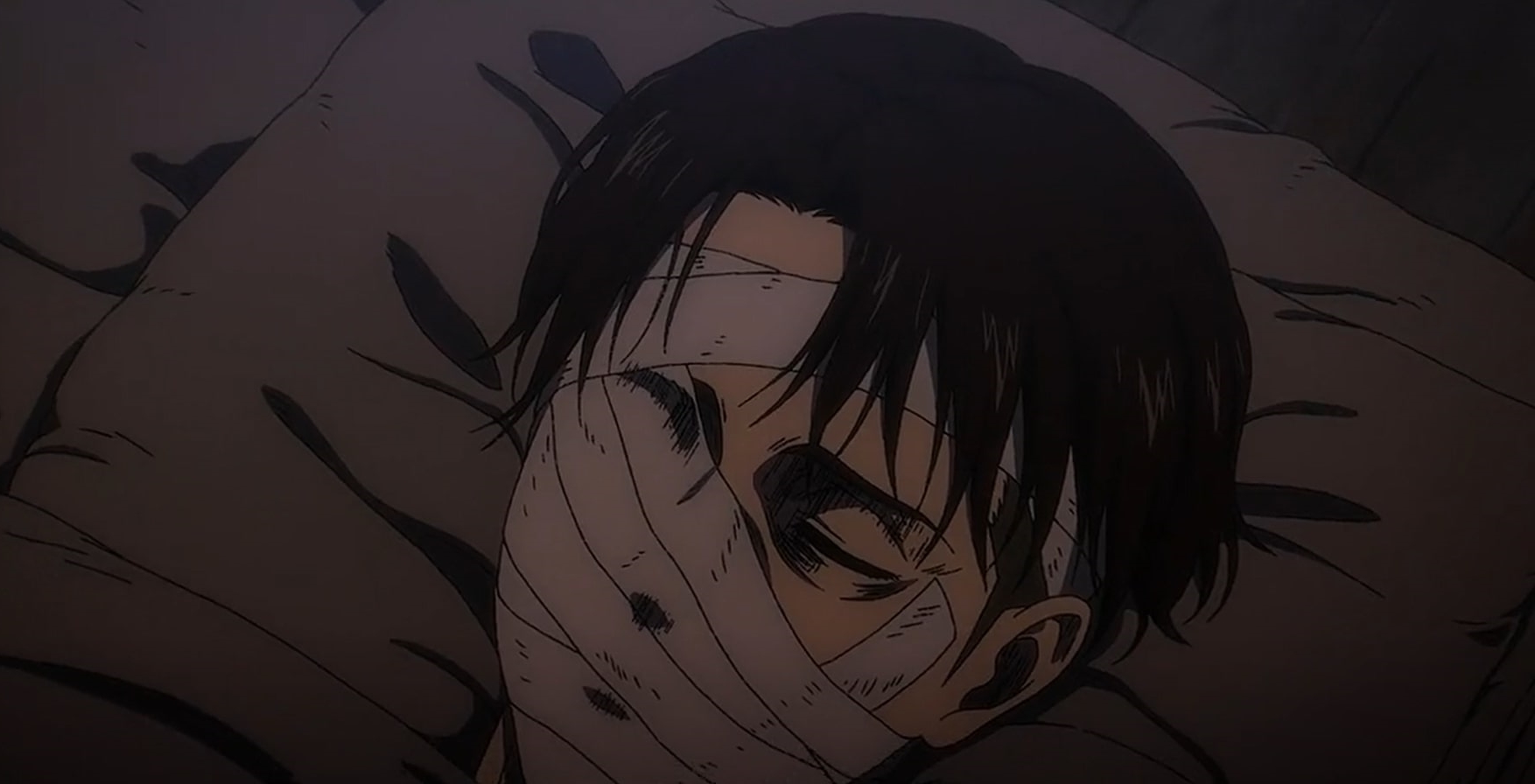 When the Yaegerists find Levi and the holder of the Beast Titan, it appears that the former is dead. Hange is smart enough to quickly jump on the small window of opportunity and claim that her friend is not alive anymore after checking his pulse. However, when the enemies do not take her word and try to confirm Levi’s death themselves, Hange jumps into the river flowing next to her with her friend.

After the rumbling has begun and General Magath, along with Pieck, watch the Wall Titans approach their country, they find Hange walking towards them. She quickly confirms that she has no weapons, and she is with a harmless friend (Levi) who has barely escaped death.