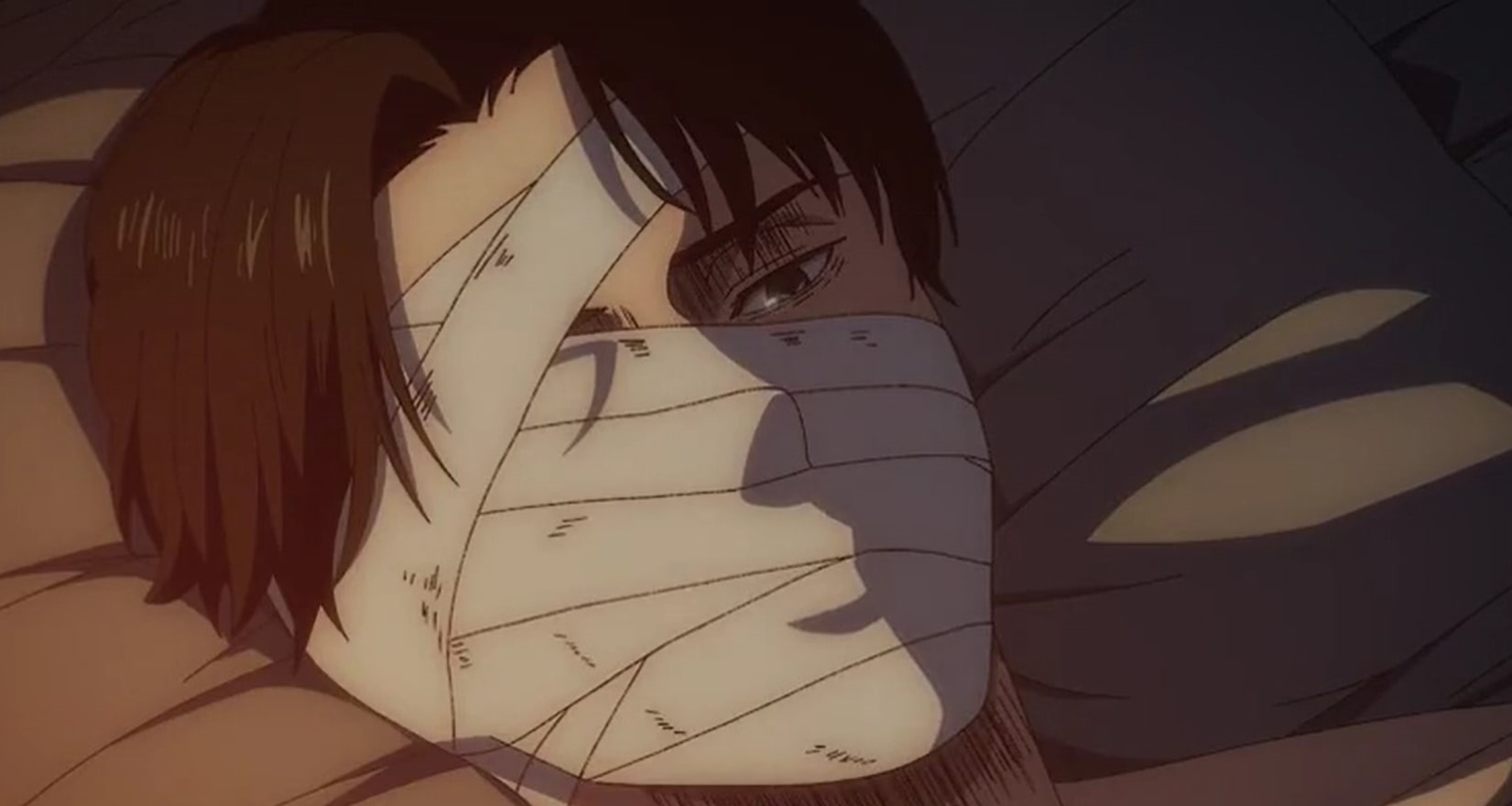 ‘Attack on Titan’ season 4 episode 24 titled ‘Pride’ focuses on the events that followed after Hange jumped with severely injured Levi in the river. Furthermore, it also follows Connie, who is taking Falco to his mother so that she can be turned into a human again after eating the present-holder of the Jaw Titan. Annie, who is traveling alongside Hitch to figure out a way to keep the promise that she made with her father, meets some old friends. Here is everything you need to know about the ending of ‘Attack on Titan’ season 4, episode 24. SPOILERS AHEAD!

Several days before Hange met General Magath and Pieck for negotiations, she jumped into the river along with Levi to protect Humanity’s strongest soldier from the Yaegerists who were prepared to kill him. She was then chased by soldiers allying with Eren and was forced to take them out. After hiding Levi’s injured body in the forest, she sat on a treetop and shot every single Yaegerist that came after her. Once she made sure that no one followed them anymore, Hange took care of Levi’s severe injuries and was surprised that his friend had somehow survived the violent blast.

In the present day, Hange tried to negotiate with General Magath and Pieck to work with them. Levi, who is still not recovered from his injuries, supported his friends’ arguments and hinted about the desire to join hands to stand up against Eren. When Magath expresses his desire to learn about Zeke’s whereabouts, Hange argues that Eren has most likely absorbed him so that he can continue to use the powers of the Founding Titan. Meanwhile, Connie is taking a rest in a forest while on his way to his village along with Falco.

He feels guilty about his decision but thinks that he does not have much choice. The following day when he reaches his village, Falco finally starts getting suspicious of Connie. The latter shows him his mother in her present state and makes the strange demand of helping him brush her teeth. As he takes Falco to the top of his destroyed house, Armin and Gabi reach the spot just at the right moment. They warn him that Connie is going to feed him to his mother. Armin, who has seen enough bloodshed so far and feels that he should not have survived in place of Erwin, decides to take matters into his own hand.

The holder of the Colossal Titan decides to sacrifice himself to turn Connie’s mother into a human being. But just as Armin is about to be devoured, Connie steps in and saves his friend. He realizes the gravity of the mistake that he was about to make and feels that her mother would have never wanted him to kill a kid, even to save her life. Gabi, Armin, Connie, and Falco then head to a nearby market to eat something, where they accidentally meet Annie, who does not think twice about joining them.

Meanwhile, Floch is about to execute Yelena and Onyankopon and lays out every rationale to justify the decision in front of the Yaegerists. When Onyankopon argues back, Jean shoots four times in the ground, after which the Cart Titan devours him. It turns out that Pieck was just saving him following an agreement with Hange, and she even managed to take Yelena and Onyankopon with her. Mikasa, Connie, Armin, who has already joined hands with Gabi, Flaco, and Annie, wake up Reiner.

Attack on Titan Season 4 Episode 24 Ending: Why Does Annie Wake Up Renier? What Does She and Her Allies Plan to Do?

After Eren acquired the Founding Titan and virtually gained godlike powers, Reiner was too overwhelmed by the loss. He had already expressed his desire to just die so that his violent life could finally come to an end many times in the past, and his inability to stop Eren and Zeke’s plan just made him even more depressed. He went into a long sleep while Gabi decided to fight back and put her life on the line. After she had managed to save Falco with Armin’s help, they also add Annie to their numbers, following which they wake up Reiner. 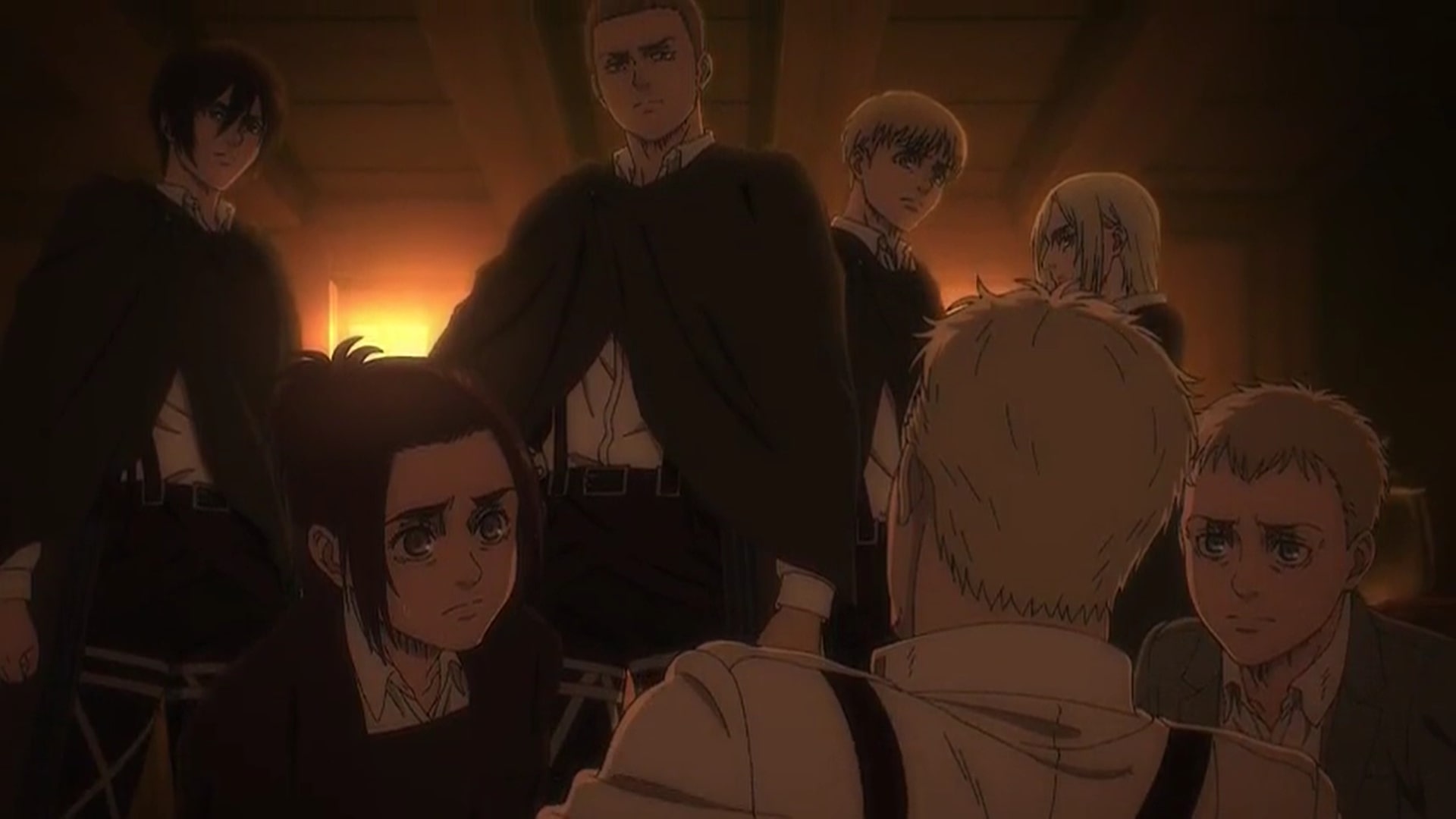 It is noteworthy that Jean shooting several times in the ground was actually a signal for the Cart Titan to take him along with Yelena and Onyankopon to Hange and General Magath. Mikasa even confirms this by telling Connie about Jean’s signal. Although viewers don’t get to see Hange and General Magath planning the entire operation with Jean, Mikasa, Connie, Annie, and Armin, it seems that they have conspired to make the mission a success.

But where does waking up Reiner come into all of this, and what is the final goal of the sudden uprising. Although it seems impossible to stop Eren, it appears that these brave soldiers have not given up hope. They wake up Reiner to strengthen their forces so that they can fight back against the Yaegerists on Paradis Island and eventually confront Eren, who is about to take the lives of every single human on the planet except the subjects of Ymir. Their mission can be encapsulated in Connie’s answers to Reiner when asked where they plan to go. He tells his former enemy that they are going “to save the world.”