The Bachelor: Listen to Your Heart Cast Details 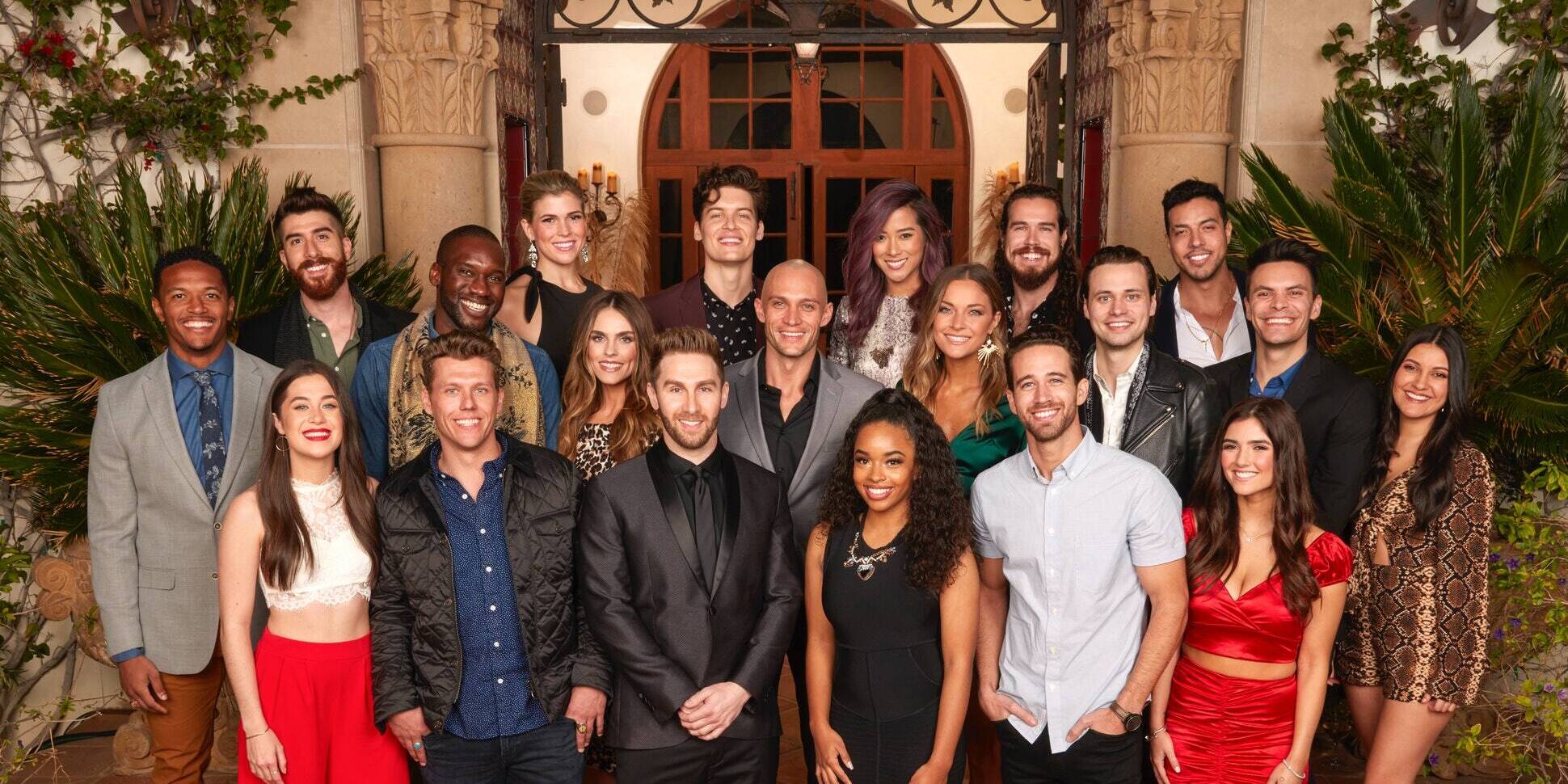 The latest addition in ‘The Bachelor’ universe, ‘The Bachelor: Listen to Your Heart’ is a dating reality series that features aspiring musicians who are looking for a connection that will last a lifetime. Once the young and single contestants enter the mansion and form a romantic partnership with someone, the couples go on music-themed dates, perform famous songs in front of the judges or a live audience. After a series of elimination, the top 2 couples compete in a musical battle, and the couple with the most chemistry and sync is declared the winner.

The Bachelor: Listen to Your Heart Cast

‘The Bachelor’ host Chris Harrison will be joining the show as the host. Let’s find out the details about the contestants (including those who enter at a later stage) and judges of the show.

A die-hard Jon Mayer fan, Mel (27) learned songwriting from Berklee College of Music. She dislikes the modern idea of love and hates dating apps. Stevie Nicks inspires her music. She can also do a mean ‘Seinfeld’ impression. Genre: Indie Rock

Bekah (25) has a BFA in musical theatre and is a proud musical theater nerd. She claims she has never been on an actual date, but her Instagram profile states otherwise. Hmm. Genre: Musical theatre

Also, Bekah once attempted crashing into Kim Kardashian’s property but was caught by the security.

Brandon (34) has been playing saxophone since he was 4. He is a former Marine who used music as a form of motivation for himself and his fellow soldiers. Brandon is still reeling from the fact that his lover moved on while he served his country. He has once opened for Jason Derulo at Times Square.Genre: American folk-pop

Multiple heartbreaks and a failed engagement have made Bri (28) stronger. She is looking for a partner who is not commitment-phobic, understands her passion, and also desires to share it with her. PS – She has a gluten allergy. Genre: Pop

Cheyenne (23) aspires to become a pop sensation. Despite living in California, Cheyenne has never been to a nightclub. She wants her man to have solid morals and ethics and a fantastic sense of humor. She feels dating someone with similar aspirations would help in developing a stronger bond. Genre: R&B

Chris (30) took up music as a profession, after his father’s demise. He is a wedding singer who desires a partner he can grow old with. It’s a bonus if she’s a singer. Genre: Soul

A self-proclaimed weirdo, Danny (26) is a YouTube sensation because of his song covers and impressions. He loves game-nights and can give you goose-bumps with his beat-boxing. He wants his woman to embrace both his goofy and serious personality. Singer-Songwriter

The multi-talented Gabe (28) is a performer, member of the Christian Ministry, and an athlete who played at Division 1 football at Rice University. He loves to motivate others but yearns for a woman who can rule his heart. His secret weapon is his cello. Genre: Soul and Folk

Jack (28) is a single father to a 3-yr-old son. Being raised in a musical family has helped him shape his career as a live performer. He desires to find the woman who can fill the void in his life with love and music. Genre: Country

A lover of margaritas, Jamie (21), has been on over 100 dates but can’t manage to find even one person who makes her heart skip a beat. Her dream is to make it big in the musical scene. Also, she is hoping for a man to serenade her. Well, it looks like that is going to turn into a reality soon. Genre: Country

Former Deputy Sheriff, Josh (31), is now an Uber driver who goes by the name “The Singing Uber Driver.” He has given over 3,500 singing Uber rides so far. Josh is a divorcee and is looking for someone who loves music as much as him. Genre: Country and Pop

Winner of Miss Pennsylvania Teen and Miss Philadelphia, Julia (27) is a professional recording artist who has been featured in ABC Thanksgiving Day Parade for eight years. She has struggled with cystic fibrosis for the most part of her life, and now that she is stable, she wants to walk the aisle with her dream man, singing all the way. Genre: Pop

Mariana (23) is a hopeless romantic who loves to travel and visit historical museums. She looks up to her father, who has raised her single-handedly. She is looking for a man who finds his way to her heart. Genre: R&B and Pop

Matt (32) has a band of his own – Brother Stone & The Get Down and credits his musical talent to his father. He hasn’t shaved his beard for seven long years. Matt wants a simple and humble girl as a life partner. Genre: Neo-Soul

Michael (31) takes pride in his two first names. His vibrant and fun personality can rock any party. One of his singles has been streamed over 100,000 times on Spotify. He wishes to settle down with someone who can rock his world. Singer-Songwriter

Freshly single, Natascha (33) has tasted international success in the music world and has been on tours with various music sensations. She has also won Miss New York Teen USA. Natascha is looking for someone who shares similar ideologies about life and love. Genre: Pop

Ruby (25) has been playing violin since she was two and is the youngest violin player to ever play at the Grand Ole Opry. Although she has dated many people from the music background, Ruby hasn’t found the one yet. She has also worked with Lady Gaga and Willie Nelson. Genre: Indie Pop

Rudi (24) has come to the show to find a life partner who complements her crazy side. She works as a demo artist and has once performed for a crowd of 20,000 people at Lollapalooza. Rudi is sneaky and can unlock your phone while you’re asleep. Genre: R&B and Pop

Russell (26) is a performer who also works as a knife-throwing and archery instructor. As a child, he went to a military boarding school. A shy and reserved person, Russell is looking for someone who can compel him to open his heart out. Genre: American Folk

Fresh off a break-up, Ryan (28) is looking forward to dating a woman who respects his passion. He can dance as good as he sings. Russell has a studio at home and can gobble up an entire pizza in one sitting. Genre: Jazz, Funk, Pop, and R&B

A self-taught guitarist and yogi, Savannah (25) has become a popular name in Nashville because of her musical talent. She quit her job in the corporate sector to pursue her dream. Now she wants to pursue the man of her dreams. Genre – Acoustic Pop

Sheridan (27) is the winner of a local band competition. He lived in his car, “Sheila,” on his music tours. He loves researching holistic remedies. He is looking for a woman who loves him for his inner personality and not just his music and hair. Genre: R&B Soul Pop

Trevor (29) is often referred to as the guy Katy Perry flirted with on American Idol, where he managed to reach in the Top 25. A former semi-pro hockey player, Trevor is also an avid surfer. He works a regular 9 to 5 job and performs at local clubs at night. He aspires to be someone’s No. 1. Genre: Country Pop

The Bachelor: Listen to Your Heart Judges

Apart from the celebrities mentioned above, we can also expect to see various ‘The Bachelor’ and ‘The Bachelorette’ couples, namely, JoJo Fletcher and fiance Jordan Rogers, Rachel Lindsay and husband Bryan Abasolo, Arie Luyendyk Jr. and wife Lauren Burnham, and Kaitlyn Bristowe and boyfriend, Jason Tartick.

Read More: Where is Bachelor: Listen To Your Heart Filmed?