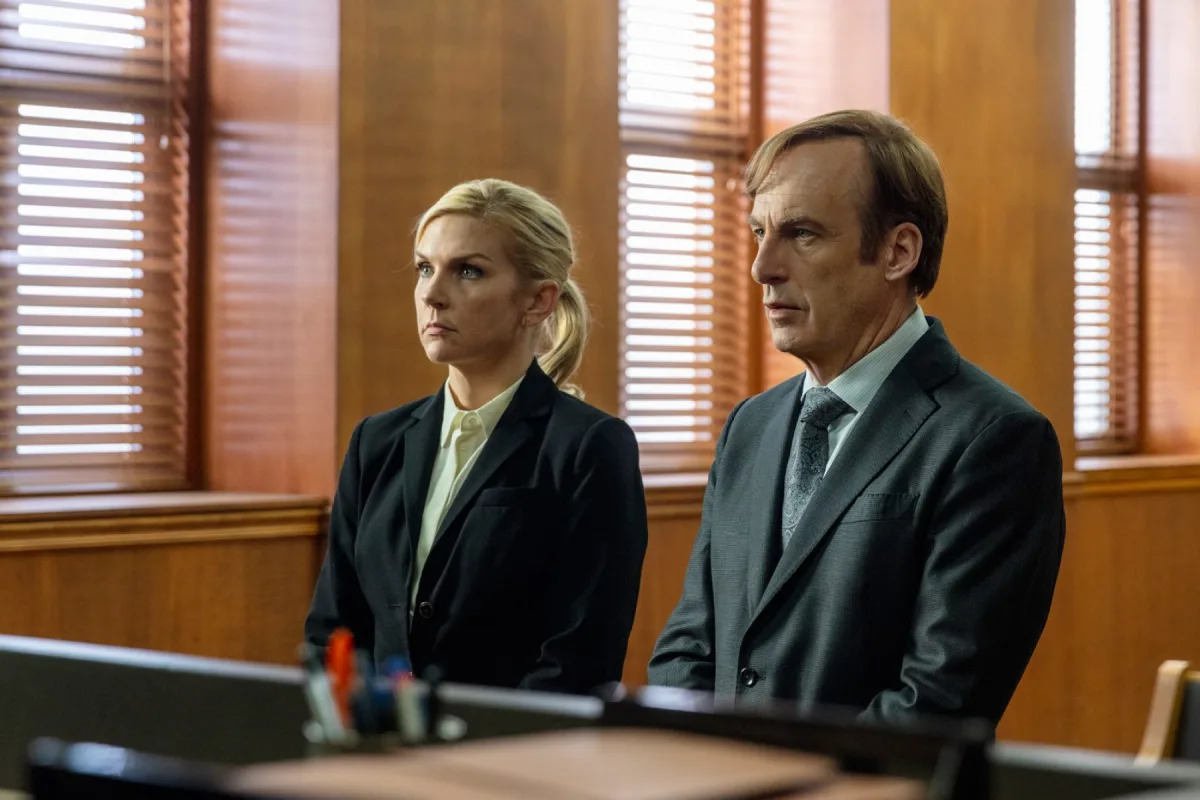 The sixth and final season of ‘Better Call Saul’ begins ominously. All the valuables in Saul Goodman’s (Bob Odenkirk) luxurious home get neatly packaged, and a life-size cut-out of him is thrown into the trash. This is the beginning of the end. In the first two episodes of season 6, titled ‘Wine and Roses’ and ‘Carrot and Stick,’ Saul and Kim (Rhea Seehorn) continue with the plans of sabotaging Howard in the Sandpiper case.

Lalo (Tony Dalton) finds a way to make people believe that he is truly dead. Nacho (Michael Mando) is on the run from an entire country. Gus (Giancarlo Esposito) starts to doubt the success of the killers he hired to take out Lalo. Here is everything you need to know about the ending of ‘Better Call Saul’ episode 2. SPOILERS AHEAD.

The season 6 premiere episode begins with a flash-forward scene where all the valuables from Saul’s home are packaged and taken. In the past, Nacho tries to find a way to reach the US border while avoiding both the cartel and the Federales. After surviving the attack by the hired killers that Gus Fring sent, Lalo visits the home of his doppelganger, kills him, and leaves his body unrecognizably burnt so that everyone would believe that he is dead. However, he makes an exception by letting his uncle Hector know. This appears to be a miscalculation as Fring figures out that he is alive while visiting Hector.

Meanwhile, Kim seems to thrive as a pro-bono lawyer. Although he has been assured that Lalo is dead, Saul continues to feel a certain amount of unease. He and Kim make plans to look for a new office space for him. He and Kim start to put their plan regarding Howard into effect. Saul visits Howard’s golf club under the pretext of being interested in joining it and leaves a small plastic bag of a suspicious-looking substance in the other man’s locker. When Howard opens the locker, Clifford Main is with him, and he sees the bag.

In episode 2, Kim comes up with a plan, and Saul reluctantly agrees to go through with it. He goes to speak to Craig and Betsy Kettleman and convinces them that Howard was doing cocaine while representing them and claims that if they hire him as their lawyer, he will clear Craig’s name. Predictably, Betsy fires him immediately after hiring him. She and Craig then visit Main to convince him to take the case, but neither he nor any other lawyer they visit agrees to represent them. Everywhere they go, they are told that they don’t have a case.

Eventually, Betsy starts to realize that Saul is planning something against Howard and tries to blackmail him. This is when Kim steps in and threatens to reveal their latest scam to the IRS. Because of the circumstances involving Nacho, a conflict starts to brew between Fring and Mike. In Mexico, Leonel and Marco Salamanca find Nacho. As the cartel doesn’t yet know who ordered the hit, they need Nacho alive. During the ensuing shootout, Nacho drives his pick-up truck into another vehicle.

As they leave the business owned by the Kettlemans, someone starts to follow Saul and Kim’s vehicle in their own car. It’s possibly safe to assume that this isn’t Howard. He probably has no idea what Saul and Kim are planning. The show wants us to believe that it’s Lalo. In the season 6 premiere, when he speaks to Hector, the latter urges him to find proof against Fring.

Although he is initially unsure how to do that, Lalo later tells his uncle that he knows exactly where he can find some proof. While Saul does have incriminating evidence that shows Fring was involved in getting Lalo back to Mexico, Lalo doesn’t know this. So, whoever is following Saul and Kim isn’t probably him either.

This leaves one other suspect: Gus Fring himself. Fring has realized that Lalo is still alive and knows that the other man will come after him sooner or later. He has already started to make sure that the assassination attempt will not be traced back to him. If it weren’t for Mike, Nacho would have been long dead. So, it’s very possible that Fring has sent someone after Saul and Kim.

No, Nacho is most likely not dead. After the shootout, Mike gets a call during his confrontation with Fring. He tells Fring that the call is from Nacho and that he wants to speak to him. If Mike isn’t lying — and he is not the type that lies arbitrarily — then the person on the other end of that call is indeed Nacho, who is likely in the cartel custody now.

This means that all hell is about to break loose. If Leonel and Marco believe that Fring had their cousin killed, they are bound to come after him. Eladio, the head of the cartel, is fond of Fring because he is very successful at what he does. But that doesn’t mean that he will find treachery and internal killings acceptable.

Read More: Is Better Call Saul Based on a True Story?