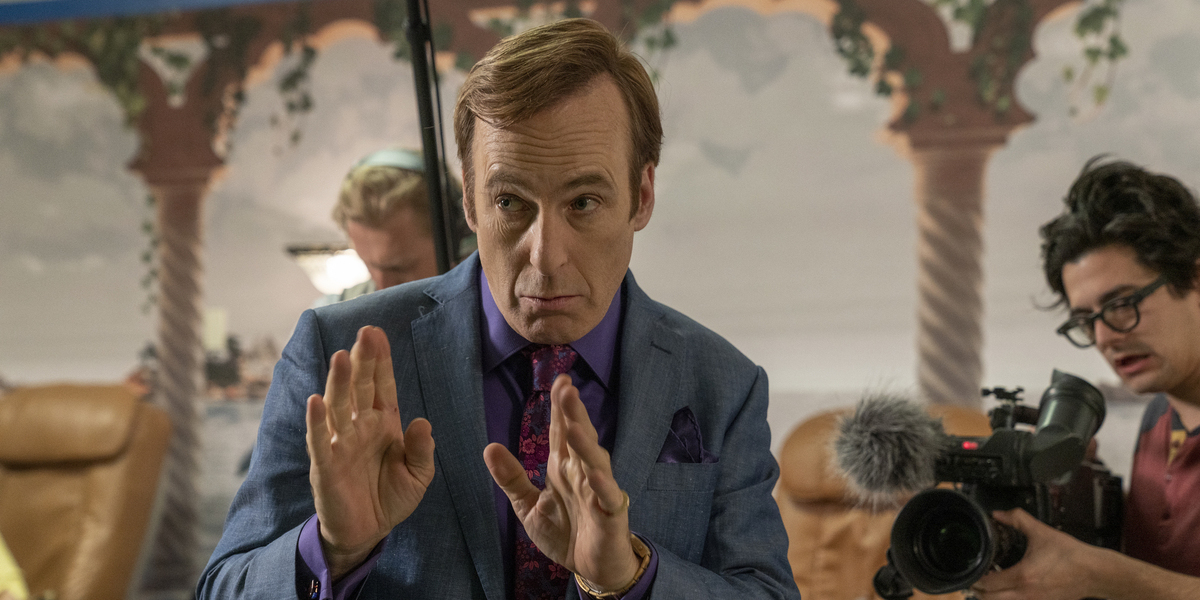 Vince Gilligan and Peter Gould teamed up to create the crime drama series ‘Better Call Saul,’ a spin on the egotistical lawyer Saul Goodman who graces ‘Breaking Bad.’ As a prequel to the original series, the spinoff chronicles Jimmy McGill – a formidable lawyer and former con artist – and his descent into the criminal underbelly of mid-2000s Albuquerque.

By the fifth season, the storyline already gets muddled with the introduction of the Juarez drug cartel. The season takes the narrative towards its destined closure while receiving four nominations at the 72nd Primetime Emmy Awards. The fifth season unfolds in and around Albuquerque, where locations like the “drug house” and Los Pollos Hermanos have become ingrained in popular culture. However, you may wonder where the season was filmed, and in that case, you may bank on us.

‘Better Call Saul’ season 5 was filmed in different parts of New Mexico in the southwestern USA. Filming for the fifth season commenced in April 2019, coming under wrap by September 2019. Let us now take you to the specific locations where the fifth installment of ‘Better Call Saul’ was filmed! 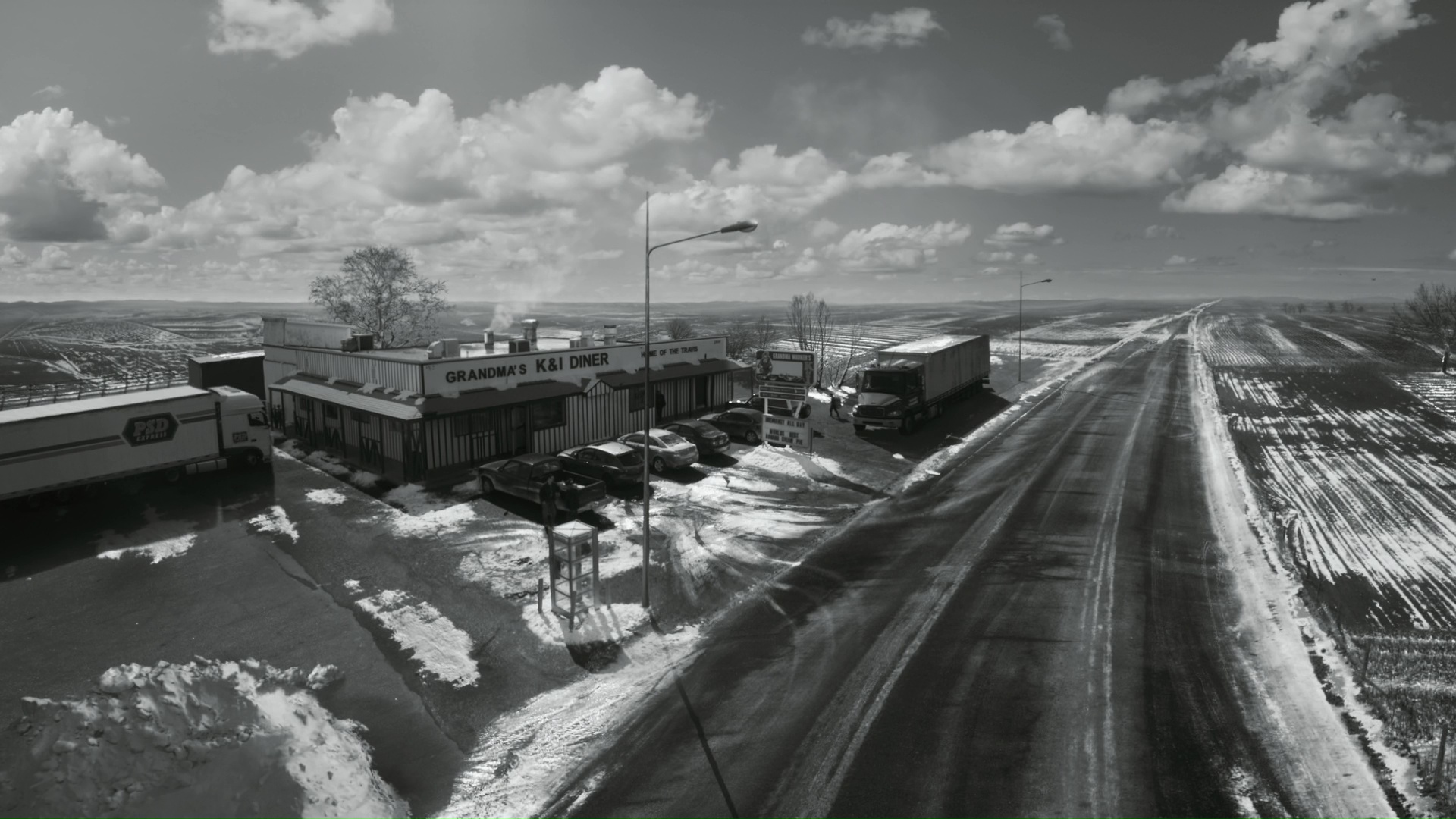 The fifth season opens with Gene visiting a diner in Missouri. However, the scene was filmed at Grandma’s K&I Diner, a cheap suburban eatery located at 2500 Broadway Boulevard South East in Albuquerque. Afterward, Gene returns to Cinnabon, a location that appears in the first episode of every season of the show. Although it’s supposed to be in Omaha, Nebraska, the Cottonwood Mall stands in for the onscreen location. The actual building is situated in Albuquerque, at 10000 Coors Bypass North West. 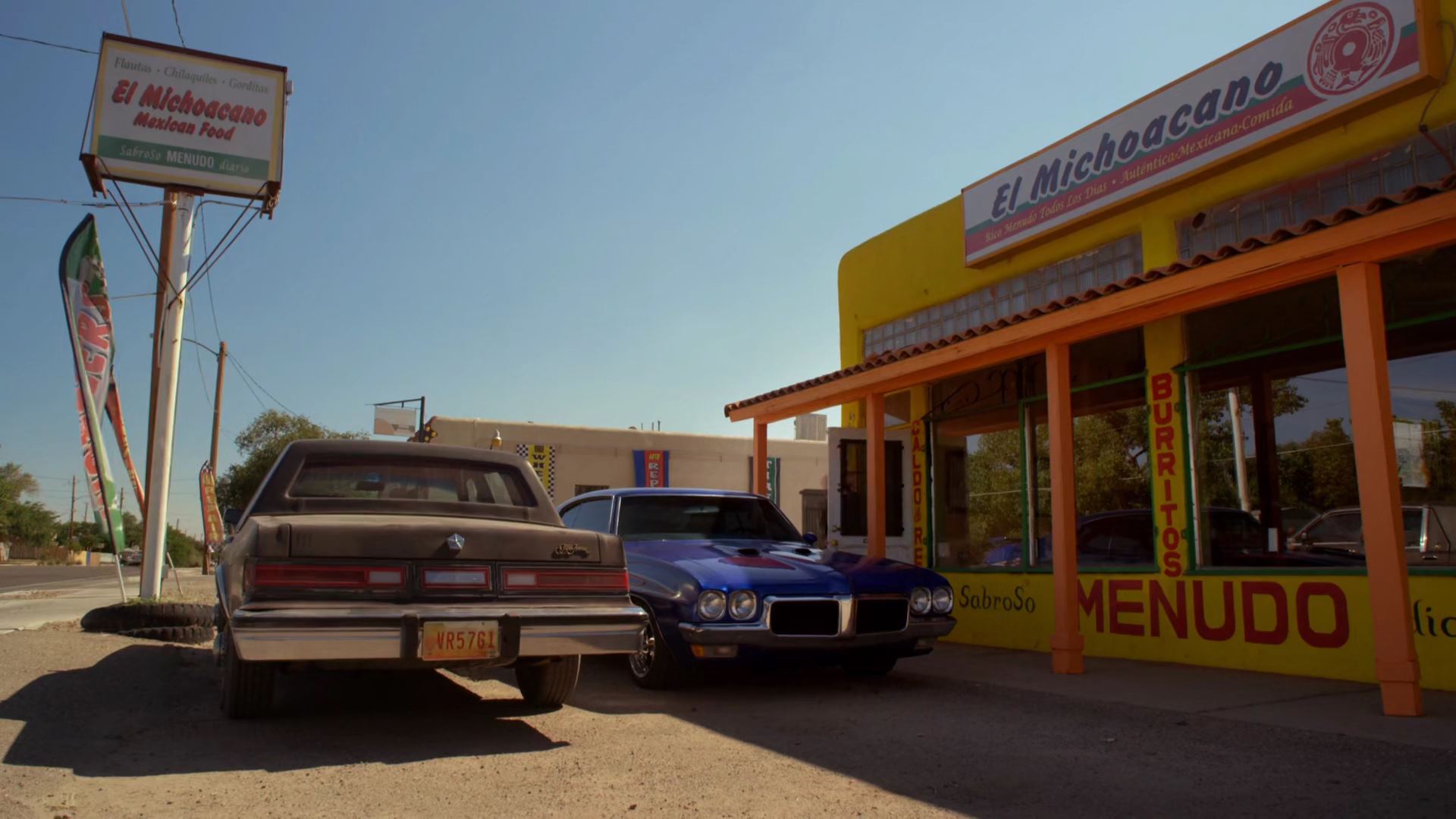 The vacuum cleaner store from when Gene calls Ed in the fifth season’s first episode is seemingly situated at 2714 4th Street North West. The location also figures in a few scenes in the ‘Breaking Bad’ spinoff movie ‘El Camino.’ The El Michoacano Restaurant – the den of Nacho and his gang – is actually El Moreno Restaurante y Paleteria. The Mexican restaurant is located at 2511 Isleta Boulevard South West. The courthouse featured in the show is the Bernalillo County Courthouse, the city courthouse of Albuquerque located at 400 Lomas Boulevard North West. 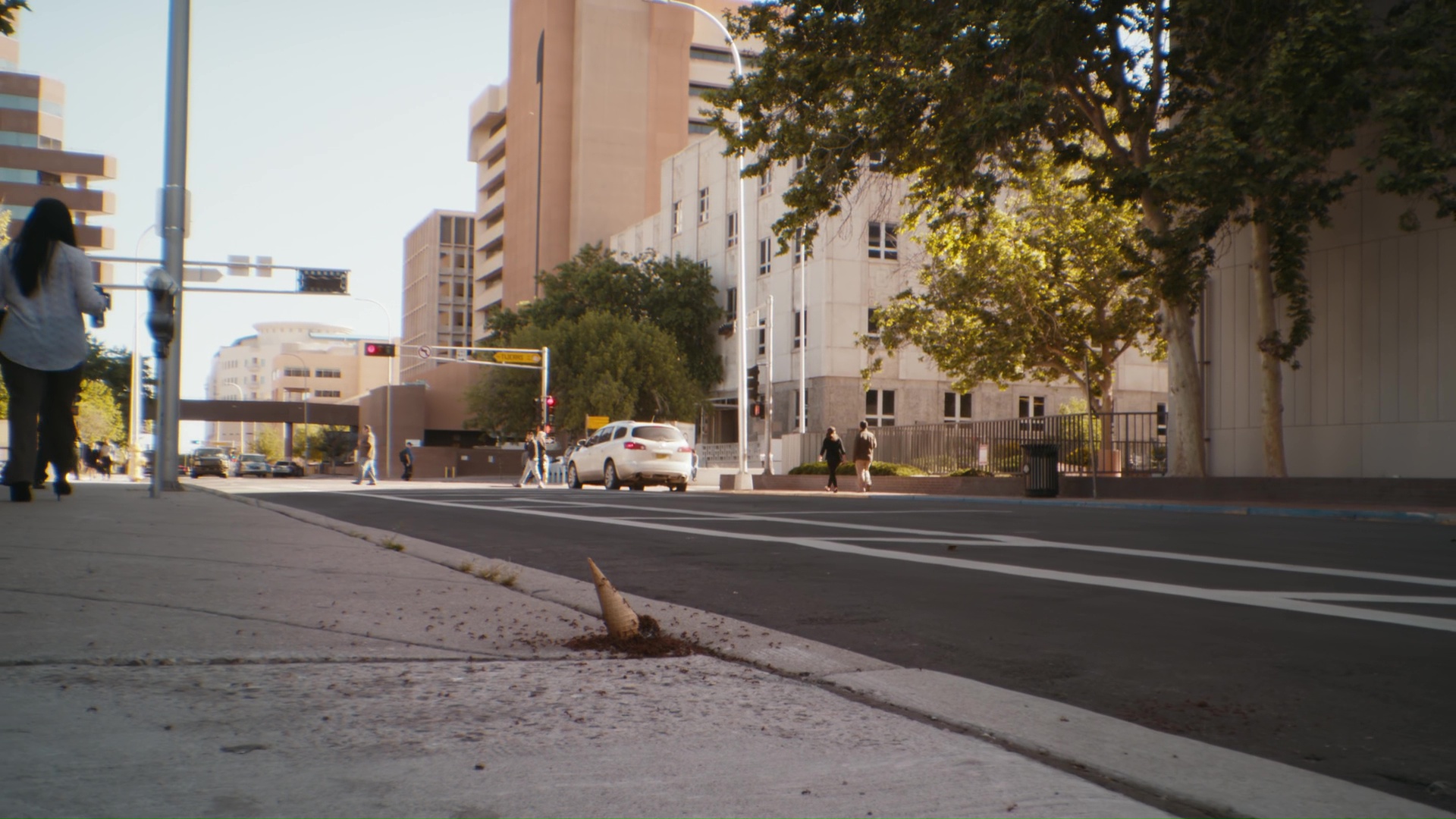 The gas station glimpsed in the second episode of the fifth edition is just opposite the courthouse, at 400 Lomas Boulevard North East, complete with a convenience store. A memorable sequence from the same episode was filmed near a property at 8504 Estates Drive North East. Another property located at 1501 San Patricio Avenue South West stands in for Nacho’s house in the series.

In one of the scenes of season 5 episode 2, Nacho is picked up from his house and meets his father at the eatery called Bienvenidos Amigos! While the diner is fictional, the scenes were supposedly lensed at Juanita’s Comida Mexicana, a Mexican restaurant and drive-thru located at 910 4th Street South West. 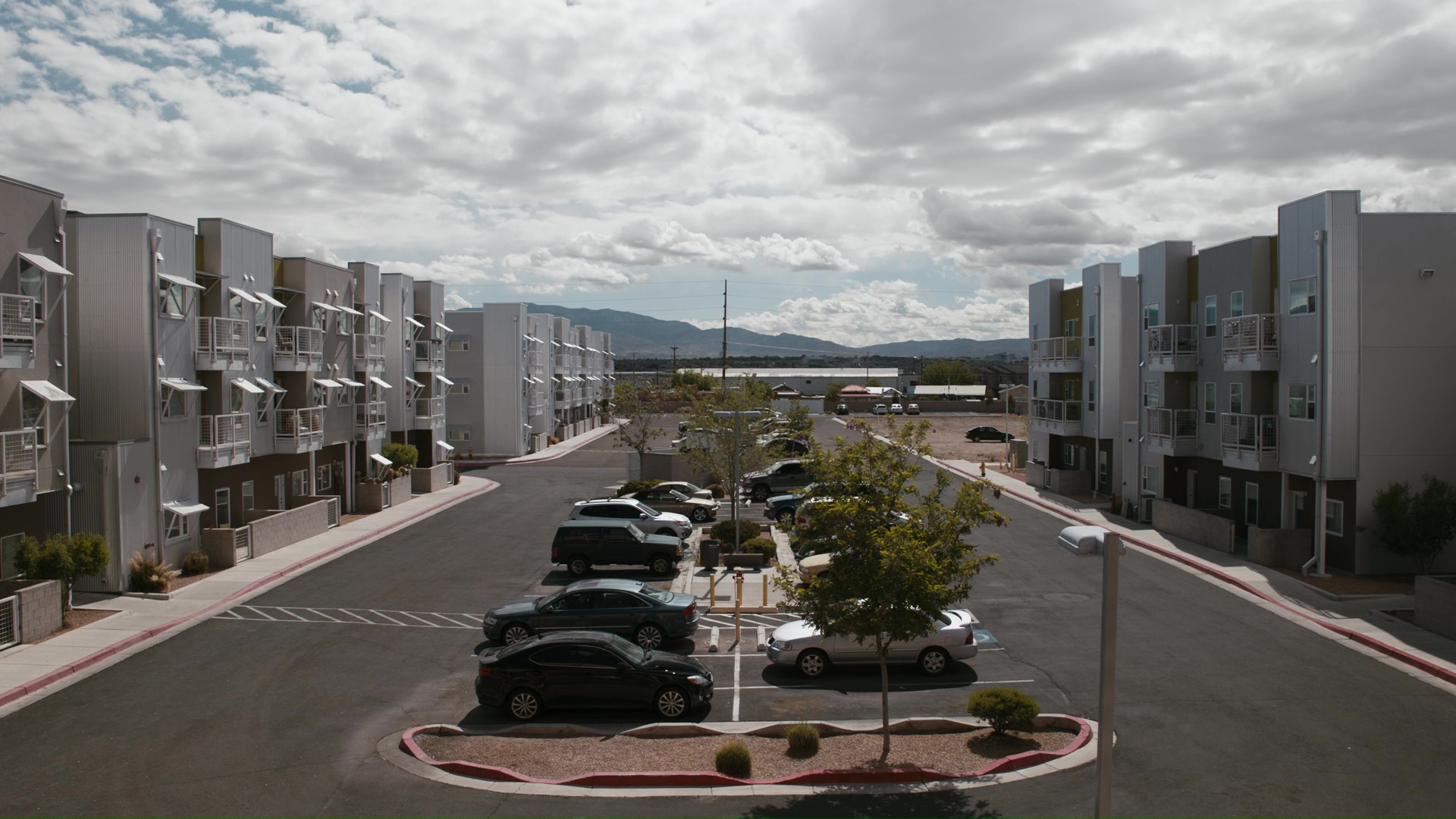 Kim’s gated community also lies in Albuquerque. The exterior scenes were filmed on the premises of The Artisan Apartments, an apartment complex located at 1751 Bellamah Avenue North West. In the second episode of the fifth installment, Jimmy and Kim head to look at a new house; that sequence was filmed at 8904 Roys Place North East. Towards the end of the episode, Lalo meets Hector in his retirement home. The scene was lensed at La Fonda del Bosque, a restaurant located at 1701 4th Street South West, within Albuquerque’s National Hispanic Cultural Center. 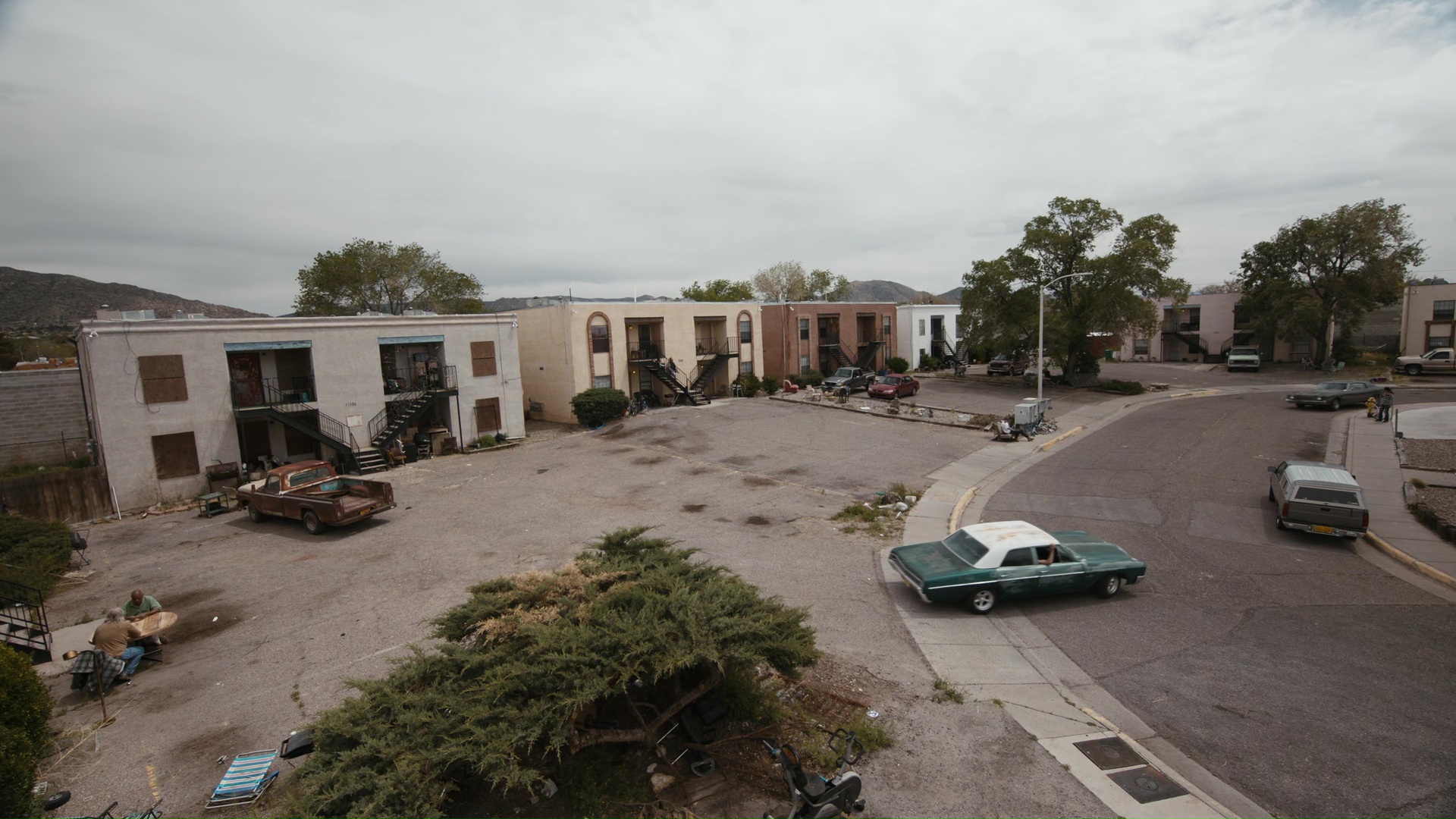 On the other hand, the crew took hold of a property at 8613 La Sala Del Centro North East to film the scenes involving the house of Mike’s granddaughter. In addition, this location gets a feature in the fourth episode of the season. To film the drug house scenes, the crew got hold of a property at 11124 Ventura Place North East of Albuquerque. In the third episode, Saul and Nacho visit a racetrack. The scene was lensed in Memorial Speedway Go-Kart Track, located at Los Picaros Road South East in the city’s outskirts. The vintage race track has been converted into a museum. 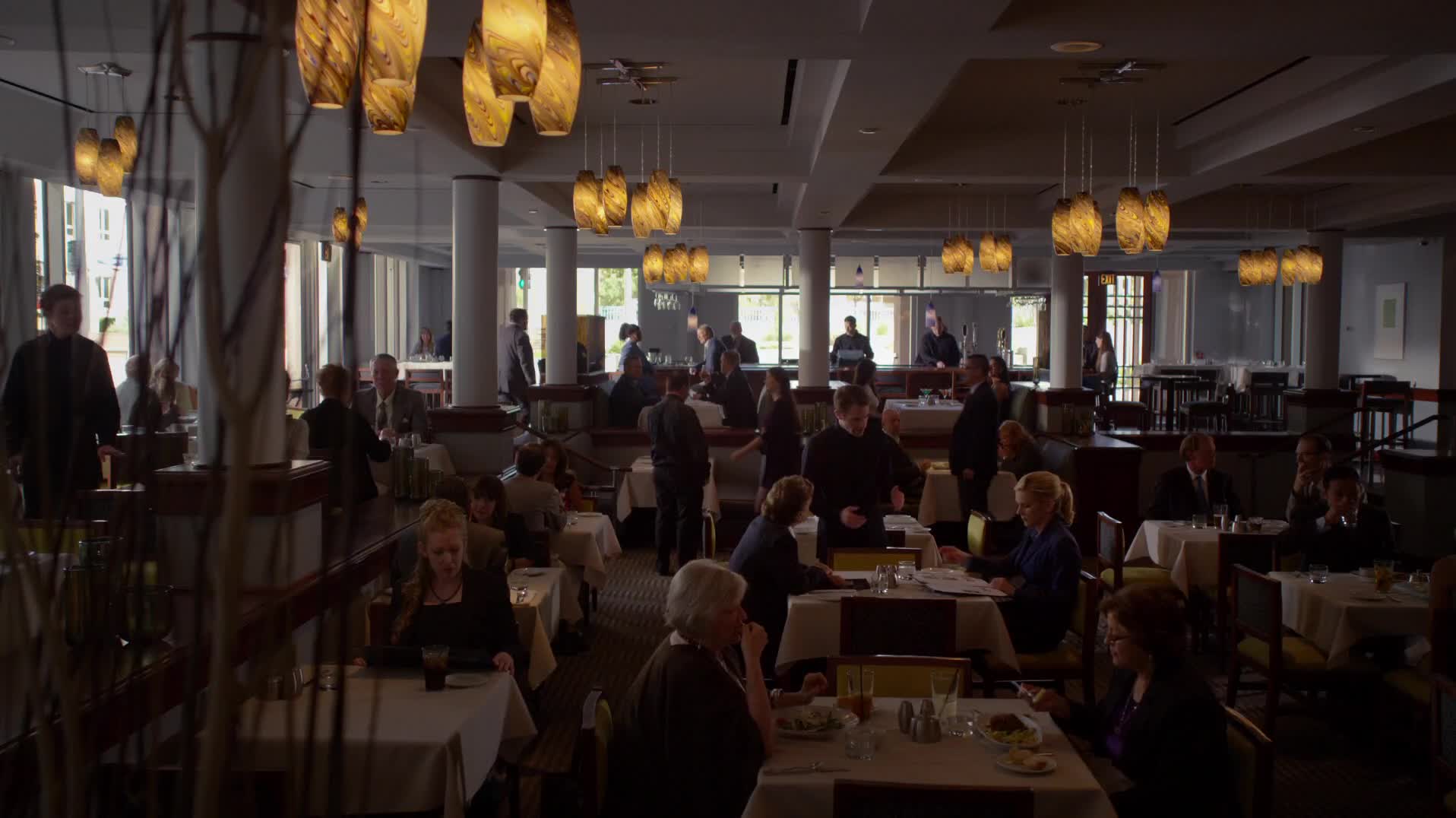 Jimmy has lunch with Howard in a posh restaurant in the fourth episode of season 5. The sequence was filmed at 330 Tijeras Avenue North West in downtown Albuquerque. The iconic Los Pollos Hermanos also makes an appearance in the episode. To film the sequence, the crew revisited the Twisters Burgers and Burritos, a burrito restaurant at 4275 Isleta Boulevard South West. Another property at 6301 Gibson Boulevard South East doubles as the second Pollos outlet that gets destroyed in the hands of Nacho and Gus in the seventh episode. It used to be a restaurant called Blake’s Lotaburger. 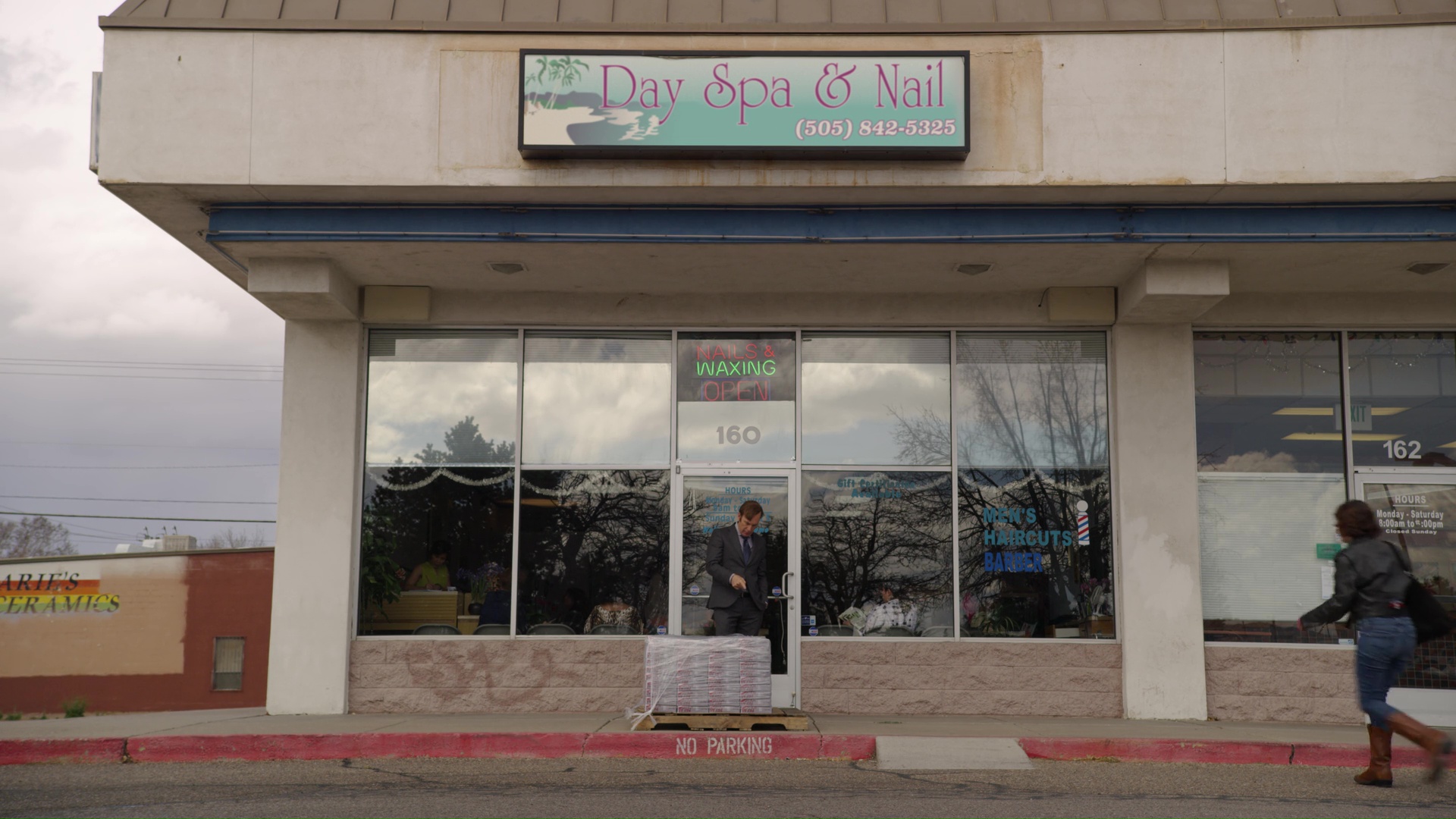 A nail salon curiously doubles as Jimmy McGill’s old office in the fifth and the sixth episodes of season 5. The Vietnamese nail salon, called Day Spa & Nails, stands at 160 Juan Tabo Boulevard North East in Albuquerque. Meanwhile, Kim’s office Schweikart & Cokely happens to be the Simms Building, a historic high-rise at 400 Gold Avenue South West. In the sixth episode of round 5, Mike visits a library for some research. The exterior location, in this case, is the San Pedro Public Library, which is located at 5600 Trumbull Avenue South East. 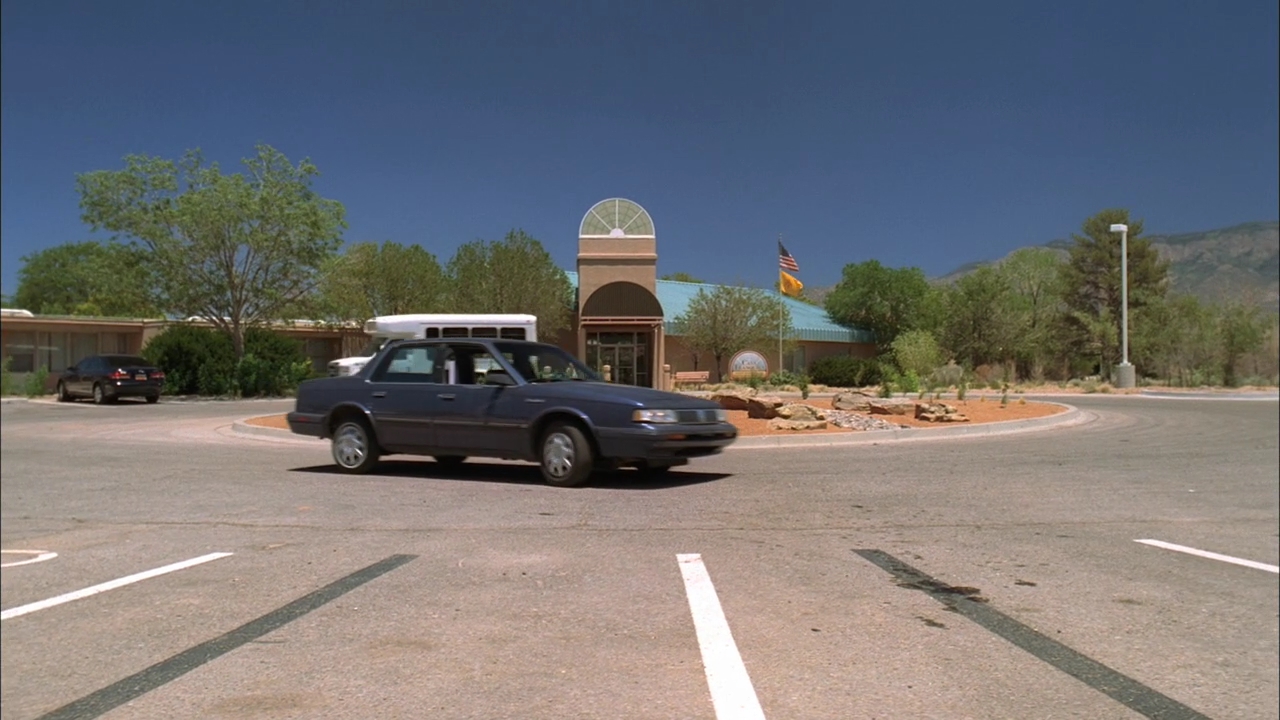 In the ninth episode of season 5, Lalo visits Hector in the nursing home. The sequence was captured at Avamere Rehab at Fiesta Park, a nursing home and rehabilitation center located at 8820 Horizon Boulevard in Albuquerque. The season finale begins with Jimmy and Kim hiding in a downtown hotel. The hotel scenes appear to be filmed at the Hotel Andaluz Albuquerque, a four-star accommodation at 125 2nd Street North West.

The location scouts seem to have found a perfect match at 204 Edith Boulevard North East for scenes depicting Mike’s house. Additional sequences were filmed in and around Albuquerque, including 501-599 4th Street North West, 2718 Manzano Street, and 6021 Anderson Avenue South East. 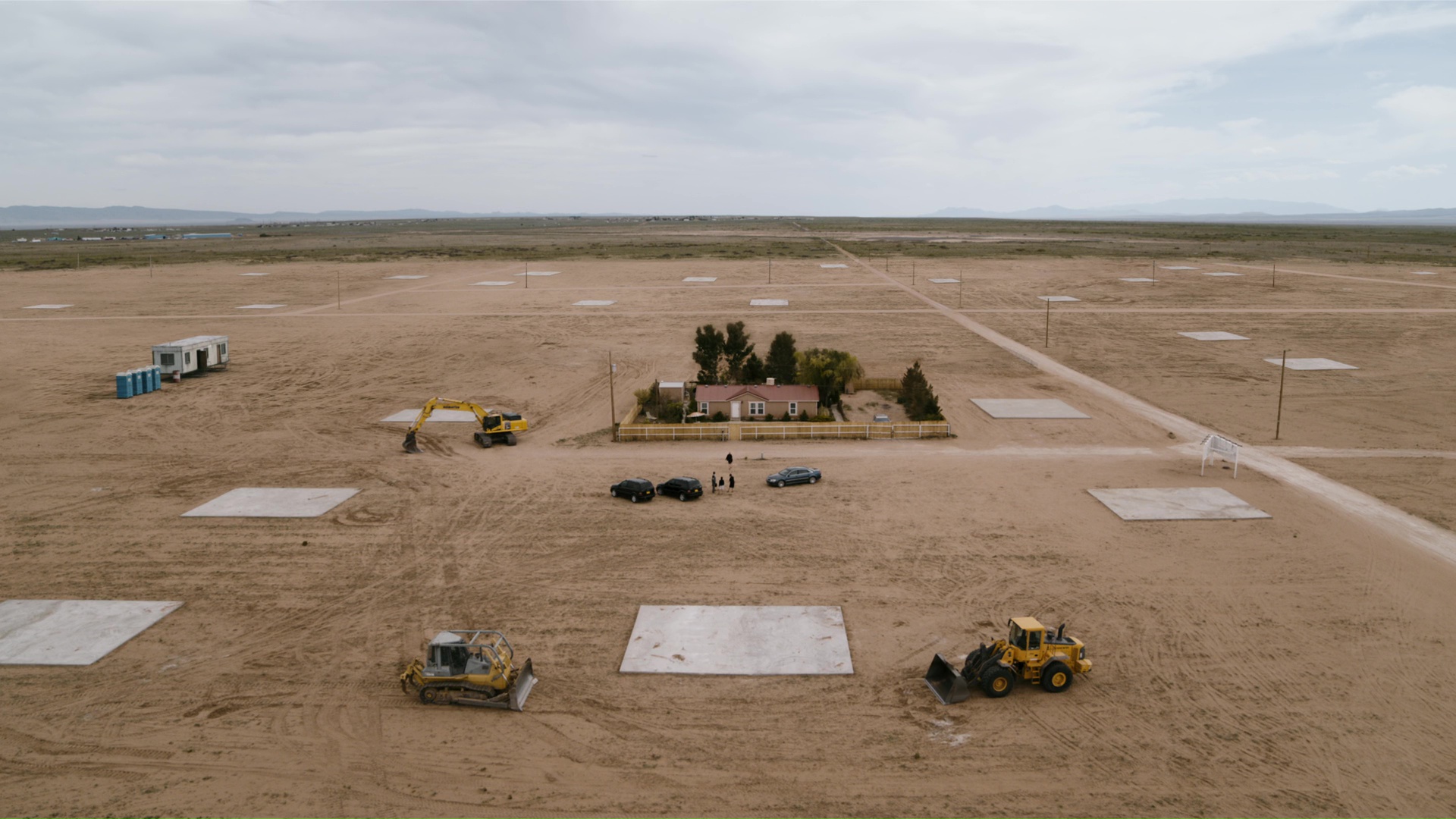 The New Mexico city of Belen provides the backdrop for a handful of scenes in season 5. At the beginning of the fourth episode, Jimmy visits a shady thrift store. The team captured the sequence at Bethlehem Thrift Shop at 1300 South Main Street in Belen. Mr. Acker’s house, which Mesa Verde plans to demolish, lies at 158 Rayo Road, in a suburban neighborhood of Belen, around 35 miles south of Albuquerque.

The production team often ventured outdoors to capture the barren landscape of New Mexico. Consequentially, several scenes in the show’s fifth edition were filmed in the Sandoval County of New Mexico. The team lensed scenes in the village of Corrales, particularly that involving Lalo’s sprawling mansion in the series. According to sources, these scenes were filmed in an estate located at 12 Camino de las Brisas in Corrales. 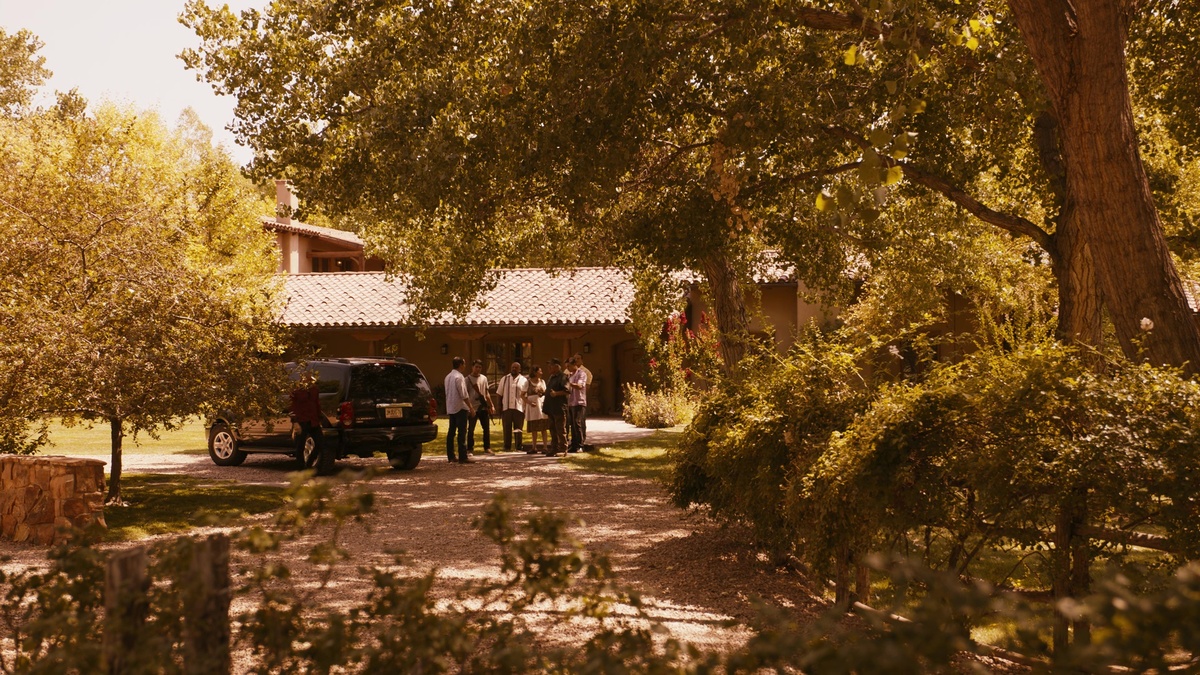 On the other hand, a property located at 40 Camino Vega Verde in Corrales provided the exterior setting for Howard’s house. Furthermore, the team shot a few pivotal sequences in the census-designated place called Placitas. For Don Eladio’s estate, the crew used 491 State Highway 165 in Placitas. The property even has a pool.

Several scenes were lensed in Santa Fe County. In the final moments of episode 4, Mike wakes up at what looks like a farm. The sequence was captured at El Rancho de las Golondrinas, or “The Ranch of the Swallows.” Located at 334 Los Pinos Road in La Cienega – a census-designated place outside the city of Santa Fe – the historic farm has been converted into a museum and a cultural center. The location’s history dates back to the early 1700s when it was an instrumental stopping place along the Camino Real – the Royal Road that connected Mexico City to Santa Fe.