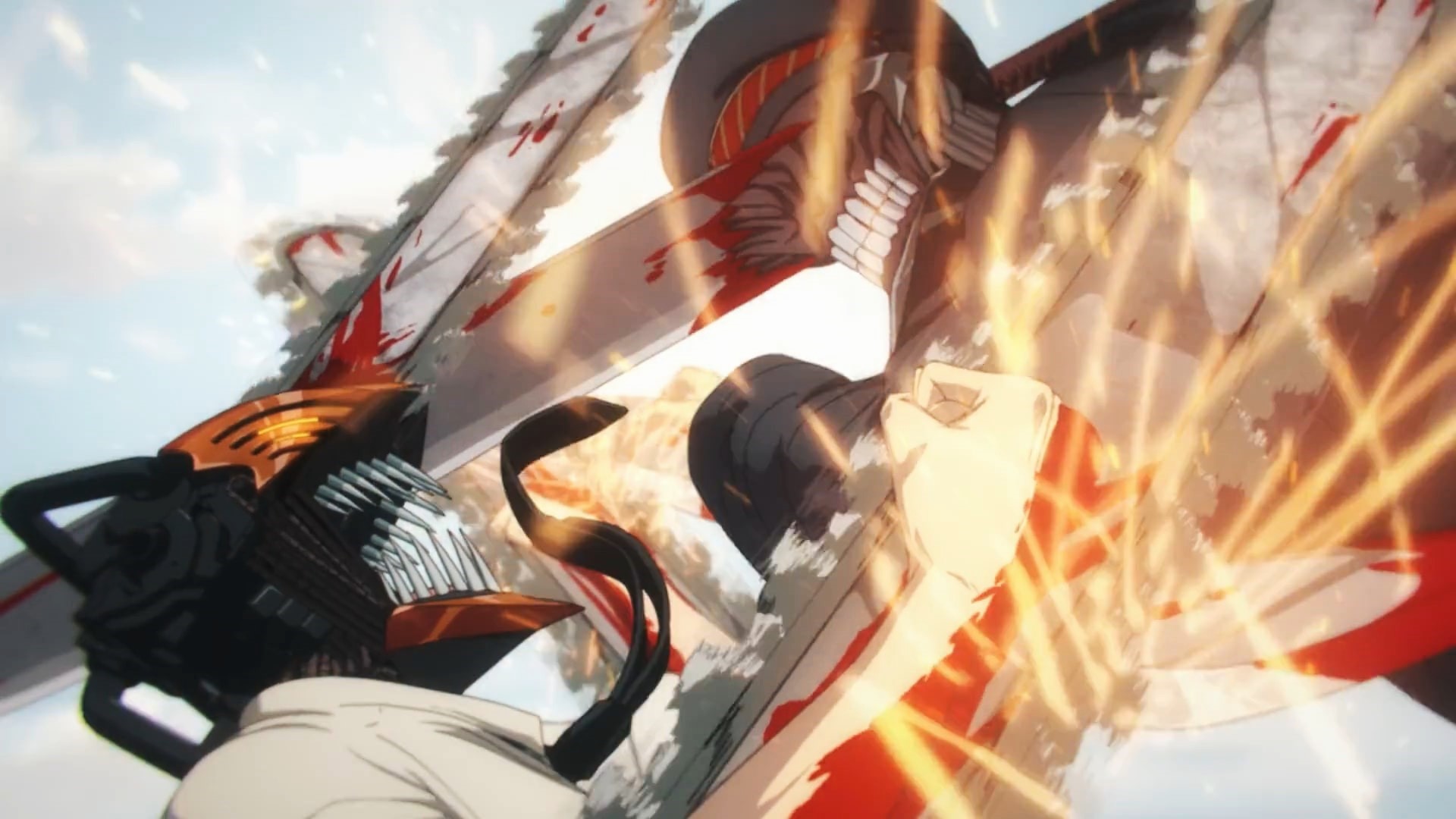 In ‘Chainsaw Man’ episode 12 titled ‘Katana vs. Chainsaw,’ Aki manages to kill the Ghost devil after the latter inexplicably lets him go from his grip and then even hands a cigarette to him. Meanwhile, Denji continues to find the Katana Man and eventually finds him as well. After Sawatari is taken into custody and Kobeni is walking her back to her colleagues waiting outside, something unexpected happens. Here’s everything you need to know about the ending of ‘Chainsaw Man’ episode 12. SPOILERS AHEAD!

After the Ghost Devil begins to tighten her grip on Aki’s neck, he seems to give up on life and recalls all the memories he has made with Himeno. But all of a sudden, the devil drops Aki on the floor and gives him a cigarette. Aki recalls that Himeno had told her that the Ghost Devil can only see fear as it has no eyes. After observing the inexplicable behavior of the devil, Aki stops fearing for his life and walks calmly to its neck. As Himeno’s memories rush to his mind, Aki kills the Ghost Devil with a single swing of his sword. 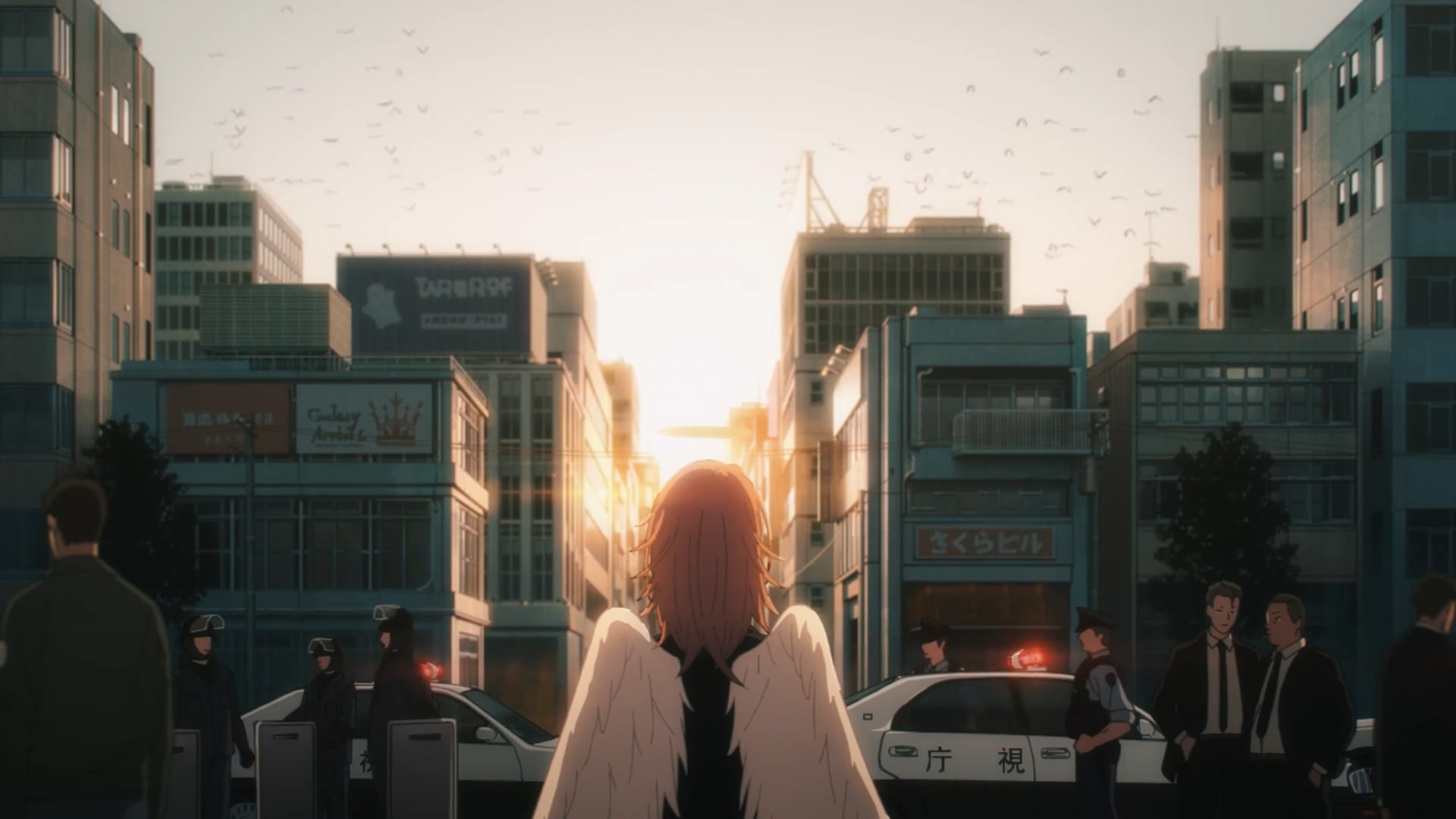 When he turns back, he finds Sawatari standing behind him, prepared to use the Snake Devil on him. Meanwhile, Denji and Power seem to be looking for the Katana Man. When they find a group of zombies on one floor, Power decides to fight them. But Denji continues his search and takes the lift to another floor where he finally meets the Katana Man with his two minions. Katana Man tries to make Denji feel guilty about killing the yakuza members but he does not seem to care. The two then start a brutal brawl and show no mercy.

Soon they end up on a train while fighting each other. Katana Man uses his lightning-fast speed to cut Denji’s arms. He then asks him to apologize for killing his father but the Chainsaw Man still shows no remorse for his actions. This infuriates the Katana Man, who feels that he has already won the fight. So to end things, he decides to go for one last attack and breaks the Chainsaw protruding out of Denji’s head. However, he then falls to the ground realizing very late that the Chainsaw Man used a chainsaw protruding out of his leg to cut him into two halves.

Chainsaw Man Season 1 Finale Ending: Is Akane Dead? What Happened to Her?

After Aki kills the Ghost devil, he turns his attention towards Sawatari Akane. She is prepared to use her contract with the Snake devil to attack Aki but it turns out that Kobeni arrives at the scene just at the right time. When Sawatari’s attention is focused on Aki, Kobeni put a knife to her neck prepared to kill her on the spot. However, Aki asks her not to do anything stupid as he probably wants Sawatari to be taken into custody for further investigation. He then leaves the responsibility of taking her outside to Kobeni and leaves presumably to look for the Katana Man. 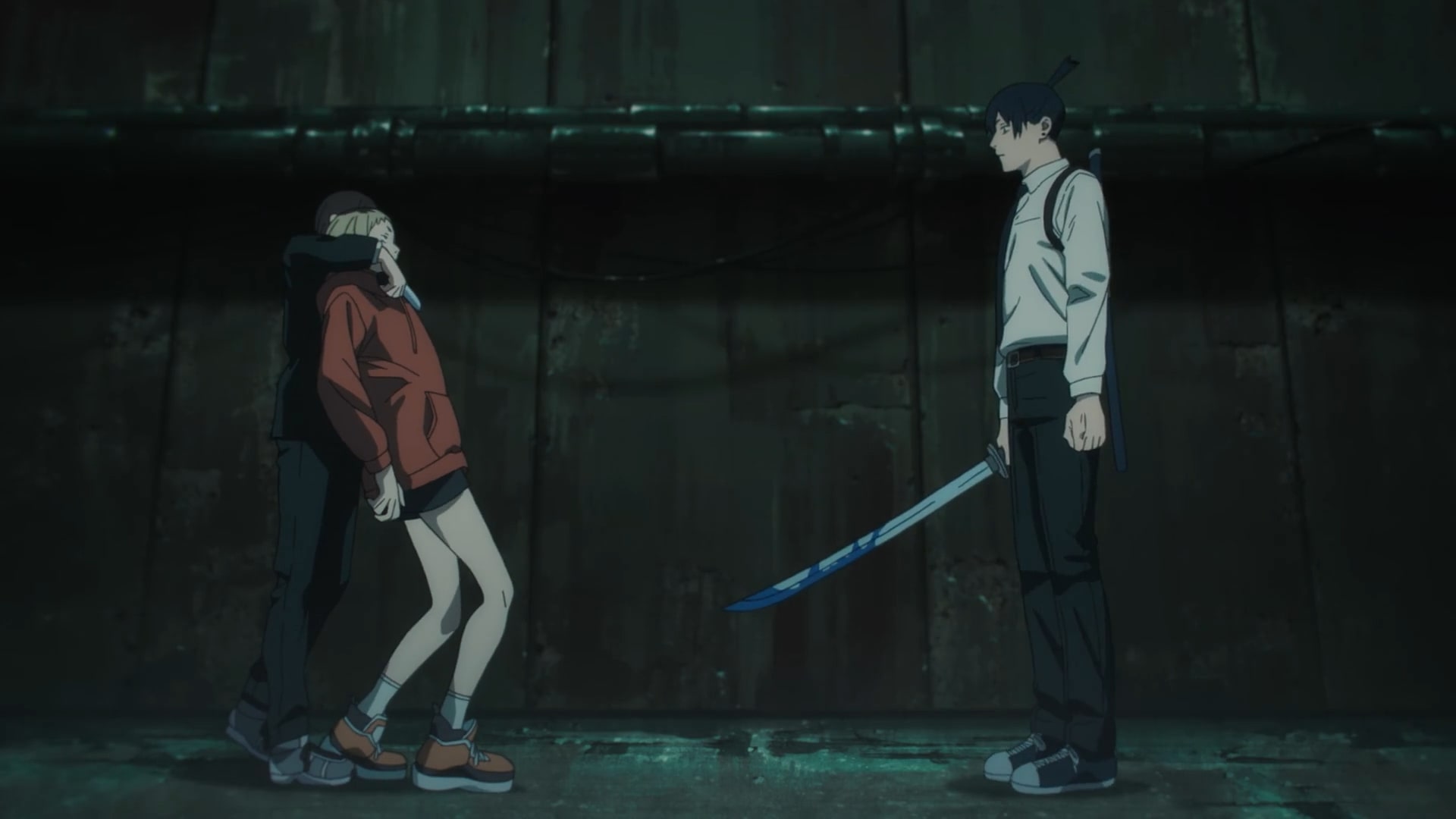 When Koben is just finding her way to her colleagues outside, Sawatari is suddenly attacked by the Snake devil and dies on the spot. Makima later reports to the seniors that it was Sawatari who played the defining role in the attack on Division 4. She then also revealed that Sawatari had made a contract with the Gun devil as she desperately wanted Chainsaw Devil’s heart. The reasons for the relentless targetting of Denji for the heart in his body have not been explained at this point and fans will probably have to wait till the end of season 2 to eventually learn the truth behind it.

Interestingly, Makima also mentions in her report that they have taken 1.5 kilograms of Gun Devil’s tissues from the building where the terrorists had been hiding all this time. After it is kept with 5 kilograms of the tissues the Public Safety Devil Hunters already had in their possession, it has now started moving towards Gun devil’s body. This is a huge success since Makima has asked Denji to kill him and now they have a way of finding him.

Why Did Ghost Devil Give Aki a Cigarette?

When Aki is being strangled by the Ghost devil, he recalls all the memories he has made with Himeno. It appears that he has given up on life but then suddenly he finds himself on the floor. When he opens his eyes, the Ghost devil gives him a cigarette, which has “Easy Revenge” written on it. As mentioned earlier, Aki recalls Himeno telling him that the Ghost devil does not have eyes and it can only smell fear. This allows him to kill the devil just moments later. 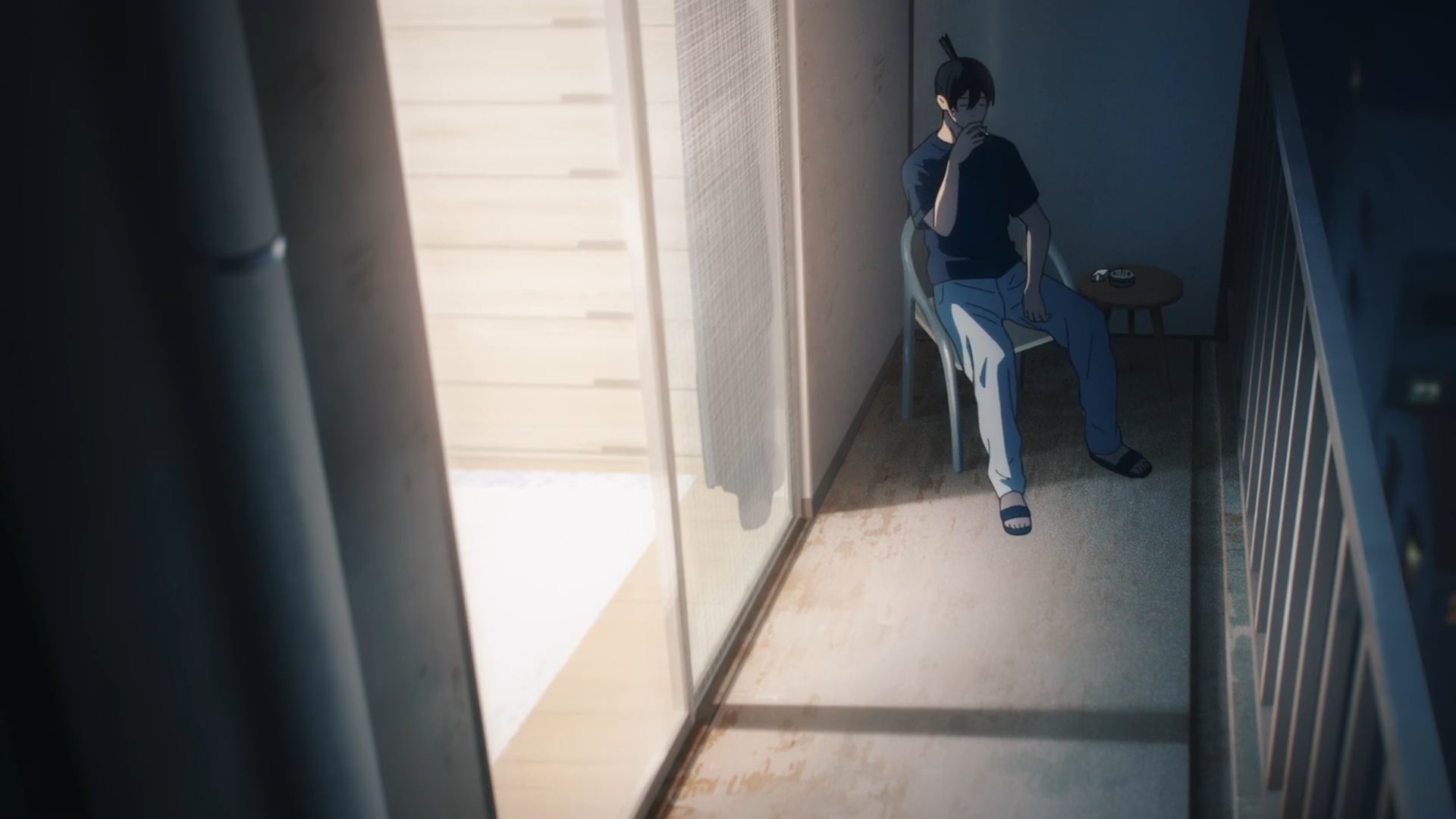 Later that evening after Denji and Power have fallen asleep, Aki smokes the same cigarette on the balcony. It is not really explained why the Ghost devil will hand over a cigarette to Aki, but it’s possible to speculate based on the previous events. Just before her death, Himeno had asked the Ghost devil to give her all her powers in exchange for herself. Just moments later, Himeno’s body started disappearing until she was gone and only her uniform was left on the ground.

It seems that the Ghost devil has engulfed her according to the contract but despite this Himeno seems to have retained some influence on the devil. While it is never explained in Fujimoto’s manga if this is possible or not, the scenes do seem to imply exactly that. Even before Aki kills the Ghost devil, he recalls his friend as if there was some semblance of her that was still left in the devil.

What Happens to the Katana Man? 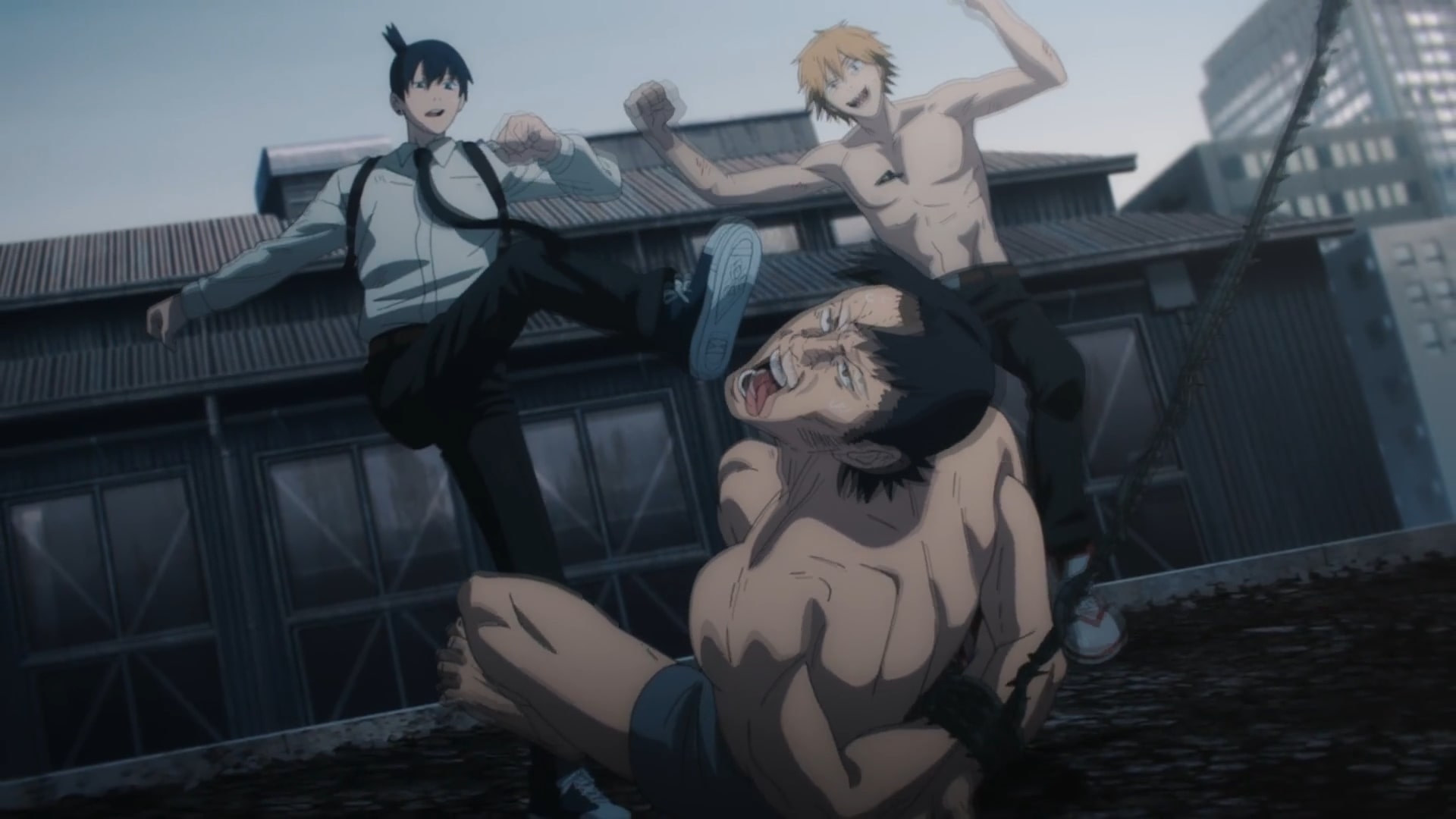 After he is cut in half by Denji, the Katana Man opens his eyes to find himself tied to the train. It turns out that just like Denji, he too can survive seemingly fatal injuries and turn back to his human form as if nothing ever happened. Denji reminds him that he killed Himeno and in order to take revenge he comes up with a strange idea. He knows that the Katana Man will be taken into custody once the police arrive but before they come he asks Aki (as soon as he arrives on the scene) to play a tournament with him. They take turns hitting the Katana Man between his legs with the motive to get the loudest scream. It seems that they continue to take revenge for their friend this way as long as they have the Katana Man in custody. Once they are done, he is probably arrested and put on trial.