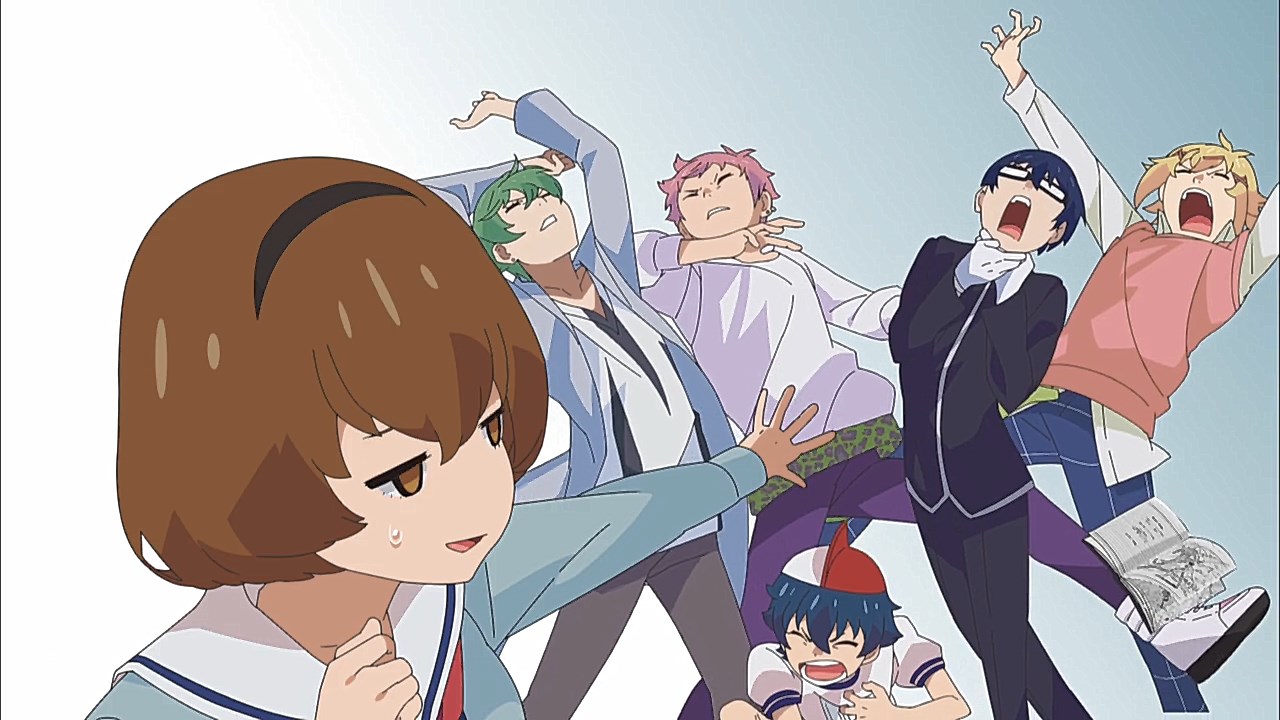 The term “Chunibyou”, to put it simply, is Japanese slang for “embarrassing behavior” and in the past, several anime shows have centered their premise all around it. A large amount of anime that depict this theme feature female characters and for obvious reasons, these are directed towards a male audience. But ‘Chuubyou Gekihatsu Boy’ takes a slightly different approach where it shows male characters who suffer from chuunibyou complex.

Pretty much like all the other similar shows, it shows how it’s really odd for young teenagers to act out their fantasies as they do and most of its situational comedy moments rely on this. Created by Studio Deen, which is known for producing some great anime shows like ‘Fate/Stay Night‘ and ‘Fruits Basket‘, ‘Chuubyou Gekihatsu Boy’ has some good quality animation and even its simple style suits the comic tone of the anime. So if you’re looking for a new light-hearted comedy anime this season, this is the show you should go for. And if you have already watched the first season, to know more its sequel, move on to the next section.

Outburst Dreamer Boys Season 2 Release Date: When will it premiere?

So far, ‘Chuubyou Gekihatsu Boy’ has received average reviews on most platforms and is only slightly popular amongst fans. While it does have a small fan following, it is not as well-known as other similar anime shows that feature chuunibyou characters. So from the looks of it, the twelfth episode will probably mark the end of its first season and we will not get to see any more of it in the future. Also, since Studio Deen has way too many projects under its belt right now, it seems very less likely that the studio will consider renewing the series in the future. If by any chance, the anime is being considered for a sequel, we can expect ‘Chuubyou Gekihatsu Boy’ season 2 to premiere sometime in 2021. As soon as we get any confirmation regarding that, we will update it here in this section.

You can watch the English subbed version of ‘Chuubyou Gekihatsu Boy’ Season 1 on HiDive.

‘Chuubyou Gekihatsu Boy’ centers a high school girl named Mizuki Hijiri who is forced to move to a new school because of some personal reasons. This is where she runs into the Heroes Group of young boys who suffer from chuunibyou, a mental disorder that forces them to live in an imaginary fantasy world. Somehow, she gets stuck with the group and has to face all of their fantasized antics which do not seem to end at all. As they completely lose themselves to their fantasies, Mizuki reaches a point where she begins to question her own sanity. What follows is the slapstick story of a young girl who only seeks a peaceful life in school but unfortunately for her, that seems like a distant dream after she gets surrounded by delusional boys, who are determined to embarrass her.

Mizuki Hijiri is a young high school girl who moves to a new school in the hope that she will be able to have a peaceful year. But soon, she somehow gets caught up with the activities of the school’s Heroes club which includes all delusional chuunibyou boys. As much as she hates being around them, she can’t help but empathize with their condition and that’s why she chooses to stick around to help them. But things don’t turn out the way she expects them to be and in turn, the weird antics of the boys start driving her crazy. In appearance, Mizuki has short brown hair and small light brown eyes. Like all the other characters of the show, she is usually seen in her school uniform.

Yamato Noda is a cheerful young boy who is a member of the Heroes Club. He is often lost in his own imaginary world where he really wishes to be a superhero. To become one, he puts himself through some rigorous training every single day. Compared to all the bizarre fantasies of the other boys in the club, Yamato still seems a bit normal. He has short dark blue hair and big gleamy eyes. He also sports a red and white hat at all times.

Tomoki Takashima is a handsome boy who is another member of the Heroes Club. With his good looks, he could probably date any girl from his school but he only seems to be interested in 2D girls. According to him, Sora Chan from the game “I Love!”, is his actual wife and he does not want to be with anyone but her. He has sharp features with spiky blond hair and deep yellow eyes and he usually walks around with a smile on his face.

Kazuhiro, whose other name is Touga Ryushouin, is a lonely prodigy who is often lost in his own world. He firmly believes that the god of darkness lives in his right arm and that’s one reason why he stays away from people. He claims that in his past life he was born from  “the forbidden union of a tenshi and an akuma.” When it comes to his appearance, he has a serious face with short blue hair and he also sports a pair of rectangular glasses.

Rei is another member of the Heroes Club who obsessively does things in a suggestive manner. He also owns a cat named Benjamin. In appearance, he has short pink hair and small yellow eyes. He hates it when people look at him with pity and awe, so in an attempt to hide his insecurities, he tries to do things in a way that would make him too really cool.

Futaba is a transfer student who has just returned to Japan and compared to the other boys of the club, he initially appears to be quite normal. But he is actually a tone-deaf narcissistic singer who believes that he’s the best in the world. He has murky green hair and also sports an earring in his right ear.