All Fate Anime, Ranked in Order They Should be Watched 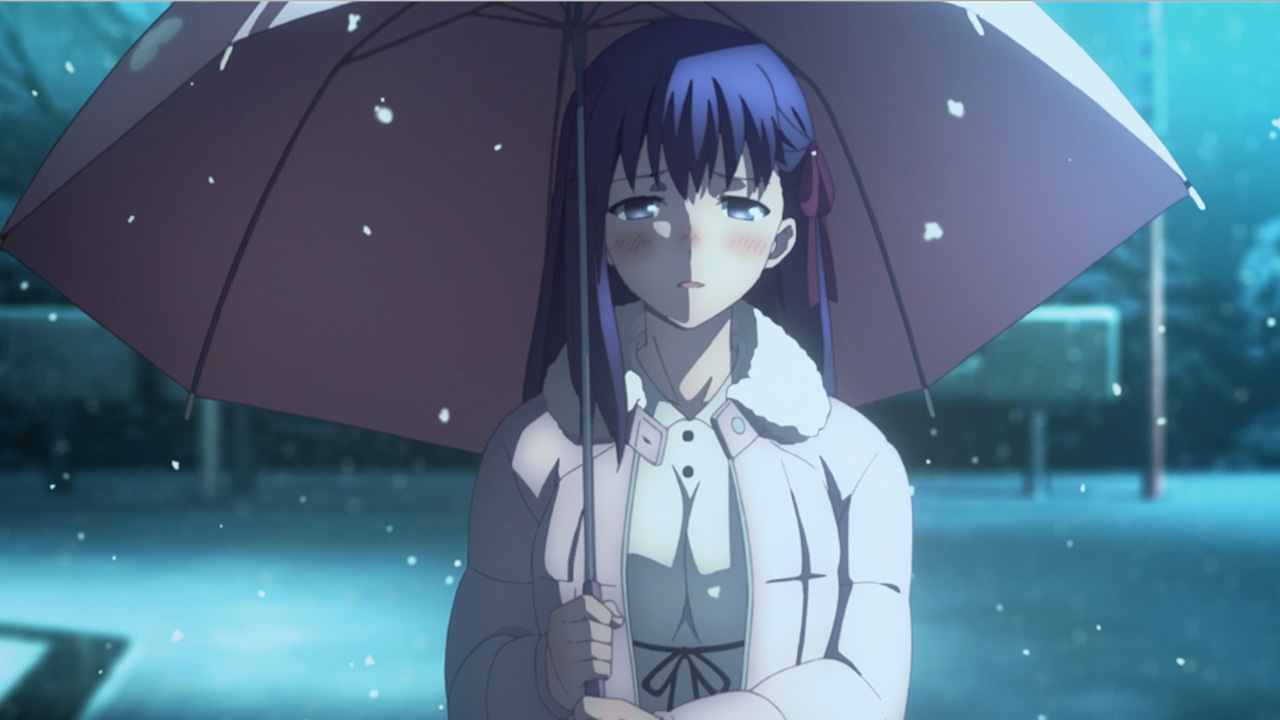 The summer anime season is just around the corner and many fan-favorite anime sequels are either out or have been scheduled for the coming one year. Some of these most awaited anime sequels include ‘Mekakucity Actors‘, ‘Saiki K‘ and many more. Out of all these anticipated sequels coming out in 2019 and 2020, one that many viewers look forward to is the third installment of ‘Fate/Stay Night: Heaven’s Feel’ movie series that is scheduled for 2020. The currently running ‘Fate/Stay Night‘ franchise started off with a visual novel back in 2004, which was later adapted into an anime in 2006. The entire series has gained an enormous fan base since then and the whole franchise has grown substantially with its video games, mangas, spin-offs and of course, the main anime.

Many anime viewers, especially the ones familiar with the visual novels, were able to get their hands on the series during its earlier phases. So watching the latest movie will not really be a problem for them as they very well know what’s going on in the show. But if you’re one of those people who are a little late to this party and you really look forward to catching up with the series before the next installment is released, then this article is just for you. Pretty much like the ‘Monogatari Series‘, even this one has a rather complex watch order. Now you can always watch the anime based on the release dates of each of its season, but now that you have the advantage of choosing your own watch order, why not consider this opportunity? We have created a chronological watch order list here for all those who are lost in the ocean of its sequels, spin-offs, and side-stories.

Now before we get to the list, one must know that the visual novel from which the anime has been adapted from involves three different routes: one is the “Fate” route which is the game’s initial default suggestion, then there is the “Ultimate Blade Works” route which assumes that you’ve already been through “Fate” and involves a whole lot of plot twists and then comes the final “Heaven’s Feel” route, which is the darkest route out of all and has been adapted into three anime movies. With all that said now, here’s the list of the best order in which you should watch the ‘Fate’ anime: 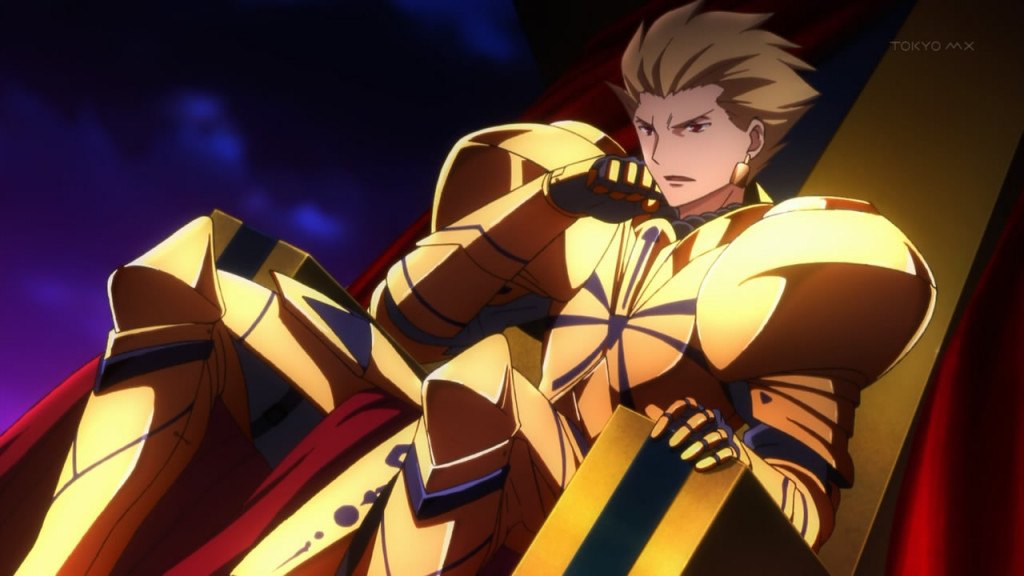 If you go by the release dates of each season, then ‘Fate/Zero‘ was not the first one to be created. But chronologically, if you go by the timeline of the anime, this is the first part of the story that introduces you to Fourth Holy Grail War. ‘Fate/Zero’ is also known to be one of the best parts of the entire series for its deep characters and stunning visuals. So that’s another reason why new viewers should go for this first as it will allow them to easily enjoy and take in every bit of it.

Some might contradict this approach by claiming that the whole intention of the creator is destroyed since this version of the anime released after the ‘Fate/Stay’ series. But I feel that the ones who are not familiar with the visual novels will have a better time watching the anime if they are already not aware of the fate of their favorite characters. So it all just boils down to one thing – if you want to follow the creator’s perspective on the anime, which intends to hammer down a sense of intense tragedy and sorrow to the anime, then try watching ‘Fate/Stay’ first. But if you want a sense of unpredictability from the plot, then go for the order that we are recommending here in this article. 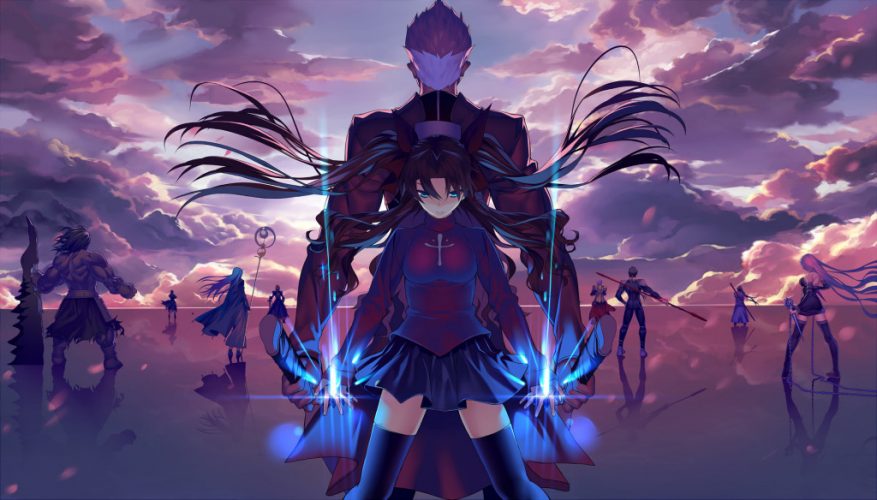 As I mentioned earlier, the game from which the anime has been adapted has 3 different timelines. A visual novel never really follows a linear pattern of storytelling and that gives it the advantage of portraying many different storylines at once. But unfortunately, an anime has to be linear with its storytelling and this is where most anime fail to be as good as the visual novels they have been adapted from, except for a few like ‘Steins;Gate‘. ‘Fate/Stay Night’ tries to take a well-rounded approach by involving bits of each timeline so that it is able to introduce the viewers to the Holy Grail War and at the same time, move the story in a linear understandable direction. Despite being an overall above-average anime, many still believed that ‘Fate/Stay’ was not really able to do full justice to its source material.

But if you go for ‘Fate/Zero’ first, then many character interactions will make a lot more sense. A lot of major plot twists of ‘Fate/Stay’ will become a bit more predictable if you go for ‘Fate/Zero’ before it. But contrary to that, the entire ending of ‘Fate/Zero’ is spoiled if you decide to watch ‘Fate/Stay’ first. So watching either of them first will worsen the experience of the other one in one way or the other. In the end, you get to choose which approach would suit you more.

Anyone who wishes to enhance the watching experience to a whole new level should definitely check out the visual novel as it takes a very balanced approach towards portraying all the main characters in the story; unlike the anime that focuses on one major character. But if visual novels is not your thing, then my advice would be to start off with ‘Fate/Zero’ to get a better understanding of all the characters involved in the story. 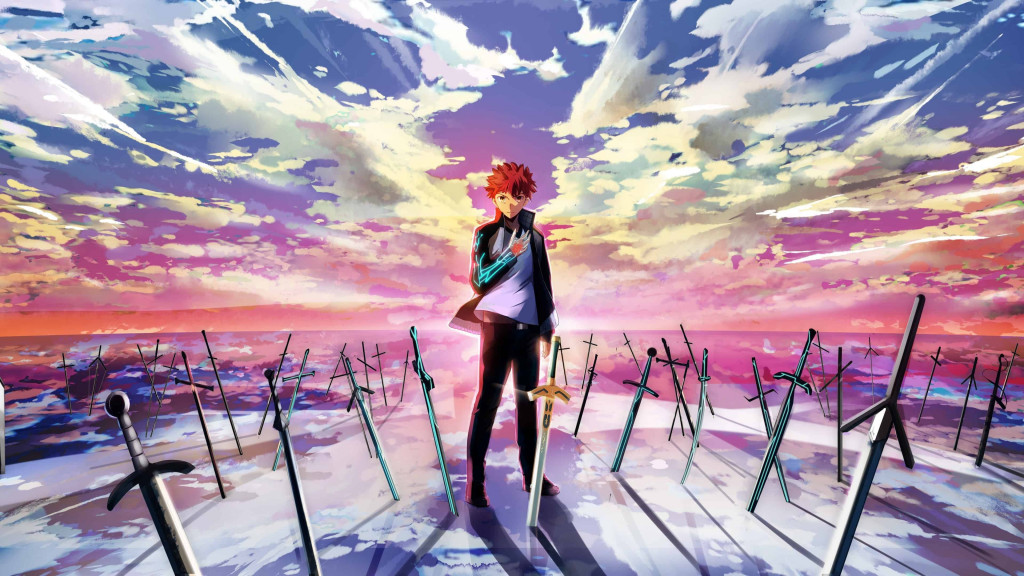 An anime movie and series, both go by the name of ‘Fate/Stay Night: Unlimited Blade Works‘. Both depict the second route of the visual novel series that not only focuses on the main protagonist Shiro but also emphasizes a lot more on Rin Tohsaka and Archer, her servant. Both the film and the series follow the exact same story but the difference between them is that the movie tries to cover as much ground as it can in 2 hours whereas the anime does the same in 20 hours with its 26 episodes. So for obvious reasons, if time is not an issue for you, watching the series would be a far more superior option. But if you just want to rush through this arc of the anime, then skip the series and stick to the film. 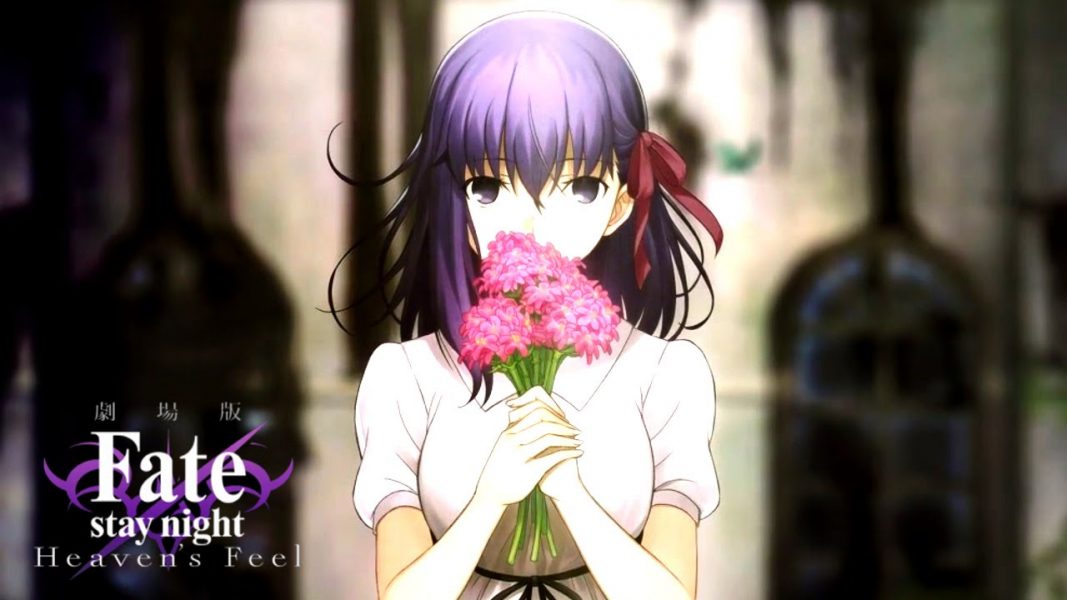 ‘Fate/Stay Night: Heaven’s Feel’ adapts the third and the final route of the visual novel. Instead of bringing in an entire series, the creators decided to make a movie trilogy to adapt this part, out of which two have already released and the third one is scheduled for the year 2020. When ‘Fate/Stay Night: Heaven’s Feel’ was first announced, fans were hoping that the creators would learn from all the mistakes they made in the previous installment and bring something much better to the table. Thankfully, the creators were listening and this last “route” of the anime is the best so far. And being a sequel to the ‘Fate/Zero’ series, which was known for having stunning animation quality, Studio ufotable manages to continue the legacy. ‘Fate/Zero’ did set a high bar for animation but surprisingly, ‘Heaven’s Feel’ exceeds that.

The entire ‘Fate/Stay Night: Heaven’s Feel’ started off with a bang but what’s even more impressive about it is that it gets even better with its second film. It goes deeper in exploring the characters and the story of the entire series and does so in a very humanistic way. And not to mention, it also portrays a highly anticipated sex scene in the best possible way. The expectations from the next movie in the series are extremely high and only time will tell if it will be able to further raise the bar for the anime or not. I can’t emphasize enough on the importance of being familiar with the visual novel before watching the anime. So just to make the end of the anime more impactful, go through the visual novels before the last installment is released next year. 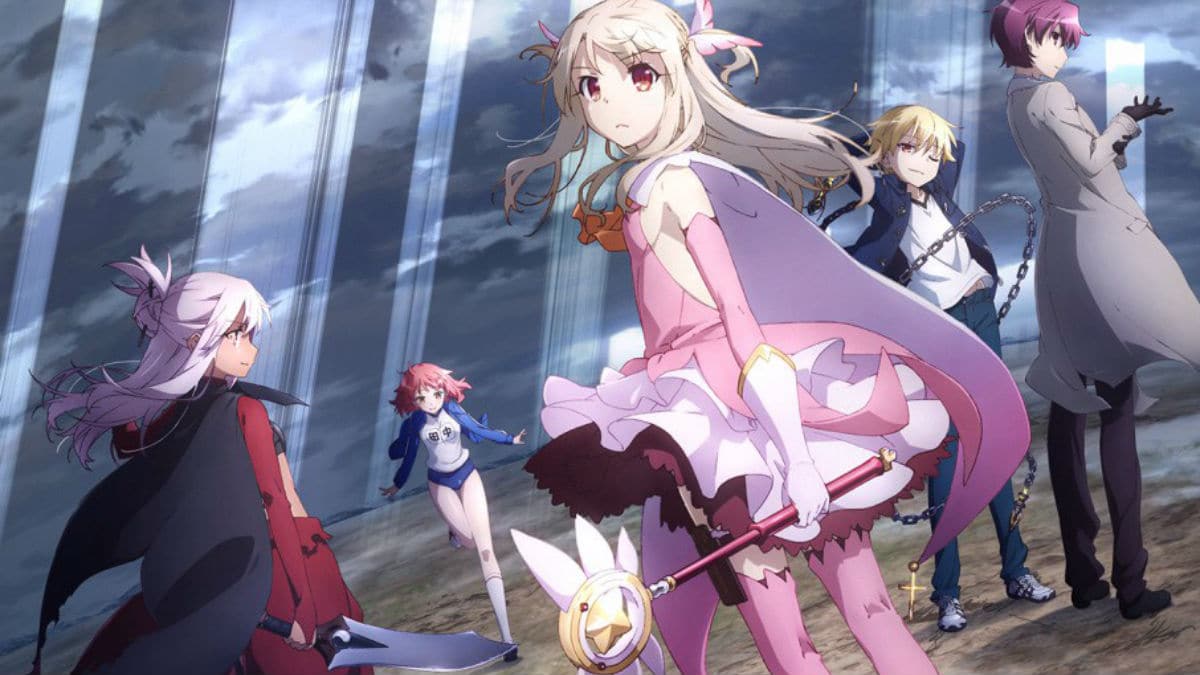 Like many other spin-offs and side story adaptations of the main anime, ‘Fate/kaleid liner PRISMA ILLYA’ is just another one on the list where Illya transforms into a magical girl and is assigned the task of collecting magical cards that are scattered all over the city. This version of the anime can be viewed anytime but it would be better to go for it after you’re done with the main series and you’re just looking for something more to fill your time.

Apart from this, there are other parallel universe adaptations like ‘Fate/Apocrypha‘ and ‘Fate/Extra Last Encore‘ that can again be viewed at any given order. These versions are not as good as the main series but can still be enjoyable if you’re familiar with a few characters. Also, these alternate versions have been produced by different studios, so don’t be surprised if you notice a variance in its animation compared to the main series. When it comes to ‘Fate/Apocrypha’, though it is set in an alternate universe and has an entirely different story that does not revolve around the Holy Grail, I would still recommend watching ‘Unlimited Blade Works’ right before it just to have a bit of an idea about what is going on.

At the end of the day, ‘Fate’ is a long-running franchise and there is absolutely nothing wrong with jumping right into one of its alternate stories just to get a small glimpse of its vast universe. It all comes down to enjoying the show to the fullest and not stressing over whether you’re watching it in the right order or not. So whatever approach you take towards watching it, just make sure that you’re entertained. Because frankly, that’s all that matters!