Cosmic Love: Where Are They Now? Who Are Still Together? 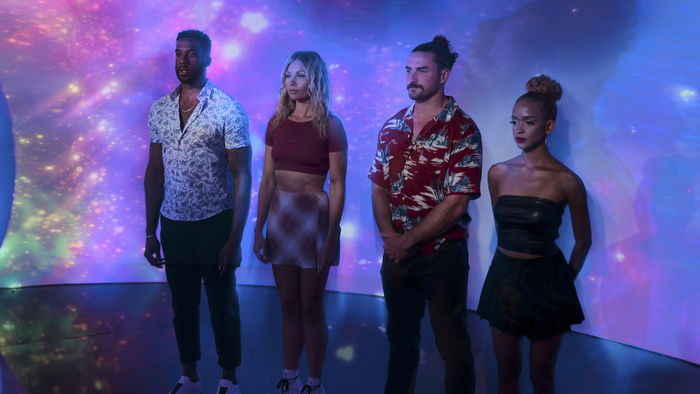 Amazon Prime’s ‘Cosmic Love‘ is an interesting dating reality show that revolves around four individuals or elements who are supposed to find their life partners from a group of sixteen single contestants. While the elements are allowed to form connections out of their own free will, they are guided in their journey by the “Astro Chamber,” which gives them advice and even reveals their perfect matches based on astrological charts.

However, mapping love has never been so easy, and it is interesting to see if astrology can indeed find each element their ideal partner. Season 1 of ‘Cosmic Love’ brought boatloads of drama and romance, mixed with surprise twists that kept the audience interested until the last episode. Nevertheless, with the cameras now turned away from the contestants, fans are intrigued to know their current whereabouts. Well, fret not because we come bearing answers!

Are Yana and Connor Still Together? 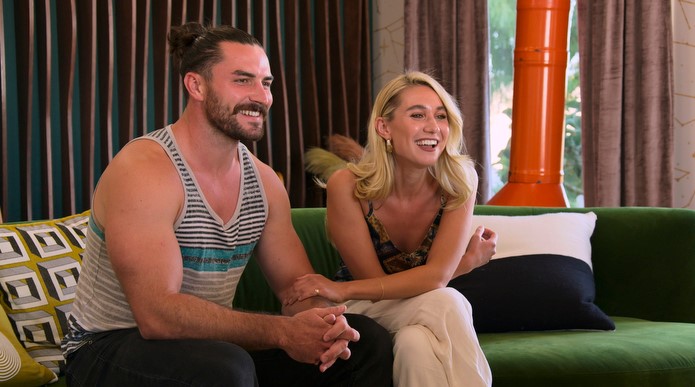 Connor Shennan explored quite a few connections on the show, yet he ultimately proposed to Yana Orlova, and the two got married in the last episode. Unfortunately, current developments make it seem like the two aren’t together as they rarely interact in public and have unfollowed each other on social media. Moreover, they appear to lead independent lives as Connor has returned to Phoenix, Arizona, where he earns a living as a wildland firefighter, whereas Yana is presently based out of New York City.

Are Chris Ragusa and Maria Still Together?

After exploring a host of connections, Maria Rodriguez finally settled on Chris Ragusa and accepted his marriage proposal. Despite the show documenting their beautiful wedding ceremony, we are inclined to believe that the two have since gone their separate ways. Apart from not featuring on social media together and not interacting much in public, Maria and Chris seemingly unfollowed each other on Instagram.

Chris currently resides in Connecticut, where he works as an industrial engineer and travels to Florida for his modeling gigs. On the other hand, Maria is a professional makeup artist based out of New York City.

Are Noel and Jazmin Potts Still Together? 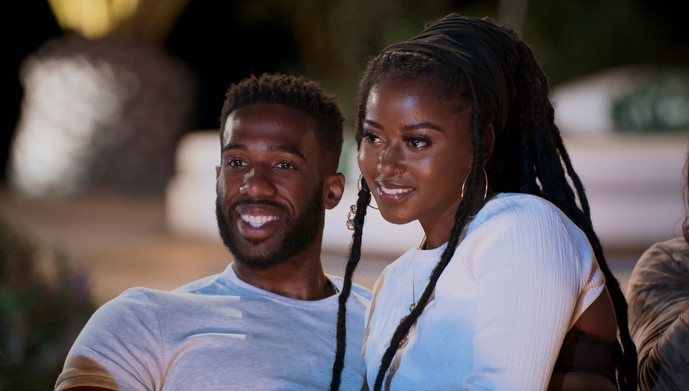 Interestingly, Jazmin Potts was Noel Allen’s first perfect match, and the two have been inseparable since then. Although he did give some thought to pursuing other connections, he kept coming back to her and eventually proposed to her, which led to their wedding. Well, viewers will be overjoyed to know that even if Noel and Jazmin don’t interact much in public, there are no reports of a possible breakup, and with the couple keeping in touch over social media, we believe that they are still together.

Incidentally, the former now lives in Tampa, where he works as a personal trainer and nutrition coach, and Jazmin is an Orlando-based stylist and hairdresser.

Are Theresa and Darren Still Together? 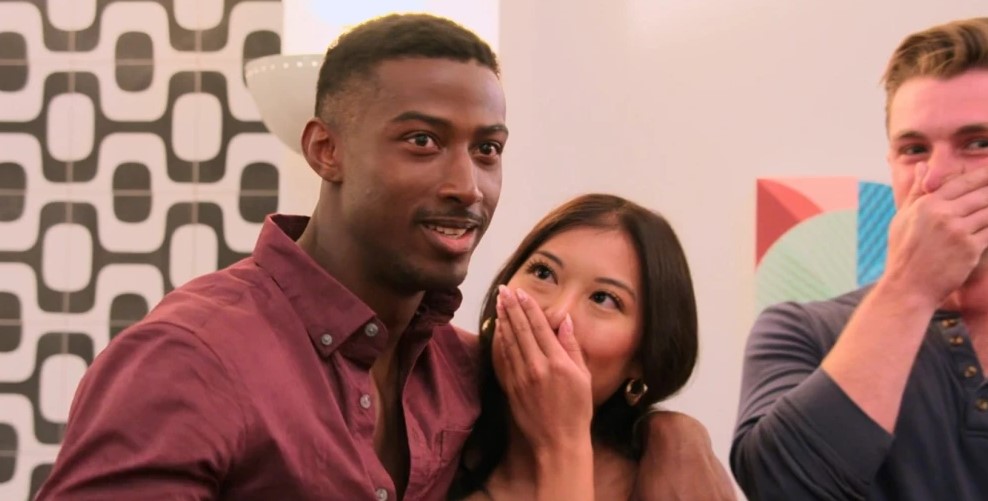 Interestingly, Theresa and Darren entered the show as perfect matches for different elements, but they soon realized they were perfect for each other. Thus, as their connection deepened, the two decided to get together and exit the show as a couple. Well, we are happy to report that current developments, along with their closeness on social media and the commitment they portrayed on the show, make us believe that Theresa and Darren are still together. However, they are seemingly in a long-distance relationship as Darren works as a realtor in Houston, Texas, while the latter is a Nashville-based social media manager.

Where Is Phoebe Davis Now?

One of the elements, Phoebe, came to the show intending to find a husband. However, even though she made headway with a few of her matches, things went south at the last moment, and the reality star decided that she needed to work on herself before getting married. Interestingly, once filming wrapped, Phoebe returned to San Diego, where she owns and operates a marketing business. Furthermore, she has been making waves in the entertainment industry as an actress and a model.

Unfortunately, from the looks of it, there is an absence of a special someone in her life, indicating that Phoebe is still single. Nevertheless, she made quite a few lifelong connections during her stint in ‘Cosmic Love’ and is currently enjoying a life surrounded by family and friends.

Where Is Adrianna Raphaela Now?

Once filming wrapped, Adrianna returned to Boca Raton, Florida, and now seemingly enjoys a life surrounded by her loved ones. Moreover, she appears single and works as a successful molecular biologist. On top of it, the reality star has made her mark in modeling and acting and even runs her own swimwear store, Tres Angeles Swim.

Where is Ana Miranda Now?

A current resident of San Diego, Ana returned to her profession as a bottle service waitress and bartender once filming got over. Although she does appear to be currently single, the reality star loves to lead an active life and often shares the memories she makes on social media.

Where Is Caleb McDonnell Now?

A native of Ireland, Caleb currently resides in Delray Beach, Florida, where he works as a real estate agent. Unfortunately, he exited the show alone and still appears to be single but is completely focused on taking his career to new heights.

Where Is Christopher J. Essex Now?

Interestingly, Chris Essex seemed to have a promising connection with Maria until she eliminated him in favor of Chris Ragusa. Once filming wrapped, Chris E. settled back into his everyday life in Nashville, Texas, and has made a name for himself as a country music artist. In fact, the reality star recently launched his new single, ‘Lie With Me,’ which was received well by fans.

Where Is Christopher Jones Now?

Christopher Jones, aka CJ, also fancied his chances once matched with Maria Rodriguez. She found him quite fun to hang out with, albeit she saw him more as a friend than a romantic connection and moved ahead with Chris Ragusa. At present, CJ seems to shuttle between New York and California while being a law student at the Carey Law School, University of Pennsylvania, from where he will graduate in 2025.

Where Is Danae DeSpain Now?

Danae built a close connection with Connor on the show, yet the latter ultimately eliminated her and chose to explore a relationship with Yana. Thus, Danae returned to her hometown of Bend, Oregon, after filming ended and seems to be enjoying a life surrounded by her loved ones. Interestingly, she is also quite into travel, and reports claim that the reality star is trying to set up her own lifestyle brand.

Where Is David Christopher Now?

Sadly, David failed to find his match on ‘Cosmic Love,’ yet he seems to have a lot going on for himself at this very moment. For starters, the Los Angeles resident operates as the CEO of his streaming network, Fit TV Network, which primarily focuses on fitness programs. Additionally, David has taken up professional music and acting as a passion while offering his fitness training services.

Where Is Jasmine Rodulfo Now?

One of the first to be eliminated from the show, Jasmine Rodulfo, presently resides in Dallas, Texas, where she earns a living as a social media marketer. Although the lack of a romantic someone in her life indicates her single status, Jasmine is wholly focused on her career and living a life surrounded by her loved ones.

Where Is Javier McIntosh Now?

When Javier missed out on finding his true love on the dating reality show, he returned to Atlanta, Georgia, once production wrapped. The reality star, who currently appears to be single, earns his living as a film director and has even co-founded the production studio McIntosh Bros Productions and MVMT TV, which offers over 50 free channels related to Black Entertainment.

Where Is Morgan Raphael Now?

An alumnus of Penn State University, Morgan currently resides in the Greater Chicago Area, where she runs her wellness blog, Bun Undone. While she started her blog in 2017, she grew her business over the years and has also penned down a self-care guide and a self-care e-book, ‘Self-Care Society.’ Besides, Morgan seems single at present and is living the best days of her life.

Where Is Phillip Newhard Now?

Although Phillip was ready to risk it all for Phoebe, the latter rejected him and realized that she needed to work on herself before getting into a relationship. Thus, once filming ended, he settled back into his everyday life and currently shuttles between New York City and Cape Cod. The reality star earns a living as a real estate investor and, from the looks of it, has been leading an independent but happy life.