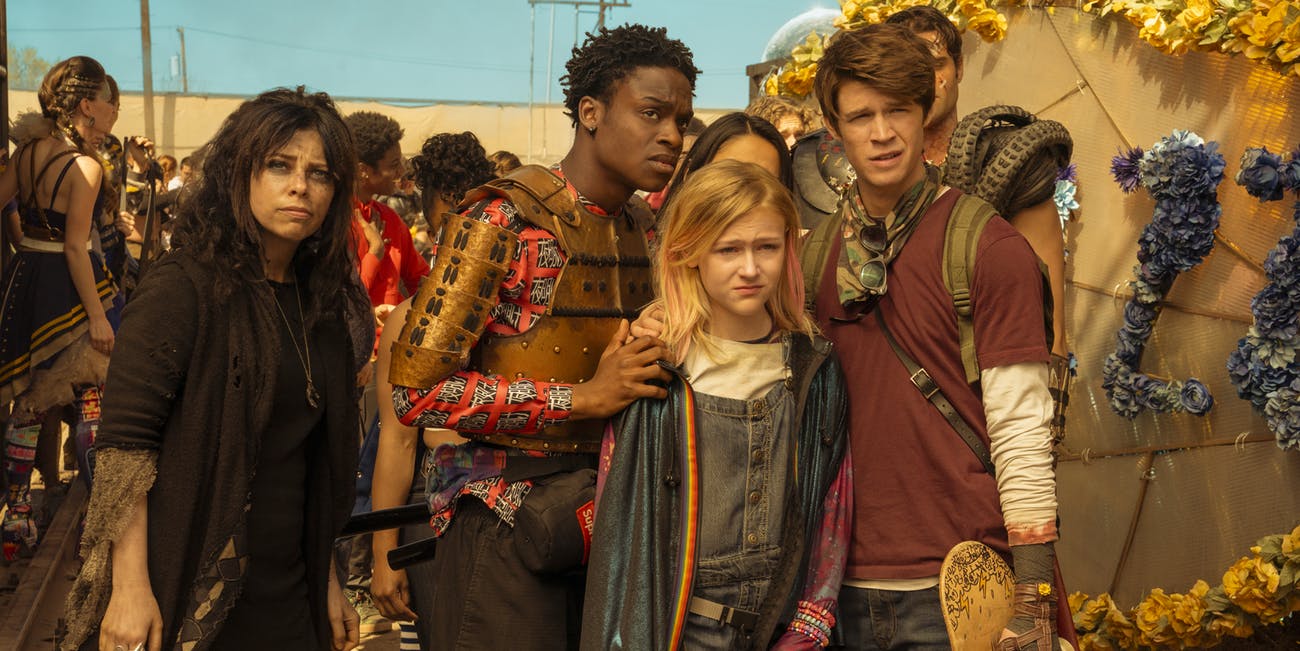 If there is one thing Netflix has understood over the course of its streaming reign, it is the potential of the teenage audience. It might have begun its original series streak with ‘House of Cards’, and yes, it continues to produce super-quality content for adults, with shows like ‘Mindhunter’ and whatnot. But the true focus lies on teenagers.

Over the course of past years, there has been an extreme surge in the teen dramas released by Netflix. Television networks like CW had already been at it- their target audience has always been young adults and some of their most popular shows owe it to the dedicated fanbase of high schoolers. But even they hadn’t been as efficient with pulling out one teen drama after another. This year itself, Netflix has brought out a great bunch of teen series and movies, and some of them are even good enough to be considered for an adult audience. But all this fuss of quantity has cost Netflix on the front of quality.

‘Daybreak’ is the merger of two of the most popular genres of this time- teen comedy and the post-apocalyptic world. A nuclear blast results in the death of all of the adults on Earth. If not that, then they are turned into mindless zombies; broken radios who are stuck on their own last conscious thought. The kids, on the other hand, are ruling the world. Literally. Take the town of Glendale, for example. Six months into the apocalypse and it is already divided into factions, with everyone into an agreement to not cross each other’s boundaries. If you need a simpler analogy, then Glendale has turned into a high school. The cheerleaders have their own squads, the athletes are running their own show, the geeks are still scared and wanting to rise to the top, and Josh is still a loner.

Before the zombies became a real thing, he had been in a relationship with Sam, the perfect and most popular girl in the school. But the event separated them, and now she is the only thing keeping Josh going. He needs to find her, and that’s all that he cares about. Of course, he finds other people along the way, forges strong friendships with the kids he wouldn’t befriend normally and survives some hits and misses along the way. All in all, it is a bumpy ride for the protagonist. Normally, this means a cosy binge for the viewer. A story with all sorts of hurdles for the protagonist who needs to rise up to the occasion, be a leader, get the girl, save the world, and also come out as a better person on the other side? Count us in, right! Well, for ‘Daybreak’. Not really.

This show has some really good things that will be appreciated by a section of the audience. It is chock-full of pop culture references, from ‘Game of Thrones’ to ‘Star Wars’ to ‘Mad Max’ and even samurais. Especially, samurais. It is great for the people who pride themselves for being the keeper of this knowledge. There is also a good narrative structure where the task of breaking the fourth wall is handed over from one character to another, so we get a better insight into their lives before the apocalypse, who they really are and what their true potential is.

Then there are the cultural and political currents, which aren’t presented with much subtlety or sophistication. But the kids are right; the adults have fucked up the world and left nothing for them. So, I guess, we are not the ones to judge them on “sophistication”. There’s a faint hint of power-grabbing, shifting ideologies, feminism, and a lot of other things that the writers have tried to add between the layers. But all of this doesn’t matter if the writing doesn’t support it.

No amount of pop references and no measure of toying with dark humour can get your point across if the plot is inconsistent. And that is the biggest problem with ‘Daybreak’. It doesn’t have a sense of direction. We know the endgame: the boy wants to get the girl back. But everything in between is so messy and exhausting that it is hard to keep yourself going with the next episode. Despite all the relevant themes of the story, it seems hollow from the inside. There isn’t much you can take away from it. The characters, even though they are acted well, don’t manage to make much of an impression. They are forgettable; you don’t feel connected to any of them, not even the protagonist, none of his sidekicks.

Even though the show has good visuals — the yellow taint of the world in shambles — it lacks the necessary charm to make it worth your while. For once, I would allow myself to believe that I don’t get it because I am an adult. I am not the target audience. But then, this isn’t the first time Netflix is releasing a teen drama. ‘Daybreak’ doesn’t have the depth of ‘The Society’, or the allure of ‘Sex Education’ or the darkness of ‘The End of the F***ing World’ or the gravity of ‘13 Reasons Why’ (Season 1!). Teenagers already have loads of better-quality content at their disposal, so why should they spend time with the one that doesn’t live up to the standard?