Review: Dead to Me Season 2 Episode 1

The last time we saw Judy and Jen, they had been staring at Steve’s dead body floating in the pool. It looked like the time to set aside their differences and be there for each other. It was the event that would throw them back together, as they try to figure out how to dispose of the body and keep the murder a secret. But, as expected, things are not so simple. Jen might have trusted Judy with burying the body, but there are a lot of things that she is hiding from her. The tables have turned around, and what remains to be seen is for how long Jen can keep her secrets, and most importantly, what are they?

Dead to Me Season 2 Episode 1 Recap

After Steve’s death, we find Jen and Judy in the kitchen the next morning, cleaning up stuff. The swimming pool is covered, and it seems like Steve might still be in the backyard. After thanking Judy for showing up, Jen asks her to leave once again. She still hasn’t forgiven her for lying to her and for being responsible for Ted’s death. As both of them try to deal with their feelings about the event, an unexpected thing comes knocking at their door.

Dead to Me Season 2 Episode 1 Review 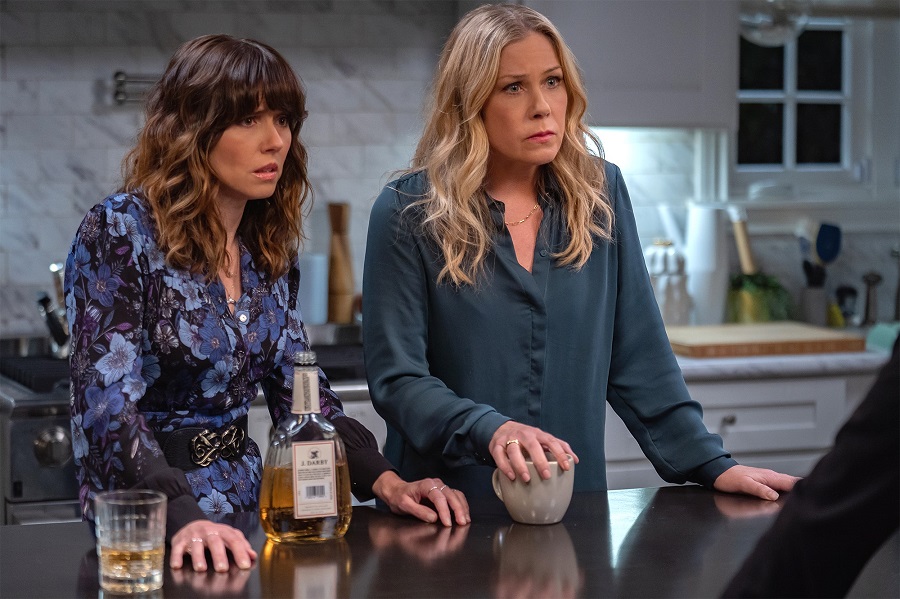 ‘Dead to Me’ returns with another blood-stained season for Jen and Judy. This time, however, it flips their situations. The last time, Judy had tried to keep the secret about Ted’s death from Jen. Her involvement in the hit-and-run had become clear early on, but the show played with the exact nature of events. How guilty was Judy? How long would it take for her to come clean to Jen, and what would happen when she finally does?

The same questions linger this time around as well, but the person in question is Jen. While we know that Steve is dead for sure (we saw the dead body), we didn’t exactly see Jen killing him. And even if she did it, there is a lot more to the story. Her guilt towards Judy shows that Steve’s death was not just self-defense. Just as the previous season, ‘Dead to Me’ has made it clear that there are a lot of tricks up its sleeve and that the viewers should prepare themselves for another season full of twists and turns that they never saw coming. If you need any proof of this, the ending of the first episode makes it clear enough.

Christina Applegate and Linda Cardellini’s incredible chemistry once again lights up the screen, and they recreate the vastly different portraits of Jen and Judy. Applegate’s deadpan humor is still intact, with the looks of caution and moments of vulnerability thrown in for her role. In the last season, she was outside the secret that had destroyed her life. But now that she is on the inside, Jen’s character demands more range of emotions and reactions, and it would be interesting to see it through the lens of her humor and sarcasm.

Cardellini keeps Judy as fragile, and yet dependable, as she had been in the last season. She is still wrestling with the guilt of killing Ted, which is why she finds it easier to forgive Jen for what happened with Steve, for now, at least. A good-hearted woman, Judy has always been the one who blames herself for whatever bad things happen around her. It is one of the reasons why we feel more sympathetic towards her, and Cardellini’s performance makes us lean in her favor. How will that figure into the equation when the truth comes out?

‘You Know What You Did’ throws one curveball after another to convince the audience that the second season is even better than the first; at least, that’s what it feels like right now. You are compelled to stick around and find out what happens next. Hopefully, the season will maintain this curiosity throughout.