Created by Alena Smith for Apple TV+, ‘Dickinson’ is a comedy-drama that focuses on the personal, artistic, and social life of Emily Dickinson. By exploring feminist ideas, cynical humor, and queer identities, the show combines fact and fiction to challenge the belief that Emily was a morbid, melancholic, and introverted individual. Set in Amherst of the 19th Century, the show touches upon important themes of gender, race, and politics.

In season 3, we see how Emily struggles to figure out the purpose of her poetry as the Civil War tears her country apart. Meanwhile, interpersonal battles and familial drama too rear their heads in the Dickinson household. On the other hand, Henry has left Amherst and is traveling South. So, how does it all turn out? Here’s everything you need to know about the recap and ending of ‘Dickinson’ season 3. SPOILERS AHEAD.

The season opens with a voiceover explaining that although Emily Dickinson is not remembered as a war poet due to her secluded lifestyle, it is a fact that the American Civil War was the most productive time for her poetry. Then, we see the Dickinsons attending Aunt Lavinia’s funeral in Boston. We find out that Sue is pregnant and that Austin has become an alcoholic.

When Austin accuses his father of crushing his children’s dreams, Edward has a small heart attack; he soon recovers, but his son “secedes” from the family. On the other hand, Austin is having an affair with Jane Humphreys. However, Jane gets remarried and moves away to Vietnam with her son and new husband. Austin sinks deeper into alcoholism and Sue finally gives birth to their son. Then, Frazar Stearns leaves to fight in the war and Emily reads him a poem before he departs.

Vinnie despairs over all the lovers she has lost in the war and her mother gets angry at Sue for not letting her spend time with her grandson. Then, we see Henry arriving at a camp in South Carolina. In Amherst, George gives Emily the latest issue of ‘The Atlantic.’ He shows her a letter from the writer, abolitionist, and soldier Thomas Wentworth Higginson that gives advice to poets. We realize that Henry is going to meet Higginson, the leader of the Union’s first regiment of Black soldiers. 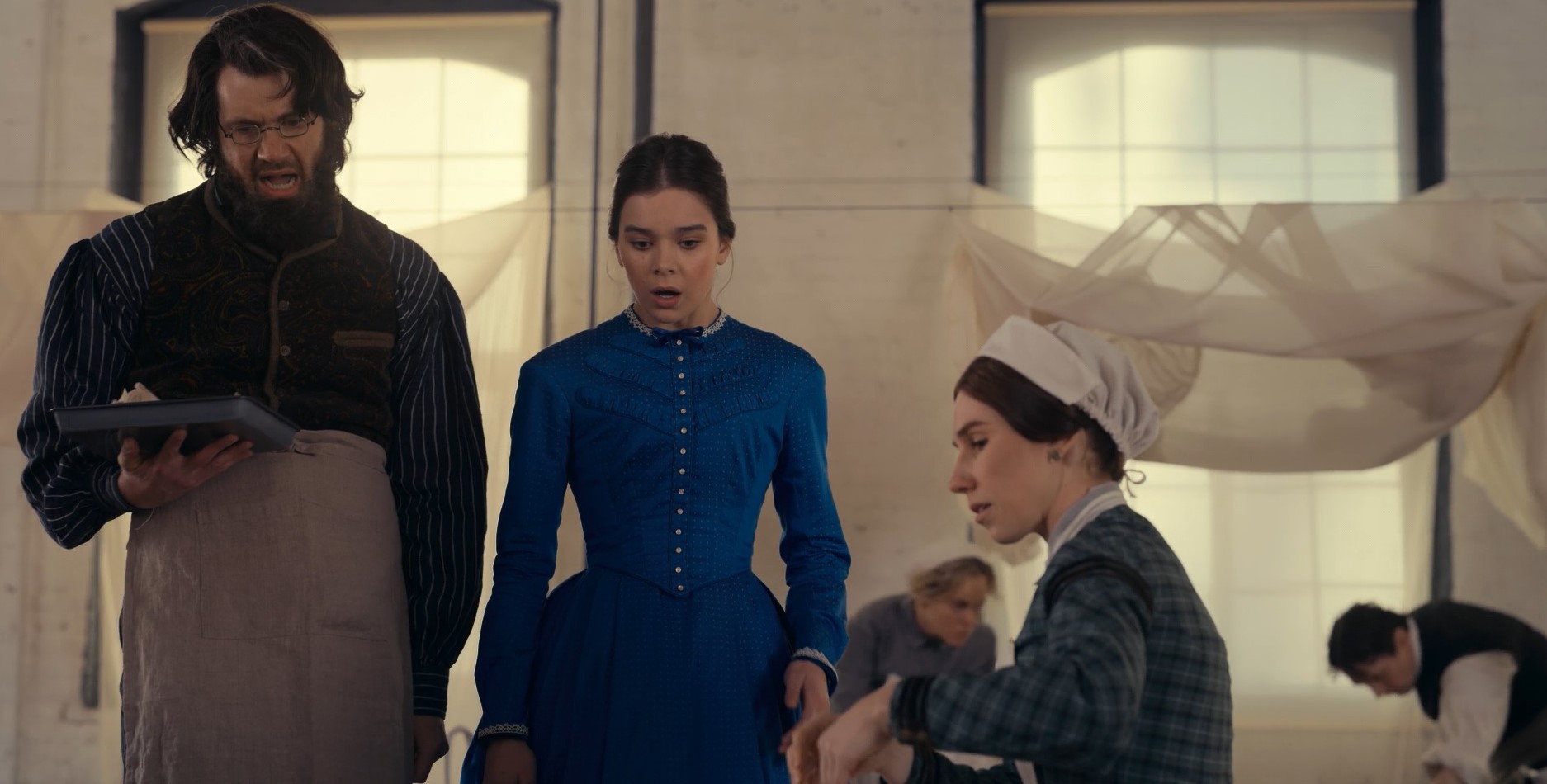 Soon, we see Emily sending a letter to Higginson, asking him if her “verse is alive.” Then, Emily goes to meet Walt Whitman in New York. Whitman takes her to a gay bar called Pfaff’s and asks her to stop worrying about her poetry; he tells her to get out of her mind and into her body. Thus, Emily comes out and confesses that she’s in love with Sue.

The town soon becomes cold towards Edward because he is in touch with his confederate brother in Georgia. Ithamar Conkey tells him that he must choose a political side. Austin, meanwhile, decides to start his own law firm and asks Sue for a divorce. Later, Sue finds Emily’s letter to Higginson and feels betrayed.

After the Dickinsons visit a lunatic asylum, Emily’s mother starts worrying about her role as a mother and a wife. Edward seems to finally embrace Emily’s rebellious personality, especially after she frees a bunch of women confined in the asylum. Emily, having taken her father’s side over her brother’s, finally feels accepted. Later, Emily’s mother decides to sleep until the war ends as she is overwhelmed by her domestic duties and misses the simplicity of her childhood.

Meanwhile, Sojourner Truth asks Betty to start dating again as she has still not received any letters from Henry. However, Betty soon finds out that Henry is fighting in the South; she feels hurt because he didn’t tell her and is probably going to perish and leave their daughter, Helen, all alone. Then, Sue and Emily have an argument over Emily’s obsession with poetry and tendency to ignore her lover at times. In a bizarre event, Emily and Vinnie go forward in time to the year 1955 and meet Sylvia Plath. Emily finds out that her country thinks that she’s a recluse but a great poet. However, the incident makes Emily and Vinnie grow closer than ever. Emily also continues to communicate with Death occasionally. 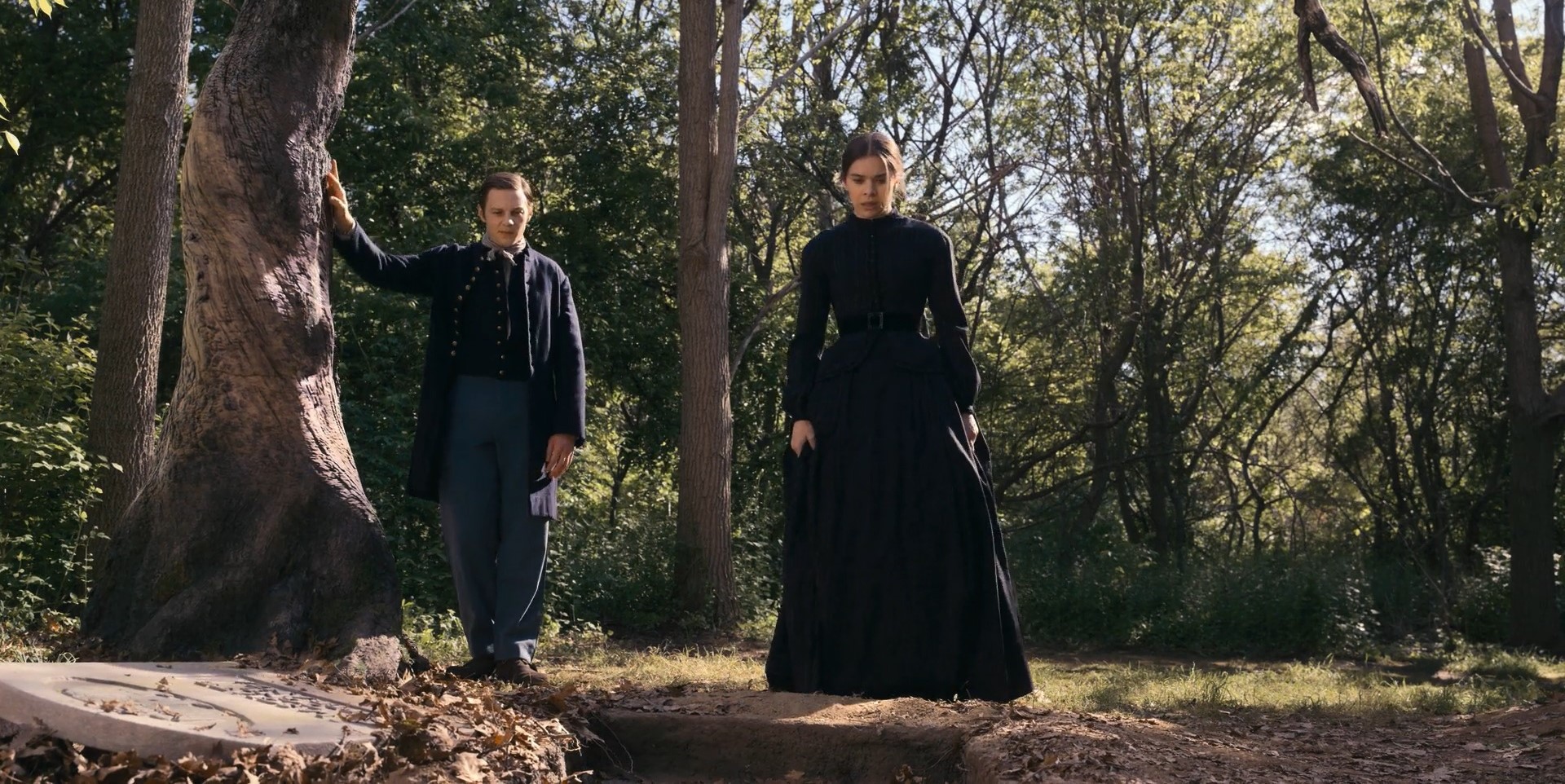 We are then informed that Frazar Stearns has died in battle, just as Emily’s visions had told her. Emily attends Frazar’s funeral and later talks to a vision of him. Later, Edward asks Emily to be the executor of her will. However, he says that he’ll be leaving all of his possessions to Austin as women are too emotional and weak to be given such responsibilities. Thus, a hurt Emily tells Austin that he was right about their father. Later, thanks to Frazar, Emily encounters her own personal version of hell.

Dickinson Season 3 Ending: Does Thomas Wentworth Higginson Finally Meet Emily? Why Does Emily Refuse to Come Out of Her Room?

Soon, Emily helps her mother to get closure over her sister Lavinia’s death. Conkey offers Edward a chance to redeem himself by joining the Massachusetts Republican Party; when Edward, uninterested in politics, refuses, Conkey calls him a “Whig coward.” Meanwhile, Austin and his friends throw a farewell party for George, since he has been drafted. There, Emily discovers that Sue sent one of her poems to the Drum Beat, Abraham Lincoln’s favorite newspaper.

In the finale, Higginson finally arrives at Amherst to meet the young poet who has kept him inspired throughout the war. He goes to the Dickinson household and is immediately pampered by Emily’s family. As Austin, Sue, Vinnie, Edward, Emily’s mother, and Maggie tell Higginson about the eccentric genius Emily is, our protagonist stays locked up in her room upstairs.

Although Emily finishes designing her white dress with Betty in her room, she refuses to go down to meet Higginson. Maggie even calls her a catfish when Emily explains that she didn’t describe herself accurately in her letters. Soon, though, it becomes obvious that Emily doesn’t wish to meet Higginson because she is finally sure about her poetry and its purpose. Also, she’s distracted by her white dress and is too nervous to meet a stranger.

Throughout the season, we see Emily worrying about whether her poetry is relevant. After she writes to Higginson, she feels a sense of relief because the older man tells her that her words give “the impression of a wholly new and original poetry.” Thus, thanks to him, she begins to believe in her poetry.

The fact that Emily finally refuses to meet Higginson in the finale highlights that she no longer requires his feedback to feel good about her poetry. Plus, it marks her tendency to avoid strangers. Additionally, Emily never indicated that she wishes to meet Higginson in person; it is Higginson who assumes that the younger poet won’t have any problems talking to him in real life.

However, it is possible that Emily will meet him in the future. According to historical records, Emily, at the age of 39, did meet Higginson in 1870. Emily also asks Maggie to tell Higginson to “come back another day.” In the final scenes of the season, an older Emily takes her Newfoundland dog to the beach. There, she rows out to meet the mermaids of her imagination. Thus, we know that Emily’s true love is her poetry and that she doesn’t doubt its importance anymore. Clearly, she doesn’t need people when her mind alone is fantastic enough to create a new world based on her real one.

Do Emily and Sue End Up Together? Do Austin and Sue Get Divorced or Fix Their Problems? Does Austin Reconcile With Edward, his father?

Throughout the season, Emily and Sue struggle because the latter is married to the former’s brother and it is not socially acceptable to be queer. Additionally, Emily’s poetry becomes an issue, because Sue feels as though she is nothing but her muse who can’t actually get close to her.

After Sue gives birth, the two lovers become even more distant because they have different views on motherhood. Meanwhile, Austin and Sue start facing problems because of the former’s alcoholism and the latter’s history of infidelity (in season 2). Austin even doubts whether the baby is his, and Sue believes that he cannot be a good father. However, once Austin stops drinking and reveals that he avoided going to war because he actually wants to be there in person to raise his son, Sue realizes that Austin will be an unconventionally good father.

Thus, Austin and Sue do not get divorced, settle comfortably into their domestic life, and even accept the former’s two orphaned cousins. Austin seemingly forgives his father as well and asks him to help him fight the legal battle for Angeline Palmer, a freeborn woman whose brothers got arrested because they tried to save her from being sold into slavery. Although Edward is hesitant, Austin tells him that the Dickinsons should stand for what’s right; his father agrees and accepts the notion that it’s time for things to change. Austin and Sue also name their baby Edward, honoring the Dickinson patriarch. 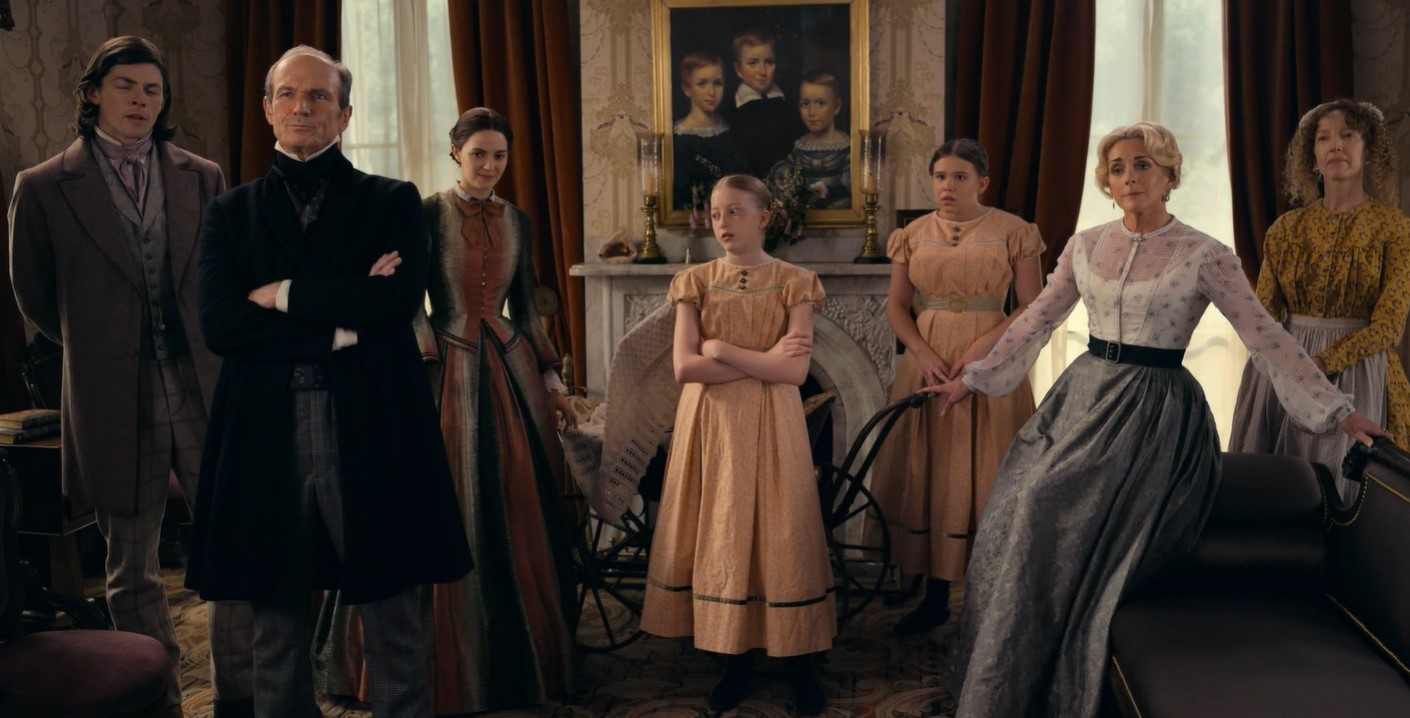 Emily and Sue make love in episode 9 after the latter anonymously gets the former’s poem published; it’s apparent that they are still in love. Although not together in the traditional sense of the word, it is obvious that the two women will continue to be with each other in secret. Sue has accepted Emily and her overwhelming poetry, and Emily confesses that all her words are for her best friend and lover. Thus, the women will probably try to make the best out of their unconventional situation. Since everyone assumes that they are just friends, it won’t be too hard for Emily and Sue to hide their romance.

Do Henry and the Black Union Soldiers Survive? Do They Win? Does Henry Finally Write to Betty?

Throughout the season, as Emily sees visions of soldiers at war, we witness Henry going to Beaufort, South Carolina, to join the first Black Union regiment. Higginson gives him the task of making the soldiers literate, but soon Henry realizes that they have bigger issues. Although they are soldiers, the Black men are not given proper uniforms or guns because they have to wait for Lincoln to sign the Emancipation Proclamation. It’s obvious that whilst some white leaders are abolitionists, they are also afraid of arming freed Black men.

Thus, Henry helps them fix their uniforms and even assists them in stealing weapons so that they can fight. He lets Higginson know that they have no choice but to illegally acquire firearms as the colonel seems to be too scared to actually help the Black Union soldiers by going over his superiors. Higginson, ashamed, agrees to look the other way.

In episode 8, we see Henry and his soldiers fighting against the Confederates. Henry gets injured but soon the Union soldiers overpower their enemies. In episode 9, Higginson congratulates his soldiers for winning the “skirmish” and declares that he’s taking a sabbatical. He makes Henry the sergeant in his stead. It’s apparent that Higginson knows that he is not worthy of being the Black soldiers’ leader. Thus, Henry and the Black Union soldiers not only survive but also win their small but important battle. 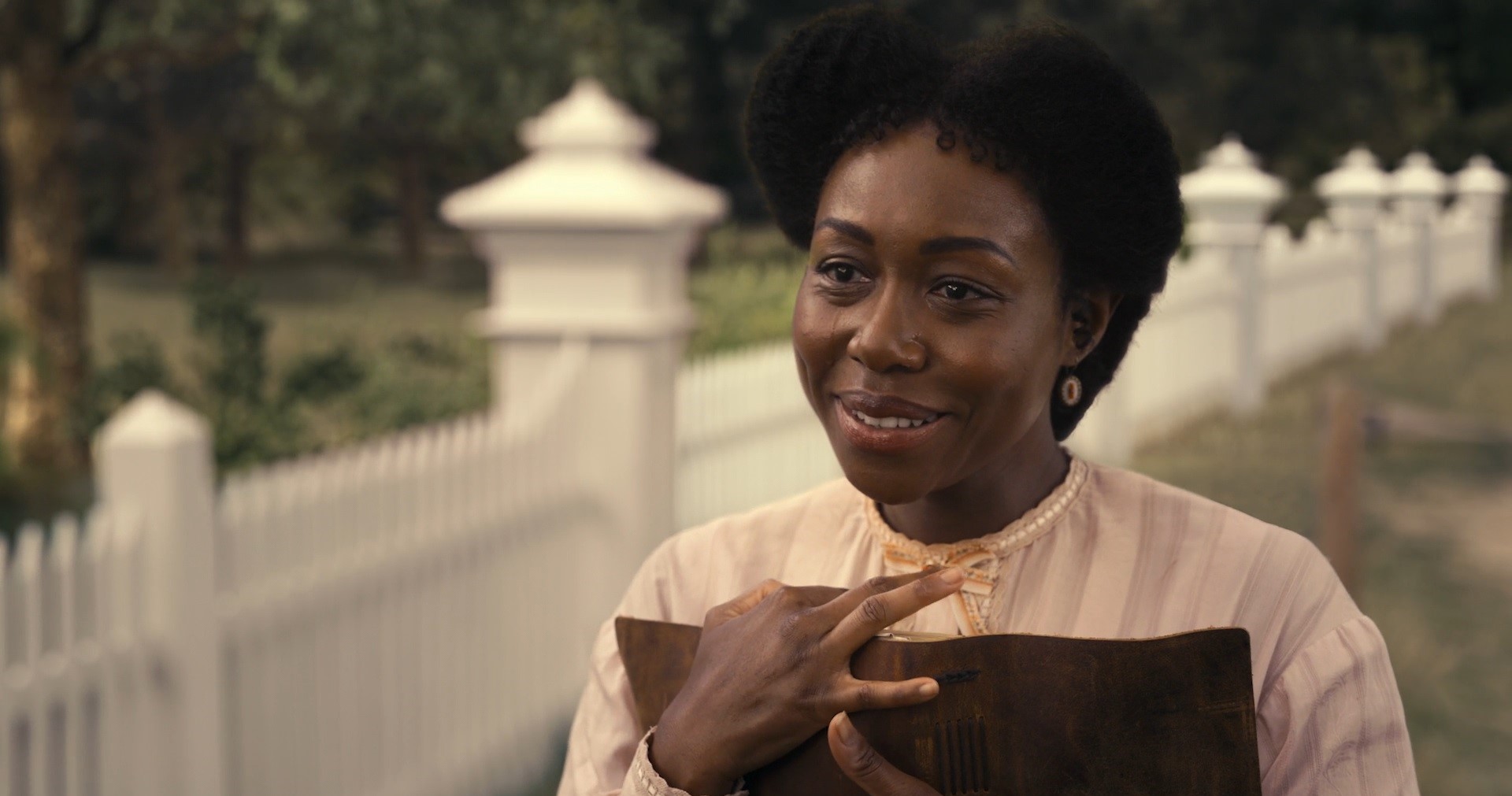 In the finale, when Higginson comes to Amherst, he hands over all of Henry’s letters to Betty, who cries when she finds out that he’s alive. We realize that Henry had been writing the entire time but wasn’t sending letters because he thought he wouldn’t survive; he didn’t want to leave Betty and his daughter Helen with painful reminders of himself. However, now that things are looking up even though the war is not over, Henry has reached out to Betty with all of his love and words. Having successfully used his actions in war, Henry — who is a writer, after all — resorts back to his words.