Do Hopper and Joyce End Up Together in Stranger Things? 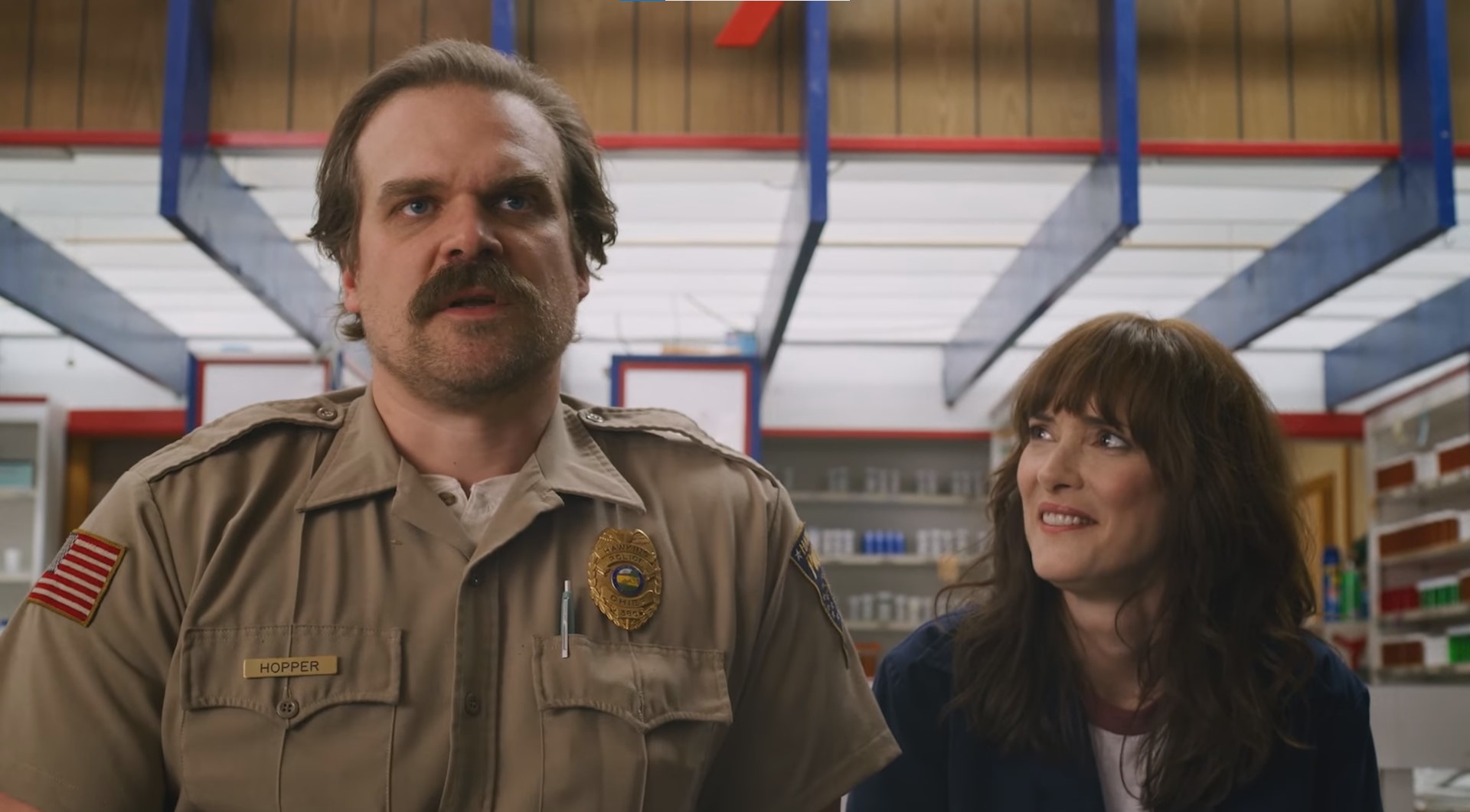 Netflix’s ‘Stranger Things’ is a coming-of-age sci-fi series set in the 1980s. The show predominantly revolves around a group of teenagers as they take on other-worldly monsters, first love, and calculus. Joyce Byers (Winona Ryder) and Jim Hopper (David Harbour) are two of the older characters of the series. They have known each other since they were in high school, though their lives forked apart. In 1983, Joyce reaches out to Hopper after her son Will goes missing. Things between the two of them begin to develop from there. After Hopper becomes Eleven’s adoptive father, she guides him through all the trials and tribulations of parenthood. It is heavily implied that Hopper and Joyce have romantic feelings for each other. If you are wondering whether Hopper and Joyce will end up together in ‘Stranger Things,’ we got you covered. SPOILERS AHEAD.

Do Hopper and Joyce End Up Together?

Both Hopper and Joyce attended Hawkins High School in the late 1950s. They were quite close, often playing hooky and smoking cigarettes. One time, they were even caught by one of the teachers, and all they could do then was run away. Eventually, Hopper enlisted in the army and served in the Vietnam War. After returning to America, he became involved in a relationship with a woman named Diane. They had a daughter together, Sara. After Hopper and Diane married, the family of three moved to New York City, where Hopper became a police officer. However, his daughter died of cancer, and his marriage fell apart, prompting him to return to Hawkins and become the local sheriff. Meanwhile, Joyce married a man named Lonnie Byers and had Jonathan and Will. Even if there was love at one point between Joyce and Lonnie, the marriage ended in divorce.

Hopper and Joyce’s relationship has been complicated from the beginning. Although it is quite evident that they have feelings for each other, they appear to be too afraid to act on them. However, the bizarre circumstances they find themselves in because of their children bring them inevitably closer. In season 1 episode 8, titled ‘The Upside Down,’ Hopper saves Will’s life, and it changes the dynamic between Hopper and Joyce for the better. 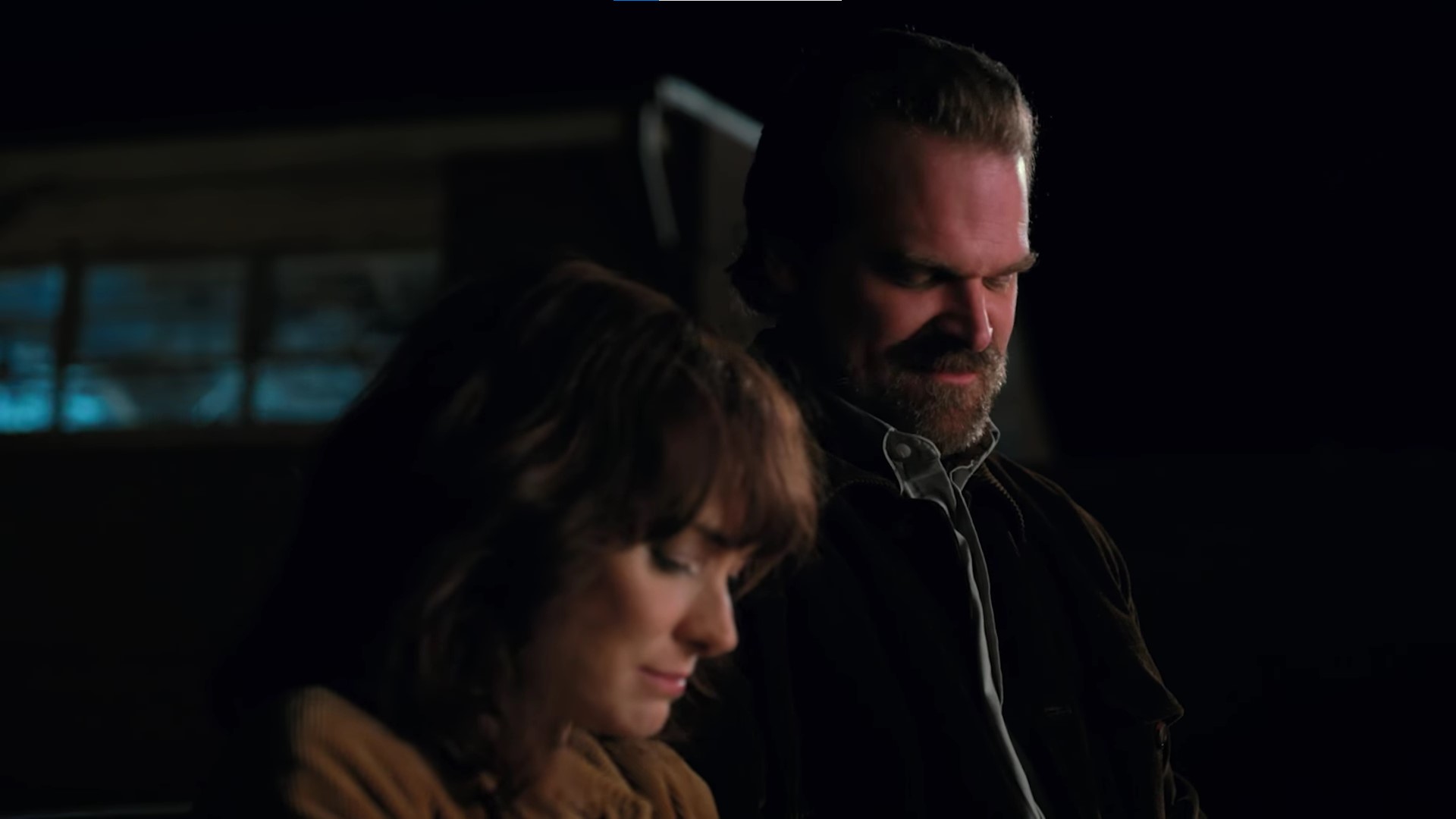 In season 2, Joyce dates her and Hopper’s former schoolmate Bob Newby, much to Hopper’s irritation. In season 3 episode 7, titled ‘The Bite,’ an exasperated Murray Bauman tells Joyce and Hopper to just have sex and be done with it. In the third season finale, titled ‘The Battle of Starcourt,’ Joyce comes to think that Hopper died in an explosion. In reality, he has ended up in Russia. In season 4 volume 1, Hopper is stuck in a Russian prison. Joyce and Murray learn that he is alive and embark on a journey to set him free. Hopper and Joyce eventually reunite in the mid-season finale, titled ‘The Massacre at Hawkins Lab.’

Like almost every other relationship in the show, the one between Joyce and Hopper is constantly evolving. When it is believed Hopper is dead, Joyce becomes the parental figure in Eleven’s life. If Hopper and Joyce survive the Upside Down and its monsters, they just might end up together.

Read More: Do Eleven and Mike End Up Together in Stranger Things?