Do KJ and Mac End up Together in Paper Girls? 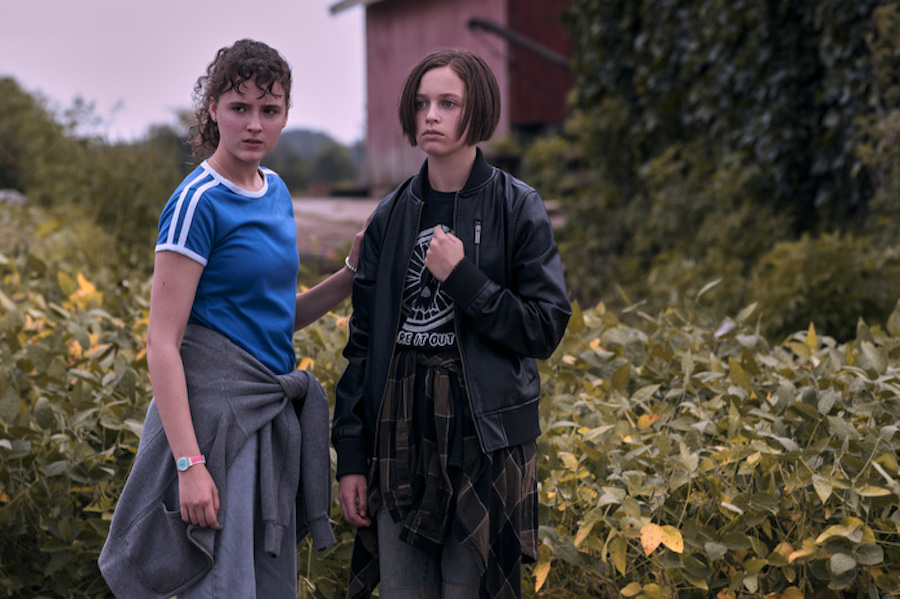 Amazon Prime’s ‘Paper Girls’ follows the story of four twelve-year-old girls who travel in time and land in the midst of a raging war between two factions. The show not only focuses on the science fiction aspect but also gives a lot of space for its characters to grow and explore their identities, especially as they meet their future selves. Interesting dynamics develop between the girls, with each of them learning new things about the other. The ones that seem to hate each other in the beginning turn out to become each other’s most trusted confidants. Something similar happens with KJ and Mac. They have sparkling chemistry, right from the start, which makes one wonder what the future holds for them. Will they end up together? Here’s what you should know. SPOILERS AHEAD

Will KJ and Mac End Up Together?

‘Paper Girls’ establishes the nature of its characters pretty early on. Even from the first interaction between the four girls, it is easy to read the dynamics between them. Erin stands out as the new girl, the outsider who is trying to find a place for herself in the group, just as her family was trying to do it in their neighborhood. Tiffany is a smart, confident person who is not afraid to take the lead and call out people for their mistakes. Both of them are concerned over their collective state of affairs, but we don’t see them bonding in the way that KJ and Mac do.

There is already some undercurrent in their first exchange on the show. KJ comes from a rich family, while Mac’s house is a ruin that she wishes to escape as soon as she turns eighteen. While Mac has a general disregard for everything, she is especially vocal about KJ’s rich family. This ongoing banter is reminiscent of the common but very potent opposites attract trope. Despite her apparent dislike for KJ, it is clear that Mac is drawn toward her in some way. As for KJ, she always tries to be nice to Mac, no matter how rude she might get.

Because they are still twelve years old and are figuring out who they are, amidst the whole time travel mess that they’ve landed in, it is a long shot to say that they will end up together. However, there is no denying that their friendship might develop into something more over the course of coming seasons, especially when they enter their teenage where hormones and identity crises rage. It is also evident from the fact that out of the four girls, only Mac and KJ manage to connect with each other in a way where they are closest to one another as opposed to any other dynamic in their group. The extent of it can be guessed from the fact that Mac chooses to divulge the information about her future to no one but KJ.

While the show is still in its early years and might take some time to develop this arc, the comic book series (on which the show is based) has explored their relationship in a detailed manner. It focuses on Mac’s homophobia, which she eventually learns to let go of when KJ tells her that she is a lesbian. Further, as their characters and relationship develop, Mac discovers that she, too, has feelings for KJ. In the end, before the story comes to an end, the two share a kiss, proving that something had been brewing between them all this while. Following this, the comics bring their story to an uncertain end. The show, however, has the opportunity to dig deeper and expand on their potential love story, and hopefully, give them a different, happier ending.

Read More: Is Mac Gay or Bisexual in Paper Girls?