Created by Stephany Folsom, Amazon Prime’s ‘Paper Girls’ is a sci-fi drama show with four twelve-year-old girls as its protagonists. Based on the comic book series of the same name, it creates a new set of rules for itself, laying the groundwork for future seasons where the scope of time traveling expands tenfold. The series offers a lot of mystery and interesting characters, leaving the audience baffled at every turn. The comics have been compared to ‘Stranger Things,’ although they are tonally and thematically very different shows.

‘Paper Girls’ also resembles the likes of ‘The Umbrella Academy’ and ‘Westworld’ regarding the variety of characters and their sense of time and space. If you are looking for more stories that offer the same things, then we’ve compiled a list for you. You can watch all of these shows similar to ‘Paper Girls’ on Netflix, Hulu, or Amazon Prime. 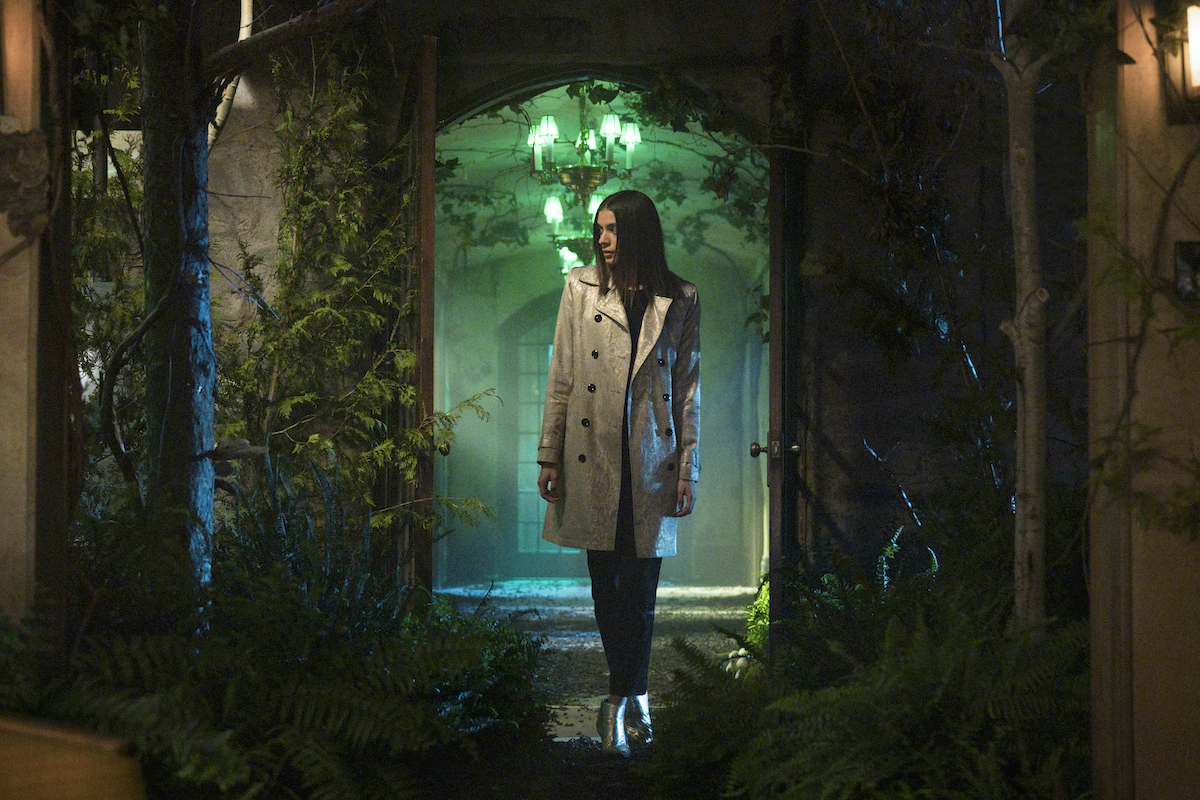 Based on Joe Hill and Gabriel Rodríguez’s eponymous books, ‘Locke and Key’ is a fantasy drama series that follows the story of three siblings who move into their family house following the death of their father. Still reeling from their loss, they discover a bunch of keys that open new doors for them; this revelation brings its own struggles while the teens learn more about their father’s past. Moreover, other people are looking for these keys, which makes the entire situation very dangerous for the kids. If you liked the mysterious air of ‘Paper Girls,’ this one will surely keep you hooked. 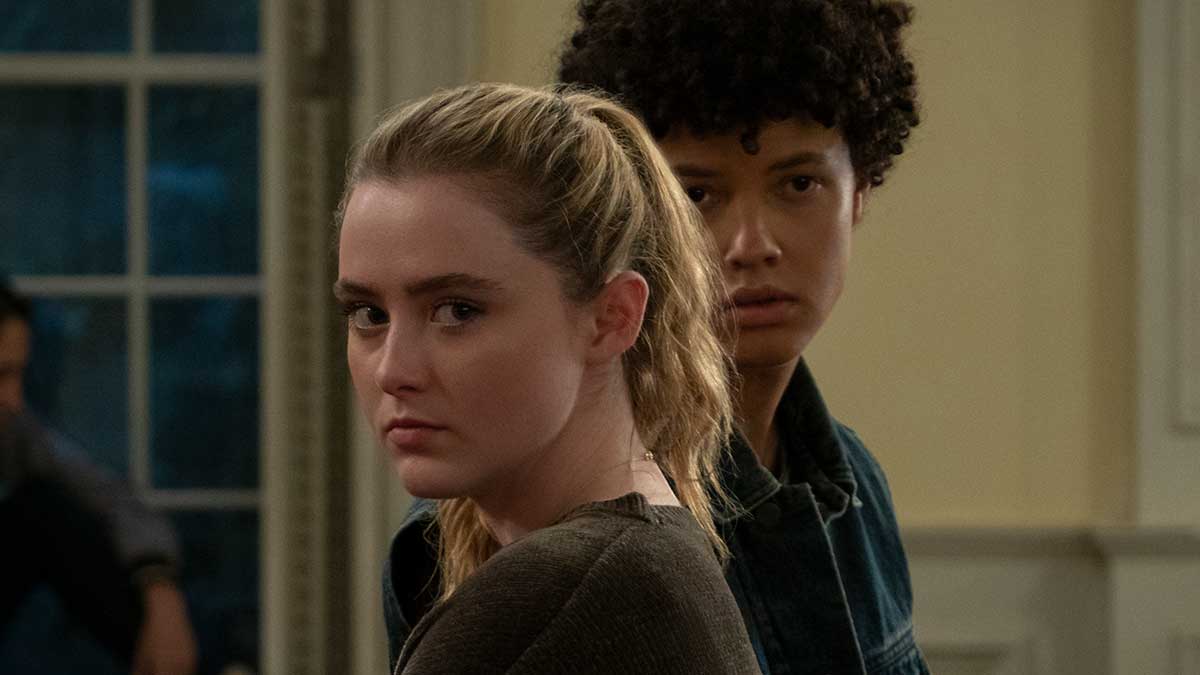 Considered a modern twist on ‘Lord of the Flies,’ ‘The Society’ is a mystery drama series that chronicles a group of teenagers stranded in their town, with no adults in sight. This leads them to create their own system of hierarchy, which reveals their true nature. The first season focuses more on the setup of the new teen society and barely touches the sci-fi element, which would have been explored in the second season if it had continued. Nonetheless, that shouldn’t stop you from exploring this brilliant series.

On the surface, ‘The Nevers’ appears to be a sci-fi series set in Victorian times. Though by the end of the first season, it creates such a twist in the narrative that you are forced to reconsider everything you thought you’d figured out about it. Much like ‘Paper Girls,’ it has a group of women at its center, focusing entirely on their place in the world and their struggles. You’ll have to pay attention while watching this one because the narrative truly expands within the last couple of episodes of season 1, which puts it in quite a similar position as the story arc of ‘Paper Girls.’ 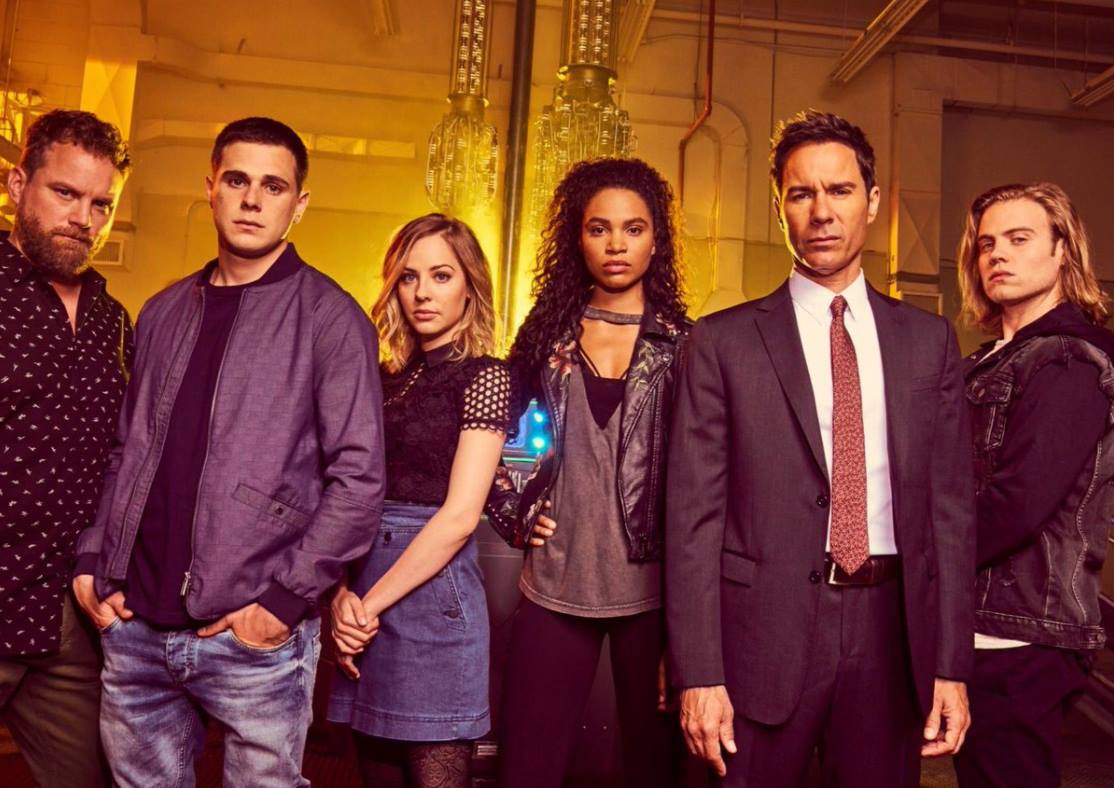 While most time travel stories focus on a person physically traveling, the sci-fi series ‘Travelers’ offers a different perspective of the situation. It has people from the future coming back to the present yet in a very different manner- instead of sending their bodies, they send their consciousness to the past. They inhabit other people’s minds and use them to work on their missions while also trying to save the world from an impending apocalypse. If you have enjoyed ‘Paper Girls,’ you will indeed be intrigued by this one. 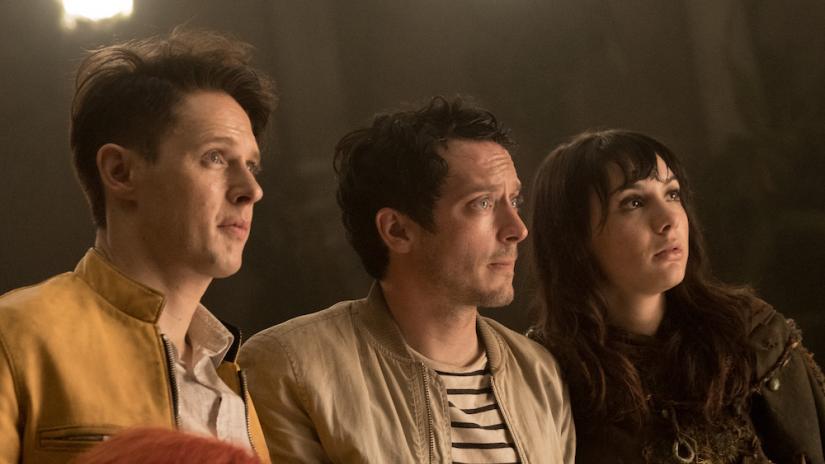 If you want time travel with a bit more quirkiness, then ‘Dirk Gently’s Holistic Detective Agency’ is the one you should watch. Based on the book series of the same name by Douglas Adams, the sci-fi detective series begins with a murder, and an investigator, more specifically, a holistic one, shows up to solve the crime. His specialty is looking into the cases that seem really weird but are actually all about the idea of things being connected to each other. With every episode, the story becomes more eccentric and fun and offers a fresh take on the sci-fi genre, just like ‘Paper Girls.’ 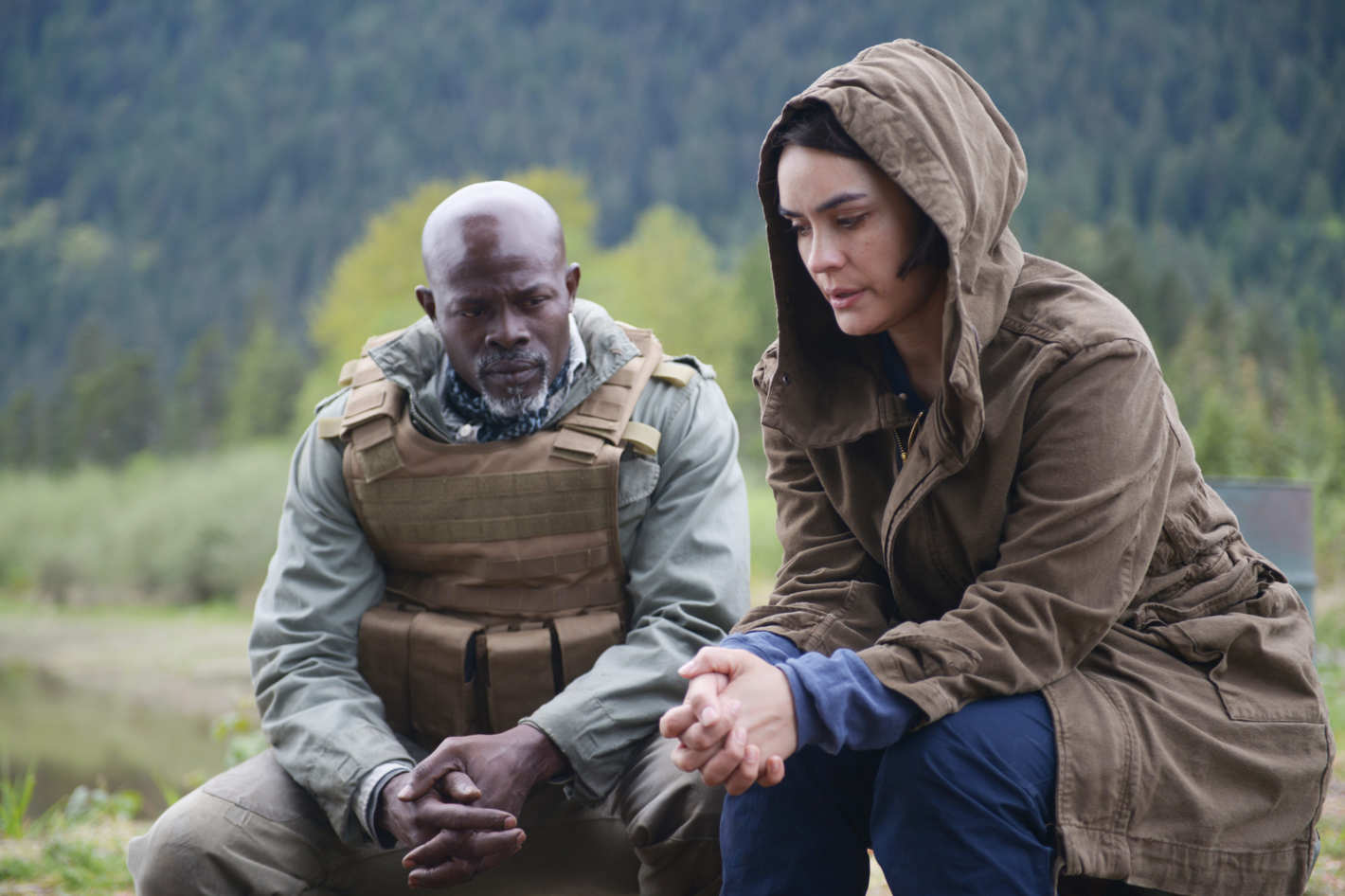 ‘Paper Girls’ follows four girls who end up in a different time with no idea how that happened to them. Now, increase the story’s scope and apply it to an entire town of people who have no idea how they ended up in a strange place full of strange things. Based on Blake Crouch’s eponymous novels, the sci-fi mystery show ‘Wayward Pines’ begins with a US Secret Service agent starting an investigation regarding the disappearance of his two colleagues. A car accident leads him to wake up in the eponymous town where the rules of the land have changed drastically. The show works as horror but has deep sci-fi leanings, keeping you glued till the end.

Do you like stories featuring preteens who can’t seem to stay in their original place and time? If so, then the fantasy drama series ‘His Dark Materials’ is the one you should jump on next after ‘Paper Girls.’ It follows a young girl named Lyra, who discovers startling things about her family and the world she lives in when she goes looking for her friend who a group of mysterious people kidnapped. Based on the book trilogy of the same name by Philip Pullman, the story mixes the elements of sci-fi with religion and portrays all the good, the bad, and the ugly from the eyes of a preteen who’s on the cusp of puberty. 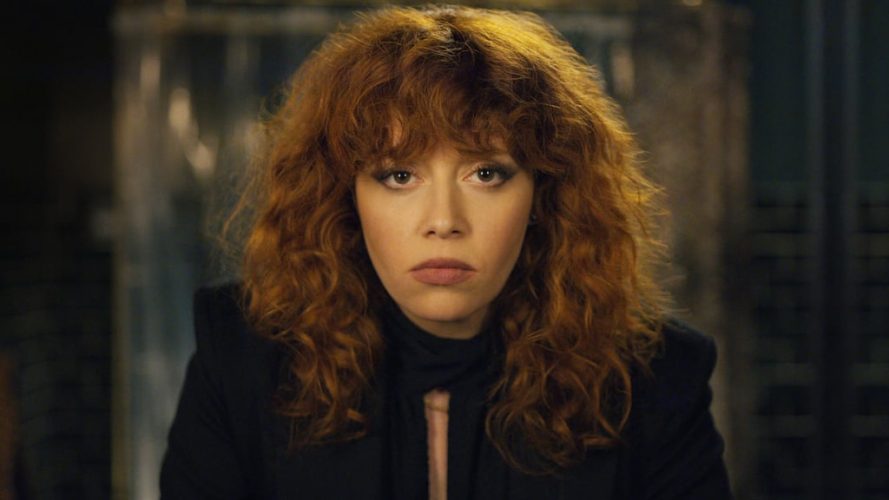 The comedy-drama series ‘Russian Doll’ is one of the most innovative sci-fi shows in recent times. It stars Natasha Lyonne in the role of Nadia Vulvokov, whose birthday party leads her on a path of self-discovery, reflection, and digging out family secrets. Time is an important factor in the story, with the first season focused on a loop and the second season centered on time travel. Family, past, and mental health drive its narrative, as more attention is paid to the emotional workings rather than a specific science to explain away the convoluted sense of time.

If you like stories that confuse and keep you on edge, then the mystery drama series ‘The OA’ is the one to watch. This brilliant show explores sci-fi themes with a hint of the supernatural and the persistent vibe of true crime. Like ‘Paper Girls,’ there are so many layers in its storytelling that the deeper you dig, the more confusing it’ll get. The series begins with the return of a girl called Prairie Johnson, who’d gone missing seven years ago. She was blind back then, but when she returns now, she seems to have recovered her sense of sight. Soon, Praire brings together a group of teenagers and a high school teacher and makes them a part of her unbelievable story. However, things only get more mind-bending from here. 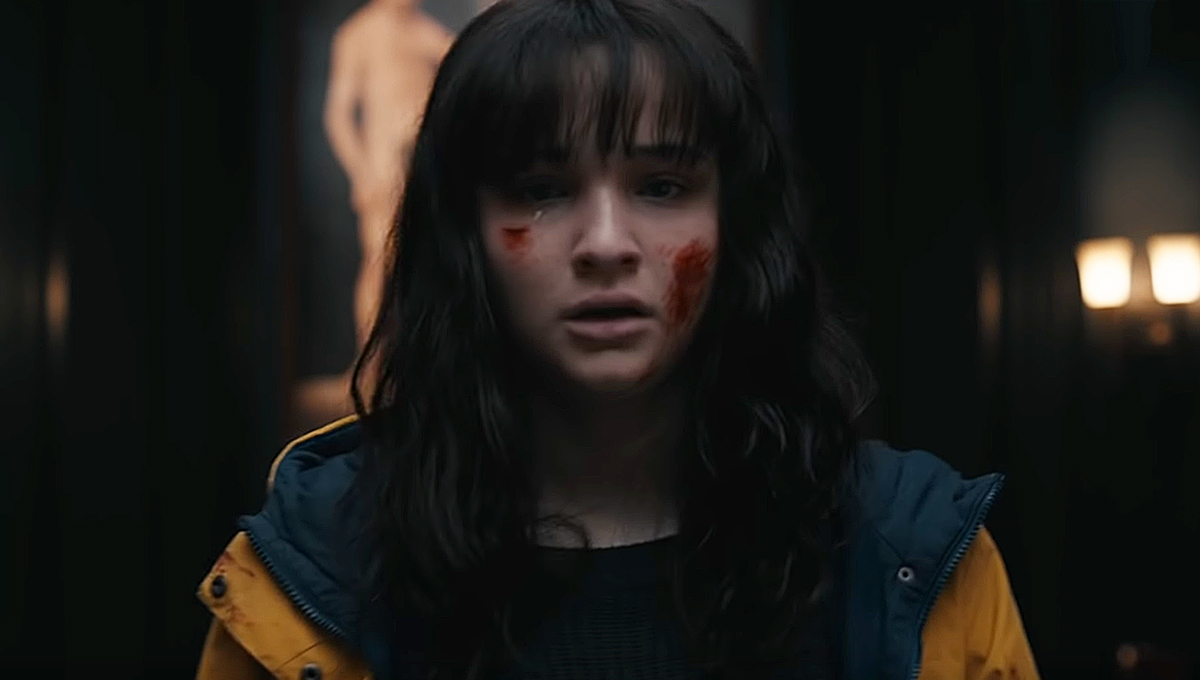 One of the best shows in the genre, ‘Dark’ is a sci-fi thriller series that takes the concept of time travel to a completely different level. With every season, it keeps adding the layers of multiple timelines to the story and creates such a complex mix of characters and their relationships with each other that if you miss even a single thread, you’ll have a tough time figuring out what actually happens. ‘Paper Girls’ too deals with a lot of back and forth in the past and the future and promises to become more layered with its upcoming seasons. To prepare for that, you should definitely spend some time in the village of Winden, where ‘Dark’ is set.