Does Emily Stay in Paris or Go Back to Chicago? Does Emily Choose Sylvie or Madeline?

‘Emily in Paris,’ created by Darren Star for Netflix, is a romantic comedy-drama that explores the American Emily Cooper’s experience of Paris. Working at Savoir, a French marketing agency owned by the American Gilbert Group, Emily faces the disdain of her coworkers for being an overenthusiastic workaholic from Chicago who doesn’t speak French. However, she soon makes friends and has romantic encounters in the beautiful City of Love.

In season 1, it is made apparent that Emily is in Paris only for a year as she’s just her boss’ replacement. Thus, Emily explores Paris with the enthusiasm of an expatriate on a long workation, knowing that a promotion and her regular life await her back in Chicago.

However, season 2 throws a bunch of professional and romantic problems at Emily, forcing her to change her long-term plans. Additionally, in the finale, her loyalties towards the two women who have shaped her career — Madeline Wheeler and Sylvie Grateau — are tested. So, does Emily say goodbye to Paris and head back to her home in Chicago? Does she ultimately side with her talented but tough love-showing French boss, Sylvie, or her overachieving but generally amicable American boss, Madeline? We’ve got the answers you need. SPOILERS AHEAD.

Does Emily Stay in Paris or Go Back to Chicago?

Throughout season 2, we see Emily reiterating the fact that she’s only going to be in Paris for a year to a bunch of people — particularly Gabriel. She initially doesn’t date Gabriel because she doesn’t want to hurt her friend’s feelings by cozying up with her ex-boyfriend. Later, Camille, unfortunately, finds out that Emily and Gabriel slept together right before he was supposed to leave for Normandy. After a bit of hostility, Camille forgives Emily but asks her to agree to a pact stating that neither of them will ever date Gabriel.

Emily doesn’t tell Gabriel about the pact; instead, she cites her year-long stay in Paris as the reason for not wanting to pursue a relationship. What’s the point of starting a serious romance when her time in Paris has an expiration date, right? Gabriel is upset but respects her decision. The two continue to have awkward romantic interactions but do not go beyond their established boundaries.

Soon, Emily starts dating Alfie, a sarcastic but charming banker from London. Just like Emily, Alfie is in Paris for a short period of time; he plans to go back to London after his work project is concluded. He is not a fan of Paris or the French but allows himself to warm up to the city and the language due to Emily’s obvious love for them.

Towards the end of the series, a heavily pregnant Madeline Wheeler comes to Paris from Chicago to conduct a routine executive check-in of Savoir. Soon, Madeline begins to express her disapproval of everything in the office — from the employees to the work culture. She begins to probe into the company’s accounts and discovers that Antoine Lambert’s Maison Lavaux has been undercharged for years. When she finds out about Sylvie’s old affair with Antoine and current affair with Erik, she balks at the Frenchwoman’s unethical mixing of business and pleasure. 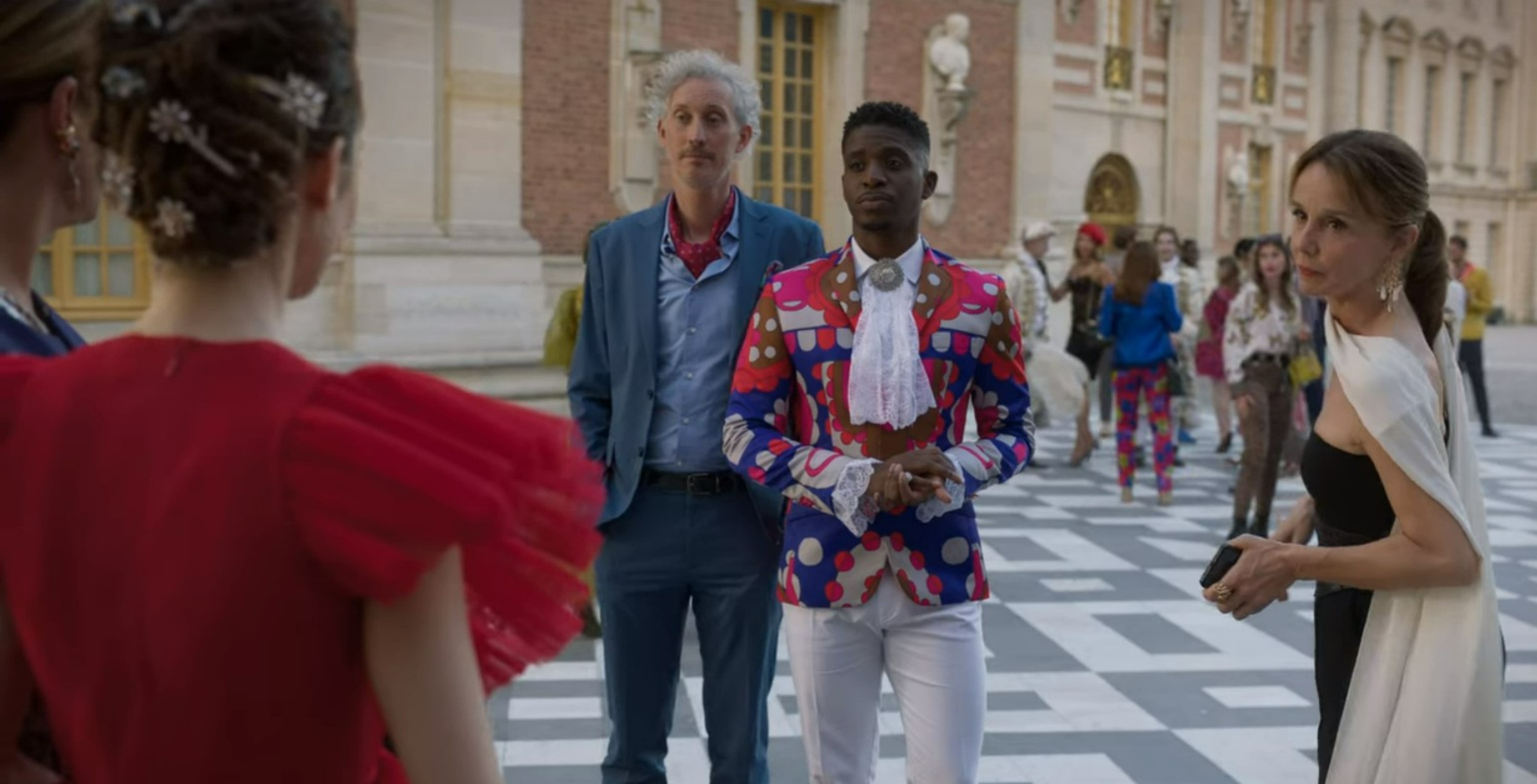 Thus, after Grégory Elliott Duprée’s Versailles Fashion Show, Madeline tells Sylvie that she’ll be up for a 360-degree review soon due to her questionable work practices. However, Sylvie resigns on the spot; Julien and Luc follow in her stead. It becomes apparent that Sylvie and the other two had plans to leave Savoir from the moment Madeline took control because they have all the paperwork ready.

However, Madeline rejoices as she doesn’t have to hand out any severance pay. Meanwhile, Emily is mortified because she loves Madeline but has also grown extremely close to Sylvie, Julien, and Luc. It’s also obvious that Madeline clearly has plans to transform Savoir into an American-style organization. All in all, it’s obvious that Emily cannot go back to Chicago anytime soon —considering the sudden developments in her professional life — and will be staying in Paris.

Does Emily Choose Sylvie or Madeline?

After Sylvie resigns, Madeline takes over the empty office of Savoir and begins to plan her next move. She is happy about Sylvie, Julien, and Luc’s departure because she can now “burn and bury” the French standards that controlled Savoir for so long. Meanwhile, Emily is feeling quite uncomfortable with how Madeline talks about her ex-coworkers because she personally respects their French style of working.

However, Madeline plans to hire a fresh team full of new people for Savoir. “I need little mounds of clay that I can mold into the exact team I want,” she says to Emily, who looks distressed. “It’s so much easier when you get them young, you know?” It’s obvious that Madeline’s method of working is a red flag to Emily, but the younger woman can’t go against the boss she has known and loved for years.

Then, Madeline says, “I need more of you [Emily], but not too many.” This makes it obvious that, although she cares for Emily, she sees her as nothing more than her puppet. Moreover, she starts handing out duties associated with an assistant to Emily; the older woman casually acknowledges that it’s a temporary arrangement below Emily’s paygrade that will ultimately end in a big promotion back in Chicago. She even asks Emily to make her tea! For the time being, it’s clear that Emily has to “indefinitely” be in Paris.

Afterward, Emily is invited to lunch by Sylvie, Julien, and Luc. Sylvie then reveals to her why they didn’t inform Emily about their resignation earlier — the young American would have tried to fix things and look for a solution. Then, Sylvie informs Emily that she’s starting her own company using the funds she got by selling her nightclub shares to her husband, Laurent G. As a surprised Emily looks on, Sylvie offers her a place on her team, which already has the likes of Pierre Cadault as clients.

Julien and Vic too emphasize that they want Emily to be a part of their new venture. Luc also tells her that Grégory Elliott Duprée is willing to become their client if Emily joins them. “I know you have a life back in Chicago, but we’re offering you one here,” says Sylvie, who’s clearly appreciative of Emily’s talent and skills. Emily is delighted by the news but also in a dilemma.

At this point, we have to remember that Emily promised Alfie that she would try out a long-distance relationship with him. However, later, because of a conversation with Mindy, Emily decides to tell Gabriel the truth about her love for him. She even mentions how she has stopped seeing Paris as a detour and has started seeing it as her life. However, Emily’s half-completed confession doesn’t amount to much because a heartbroken Gabriel is now in a live-in relationship with Camille.

In the final scene, we see a weeping Emily calling Sylvie. “Hi, Sylvie, it’s me. I’ve made my decision,” she says. Prior to the Gabriel fiasco, we expected Emily to immediately leave Madeline and join Sylvie’s team. However, after her heartbreak, it seems as though Emily will want to stick to Madeline and an environment she is familiar with. We know Emily likes structure and organization (American style!) even though she has come to love the French work culture. Anyway, what’s confirmed is that Emily will continue to stay in Paris — for both work (be it Sylvie or Madeline) and love (be it Alfie or Gabriel).

Thus the second season’s cliffhanger ending makes us think that Emily will choose Madeline for at least some time before shifting over to Sylvie. It is also possible that Emily will make Madeline see the error of her ways. However, it seems as though that could take a while. Emily will probably slog at Savior under Madeline’s leadership for a bit before she gets the emotional strength to break away (from the promotion as well) and go to Sylvie, Julien, and Luc, embracing a seemingly permanent life in Paris in the process. Of course, it is clear that her professional decisions will get impacted by her romantic fate.