Does Marry Me Have a Mid-Credits or Post-Credits Scene?

Mid-credits and end-credits are generally used in franchise filmmaking, where they provide hints about where the overall narrative is heading. Sometimes, they are dedicated to pure fanservice. After the massive success of the Marvel Cinematic Universe, mid-credits and post-credits scenes have become even more prevalent. While they are not as common outside action and superhero cinema, exceptions do exist. In these types of movies, they are often used to tie in loose plot threads. ‘Marry Me’ is a wonderfully traditional romantic comedy film. If you are wondering whether it has a mid-credits or post-credits scene, this is what you need to know. SPOILERS AHEAD.

Does Marry Me Have a Mid-Credits or Post-Credits Scene?

While ‘Marry Me’ doesn’t have a post-credits scene, it does have a mid-credits scene. But it doesn’t necessarily take the plot forward. This is not that type of film. Instead, the scene explores the film’s central themes and gives some of its supporting characters happy endings. ‘Marry Me’ stars Jennifer Lopez and Owen Wilson, two of the biggest stars of all time in the romantic comedy genre. The movie is quite formulaic, but in an age when romantic comedies have become increasingly rare, the predictability of its plot has actually added to the film’s charm.

Popstar Katalina “Kat” Valdez (Lopez) finds out that her fiancé, fellow Hispanic popstar Bastian (Maluma), has cheated on her with her assistant moments before their marriage, which is about to take place in front of 20 million fans. She then proceeds to marry math teacher Charlie Gilbert (Wilson), whom she randomly chooses from the live audience. Their subsequent romance is very reminiscent of ‘Notting Hill.’ The film ends with the lead two characters reuniting after briefly separating due to circumstances. 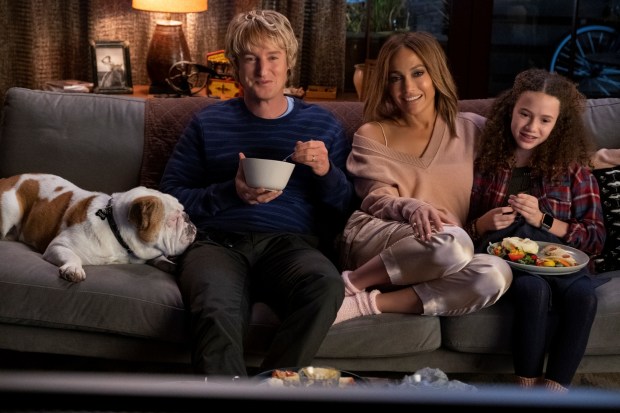 The mid-credits scene in ‘Marry Me’ is simply adorable. Snippets from Kat and Charlie’s life are shown at first. There is also what seems like an outtake in which Lopez gets genuinely startled while giving treats to the dog. With the title track playing in the background, several couples appear on the screen and speak about how they met each other. Some are from the movies, and others seem to be genuinely in relationships. Kat’s manager, Collin Calloway (John Bradley), has started dating Anikah (Jameela Jamil), who works at ‘The Tonight Show Starring Jimmy Fallon,’ while Melissa (Michelle Buteau) is in a relationship with Coach Manny (Utkarsh Ambudkar).

Collin and Anikah have apparently met at ‘The Tonight Show.’ Melissa’s first encounter with Coach Manny happened at a Mathalon. There is also an elderly couple born 81 years ago at the same hospital. The scene fittingly ends with Kat and Charlie telling the audience that they met at a concert.

Read More: Marry Me Ending, Explained: Do Kat and Charlie End Up Together? Who Wins the Mathalon?