Does Trinity Die in The Matrix Resurrections?

Trinity (Carrie-Anne Moss) has always been a fascinating character. She is a perfect balance of vulnerability and strength and has as many iconic moments in the first three ‘Matrix’ movies as Neo. In ‘The Matrix Resurrections,’ she is more important to the narrative than ever before. After the events depicted in ‘The Matrix Revolutions’ — in which both she and Neo die — the Analyst, the creator of the most recent version of the Matrix, gathers her and Neo’s bodies and puts them in the resurrection pods called the Anomaleum. He made an interesting discovery.

Alone, they’re not worth much. And if they bond, dangerous things happen. However, if he keeps them apart but close to each other, it produces unprecedented results. The Analyst’s findings with Neo and Trinity became the foundation of his Matrix, in which he has trapped both of them. If you are wondering whether Trinity survives at the end of ‘The Matrix Resurrections,’ we’ve got you covered. SPOILERS AHEAD.

Does Trinity Die in The Matrix Resurrections?

No, Trinity doesn’t die in ‘The Matrix Resurrections.’ She is initially trapped in the Matrix as Tiffany, a suburban woman who has a husband and three children. While she is entrenched in the reality that the Analyst created for her, her real self bleeds through from time to time. This is why she has a motorcycle shop. Unbeknownst to her, the Analyst has surrounded her with bots. They look and behave like ordinary humans. But when they get activated, they do the Analyst’s bidding. Both her husband and her business partner are such bots.

After Tiffany learns about the games that Thomas developed, she sees the similarities between herself and Trinity. There is longing between the two of them, a manifestation of the desire to have something and yet fearing the prospect of losing what they already possess. The Analyst’s new Matrix produces energy from these emotions.

While he is extracted from his pod, Neo notices that Trinity is there as well. He later convinces his rescuers to come with him as he goes to speak to Trinity. This is when the Analyst shows up once more, stops time in the same way that Neo does, and threatens him that if Neo doesn’t surrender and go back into his pod, he will kill Trinity.

Eventually, Neo gets the help of Niobe, who is now significantly older and a general; Sati, the exile program whom Neo met before along with her parents; his rescuers; their machine collaborators; and other residents of the new human city of Io. Neo goes inside the Matrix to meet with the Analyst, while Morpheus, Bugs, and Sati extract Trinity from the pod. While pulling her to the real world this way doesn’t require her to take a red pill, it still needs to be her choice. 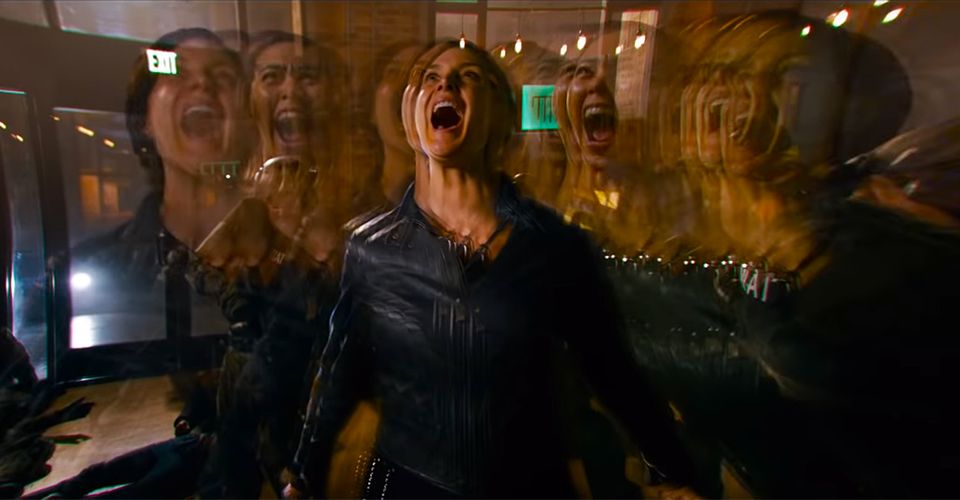 After Trinity is called to the meeting between Neo and the Analyst, she initially chooses her family. But her husband repeatedly calling her Tiffany triggers something within her, and she remembers. With the surprise help of Smith, she and Neo survive. The film reveals that the two of them are part of the One. Neither is what they are destined to be without the other. Trinity learns to fly first and gets herself and Neo to safety. The film ends as they visit the Analyst and tell him they will remake the world, warning him to stay out of their way.

Read More: Does Neo Die in The Matrix Resurrections?